AN UNSUCCESSFUL ENDING TO A RESCUE ATTEMPT 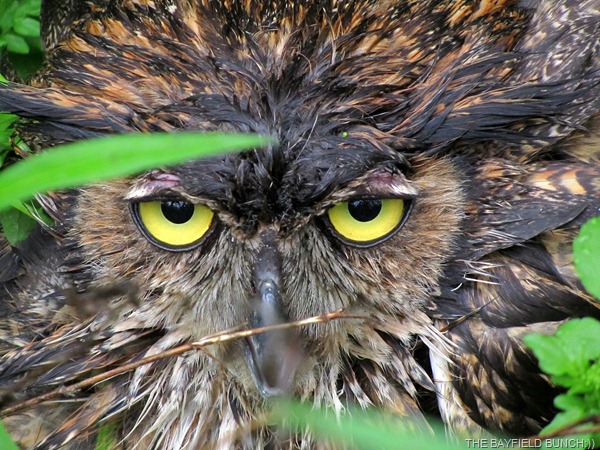 TRY AS I DID, I WAS UNABLE TO HELP THIS GREAT HORNED OWL THIS MORNING

It was the wee quiet hours of morn when I sat comfortably in my recliner chair beside the open patio door listening to a warm rain. I could see by the light of our driveway lamp post a slight mist hanging in the boughs of the Pine trees.   The air was still & dark except for a few rolls of distant thunder out over the lake.   I could hear the sometimes heavy raindrops on the foliage by our deck.  Even the mornings many Songbirds were not yet awake.  I knew our rain barrel would be filled to overflowing as I pondered the days upcoming events, whatever they might be.  Little did I know that within a couple hours Kelly & I would be on another mission to save a downed Great Horned Owl. 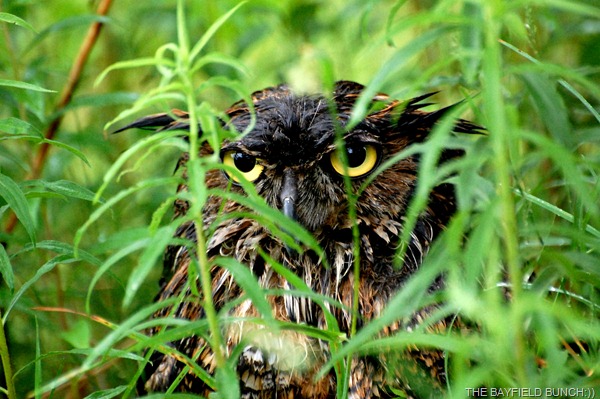 Phone rang about 8 a.m.  It was our neighbor Rita across the road saying a bunch of birds were dive bombing what appeared to be a young Owl on the ground.  Some of you long time readers may remember the same scenario happening a couple years ago almost to the exact same day when Kelly & I TRIED TO SAVE A YOUNG GREAT HORNED OWL in the same place under the same circumstances.  We ended up driving that Owl all the way to Mount Brydges just west of London Ontario but despite our best efforts & the efforts of the Wildlife staff, the young Owl died shortly after we got it there.  With a little bit of experience under our belts this time though, we felt we had a better idea of what to do & what not to do in the capture of this fellow.

I walked over to the area where the Owl was sitting while Kelly placed a call to the SALTHAVEN WILD LIFE REHABILITATION & EDUCATION CENTER .  The Owl was soaking wet from the night's rain but in a relatively safe place under a couple trees where the Crows could not get at him.  Kelly brought my camera minutes later saying the folks at Salthaven wanted a photo of the Owl before deciding what to do with it.  Kelly & Rita had earlier seen the Owl hop & flap it's wings so that was a good sign.  Brian, at Salthaven says that what sometimes happens this time of year is that a baby Owl may be a late bloomer & is left in the nest by departing parents.  The young Owl has no way of being nourished & has not learned hunting skills yet.  It tries to leave the nest & ends up on the ground. 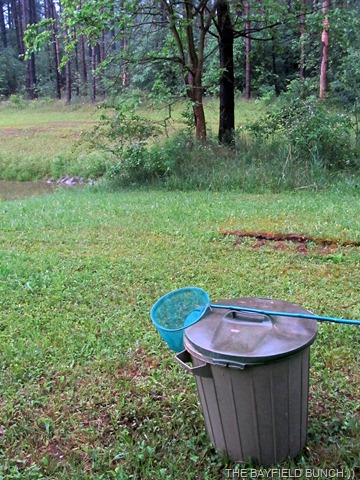 Kelly had to go to Deer Park so I checked on the Owl a few times over the next hour until I was able to get in touch with the Wildlife place again.  They said, after looking at the photos I sent, that because the very wet feathers had not shed off the rain, they felt there was probably more wrong with the Owl than what met the eye.   Said if I could catch it & bring it to Mount Brydges they would have a look at it though.  Mount Brydges is about 60 miles south of Bayfield.  Not wanting to leave the animal to just die I decided I would give it a try.  I also knew an Owl this size can do some very serious damage to a person with their sharp & powerful talons.  Put my leather motorcycle jacket on plus heavy leather gardening gloves.  I had already taken over a large plastic garbage can with a couple blankets.  The relentless yammering & harassment of Crows soon told me the Owl was still in the same place I had left him earlier.  But then, from across the pond, I saw it move out into the open.

The Crows immediately started attacking again.  The Owl tried to fly but could only get a couple feet off the ground for maybe 30 or 40 feet.  My heart sank because I didn't figure I had as good a chance to catch him now.  I approached to within about 20 feet but it fluttered into some tall grass beside a steep ravine.  As I approached closer it struggled into the air only to crash back down the steep ravine bank into heavy vegetation at the creek bottom.  The long grass & weeds were still very wet from the night's rain so the only way I could get down the slippery slope was on my backside.  Managed to get within about 7 or 8 feet of him.  He hissed at me & puffed himself up.  I had dragged the big garbage can down the bank with me as well.  Took a couple pictures with my Canon & then tried to throw the blanket over him. He easily ducked out because the long grass was in the way.  Tried again & he ducked out for a second time.   I was getting ready for a third blanket attempt when he struggled free of the weeds & through a series of hops, bounces, & flutters made it about 50 feet down the  creek into some very thick & impenetrable underbrush.  I knew at that point there was no more I could do for him.  There was no way I could crawl into that thick foliage with a creek running through it.  That was the last time I saw the little Great Horned Owl. 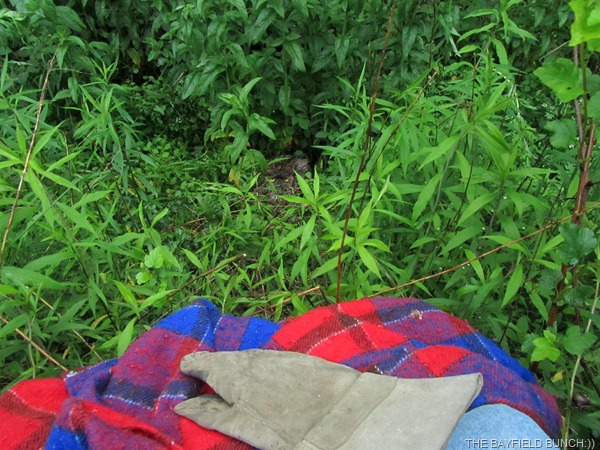 What a sad & defeated feeling it was knowing there was nothing more I could do to help this magnificently beautiful animal.  I had to tell myself it was for the best & it is Mother Nature's way of dealing with her own.  If the Owl was sick, as the Wildlife folks suggested, then that's the way it is & the way it had to be.   Walked home & brought the Jeep back to the edge of the Pine forest to pick up my stuff.  That was it.  My mission was over:((

The Owl incident took up the whole morning & I had to head for Goderich to pick up another Crestor prescription at the Walmart Pharmacy.  Loaded up the Pheebs & away we went.  While waiting for the prescription to be filled I walked over to the Supermarket & picked up a Chicken Salad sandwich to share with my little Princess.  In & out of Walmart again, gassed up the Jeep & 20 minutes later Pheebs & were on our way home.  Pheebe had missed her morning walk because of the Owl mission so her & I headed out on the trail for a quiet walk in the forest.  I couldn’t help but think about the little Owl as we ambled along the trail.  For some of us, it is always so hard to see any kind of animal in distress & suffering, but for today, I knew that was just the way it had to be this time……… 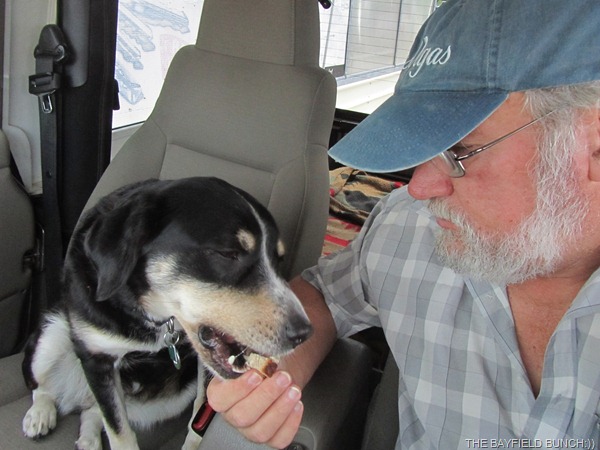 A commenter recently asked why we don't take the Motorhome out for a few days of camping in the summer. Two reasons.....Kelly works most days at Deer Park & the days she has off she likes to relax at home, catch up on some reading & run a few errands. I understand & totally agree with that. Unlike the southwest, we have no BLM (Bureau of Land Management) here so there is no free land in our area for boondocking. Just about every square foot is taken up with farm land, towns, or privately owned property. And crowded noisy summer camp grounds & RV Parks are definitely not an option for us. I simply have to content myself with short 3 & 4 hour day trips here & there in the countryside.   Another commenter asked about bugs & mosquitos on our walking trail.  Up until a couple days ago when the humidity set in, we had been bug free.  Mosquitos, Black & Deer fly's will now be a determining factor on how far & how often we walk now until the Fall.  And, Mark over at BOX CANYON BLOG recently commented, "I too suffer from "Blogger's Block" on occasion... and for some reason it's worse in the evenings so I always write early mornings while sipping coffee".  A perfectly good solution, but for me, by the time the next morning rolls around I have sometimes forgot half of what happened the day before:(( 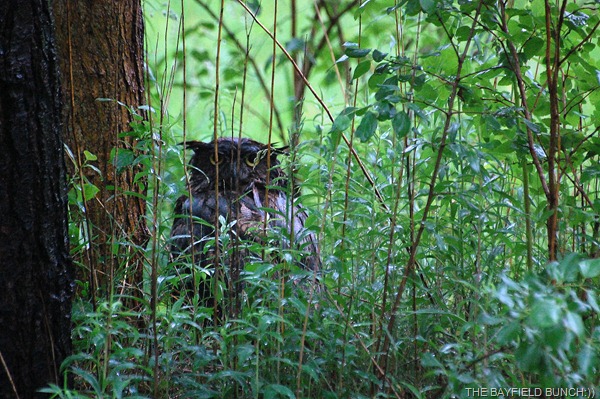 - Did you hear about the farmer you plowed his field with a steamroller?
He wanted to grow mashed potatoes!

- When I was a kid I used to pray every night for a new bike. Then I realized that the Lord doesn't work that way, so I stole a bike and asked him to forgive me.

- What does the dentist of the year get?  A little plaque

- Did you hear about the Buddhist who refused Novocain during a root canal?  His goal: transcend dental medication.