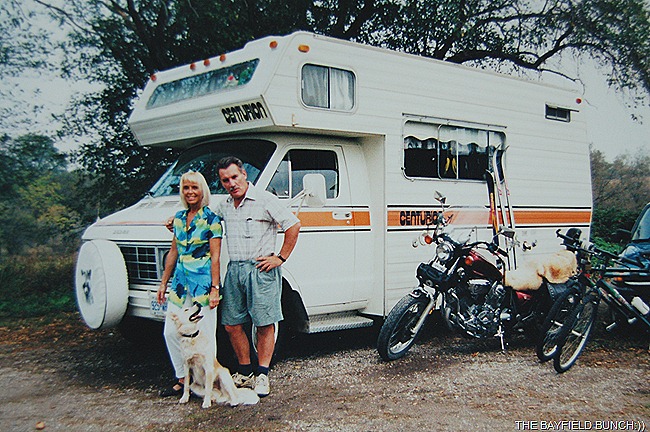 OUR FIRST RV SOMETIME IN THE LATE 90’S….1979 DODGE CENTURION….PHOTO TAKEN AT THE OLD WEENIE ROAST RANCH NEAR FULLARTON ONTARIO & YES, THAT WAS OUR OUR NUMBER 1 BOY MAX:))

Years ago before Kelly & I even had our first RV, we, like many other adventuress people, had a desire & a dream to travel & see this great scenic land we live in.  Kelly, in her growing independence as a young Mother (and before I knew her) had already made several daring family journeys to & from Florida.  Even living in a beach house for a time.  But, she was not one content to just sit & accept a routine & dominated housewife kind of marriage.  By the time Kelly & I met she was anxiously at a point in her life looking for a new & different lifestyle.  I sensed & admired this adventuress independent streak in her right away.  We had both met at the same crossroads of life at the very same time. (both Kelly & I were already separated before meeting) 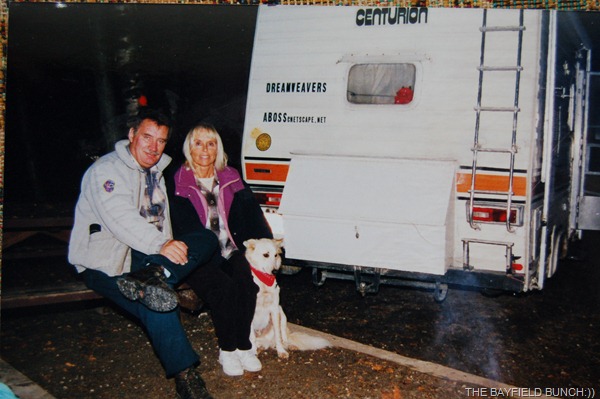 CAMPING IN THE PINERY PROVINCIAL PARK JUST SOUTH OF GRAND BEND  & NOTICE HOW IN THOSE DAYS WE CALLED OURSELVES, ‘THE DREAMWEAVERS’:))

Having traveled to, & lived on both Canada's east & west coasts I already had some travel miles & adventures under my belt.   I had been to Florida several times & as far into the southwest as Nevada &  Utah.  Washington State as well.  And, we had both been to Puerto Vallarta Mexico, but separately.  So, when Kelly & I met, we were just two independent star crossed travelers looking for, and waiting for, a chance to break away from life's humdrum routines & RV ourselves across the country.  Kelly had never seen the Southwest but just a few years after we met we were fortunate enough to fly down to Las Vegas on a 4 day junket.  We rented a car & headed off out into the desert over to Death Valley.  That dusty desert drive sealed our destiny.  That was the beginning of our realistic RV dreams & I still well remember the excitement of seeing & doing things we had never done before.  I knew that one day we would return to travel the desert roads once again. 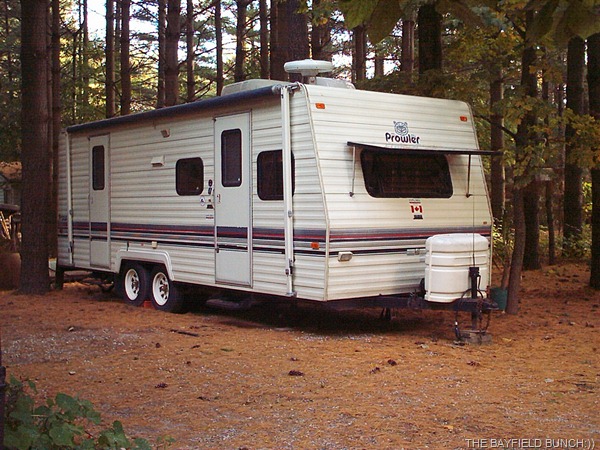 OUR SECOND RV, A PROWLER TRAVEL TRAILER
Back in those days we knew nothing about RV's, RVing, or anything to do with that kind of lifestyle.  And, at that time, that kind of a lifestyle for us was akin to planning a trip to the Moon.  We didn't have a lot of money, we didn't have the types of jobs or careers that we could someday retire from or collect fat pensions, & we certainly didn't have the patience to just sit back & accept our everyday routine lifestyle.  But, we had a dream & that's what kept our hopes alive.  We knew there was a slim chance that things might work out with a change in the future & that is what we clung to.  And, that change finally did come. 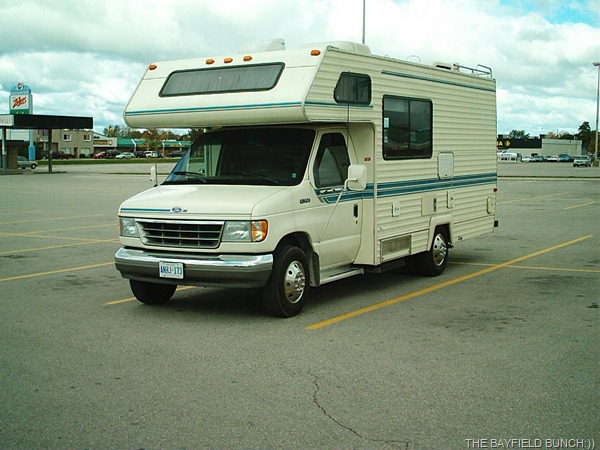 RV NUMBER 3… A FORD CLASS C CONQUEST…TOOK THIS ONE ALL THE WAY TO BIG BEND IN TEXAS & BACK IN LESS THAN 2 WEEKS…THIS RV TURNED OUT TO BE A BIT OF A BLUNDERBUS FOR US
Maybe we couldn't afford an RV in those early day but we could afford to travel around our area to the local RV shows.  It was these RV events in London & Kitchener that were instrumental in keeping our hopes alive.  We would go through every RV the show would have on display.  Didn't matter if it was a big fancy Motorhome or the latest in pop up tent trailer design.  We were interested in seeing & learning everything we could.  We also attended some of the free seminars knowledgeable RV folks were putting on.  And, this is where we first met Peggy & John McDonald from RV LIVING.NET. 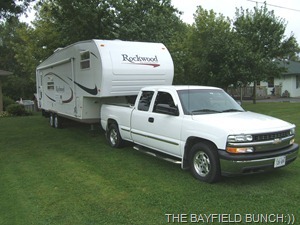 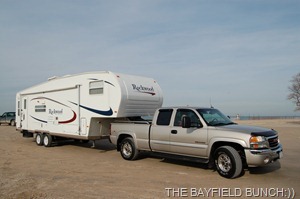 THIS ROCKWOOD 5 TH WHEEL WAS RV NUMBER 4 & IT CAME WITH THE WHITE CHEVY SILVERADO…I DIDN’T FEEL THE CHEVY WAS ENOUGH TRUCK TO PULL THE 5VER THROUGH THE SOUTHWEST MOUNTAINS SO WE TRADED IT IN RIGHT AWAY ON THE HEAVIER DUTY GMC SIERRA…NICE COMBINATION BUT TURNED OUT BE TOTALLY IMPRACTICAL FOR 2 PEOPLE & THREE DOGS.

John & Peggy were two of the main movers & shakers in the RV world back then & still are today in there 27th year of full timing.  They were on the road 24/7 even before Tioga George began writing about & bringing attention to the RV world.  They criss crossed the county year after year putting on seminars & being an integral part of RV society.  Peggy was busy figuring out computer & phone connection problems long before some of us even had computers.  She has written for Canada's RV GAZETTE for years & both her & John have been members of Canada's EXPLORER RV CLUB as well as other RV clubs in North America.  She has written some great how-to educational books & E-books about RVing & we have a copy of her first book called, SPIRIT OF THE OPEN ROAD.  It was this book that answered many of the Newbie questions for us.  We weren’t too computer savvy in those days so we still relied heavily on books.  I believe Peggy & John, more than any other RV couple on the Planet, have been so totally instrumental in helping countless thousands of fellow RV folks in so many ways, for so many years along the RV roads of travel.

We met Peggy at a Seminar in London Ontario one time & briefly met her & John again at an RV Park east of London about 6 years ago.  They have been spending their winters in the Rio Grand Valley lately & their summers in an RV Park northwest of Woodstock Ontario.  But, upon reading Peggy's post this morning.....all is not well & their many years of living on the open road have suddenly come to an end.  You can read Peggy's post here.... ISSUE 24 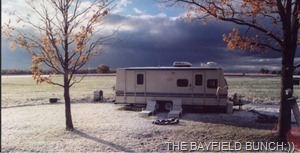 A FEW OLD MEMORIES FROM RVING DAYS GONE BY

I very coincidentally met John about 14 years ago in St. Marys Ontario one time.  It was opening day for CANADA'S BASEBALL HALL OF FAME & I was driving the St. Marys mobility bus at the time & had been called upon that Saturday to shuttle people from a lower parking lot in St. Marys up to where the ceremonies were being held.  I was sitting in the lower parking lot waiting for enough people to gather to take a load up the hill.  Kelly & I were members of the Explorer's RV Club at the time so I was reading my club affiliated RV Gazette.  A couple fellows approached the bus & came aboard.  Laid my magazine on the dash & one of the fellows spotted it right away.  He too was a member of the Explorers RV club & subscribed to the RV Gazette.  It was in fact John McDonald, a baseball fan who had traveled with his Brother-In-Law to the area that day to be a part of the Baseball Hall of Fame festivities.  It was quite a coincidence because I had seen John's picture from time to time in the magazine & here he was talking to me.  And now, 14 years later, I read  where John is probably now in for the fight of his life.  We at the Bayfield Bunch wish you all the best John................ 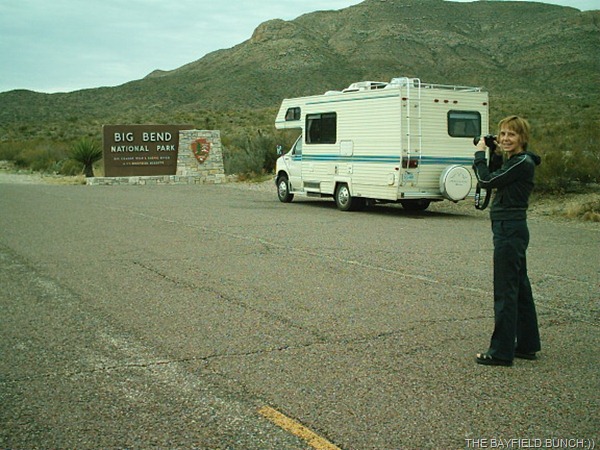 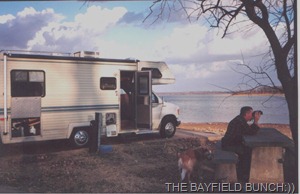 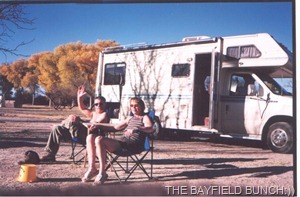 Not much happening today.  Continued my clean-up & tree trimming at one of Deer Park’s properties in Bayfield.  One more trip & I should have that job finished.  We took little miss Happy Buns over to our Zurich Vet today to have her nails trimmed.  Neither Kelly or I have ever been able to get our heads wrapped around trimming doggy nails.  Silly, I know.  Weatherman says we have a 3 day heat wave descending on us so that sounds like a few ‘inside’ A/C days coming up for this guy.  Hate that miserable humidity!! 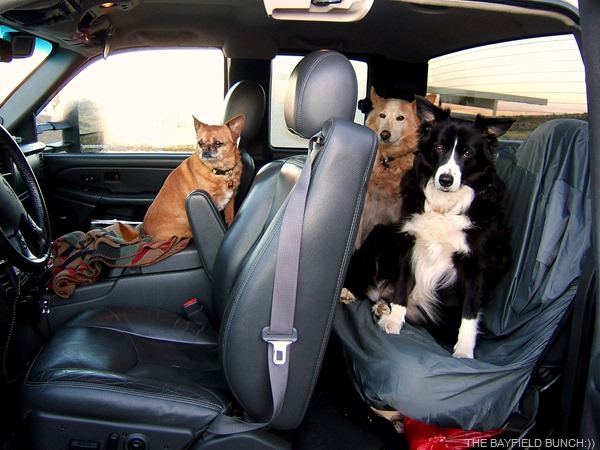 GROANER’S CORNER:((       The McFalls were shown into the dentist's office, where Mr. McFall made it clear he was in a big hurry. "No fancy stuff, Doctor," he ordered. "No gas or needles or any of that stuff. Just pull the tooth and get it over with." "I wish more of my patients were as stoic as you," said the dentist admiringly. "Now, which tooth is it?" Mr. McFall turned to his wife Pat. "Show him your tooth, Honey."