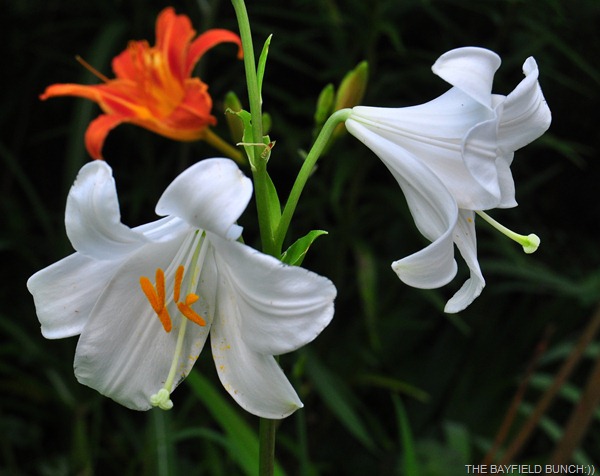 Had to ride the Motorcycle in my pyjamas this morning.  About 6 a.m. I clicked on our live weather radar map & saw we had a band of rain coming in over the lake heading straight for us.  My motorcycle was sitting outside so I had to quickly hustle out, fire it up & ride the short distance into the protection of the carport.  And, wouldn't you know it, aside from a few scattered drops, the rain came ashore to the north & totally missed us anyway.  Needless to say, I scrapped my Sunday morning bike ride plans because of cooler temps & overcast gray threatening skies. 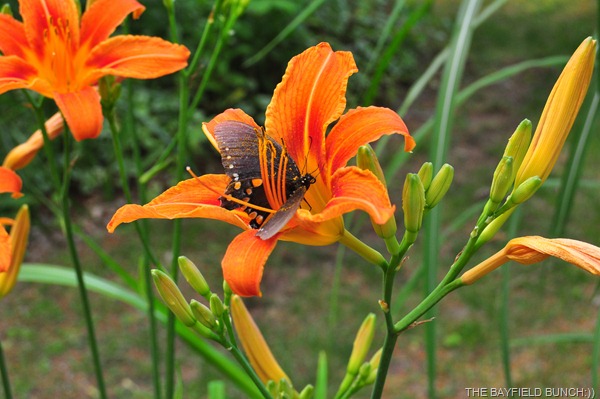 SPOTTED THIS BLACK SWALLOWTAIL BUTTERFLY IN THE DAY LILY

Needed a few photos for tonight’s post so I slipped out into the front yard with my D90 & spotted a couple of white Lilies.  While taking a few photos I happened to glance at an orange Day Lily just to my left.  In the flower of that orange Lily rested a motionless Black Swallowtail Butterfly.  I quickly took a couple photos & it never moved.  Noticed it’s right wing appeared to be caught on the Lily stamens.  Gently touched the Butterfly & it flickered to life, but try as it may it could not free itself.  Carefully slipped my pen underneath him/her & softly lifted the Swallowtail free of the stamens.  It weakly fluttered & landed on my pants.  Another photo while it gained some strength & then it lifted off, flew a short distance & came down on the road.  Oh dear, can’t leave the little fellow on the road so I was able to gently coax him onto my finger.  Slowly lifted my hand high into the air & from there he was able to flutter up, gain a bit of altitude & strength, & land comfortably in a Sumac tree.  Wished the little guy all the best & with a smile on my face slowly headed back into the house.  That little 5 minute incident just picked up my whole day:))))))))))))) 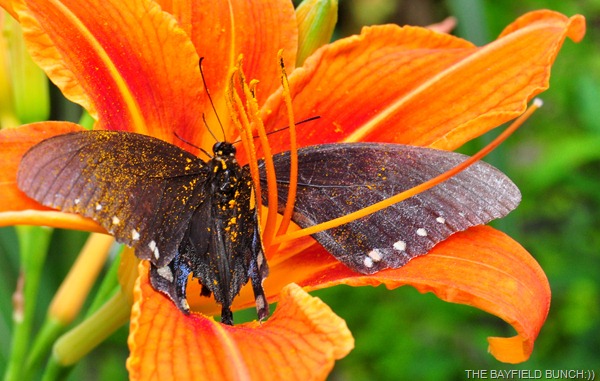 Enjoyed talking about our Arizona house on our quiet forest walk this morning.  I knew once we arrived back in Canada this past Spring that after awhile our recently acquired property & house would gradually fade from our memories & we would begin to question our house buying decision of last March.  I see that as a normal reaction & concern considering we were only able to spend about 3 weeks there nearly 3 months ago.  I know that in the fall we will be chomping at the bit to get ourselves back down to Congress Arizona again & pick up right where we left off at the end of March.  In fact, I got myself so geared up this afternoon I rolled my Google Earth plane out of the hanger & flew myself right down to our digs on Ghost Town Road.  Spent some enjoyable time flying over our house & property and around the neighborhood.  Flew over our two old boondocking sites just south of the Escapee's North Ranch too.  Awww yes, all the pleasant memories we had made in such a short time just came a rolling right back in.  And no, you do not need a pilot’s license to fly the Google Earth plane over populated areas:)) 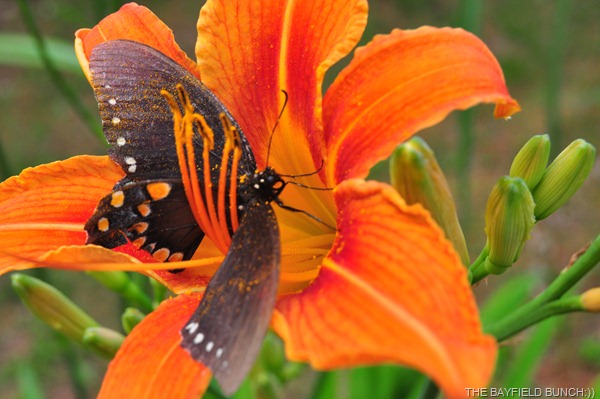 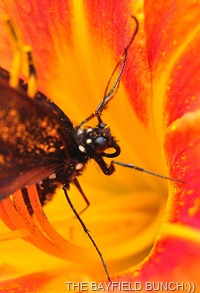 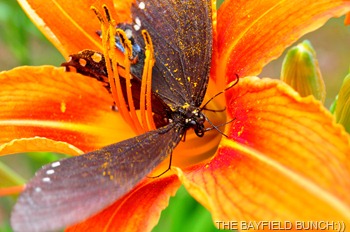 I know we will be excited & happy to have our creative house project once again under way.   Kinda looking forward to having another go at finishing up those colorful but pesky kitchen cabinets:))  And I am so looking forward to interspersing our house project with side trips to surrounding areas like Sedona & maybe a swing down through Darby Wells to Cochise County.  Perhaps a trip up to see some folks near Placerville California.  And hopefully my annual trek up Ghost Mountain to spend a little quiet time at the Marshal South homestead.  Borrego Springs is only a short 300 mile half day's drive from us.  We can be in Yuma in 4 hours at only 223 miles.  Quartzsite is less than a hundred miles west & Darby Wells is less than 150 miles away.  We can be in the beautiful red rock area of Sedona Arizona in only 3 hours.  And if we want to stand transfixed by the vastness of the Grand Canyon, we can be there in about 4 hours as well.  And, just in case we're feeling we need a shoot-out in Tombstone Arizona, a Bisbee fix, or a drop-in to see Jeanie & Ray at the Ranch, we can easily be down into that neck of the wood's in a day's drive of under 300 miles.  Yep, I think we picked us a darn good location for a home base in America's great Southwest alright & I will be sooooooooooooooooooooooo glad to get out of here & back on the road  heading west again.  We have work to do & I will be very happy to get back at it again.............10-4:)) 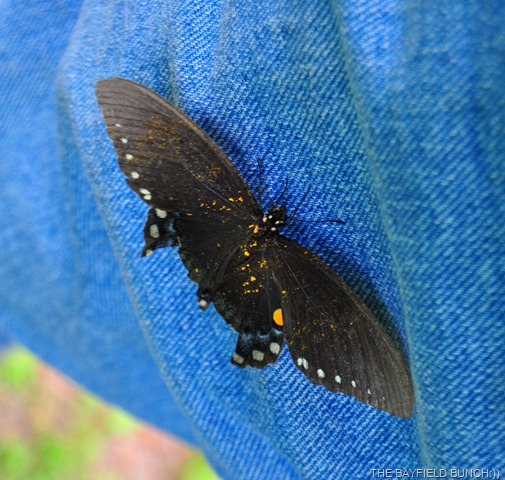 THE SWALLOWTAIL LANDS ON MY JEANS

Welcoming KEN PRATT to our Blog Followers list today.  Thanks for your interest Ken:))

Know what really bugs me.......lawn mowers, gasoline weed whackers, & leaf blowers on Sundays.  Can't we humanoids agree to be respectful enough of our fellow neighbors to at least have 'ONE' quiet day a week!!  We have a neighbor who I am absolutely convinced has some kind of strange obsession with his leaf blower.....scary!! 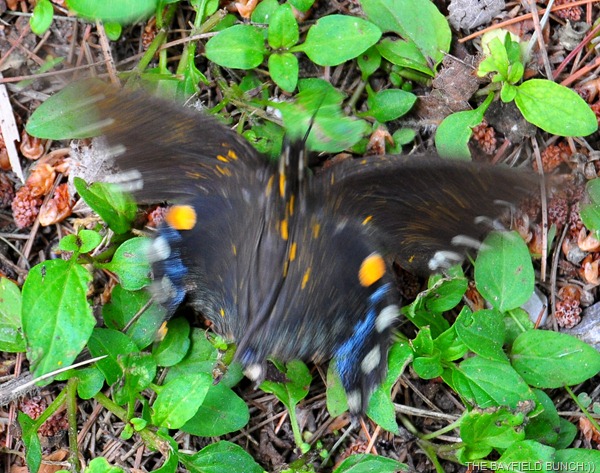 And before I forget, just want to say thank you to all the readers & fellow Bloggers for your thoughtful emails since I chose to drop our comment section last week.  No regrets:)) 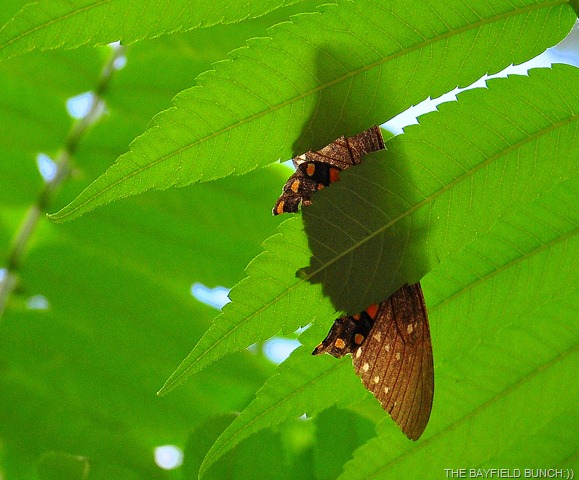 SAFELY MADE IT UP ONTO A SUMAC LEAF…….BE WELL MY LITTLE FRIEND:))

GROANER'S CORNER:((  And here is the Obituary for Common Sense:  Today we mourn the passing of a beloved old friend, Common Sense, who has been with us for many years. No one knows for sure how old he was, since
his birth records were long ago lost in bureaucratic red tape. He will be remembered as having cultivated such valuable lessons as:

Common Sense lived by simple, sound financial policies (don't spend more than you can earn) and reliable strategies (adults, not children, are in charge). His health began to deteriorate rapidly when well-intentioned but overbearing regulations were set in place. Reports of a 6-year-old boy charged with sexual harassment for kissing a classmate; teens suspended from school for using mouthwash after lunch; and a teacher fired for reprimanding an unruly student, only worsened his condition.
Common Sense lost ground when parents attacked teachers for doing the job that they themselves had failed to do in disciplining their unruly children.
It declined even further when schools were required to get parental consent to administer sun lotion or an Aspirin to a student; but could not inform parents when a student became pregnant and wanted to have an abortion.
Common Sense lost the will to live as the churches became businesses; and criminals received better treatment than their victims.
Common Sense took a beating when you couldn't defend yourself from a burglar in your own home and the burglar could sue you for assault.
Common Sense finally gave up the will to live, after a woman failed to realise that a steaming cup of coffee was hot. She spilled a little in her lap, and was promptly awarded a huge settlement.
Common Sense was preceded in death, by his parents, Truth and Trust, by his wife, Discretion, by his daughter, Responsibility, and by his son, Reason.
He is survived by his 4 stepbrothers: Not many attended his funeral because so few realized he was gone.
---------------------------------------------------------------------------
- Tourists see the world, travelers  experience it.
- Home is where your pet is:))
- "If having a soul means being able to feel
love and loyalty and gratitude, then animals
are better off than a lot of humans."
(James Herriot)
- The only thing better than right now will someday be the memories of right  now...AL.
stargeezerguy@gmail.com
Posted by Al Bossence at 6/24/2012