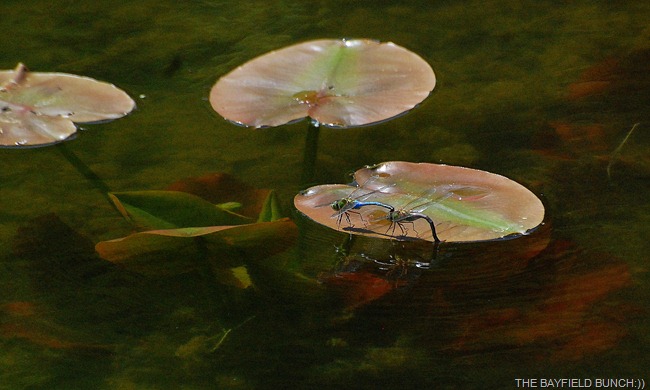 DRAGONFLIES ON A LILY PAD

Pheebs & I did find a nice piece of high ground Saturday night to watch the full Moon come up.  Only about a 10 minute drive from home, the hill was originally used for large satellite dishes & communication towers years ago.  Managed to get ourselves backed into the driveway & set up the tripod & camera.  Nice night & not cold.  Pheebs had a blast running around all over the place checking everything out. 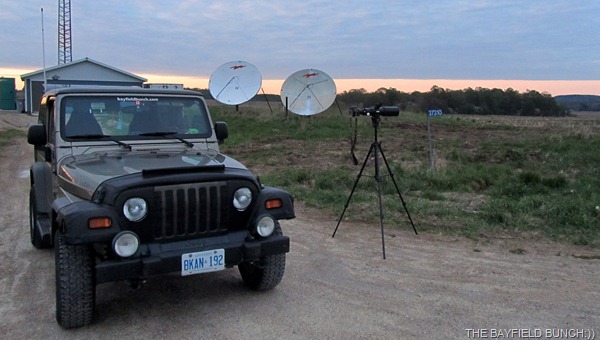 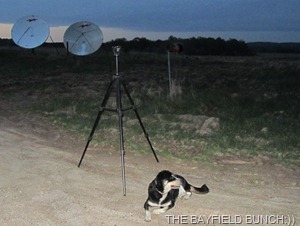 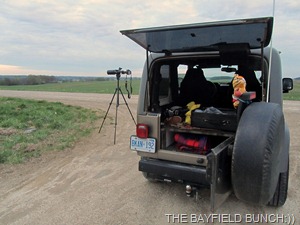 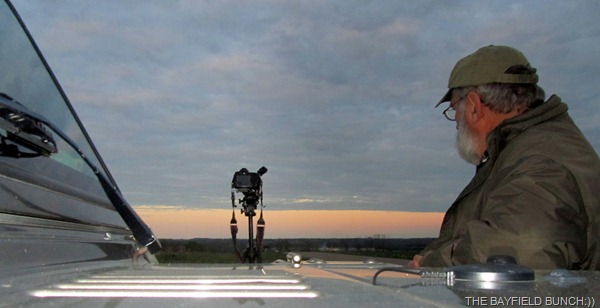 We had a moderate cloud bank overhead & the only clear sky around was low down along the horizon.  I knew I would probably have less than 10 minutes from first spotting the moon to before it disappeared into the clouds.  About 8:35 I could see a dull glow about half way up the narrow horizontal clear space.  The very faint Moon slowly began to materialize out of a hidden cloud bank close to the horizon.  Because of the low angle, the Moon was shrouded in heavy atmosphere giving it a reddish orange look.  A condensed atmosphere like that is made up of earth’s air such as dust, pollution, smoke, etc & that is why a Moon close to the horizon always has a certain amount of color to it.  A Moon straight overhead is much clearer & free of atmosphere making it whiter looking & much more detailed.  But, it was the horizon Moon I was looking for Saturday night & although not crystal clear like it would be later, I did crack off a few shots anyway. 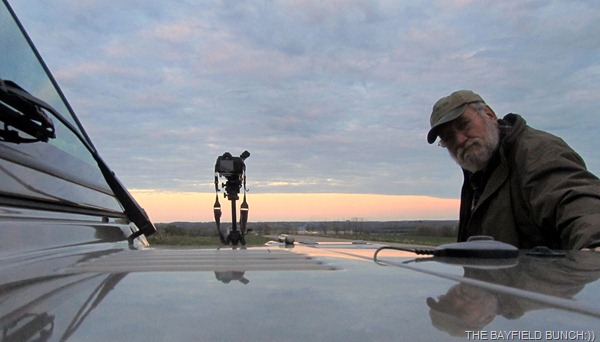 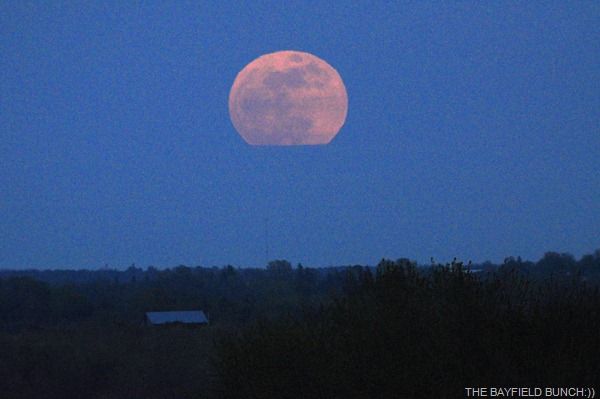 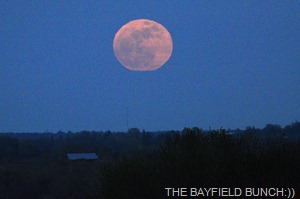 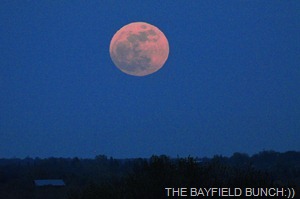 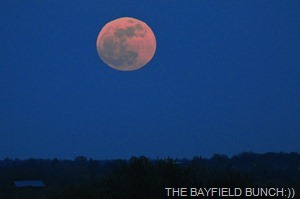 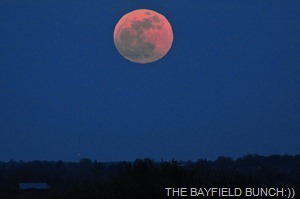 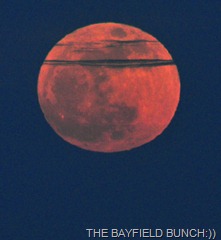 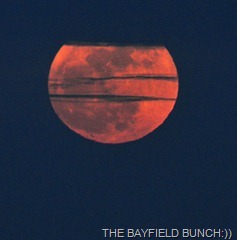 This morning dawned clear & sunny with no wind.  Tossed the cameras in the Jeep, loaded up the Pheebs & off we went on a Sunday morning errand run & photo tour.  A few things to pick up in Goderich & with a quick stop at McDonald’s for a couple Burritos (Motormouse’s favorite) we were headed back out of town onto some back country roads.  Had a spot in mind where I knew I could let the Pheebs out to explore around. 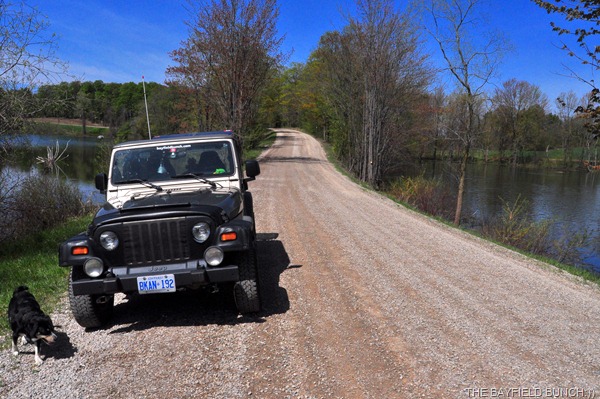 Although we do live in a small community here at the 5 Seasons Estates our Park is ideally situated right out in the country just a couple miles outside Bayfield.  When we leave our Park we do not have to drive out into the countryside, because we are already in the countryside.  And, I see that as a huge bonus to where we live.  The roadside ponds Pheebs & stopped at this morning are only a nice quiet twenty minute scenic country road drive from where we live.  Spent about half an hour poking around the Ponds & headed for home.  Pheebs was needing a big rest after all her running around chasing frogs, butterfly’s, a few fish & the occasional leaf blowing across the road.  Rest of the afternoon was spent relaxing at home. 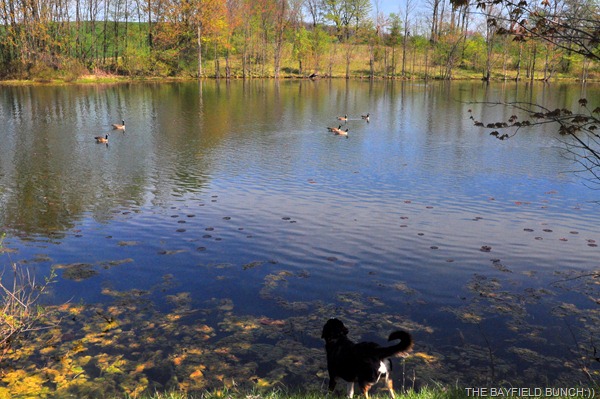 PHEEBS CHECKS OUT A GANG OF GEESE ON THE POND

Of course you are all wondering what kind of fine culinary fare I would be dining on this evening again, seeing’s how I am all by myself for a couple days.   Well, let me tell ya…..another Hungry Man dinner of course.  Steak even…..well, Salisbury steak I guess.  Straight out of the freezer & into the micro-wave.  Guess I didn’t quite nuke it long enough because I ran into a few ice bergs in the middle of the mashed potatoes.  The green beans were a little on the cold & stiff side but what the heck.  Awwww, tis quite the lap of Culinary luxury I am in I though, as I spooned up the last crumbs of my sticky but still smouldering brown Brownie. 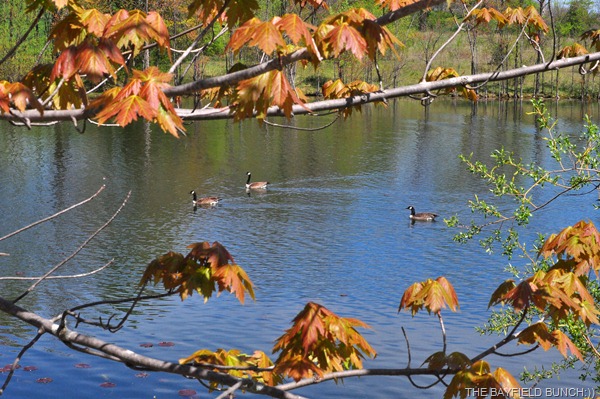 I think had we not named the Pheebs, Pheebe, we could have easily named her Shadow.  She shadows Kelly or I everywhere.  Makes me think she may have an abandonment fear.  If I move from one room to another, Pheebs is right behind me.  At night she sleeps on my bed & when I get up to go to the washroom, Pheebs gets up as well & comes & lays outside the washroom door.  And, when I go back to bed, Pheebs goes back to bed.  If by chance she falls asleep on the couch & I tip toe off to the computer room, I will hear her minutes later come racing down the hall & into the sunroom where I am seated.  She carries on like she hasn’t seen me in 6 weeks.  Of course I carry on with her the same way.  This goes on all day long.  If I go outside to get something out of the Jeep, she is at the window, & when I return to the house 40 seconds later it’s as if I’ve been gone forever.  She is just soooooo expressive with her happiness.  Now, this just doesn’t happen with me, it happens with Kelly as well & when I’m not here Pheebs sticks to Kelly like glue.  Never have I ever seen such a consistently happy dog in all my life.  Oh what I wouldn’t give for just a fraction of Pheebs personality.  My furry little shadow:)) 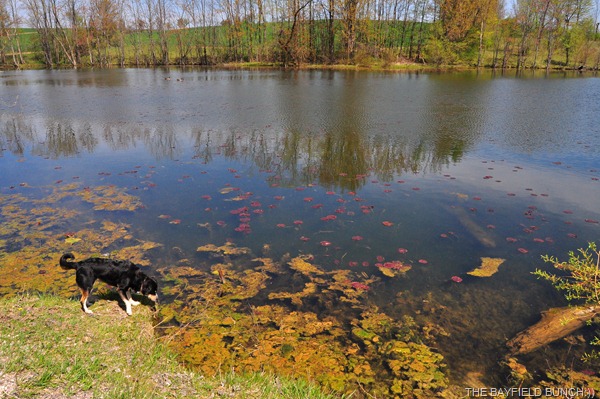 EXPLORING ALONG THE EDGE OF THE POND

A quick check of our Blog site tells me we have a new Blog Follower.  Today we welcome Theresa to our travels.  Thank you for dropping by & taking the time to sign on to our Blog Followers list.  By the way, there are no obligations whatsoever for anyone to join our Blog or any of our fellow Blogger’s sites.  Might be a little bit of a pain jumping through a few Google hoops but each & every blogger always appreciates the folks who take the time to do that. 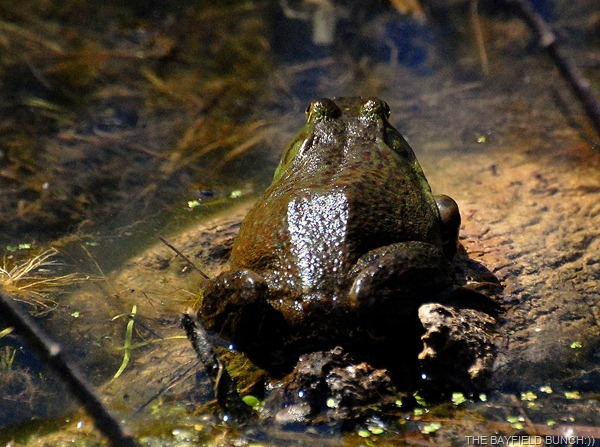 I WAS TEMPTED TO ASK THIS FELLOW IF HE WAS INTERESTED IN A GAME OF LEAP FROG…AFTER ALL, I WAS IN POSITION 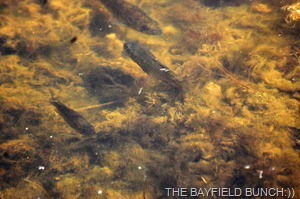 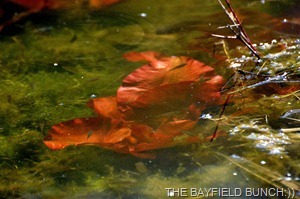 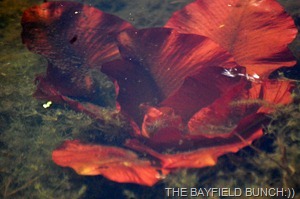 EVEN A COUPLE FISH PHOTOS ALONG WITH SOME UNDERWATER PLANT LIFE

And again, just a quick note to folks about my Facebook.  Because I have been hacked a couple times I do not accept ‘Friend Requests any more.  Nor do I sign on to any apps or requests of any kind.  No game stuff & I do not join anything.  Only thing I use Facebook for is to drop my Blog into at the end of each day. (if I can remember) Nothing personal whatsoever towards anyone.  I just do not want to get ‘hacked’ again & have to go through all that crap of trying to get the hacker out of my account.  It’s obvious Facebook isn’t going to protect me from these low life’s so I have no choice but to do it myself.  Again, for you folks sending me ‘requests’ & things, I will not respond…….nothing personal. 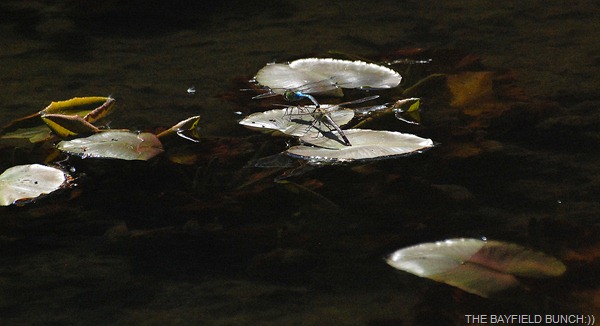 GROANER’S CORNER:((  Two zebras are talking and one asks the other, "Am I black with white stripes or white with black stripes?" The other replies, "Well I don't
know. You should pray to God about that and ask him." So that night he did
and God replied, "You are what you are." The next day he said to the other
zebra, "I still don't understand what I am because God just said, You are
what you are." The second zebra responds, "You must be white with black
stripes or else God would have said, Yo is what yo is."