WITH A LITTLE BIT OF LUCK….WE WILL BE HOME WEDNESDAY 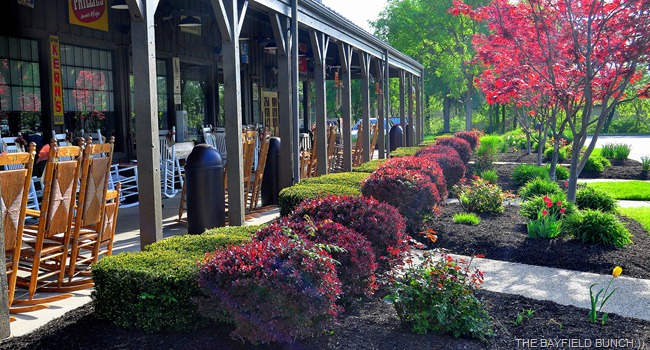 I ALWAYS NOTICE THE NICE LANDSCAPING AT ‘CRACKER BARREL’
We were parked only a matter of yards from large kitchen exhaust fans at a Cracker Barrel east of St. Louis Monday night.  Those fans ran steady & lulled me to sleep.  Guess it would explain why I dreamed of food all night.

FOGGY SUNRISE THROUGH A BUG SPLATTERED WINDSHIELD
Because we had done St Louis Missouri the night before we did not have to get up as early.  Slept in till 4:45 & rolled out of the parking lot & onto eastbound I-70 at 6 a.m.  How nice to have have all that humidity out of the air as we comfortably slid into cooler temps. 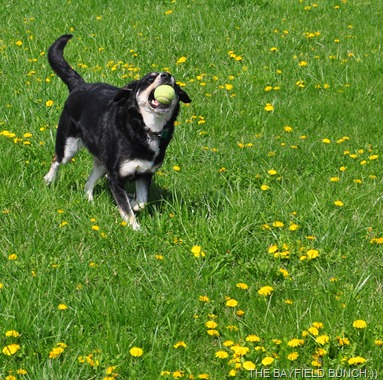 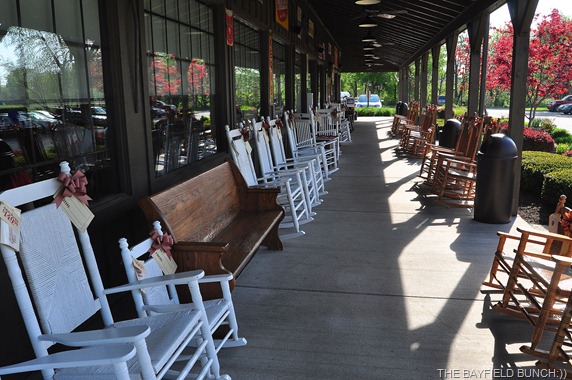 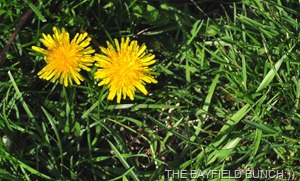 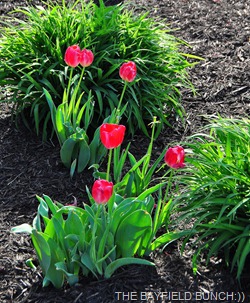 SIGNS OF SPRING AT CRACKER BARREL
I was relieved to find out the majority of construction was finally completed on the Indianapolis northwest by-pass.  It has been closed for 3 or 4 years.  We managed to slip around Indy with a minimum of trouble.  Garmin Gertie (GPS) did win another argument with me though when we differed on direction of travel…...again!!

KELLY REVELS IN THE SOFT FEELING OF THICK GROWING GRASS
Had it in the back of my mind we could maybe make Lansing Michigan today.  And, that is where this post is coming from tonight.  We are in a Lowe’s Parking lot & it’s relatively quiet.  Maybe I will dream of hammer’s & saws instead of food tonight. 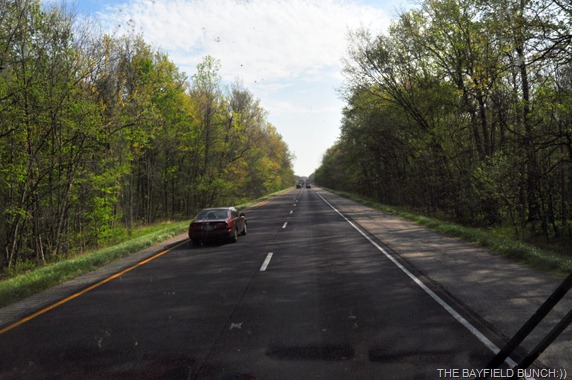 JUST GOTTA LOVE THESE NORTHERN FORESTS
With today’s nearly 500 miles we are now within striking distance of being home Wednesday.  Just 190 miles to go.  Why the hurry?   Well, there are several reasons actually, with one of them being tornados.  It’s that time of year across the Midwest & the weather can turn on a dime at any time.  Monday’s severe & unusual humidity had me worried.  If we have good weather ahead I like to take advantage of that.  Several years ago we sat out bad weather for a couple days alongside a lake down in Texas.  Another time we ran into a bad storm in Hope Arkansas with tornado warnings south of us.  As I’m typing this tonight I see on the news where the Dallas/Fort Worth area has just been struck.  We sometimes travel just north of there.
----------
There are other reasons for skipping along home too.  We put no limitations on our travel days. We have no mileage limits or a damper on our hours of travel.  No reservations to be anywhere.  We play each day as it comes.  If we have a good tail wind, roads are bare & dry, traffic is behaving itself & the rigs running good then I see no reason to pull in somewhere & spend the majority of the day sitting around watching television, reading a book or chit chatting with strangers.  We also have a very precious cargo on board that I wanted to get home as soon as possible.
----------
Plus the fact, whether day or night, I have always been, & still am, one of those people who just likes to get behind the wheel & drive.  Just as enjoyable & exciting for me now at 68 as it was when I was 15 sneaking my Step-Dad’s car out of the garage for a spin now & again.
----------
I sometimes refer to our drives between Ontario & the American Southwest as being grueling.  Well, yes it certainly is grueling at times but overall I find it all part of the exciting Snow Bird lifestyle we live.  It’s that daily boring house routine stuff I have big trouble with.  Would I like to be a truck driver?  No…..can’t imagine that at all. 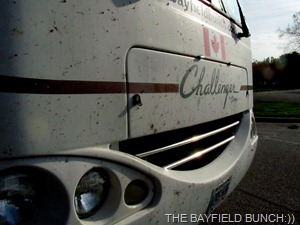 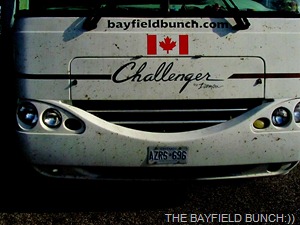 WE HAVE JUST ABOUT ENOUGH BUGS ON THE RIG NOW TO THICKEN TOMORROW’S SOUP:))
Shout out to the folks from MORIARITY New Mexico.  I do remember seeing the road sign for Moriarity as we were eastbound the other morning.  And to LYNDA & BOB who waved to us on I-40 near Amarillo Texas a couple days ago.  Yes, we saw you wildly waving & I did return some rather wild waves myself:))  Thanks for the recognition guys & safe travels on your journey across America.
----------
And a note about why we didn’t run our roof air Monday.  Just a few days ago with the generator running we turned our space heater on for 20 minutes & it blew our hard to find reset button knocking out critical systems such as our refrigerator.  Not being too technically minded we did not want to turn on the A/C & run the risk of having our power go out again.  With my luck that reset button wouldn’t reset…..and we couldn’t take the chance of our freezer defrosting!!.
----------
Kelly phoned our Vet today to say we will be bringing the little Motormouse in tomorrow.  The Vet in Zurich Ontario is right on our way home & it is the same Vet who made all the final arrangements for both Checkers & Max right from having them euthanized last April to the cremation process at an out of town facility.  Motor’s ashes will be placed in the same kind of nice Cedar Box as her two big Pals, Max & Checkers.  ‘Motormouse’ will be engraved on the top & we can pick her up next week & bring her home for the last time.  She will take her place alongside Checkers & Max.  And, in the Fall we will all be aboard traveling as a Bunch again.
----------
It is going to be a sad stop at the Vet’s carrying the little Motor in but on a happier note….this is the same Vet who phoned last August saying he knew of a dog needing a new home that we might be interested in.  We were…..and now we have the Pheebs.  And oh, what a Pheebs she is too:)))))))))))))))))))))) 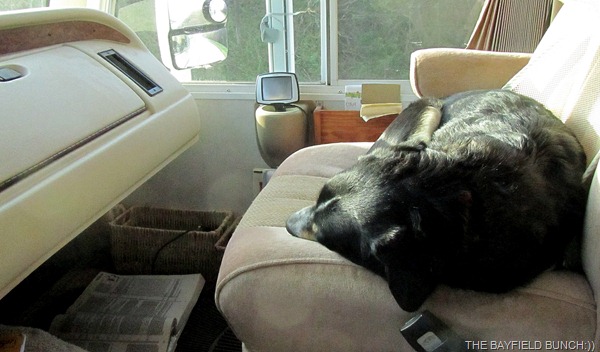