REFLECTIONS IN A MOTORCYCLE

Well, I sure misinterpreted what I thought was the Urologists urgent phone call on Monday. With the question about my kidney stone pain level, (I didn’t have any) moving my appointment ahead a day, & saying the Doctor wanted to see me right away I thought for sure my Sunday morning CT Scan had shown the Doctor something that had to be dealt with immediately. In fact, the thought crossed my mind that I just might end up in the hospital today. But, no such luck. And I say that because I would sooner have all this dealt with right now rather than later. But, later it is going to be. 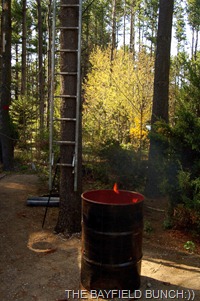 <<< NICE COOL DAY FOR BURNING UP SOME GARBAGE
Surgery is set for May 28th unless a cancellation gets me in earlier. I’m hoping. The procedure is called a Ureteroscopy & that is where they take this old garden hose & stick it…….well, it’s one of those procedures us fellers don’t care to talk about much. Anyway, a stent is put in & the stone is then blasted to bits with some kinda space age technology stuff. Well, hopefully blasted to bits. The smaller the bits the better because they have to be passed through the stent & out. No sharp edges please!! Have to return in 3 weeks to see how things are going & maybe get the stent yanked, er, carefully removed. The Urologist guy said that only takes a minute & I am already thinking that could be one minute from hell!! Yeowsers.. 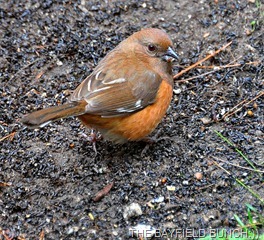 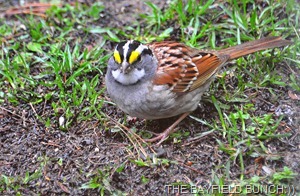 I’M SURE JUDY WILL KNOW WHAT THESE BIRDS ARE…FOR NOW I WILL JUST CALL THEM ‘FRONT YARD BIRDS’
Anyway, not to get ahead of myself here…..my next step right now is another Ultra-Sound. Had one in Tucson but a new one is needed. There are additional kidney stones in the right kidney & the Doctor will try to get those out the same time he does the big stone in the left kidney. Have to make an appointment with my own Doctor in the meantime plus a pre-op blood work appointment back in Stratford. Sure sounds like a lot of rig-ma-roll to me & we’re just about buried in paper work here already. 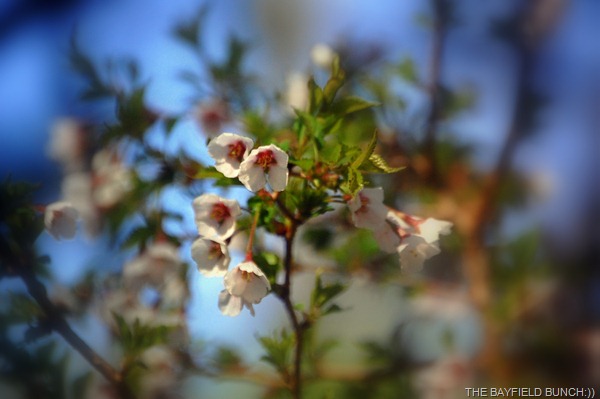 Well I know one thing for sure…..I had better not be whining & complaining about being bored this summer again. Looks like it could be an interesting few months ahead.  And, 343 to 340…….. thanks for dropping around tonight Mel:))

AND, IT WAS A NICE SUNNY DAY FOR THE TURTLES TOO
I was disappointed to find out my leg problem is not connected to my kidney stone problem. Nor is my ankle bone connected to my elbow bone….remember that song:)) Looks like I am going to have to deal with that leg problem separately. After such a bad day Monday, my legs were just about perfectly fine today. So fine in fact, if I would have had the energy I could have ran around the morning trail instead of walking around it. 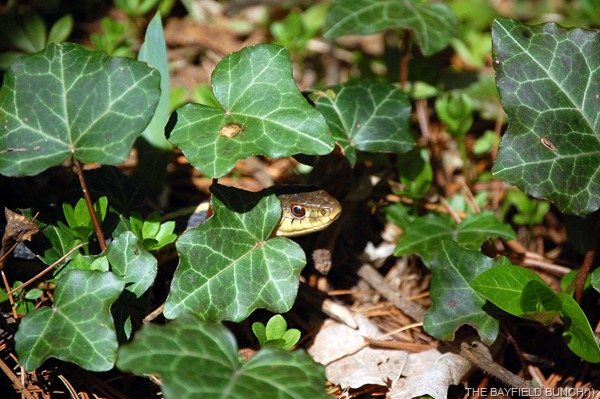 I THINK THIS LITTLE GARTER SNAKE IS A BIT SSSSSSSHY
Ok, that’s just about enough ‘General Hospital’ stuff for awhile so time to move on. Move on to what I am not sure though. Been having some pretty quiet days lately. We did stop in to see my Uncle Harry on the way to Stratford today though. We found him in the cafeteria for lunch.  He’s still doing good despite taking a tumble in his room a few days ago.  Scraped up his arm & head but he’s OK & came up swinging. Like his Doctor told him a few years ago, “Harry, you are one tough old Bird”. 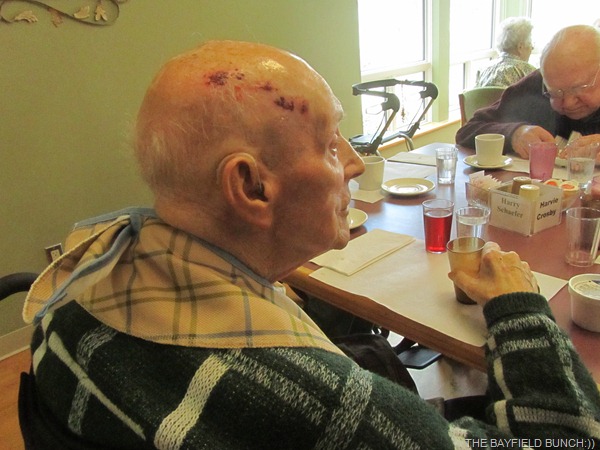 I TOLD UNCLE HARRY I HAD A SPARE MOTORCYCLE HELMUT AT HOME IF HE NEEDED IT
Cold windy day with a cloud covered morning & a sun drenched afternoon. Too cold to ride the bike but I did check the oil, coolant, & tire pressures. Also noticed much of the chrome on the bike is becoming slightly pitted because of the dampness in this climate. Long cold & damp winters in storage take their toll.  I’m thinking I should leave it in Arizona. 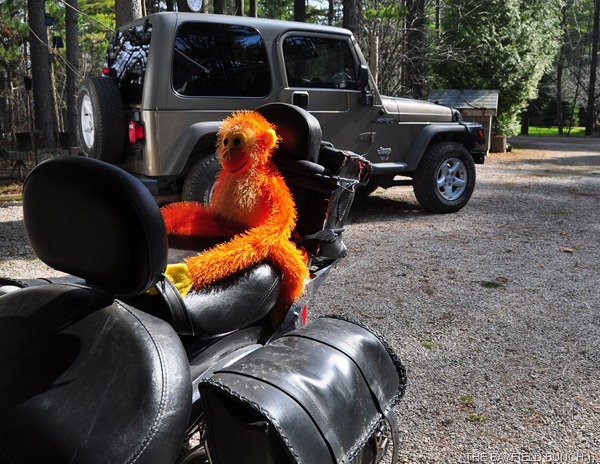 We were away about 4 hours today & aside from one of Kelly’s socks being slightly out of place, Pheebe was a real good girl again in not chewing or moving anything around. She was so excited to see us when we got home she nearly jumped right out of her fur. She is the happiest dog I have ever seen. I know they say not to make a big fuss over a dog that has ‘jumping up’ problems when first meeting them but we are just as happy to see her as she is to see us so it’s just one big happy greeting for all of us every time, regardless of how long we have been away:))

It is never a comfortable feeling inside when one of our precious Pets is not feeling well.  We have certainly experienced that feeling more than once this past year.  Mike & Gerri from A VIEW THROUGH THE LENS WITH MIKE & GERRI had their little dog Nick into the Vet after she just ‘wasn’t herself’.  Always difficult with Pets because they can’t tell us where they are hurting.  Might want to stop by & wish little Nick well.  Mike’s always has some mighty fine photos on their site as well.

Squirrels have not been my biggest problem at the bird feeders this Spring but we do have a rascally Raccoon coming in the night now & it has pulled down our main hanging feeder two nights in a row.  Kelly suggested bringing the feeders in at night so I have a big note written to myself here at the computer desk.  ‘Bring In Birdfeeders’!!  Also plan to put a piece of stovepipe around the bird station pole to stop the Racoon & Squirrels from climbing up there. 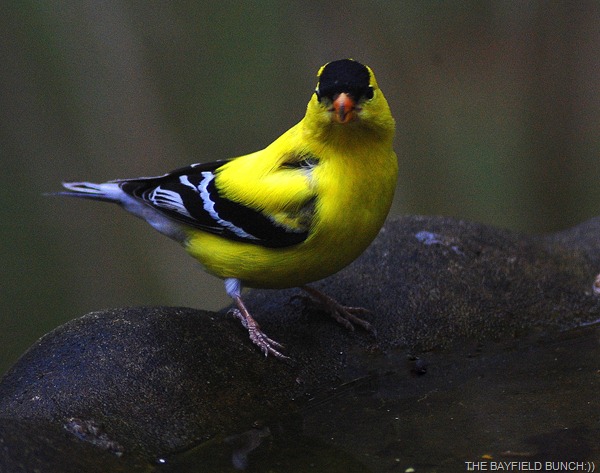 Haven’t heard from the Vet yet as to when when we can come over & pick up Motor’s cremated remains. I’m sure hoping they haven’t lost our little Beansy. Kelly, Pheebs & I are still missing her big time. It’s those quiet wee hours of the morning that are the hardest & a time when I miss all the guys the most. 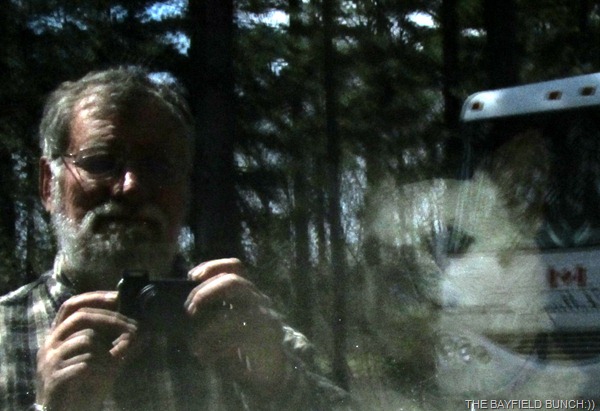 - Home is where your pet is:))
- If one's thoughts are positive about the landscape, one's eyes will appreciate what they see...AL.
- The only thing better than right now will someday be the memories of right now...AL.