OUR LITTLE MOTORMOUSE HAS GONE TO BE WITH HER OLD PALS, MAX & CHECKERS 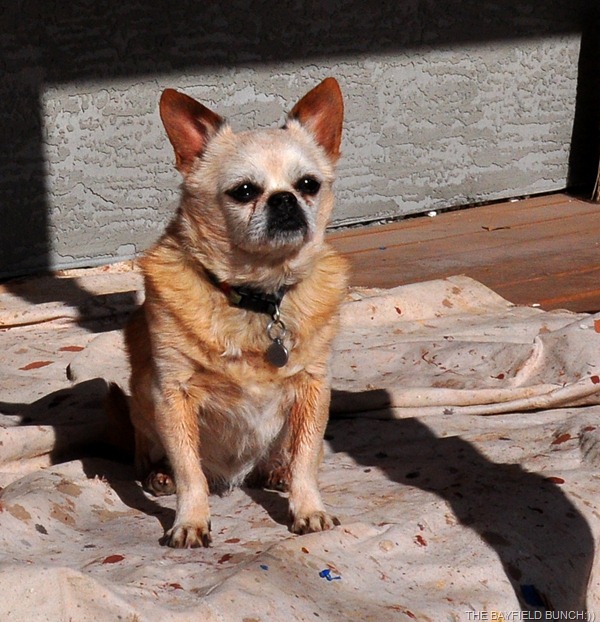 OUR LITTLE MOTORMOUSE JUST A FEW SHORT DAYS AGO

We had a feeling all day yesterday that the end was near for our little Cora.  She had thrown up half dozen times, wouldn’t eat & wouldn’t drink any water.  She was very restless, very weak & could only move a few feet before laying down.  Her legs were wobbly & she had trouble standing up.  She did not appear to be in any pain & we didn’t want to subject her to any more Vet stuff.  We felt her time was at hand & we wanted her to die quietly at home surrounded by the love of her family.  I think she knew she was dying because she didn’t die before saying goodbye.

She had been lying quietly on her bed beside her toys.  Kelly had given her a snuggle before going to bed.  I was in my chair wrapping up my computer stuff.  Motor, surprisingly got up, walked past me to the bedroom door & laid down on the rug.  We later felt she had gone to say goodbye to Kelly.  I decided not to disturb her by lifting her onto Kelly’s chair where she normally slept.  I was afraid her restlessness would cause her to fall off the chair.  Sat on my bed for a minute & Pheebs jumped up on my red chair.  I was surprised to see Motor get up & walk around the corner of the chair.  Looked like she was regaining her strength.  She walked up to Pheebs & stood looking at her just a few inches away.  She then took a few more steps & looked up at me.  I reached down & petted her as she laid down on the floor.  Talked to her softly & squiggled her ears.  She then got up & walked smartly to her water dish & stood there for a few seconds.  I then watched her walk over to one of her favorite spots under Kelly’s front passenger seat.  She disappeared under there & I was slightly hopeful she was rallying back again.  With that thought in mind I fell asleep.

I woke up around 3 with an uneasy feeling.  It was just too quiet.  Climbed out of bed, picked up my flashlight & walked over by the front passenger seat.  Saw Motor’s little brown tail sticking out so knew she was still there.  Knelt down & shone my flashlight on her.  She looked like she was sleeping but there was no movement.  When I put my hand on her I knew she was gone.  She had scampered off to be with Max & Checkers.

When Max & Checkers died last April we had them cremated & their ashes placed in a couple nice Cedar boxes with their names on top.  I brought those boxes with us on our travels this year because it gave me comfort to think they were beside my driver’s seat just like they were in all our Bayfield Bunch traveling days.  Motor died just a couple feet away from Max & Checkers.

It has always been my wish that Max, Checkers, Cora & Pheebs ashes will be mixed with mine & Kelly’s someday & scattered to the winds of travel, all together as a Bunch again.  The thoughts of burying Cora & leaving her behind was out of the question.  We had to get our little girl home where she could be cremated & take her place between her old best pals, Max & Checkers.

We had 6 days of travel ahead of us & only one way to get our little Mouse home.  We had to empty our freezer.  This may not sit well with some readers, but there are times we just have to make difficult decisions & carry them through if we are to achieve our goals, our dreams, our wishes. 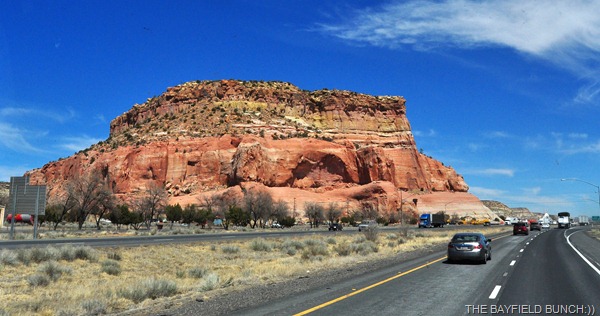 HEADING EAST ON I-40 THROUGH NEW MEXICO

Now, for today’s post……….As mentioned, our day began very early & very sadly.  We had a long journey ahead of us & it was best to get our mind’s focused on the travels ahead.  It was still dark when I waved a final farewell to the house.  A half moon surrounded by a sky full of wispy stars glinted off our newly painted roof.  It was 5:20 a.m. as we rolled the big wheels out the driveway & down the road.

Wickenburg looked like a distant string of golden pearls on the darkened Valley floor. We climbed the winding Yarnell hill into the Weaver Mountains.  We were on our way.  And we were so thankful to have our exuberantly youthful Pheebs right there between us.

Traveled in darkness through Skull Valley & it wasn’t until coming into Prescott we welcomed the first rays of a new day’s morning sun skipping over a distant mountain range & softly alighting on & lifting our Spirits. 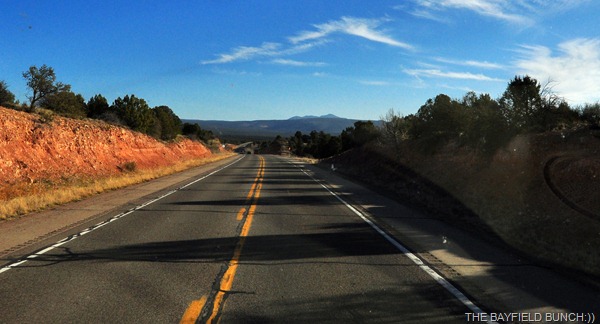 ROLLING THROUGH THE CHINO VALLEY

Hardly any traffic & the truck route around Prescott made things easier than I had anticipated.  We were soon northbound through the rolling hills of picturesque Chino Valley heading for Ash Fork on I-40.  Mentioned to Kelly that was the end of our journey’s nicest section until we cross the border at Port Huron & make that final hour & twenty minute country drive back to our home in Bayfield, Ontario.

NICE TO SEE ALL THE GREENERY SOUTH OF ASH FORK

Destination today was the Route 66 Casino parking lot just west of Albuquerque New Mexico & this is where tonight’s blog is coming to you from.  Had stayed here last year on our way home as well. 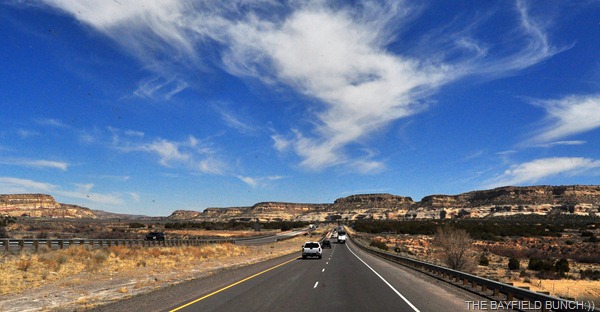 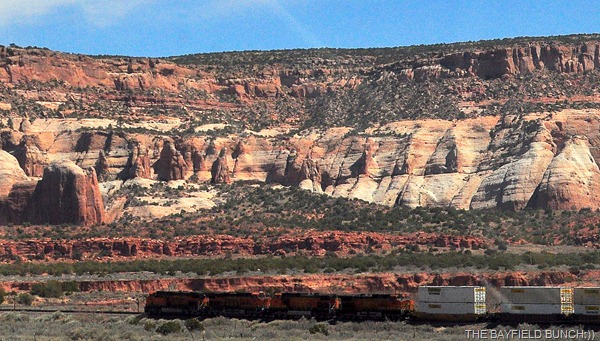 EVEN GOT ME A TRAIN FOR SAM TODAY

It was so nice to see the sweeping pine forests & snow capped mountains in the Flagstaff area.  This was old territory for us having passed through here a year ago & also back in our 07/08 trip which included both rims of the Grand Canyon. 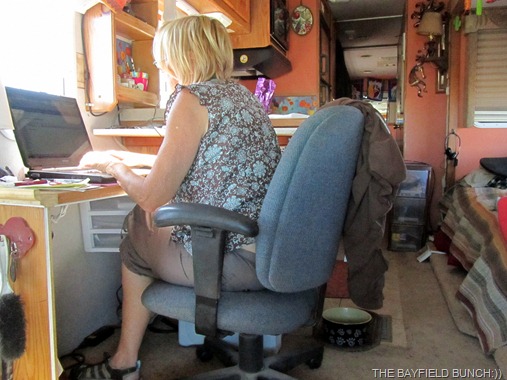 Nice new Rest Area east of Meteor Crater & I couldn’t help but think, this was our first pit stop since the Bayfield Bunch hit the road back in 06 that we didn’t have our little Motormouse out racing around checking all the new smells that only Rest Areas seem to have. 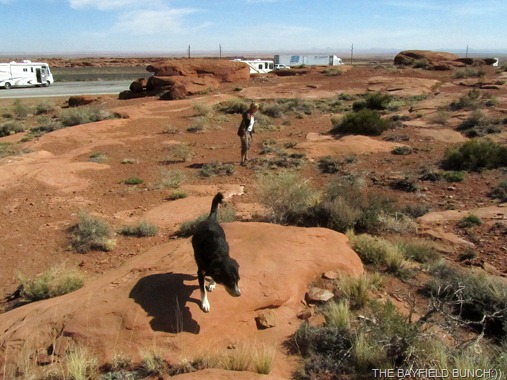 OUR FIRST PIT STOP EVER WITHOUT THE LITTLE MOTORMOUSE 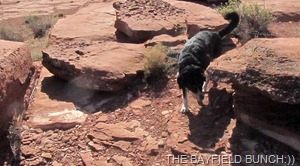 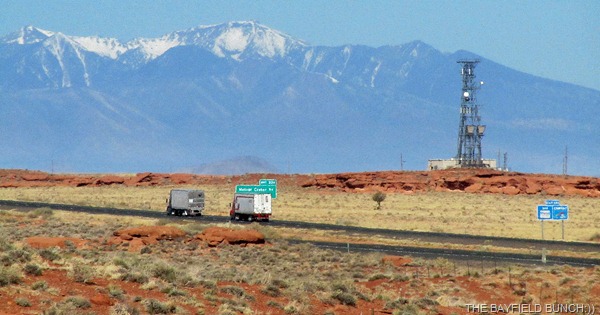 The day’s travels were rather uneventful except for a big 18 wheeler engulfed in flames on the westbound side.  That truck fire subsequently started a grass fire which began marching across the landscape.  No fire trucks on scene yet. 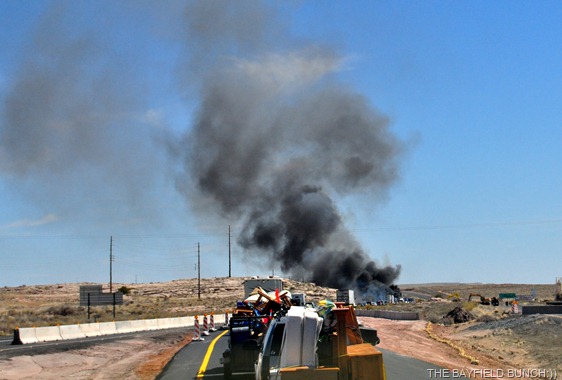 OH OH, OUR CB WARNS OF TROUBLE AHEAD 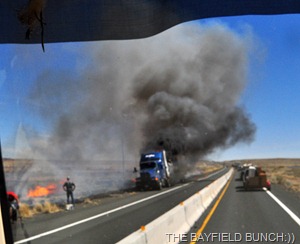 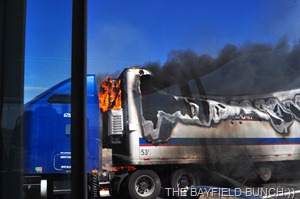 Further down the road our CB Radio crackled to life again warning east bound traffic of a truck roll over ahead blocking one lane in the west bound lanes & one on the east bound side.  We moved around the ambulance & squeaked by the overturned trailer.  Police were just getting there.  Shortly before reaching the Route 66 Casino we once again found ourselves on the end of a long traffic jam due to road construction. 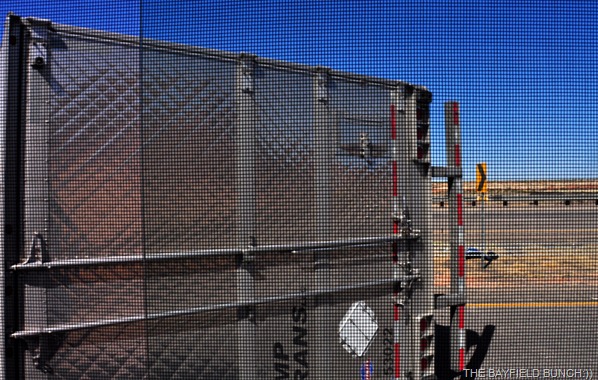 Finally reached our destination around 4 New Mexico time.  We didn’t go for a look see in the Casino because we had done a walk through last year just to see all the dazzling lights & hear all the jingling coin machines.  No, we are not Casino people.  Just like to see the razzle dazzle sometimes. 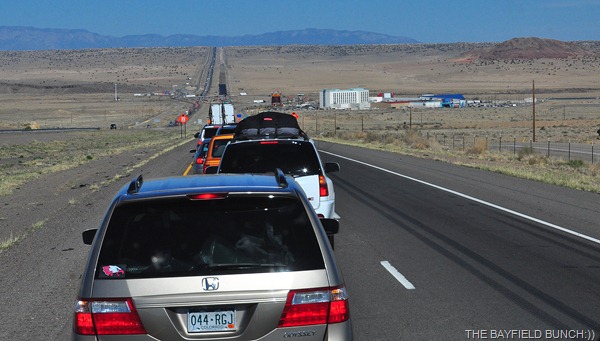 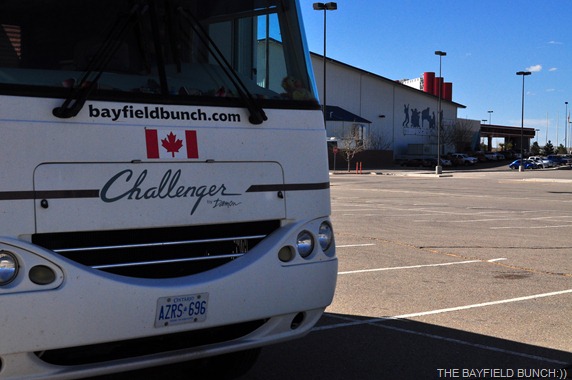 Sad supper tonight not having the Motor’s face alongside my plate trying to con me into a snack or two.  Yes, we have some adjusting to do again but tomorrow is another new day as we carry all those great years of Motor memories close to our traveling hearts…… 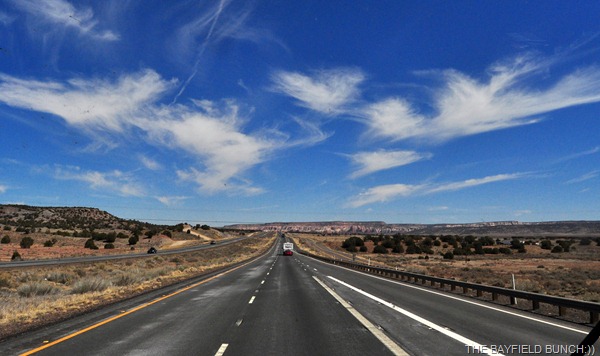 THE LAST PARAGRAPH: Some readers may remember how the deaths of Max & Checkers devastated me so badly nearly a year ago.  Because of those deaths I feel better prepared to handle Cora’s death.  We are missing our little Mouse terribly tonight…….but we will be alright. 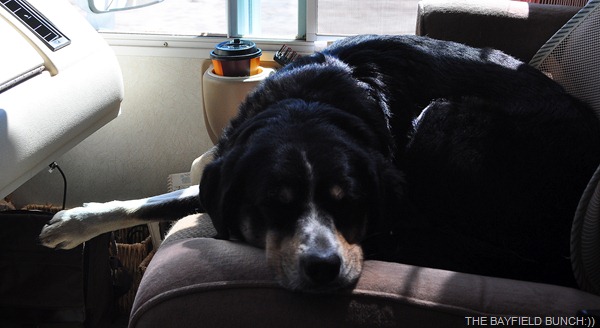 MY CHIEF NAVIGATOR…..NO WONDER WE GET LOST SOMETIMES