HOUSE RENOVATIONS ARE COMPLETE UNTIL OCTOBER…AND, A PROBLEM WITH THE RIG:(( 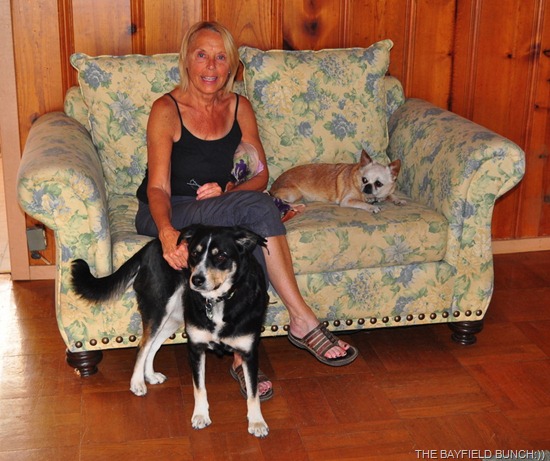 One of those up at 3 a.m. mornings had me on the ropes 12 hours later at 3 p.m.  I succumbed to a couple nasty swarms of zzzzzzzz’s.  The first swarm laid me low for about 20 minutes while sitting in our newly delivered recliner.  Second swarm got me in the Motor Home later when I sat down to check our email. 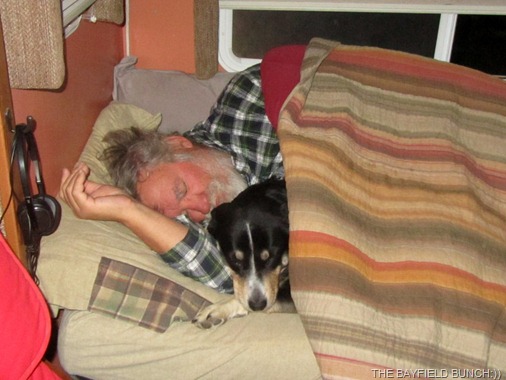 Dobie & the crew were on the job early & finished up the last coat of house paint.  They were next on on the roof tarring all the cracks, crevices, joints & holes.  After that came the rolling on of white elastomeric paint.  That took them into the early afternoon. 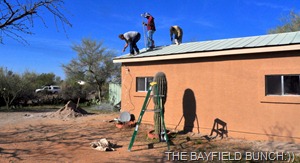 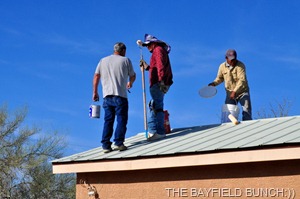 In the meantime, Kelly & I zip-a-de-do-dawed ourselves up the winding mountain road to Yarnell.  Kelly wanted to hit that Bakery before we headed home.  I like it when she thinks like that.  If your in the area you just have to stop at the Cornerstone Bakery & load yourself up with a belly full of pastries.  Everything is made from scratch & sells out fast so get there early.  We split a Breakfast Burrito & washed that down with a couple yummy doughnuts…10-4. 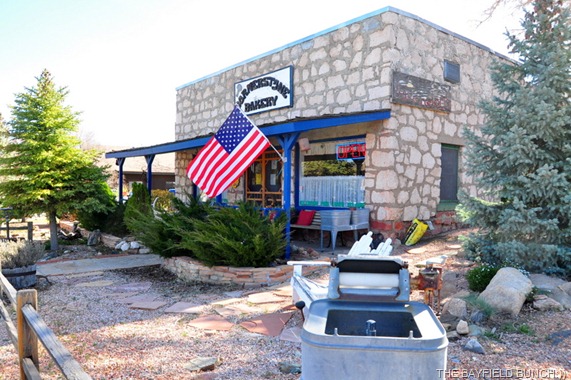 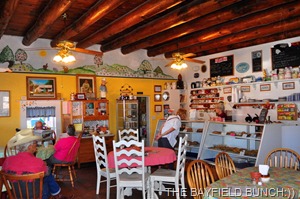 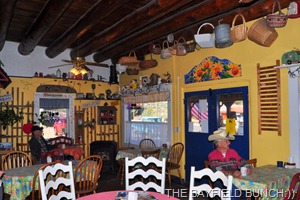 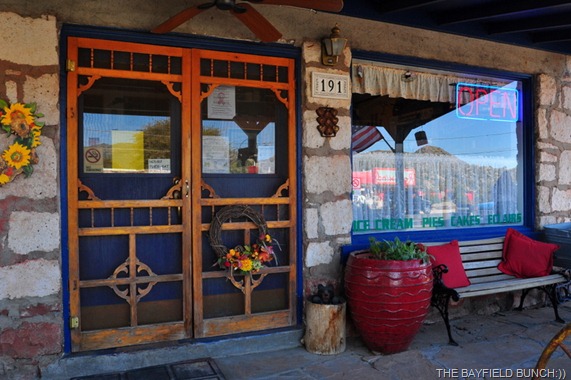 I had spotted something in the Rosewind collectables store a few days ago that I thought would be useful for the house so we stopped in & grabbed it.  Needed something to hang my Cowboy Hats on & this heavy wrought iron thingy-ma-boo seemed to fit the bill.  It’s in the photo below with a couple of my hats on it just inside our front door. 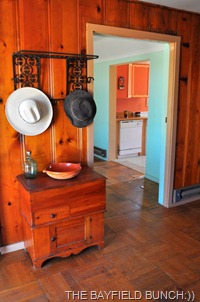 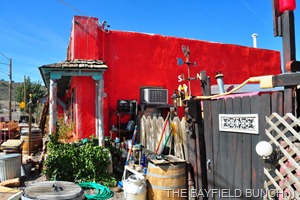 AJ from the newly opened Wickenburg Consignment store rolled in about noon with a trailer & some goodies for us.  Helped him unload a few things we had purchased on Wednesday.  A recliner, love seat, a wooden stool, a tall vase & an old table with some drawers in it.  All used & all in reasonably good condition.  Cowboy furniture I guess you could call it.  The joint is slowly beginning to look a little more like ‘home sweet home’ now:)) 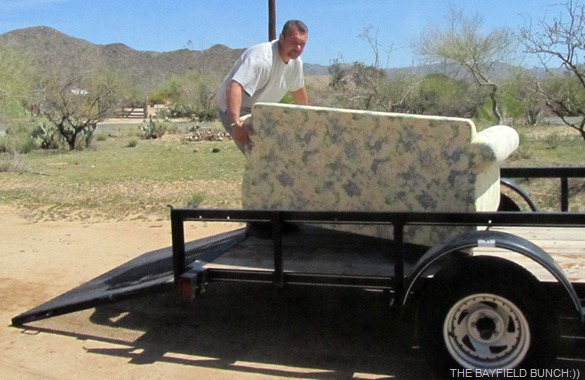 NEVER MIND THE PICTURES…JUST GET OVER HERE & HELP ME WITH THIS LOVESEAT!! 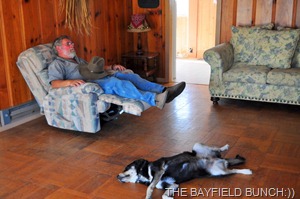 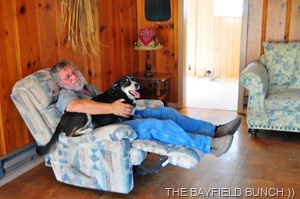 Friends of MIKE & PAT’S, Larry & Geri dropped in this afternoon for a few minutes to wish us well & have a look at the digs.  We had met them over at Pat & Mikes a couple weeks ago.  They are an energetic couple & if you read MIKE’S post you will see why.

We are still slugging it out with a poor phone & internet connection so that problem will have to addressed for sure when we return.  Had a ‘Wilson Sleek’ antennae & power booster device shipped to us in hopes that would improve our signal but ‘nada ’………didn’t help. 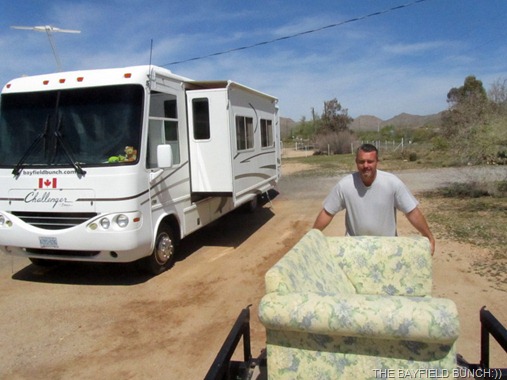 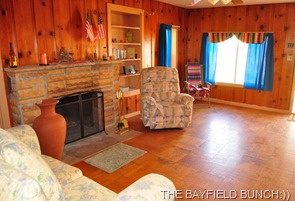 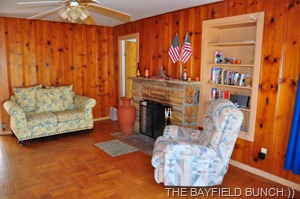 Adding to our final hectic days we have a perplexing problem with the rig as of this morning.  Had the generator running for a few minutes this morning while Kelly was brewing coffee.  It was a bit nippy so I clicked on our little electric heater figuring it would be fine with the generator running.  Ten minutes later all our power shut down.  Our solar batteries had dropped to 16%.  Turned off the heater but left the generator going to build the batteries back up.  Turned the genny off later but noticed we had no power whatsoever to your coach lights, bathroom fan, fridge & water heater igniters.  No power to run the water pump either.  Also no power to the slides…..unless we turned the generator on.  Checked all breakers, fuses & the GFI switch in the bathroom but to no avail.   Plugged into shore power for the rest of the day to put a full charge on our 4 Solar batteries & that didn’t work either.  Hate to have to drive all the way home with our gas generator running to keep the fridge cold, the water running & hot water in our water tank.  That would probably take us down to about 3 miles per gallon  So, not being too wise in the ways of all things smart, we do have us a little problem here in LaLa land…………Oh Dear:(((((( THESE 2 MEXICAN FELLAS WERE HARD WORKERS

IVAN has taken some nice photos around Sedona Arizona & I particularly like the one from Sedona’s Airport showing the surrounding landscape just after a snowfall early last week.  I think the big red rocks & many green forested trees around SEDONA make it one of the most scenic areas in the State.  We stayed at Dead Horse State Park near Cottonwood back in 07 & totally enjoyed that whole area.  Nice thing now is…..our winter base here in CONGRESS is only a short & scenic 3 hour drive from Sedona.  Easy to slip over there with the rig for a couple nice boondocking weeks anytime we are here during the winter.  As stated in an earlier post, our new Arizona digs are centrally located to all of the Southwest now. 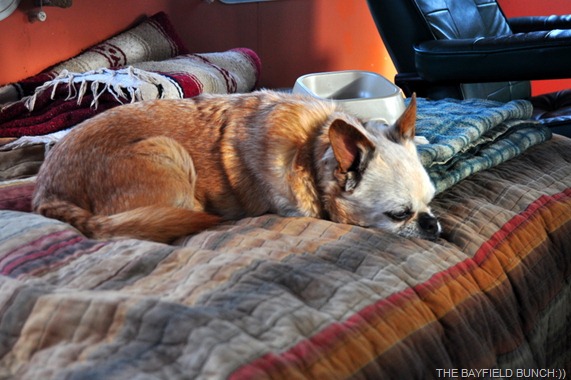 For all you do-it-yourselfer RV folks out there you might want to keep Karen & Steve’s SMALL HOUSE-BIG BACKYARD site handy.  This is an extremely talented fellow when it comes to RV repairs & renovations.  Seems like there isn’t anything he can’t do.  And, Karen documents everything so their Archives are full of fix-its & Renos.   They are currently preparing their lovely ‘in the woods’ Wisconsin home for sale & will soon be on the road full time in their older restored & renovated 38ft Safari Serengeti diesel Motorhome.  Although we haven’t met Karen & Steve yet, we have been RV blogging friends for a long time now. 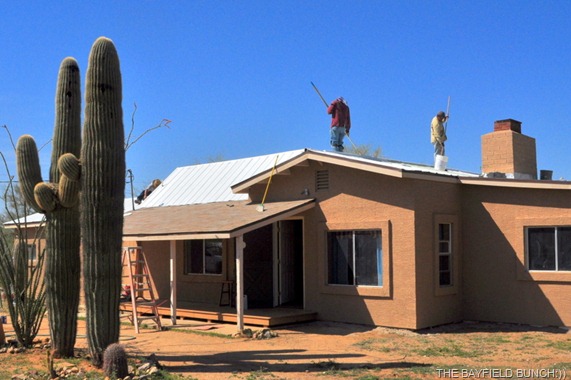 Although sad about having to leave our Arizona house soon & having to endure the long drive home I do look forward to parts of the traveling aspect again.  We’ll be seeing some new territory & traveling on some roads we have never traveled before.  Always enjoy the excitement of the open road.  Especially here on the west side of the continent where the manic traffic chaos isn’t so totally nuts!! 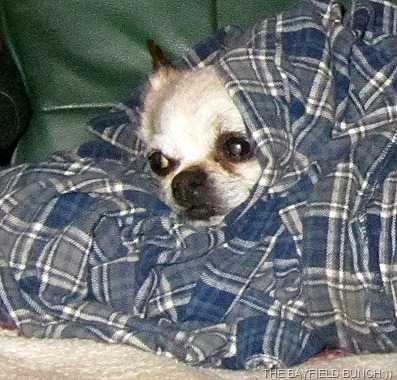 STAYING WARM IN A PAIR OF DAD’S OLD PJ’S

We welcome a couple new Blog Followers today.  Sherry & David from, IN THE DIRECTION OF OUR DREAMS joins the Bunch just in time for a long 2200 mile drive back to our home in Bayfield  Ontario.  Terry from, RANTINGS, RAMBLINGS, & REDISCOVERY also just made it aboard in time for the long trip.  Welcome to our blog folks:)) 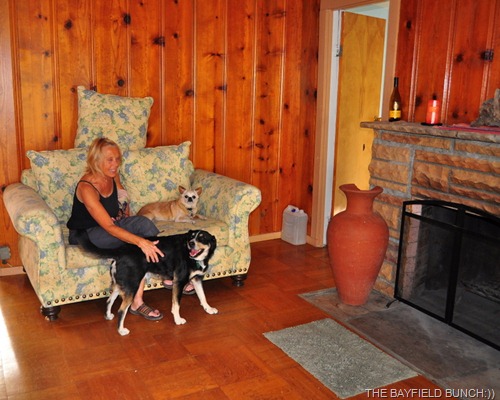 GROANER’S CORNER:))  A man decides to take the opportunity while his wife is away to paint the toilet seat.
The wife comes home sooner than expected, sits, and gets the seat stuck to her rear.
She is understandably distraught about this and asks her husband to drive her to the doctor. She puts on a large overcoat so as to cover the stuck seat, and off they go.
When they get to the doctor's, the man lifts his wife's coat to show their predicament. The man asks, "Doctor, have you ever seen anything like this before?"
"Well, yes," the doctor replies, "but not framed like that."