BOON DOCKED AT OUR OWN ARIZONA DIGS:)) 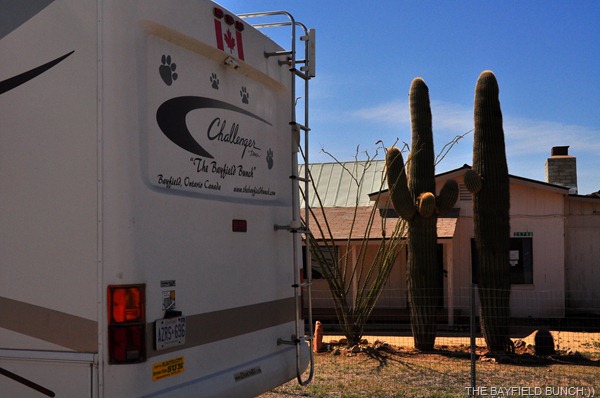 WE ARE NOW PARKED IN FRONT OF OUR NEW DIGS

We sat under a crystal clear starry sky beside our desert campfire Monday night until well after dark.  I knew this would be our last night boondocking in our beloved desert for awhile.  What a special spot we have had for this past while here in the quiet Mesquite Savannah.    This last desert boondocking location will go down in our memories as one of our most memorable, simply because of it’s quiet simplicity.  Took a last long look at the stars from horizon to horizon, gave the ashes in the campfire a stir & called it a night.  Tuesday would dawn a new day & a whole new era for the Bayfield Bunch would begin………… 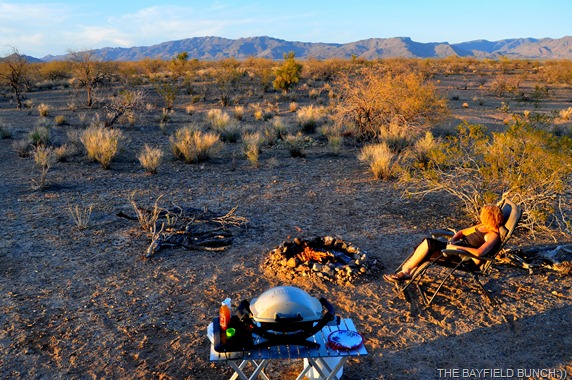 I started breaking camp before the morning sun even made it over the mountains to our East.  Didn’t take long to have things put away, TV aerial down, slides in, etc.  By 8 a.m. we said good-bye to our favored campsite & Kelly slowly led the way out of the desert in the Jeep.  Had her go first in case I hung the Motorhome up in a bumpity little wash going out.  Picked up some more groovy desert pin striping as I carefully maneuvered slowly along the sandy road brushing by prickly Mesquite trees.  Eased down into the wash being careful not to let the hitch come down too steeply.  No grounding out & I was across & up the other side.  Lots of creaking in the rig as I swayed from side to side.  Kelly opened the gate ahead, checked the Speedway traffic & waved me through.  I was up on the highway & off to North Ranch just a mile up the road.

NOT MANY PHOTOS TONIGHT…..SLOW CONNECTION:((

Dumped our tanks, took on a load of water & topped off our propane tank.  It was a beautiful morning for doing all that too.  Motor, Pheebs & I headed for Ghost Town Road with the rig while Kelly headed over to MIKE & PAT'S.  We had received additional paper work from the Realtor & copies had to be printed.  Pat had a printer & said bring em on over & we’ll get em printed up fer ya:))

In the meantime I was able to get parked in front of our house & leveled up.  While driving in I didn’t even see the low electricity line from the street post to the house.  When Kelly arrived she pointed it out right away.  The great RV Gods must have been watching over me because the sloped front edge of our A/C cover had gently lifted & directed the power line up on top of the cover as I stopped.  Power to the house is not turned on yet but I could have easily torn that power line down.  Yes, yes, I know….ya gotta remember to look up.

Kelly was able to get the lock box code from our Realtor guy so we were able access the house key & let ourselves in.  That was a big help for us because we had only seen it briefly one day with the Realtor awhile back.

As we walked from room to room this morning we sure knew we had our work cut out for us.  Dear oh dear, where do we begin.  Kind of like an Artist standing in front of blank canvas not knowing where to place the first brush stroke.  But, one day at a time we will get it done.  The fun is in the doing:))

Mike had sent a garden rake along with Kelly this morning & that sure came in handy while raking out some old dead Prickly Pear Cactus.  Thanks Mike, that rake saved me a bunch of prickers in my hands.

I was able to locate the water shut off valve by the road & get it turned on.  We now have running water in the house & yard taps.  We didn’t mess with the water heater.  Afterall, the deal isn’t even finalized yet & we don’t officially have the keys

Got myself another load of brush burnt up.  Oh how I wished I had all my garden tools here.  Had us a chat with the neighbor beside us who has only been here himself since last November.  He is making great strides in getting his piece of property cleaned up as well.  Says it’s a very quiet neighborhood & I was relieved to see they have no street lights.  Light pollution is another thing I do not like.  Looking forward to my first glimpse of the night sky from our new digs.

Late this afternoon we Jeeped ourselves over to North Ranch.  LAURIE & ODEL had invited us over for supper.  Always enjoy chatting with these well known folks in the blogging world.  They have been full timing for over 9 years now.  Jim & Bev (our Jeeping friends) dropped by to say Hello as well before heading on home.  Laurie served up something called Posol. There was a whole lot of recipe stuff in it & all I can tell you is that it looked kinda green & tasted great.  Actually, Laurie talks about making it in her last post.  Sat outside until sundown when it began to cool off & then moved inside for cake.  I always really like the cake part too.  We didn’t stay too late & soon headed back for our new digs…..if we could find them.  It was dark & we hadn’t left any lights on in the rig.  Drove slow & spotted the rig where we figured it should be.  Like I said earlier, no street lights around our place.  Love it:)) 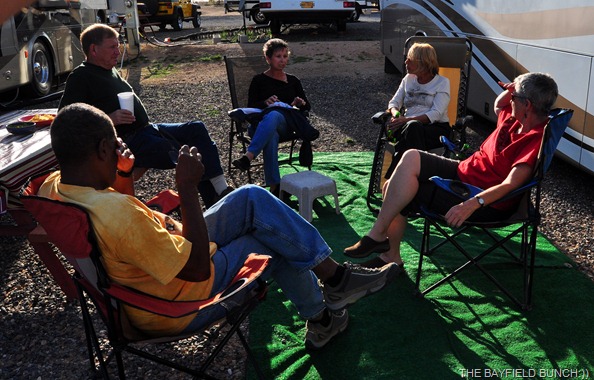 It’s a mixed bag neighborhood we have here.  From some nice high end developments & homes to places that are little more than junk yards.  I do have a good feeling about the neighborhood though & I think the Bayfield Bunch will fit right in here quite nicely.

In Monday’s post I mentioned about Congress being a great central location & springboard for future area travels to new & old places.  We can drive to Bisbee in a day or Borrego Springs California in half that time.  It’s a full day’s drive to Moab Utah & we could make it to the South rim of the Grand Canyon in about 4 hours.  About 3 & a half hours to Joshua Tree National Park.  A short 3 hours down to Darby Well in Ajo & about 3 hours over to the Sedona area.  A day’s drive could easily land us in Silver City New Mexico & a day’s drive from Congress could put us up into Cortez, Colorado.  Yep, I think we are in a pretty great area for many future travels alright.  And, it will make for a new route between our Bayfield digs & our newer Arizona digs now as well.  I will be working that new route out shortly & for sure I will miss the old route we have used these past bunch of years.

To answer a few questions about our new digs…..yes, we are on city water.  No, the cement patio pad behind the house is not big enough for a Motorhome.  We have plenty of room for the rig on the north side of the house.  Probably could easily park 4 large rigs in that area.  Paved road out front is a dead end road so we will have minimal traffic.  Wickenburg is 17 miles to our south & Phoenix is about 75 miles southeast.  Prescott is about 50 miles north of us.  We are on a septic tank system.  I am guessing an average price for an acre of land in our area is $50,000. (no buildings or services)  And yes, we do have a gated fence around the house so it is safe for the dogs.  It was this fenced in part they were trying to sell for $39,900 a couple weeks ago.  We do intend on redoing the fence line at some point to include all the property & not just part of it.

And, a word of thanks to all those readers & fellow Bloggers who have wished us well with our Ghost Town Road house & property purchase.  The response in our comment section has been so unexpected & so overwhelming.  Very heart warming to know we have so many friends & supporters out there….despite me being such a grouchy complainer at times.

Lastly, we have a very poor Verizon connection here so if by any chance you don’t hear from us at our regular time each night it just means we are experiencing some technical difficulties with the Verizon signal…………..