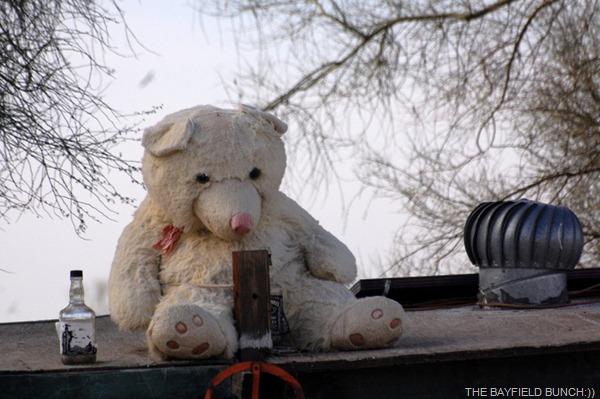 With howling Coyotes blending nicely with barking Dogs, we had ourselves a mighty fine melodious animal symphony going on early this morning.  Until the Rooster chimed in & shut them all up!! 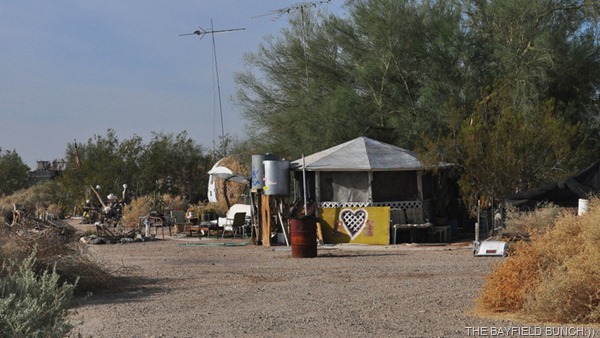 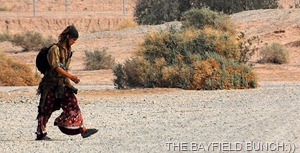 Kelly saw soundless flashes in the Chocolate Mountains to our east last night around midnight.  The Military obviously had a far distant bombing operation under way.  Somebody opened up with a heavy caliber machine gun this morning somewhere to our northeast.  The firing continued for nearly an hour.  But, there is an explanation.

Slab City is located right next to an active military live fire bombing & gunnery range so it is not unusual to hear the ‘pa-rump’ of heavy explosives or the roar of jet aircraft overhead.  It was here years ago where I saw yellowish tracer gun fire & red rockets coming out of the sky over in the mountain range one night. NOTICE IN ALL THREE PICS THE VEHICLES ARE ON CEMENT SLABS…THUS THE NAME, SLAB CITY….OLD MILITARY BUILDINGS ONCE STOOD ON THESE CONCRETE FLOORS.

Threw the cameras in the Jeep this morning & off we went playing tourists touring the Slabs & it’s suburbs. Yep, even the Slabs have suburbs. Saw kind of a Ritzy area over around the southwest perimeter with it’s high end Class A’s. Nothing shabby about these folks. Didn’t see any point in me taking pics of them because you can find these Snow Bird rigs in any ordinary or up scale RV Park. Maybe I will just call them Snowy Slab Birds. But, unlike RV Parks these dry camping folks are not regimented into tight fitting neat little rows. Just park your rig wherever you like, show respect for your neighbor and get on with enjoying your day.

Some Slabbers keep their sites neat as a pin while others seem to drag home anything & everything that is dragable & pile it on top of themselves, living somewhere within the pile of clustered debris.  To each his own & no questions asked. 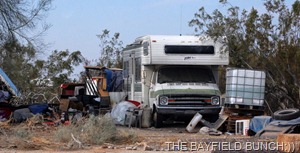 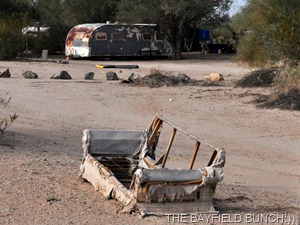 I always find it interesting to see how folks live and treat their immediate environment.  There are many varied & concentrated examples of that here at the Slabs.  This is not like driving through your usual run of the mill boring burbs in most cities & towns.  Here’s a quote Kelly noticed on the internet this morning by someone driving into Slab City for the first time.  “Took a trip today to Slab City for the first time. Man, what a trip. It's a Mad Max-hillbilly-hippie-artist destitute community. Wow, I love it.” 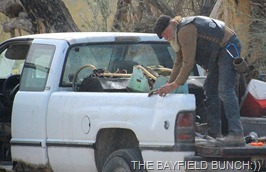 Some may ask, “why stay at the Slabs now that your solar is fixed”?  My answer, “Why not:))”  Slab City is an experience, just as Quartzsite is an experience just as Darby Wells, the Ranch, Borrego Springs, Canyon de Chelly, Columbus New Mexico, Hickiwan Trails, City of Rocks, Blair Valley, & countless other places are all experiences.  For us, it is RVing at it’s best.  Staying on the move, traveling from place to place seeing & experiencing new, exciting, & scenically interesting things:)) 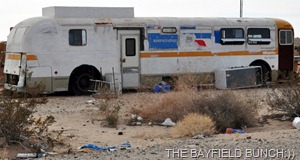 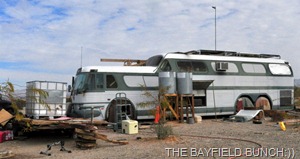 Question was asked about why the fuse thing may have melted down between our solar panels & battery.  Mike explained that fuse assembly as being a factory defective part which he discontinued using in his installations quite awhile ago.  He now uses the maxi fuse assembly seen in yesterday’s blog. 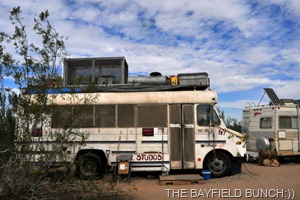 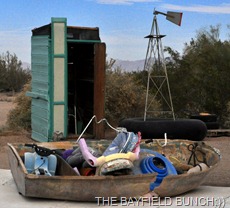 And a comment from ED this morning regarding Leonard Knight’s Salvation Mountain.  “Leonard Knight did not pass, it was his care taker that lived with him that died.  This past December, Knight moved to a nursing home in San Diego county. He’s 80 years old.  San Diegan Dan Westfall, a friend of Knight's, and a group of concerned locals have formed a non-profit board to look after Knight's mountain.  Salton City resident Imari Kariotis is the board's secretary. "The purpose of the nonprofit is to maintain and promote Leonard’s folk art, and to pass on his message of unconditional love."

NO, THESE ARE NOT SLAB DOGS…THEY WERE JUST VISITING THE SLABS TODAY FROM ALL THE WAY UP IN YELLOWKNIFE, NORTHWEST TERRITORIES

Jim & Rene from LIVE-WORK-DREAM walked over about 5 this afternoon & we all had supper together.  Nice to sit down & chat up a storm with these guys again.  We always have lots in common every time we meet & it’s always fun to catch up with each other’s travels & experiences.  They have a summer home in Colorado’s Rocky Mountains. 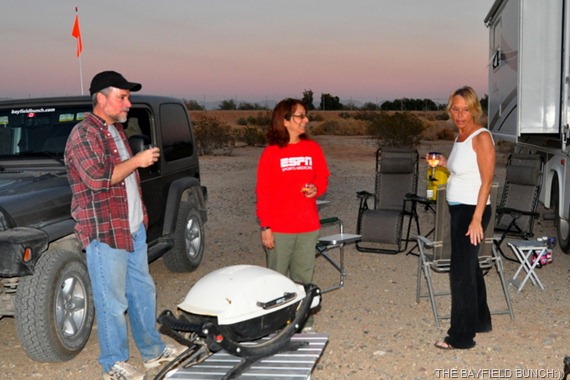