Been a long time since I have seen the International Space Station but sure enough there it was at 5:45 a.m. this morning straight overhead traveling from north to south.  First spotted it moving through the Big Dipper just after letting Pheebs & the Motormouse out for their morning constitutional.  The ISS is larger & much brighter than the usual array of satellites in the night sky so is easily discernable. 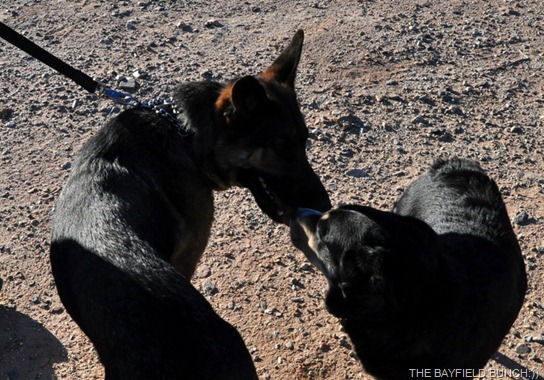 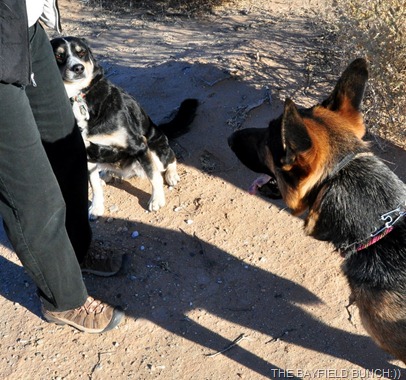 SHE’S NOT TO SURE ABOUT WYATT AT FIRST 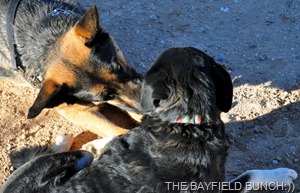 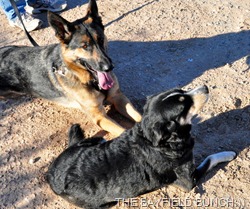 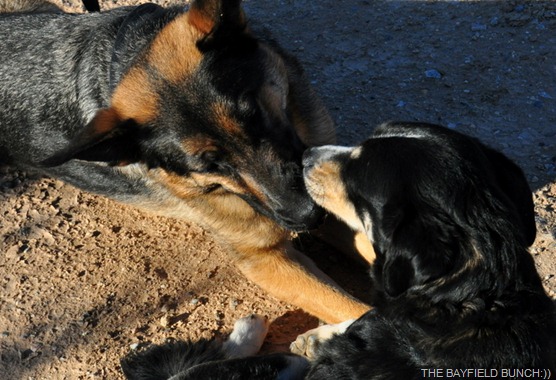 We had heard Time Magazine was here awhile back doing a story on the Slabs & a Commenter this morning said that article is now out & you can read it here at LIVING LIFE OFF THE GRID IN CALIFORNIA'S BADLANDS.   England’s BBC was here last week as well working on a documentary & doing some filming at the ‘Range.’  More about the ‘Range’ in Saturday’s blog.  The Range is also mentioned in the Time magazine article. 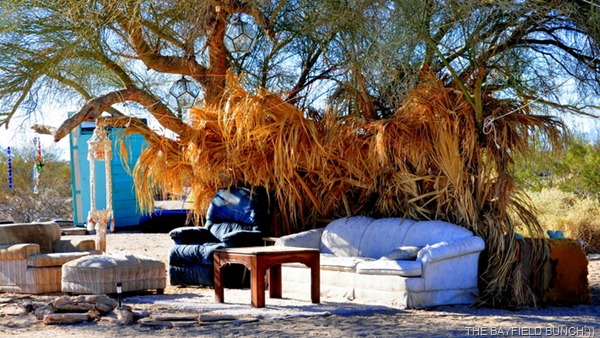 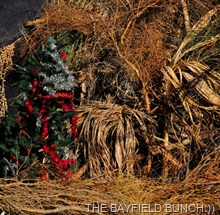 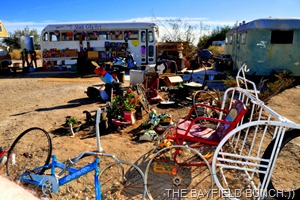 Bit of a dilemma when out for a walk this morning.  Noticed little Motormouse couldn’t walk on her right rear leg.  Quick check for stickers or a cut from broken glass came up negative.  A fellow we were talking to pointed out the Harvester ants on the ground & said it could be a bite.  Took her right home because now she began shaking & whimpering in pain.  Kelly quickly got on the internet & we ended up spraying her paw with an antihistamine.  Whimpering stopped & after a about an hour she was gingerly able to begin walking on her paw again.  Shortly after that she was stretched out comfortably having a big snooze in the sun all fixed up:)) 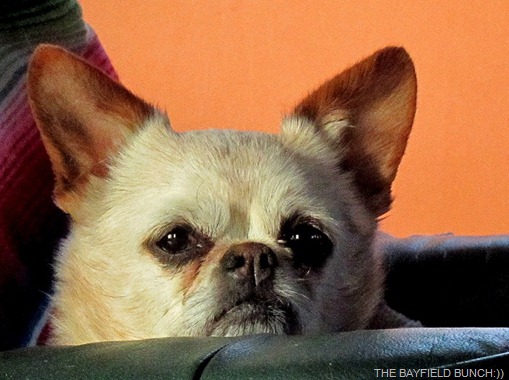 Neighbor Rob with the cool Sportmobile Van (yesterday’s blog) came over this morning for awhile & brought his Ipad.  This fellow is an excellent photographer el extraordinaire & does a lot of creative stuff with time lapse & special effects lighting.  You can see Rob’s expertise immediately when you have a look at his STUDIO G PHOTOGRAPHY.  Rob also spent time showing us the ins & outs of his iPad.  I especially liked one of the Astronomy Apps he had.  Hmmmm, could there be an iPad in the Bayfield Bunch’s future?? 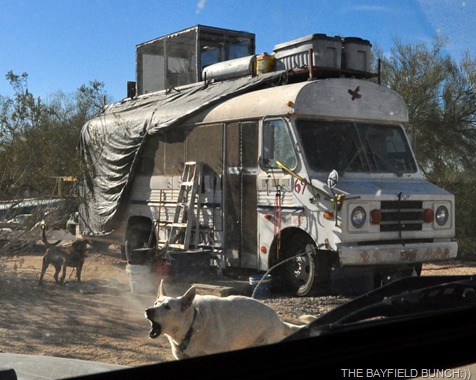 Had a few more questions about the Slabs which I’ll try to answer.  This part of the California desert gets brutally hot in the summer & we understand the population here drops from about a thousand in the winter to about 50 when the 100F+ days hit.

THIS MILITARY RANGE IS BACK GROUNDED BY THE CHOCOLATE MOUNTAINS

There are no facilities in Slab City.  Full time residents have large 2 & 3 hundred gallon water tanks which are filled by a Slab resident with a pick-up truck & a big water tank in the back.  I’m not sure where the driver gets the water but we think it is in Niland from a tap behind the gas station.  There is also a Rest Area with water & dump facilities 2 miles south of Calipatria but the water pressure there is very low. 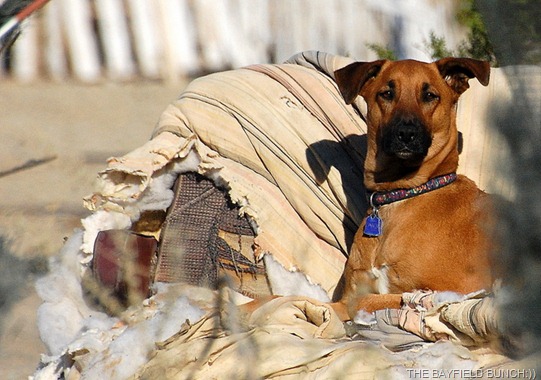 Had a question about sanitation.  With no water available there are no septic tank systems to speak of.  Everything goes into a hole in the ground much like the way things were done years ago.  Many of we older folks will well remember the old ‘outhouse days’ of yesteryear.  I do. 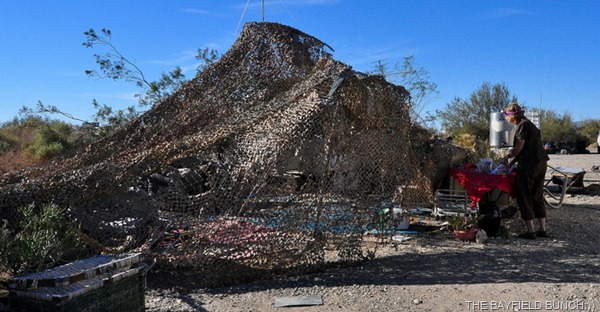 KELLY STOPS TO LOOK AT SOME STUFF 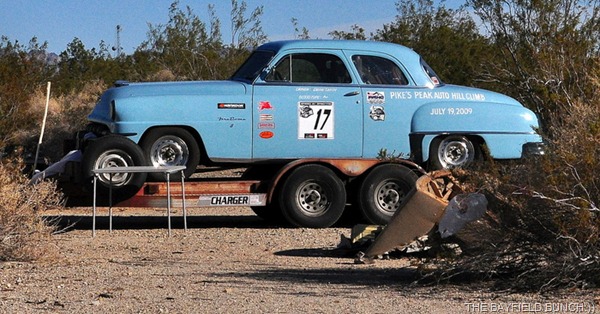 Here at the Slabs those holes in the ground are referred to as Gopher Holes &  there are folks here who specialize in digging those Gopher holes.  Three feet by three feet is the standard.  A piece of plywood covers the top, a sewer hose is inserted and dirt piled on top.  That’s it & your good to go for a whole season.  No pumping it out….just dig another hole.  Needless to say, there are a lot of hidden Gopher holes here at the Slabs.  We did hear of a big Class A backing over one & dropping a set of dual wheels into a hole.  Required a tow truck to get that big A unstuck from the Gopher pit.

Something else I have noticed.  You can tell the length of time a Slabber has lived here by the number of rattles in his vehicle.  Roads leave a little bit to be desired in the neighborhood, especially between the Slabs & Niland. 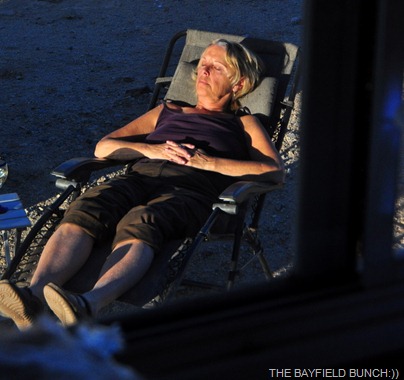 We are still trying to decide if we will go to Borrego Springs this year or not.  Totally love the place but have been there 5 years in a row now & we feel it’s time to venture off in search of new horizons.  But, who knows. 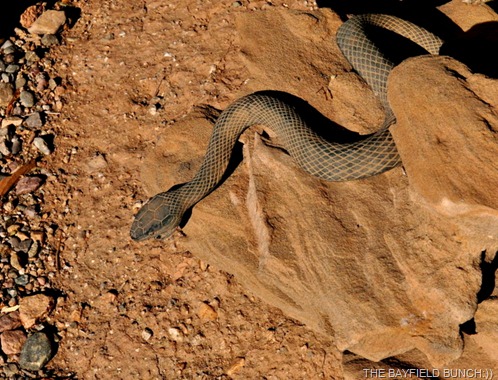 BELIEVE IT OR NOT, BUT……….THIS LITTLE FELLOW IS MADE OF RUBBER…SEEN OUTSIDE A SLABBERS HOUSE

We had heard of a golf course here at Slab City so this afternoon we jeeped ourselves over towards the military range and sure enough there it was.  An 18 hole golf course out in the desert. 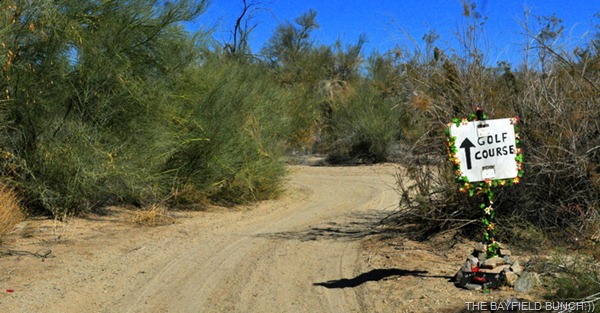 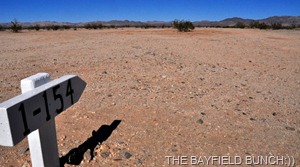 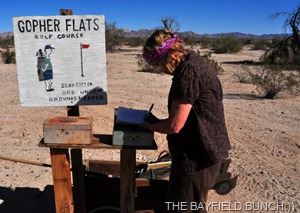 AND YEP, THERE WERE A COUPLE OLD DUFFERS OUT HERE TOO 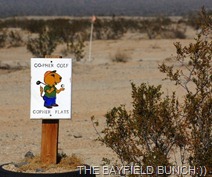 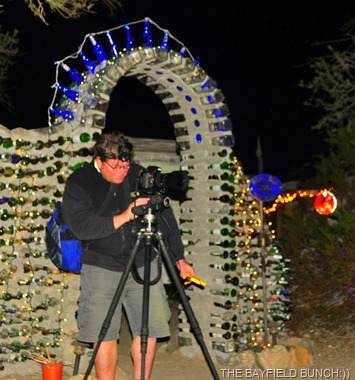 Just after sunset Kelly & I headed over to the ‘East Jesus Sculpture Garden’ because we heard they light the exhibits on the week-ends.  Neighbor & photographer Rob was already there creatively lighting & photographing various pieces.  We spent close to an hour watching Rob work.  I learn best from watching:)) 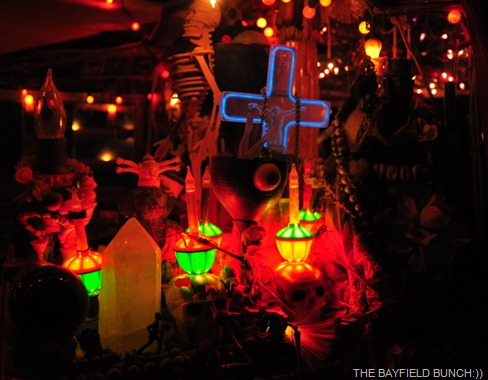 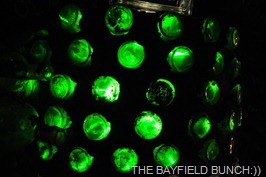 COUPLE PHOTOS OF THE BOTTLE WALL 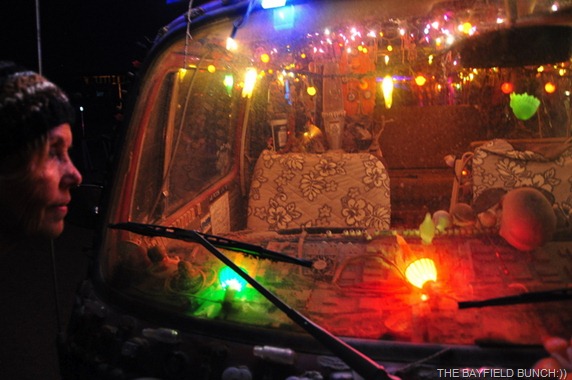 GROANER’S CORNER:))  Three sons left home, went out on their own and prospered. Getting back
together, they discussed the gifts they were able to give their elderly
mother.

The first said, "I built a big house for our mother."
The second said, "I sent her a Mercedes with a driver."
The third smiled and said, "I've got you both beat. Remember how mom
enjoyed reading the Bible? And you know she can't see very well. I sent her a
remarkable parrot that recites the entire Bible. It took elders in the church
12 years to teach him. He's one of a kind. Mama just has to name the
chapter and verse, and the parrot recites it."

Soon thereafter, mom sent a letter to each son. "Milton," she wrote one son,
"the house you built is so huge. I live in only one room, but I have to clean the
whole house."

"Gerald," she wrote to another, "I am too old to travel. I stay most of the
time at home, so I rarely use the Mercedes. And the driver is so rude!"

"Dearest Donald," she wrote to her third son, "you have the good sense to
know what your mother likes. The chicken was delicious."