FROM A MINE SHAFT TO A FLEA MARKET, AND……… GARFIELD:)) 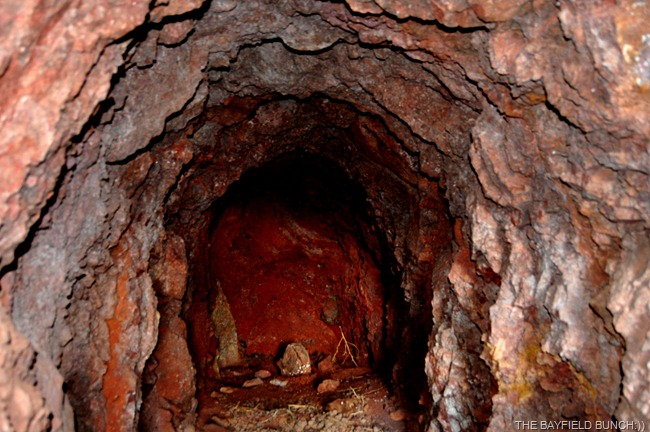 We had noticed a cave/mineshaft in the hillside beneath yesterday’s hike up to the TV repeater station so figured we’d go have us a look see in that dark hole this morning.  Silly me forgot to put on my hiking boots so it was a slip sliding away hike up a lot of loose pebbly stones. 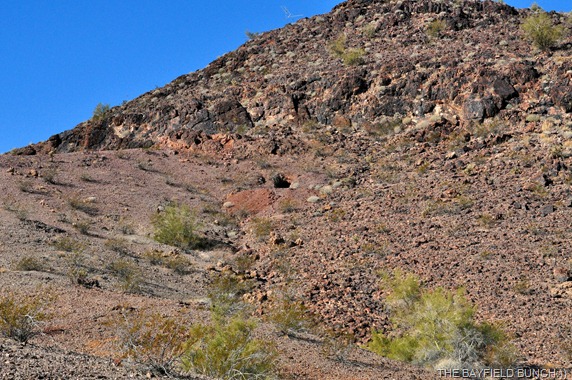 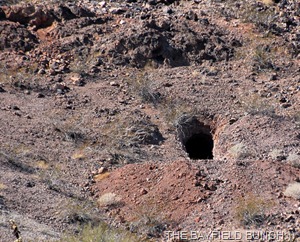 The cave turned out be as expected, a mine shaft going straight into the side of the hill/mountain.  I’m guessing it went in for maybe a hundred feet or so & stopped.  These old mine shafts always amaze me when I think of the huge effort, sweat & toil it took those old prospecting miners to sledge & pick their way through solid rock.  And all that loose rock then had be be either carried out or hauled up & out of those mines.  And these old mine shafts are absolutely everywhere out here in the west. 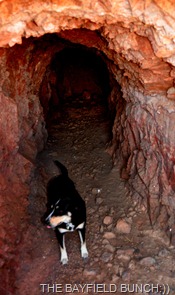 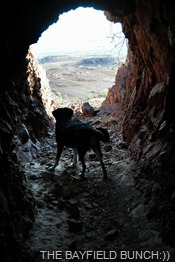 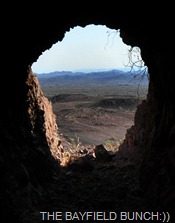 THE TUNNEL ENDED AFTER ABOUT A HUNDRED FEET

From the old 49’er miner digs we headed ourselves into the hustle & bustle of downtown Bouse about 3 miles away.  Well, not to much hustle & not to much bustle in little hustleless , bustleless Bouse, but it’s our kind of low key town:))  Kelly spotted a flea market which had Quartzsite written all over it.  Flea markets are not my favorite thing because I am not much of a junk collector, but we did find something I had been looking for ever since we got our Jeep. 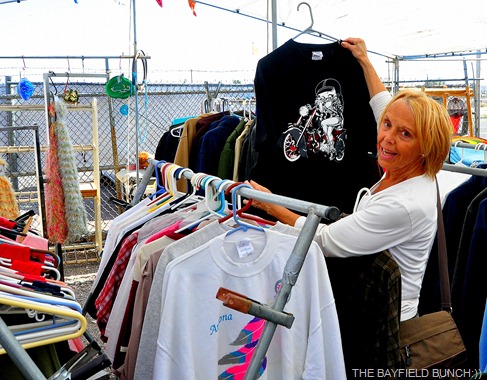 NO, THIS IS NOT WHAT I HAD BEEN LOOKING FOR…

Jeep people, like Harley owners have always been known for their attitude.  It’s just one of those little foibles of society.  I remembered a cartoon series years ago which featured a cat with a big attitude & his name was Garfield.  This morning, in the sleepy little town of Bouse Arizona, in a dusty & tired looking market of fleas alongside highway 72, I at last found my elusive, & packed full of attitude……… Garfield:)) 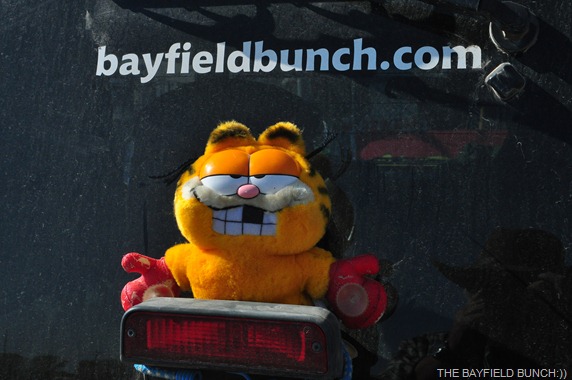 This whole region of Arizona was a huge desert training ground during the Second World War & many of the places we have been the past few years have shown evidence of that.  Remains of abandoned army camps are everywhere with Slab City being one of the best known.  BOUSE was also within the army’s grasp in those days with a secret camp located about 30 miles east of town.  General GEORGE S PATTON roamed this land with his many ‘in training’ tank brigades preparing for overseas action in North Africa & Europe.  Many military artifacts can still be found scattered throughout the desert.  Probably still a few live tank rounds buried here & there too. 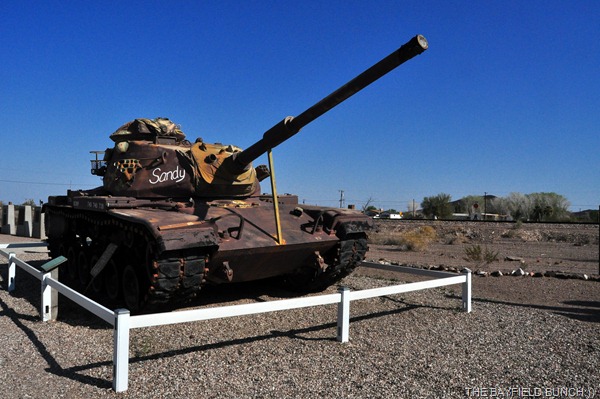 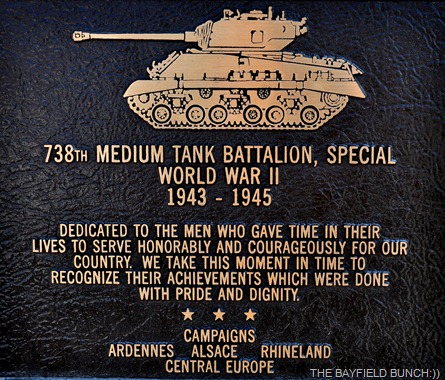 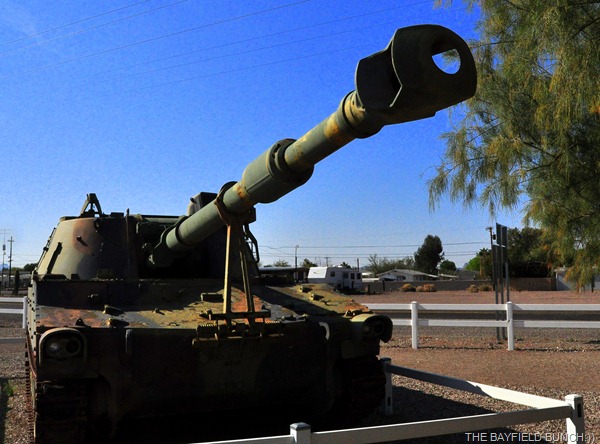 The day turned out to be warm & sunny but the winds kicked up swirling a lot of dust into the air giving the horizons a hazy look.  Not a cloud in the sky & it looks like warmer weather is on the way to the whole area.  Still pouring over our maps considering where we will go next.  Really hoping the weather is going to warm up enough for us to get up into Monument Valley next month.

When we are out Jeeping I generally let Kelly pick the roads we are traveling on.  That way, if we climb a rise with a 3,000 foot drop off on the other side I can at least say to her on the way down…."well, you told me to go this way”!! 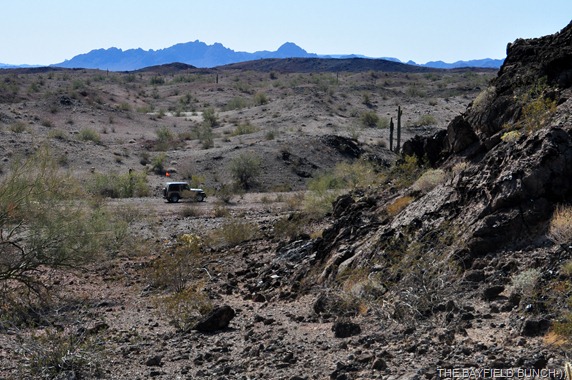 Wasn’t satisfied with the resolution in Saturday’s post photos so went back in this morning & made some improvements.

LIKED THE COLORFUL FLOWERS AT THIS BOUSE HOUSE

There are still some Comcast folks having problems accessing our site.  Fran sent us an email this morning with a possible fix for this annoying problem.  “I found out that the problem lies within the services area in the control panel under Administrative tools. click on the services shortcut and scroll down to google update service (gupdate) and google service update (gupdatem) make sure that they both have check marks in the boxes next to them. then in the (gupdate) under the startup type make sure that that is automatic and the (gupdatem) under startup type is manual. exit out of the services window and exit the administrative window and open Internet explorer and surf to your web page and walla it works.”  Thanks Fran:)) 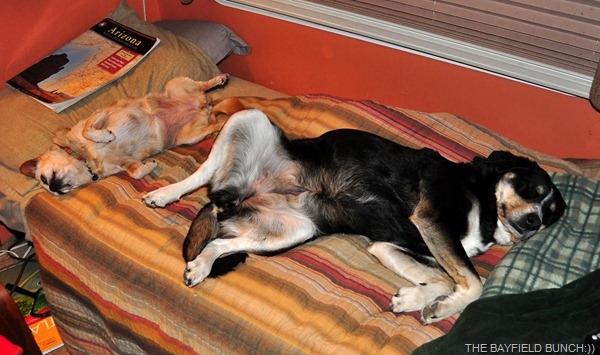 SATURDAY NIGHT AT OUR HOUSE

GROANER’S CORNER:((  An airplane pilot had had a particularly difficult flight and a rough landing. The airline had a policy which required the first officer to stand at the door while the passengers exited, smile and give them a ''Thanks for riding Royal Airlines.'' But, in light of his bad landing, the pilot had a hard time looking the passengers in the eye, thinking that someone would have a smart comment. Finally, everyone had gotten off except for this little old lady walking with a cane. She said, ''Sonny, mind if I ask you a question?'' ''Why no, Ma'am,'' replied the pilot,'' ''what is it?'' The little old lady said, ''Did we land or were we shot down?''