I THINK I COULD EASILY BECOME A SLABBER SOME DAY………

The barking dog at 5 a.m. woke me up just in time to hear the crowing Rooster half an hour later.  I have always found crowing Roosters kind of a nice way to wake up.  Not so much barking dogs.  In fact, I think Slab City has more barking dogs per square inch than anywhere else in the world.  And yes, we do have the proverbial train whistles in the distance here too:)) 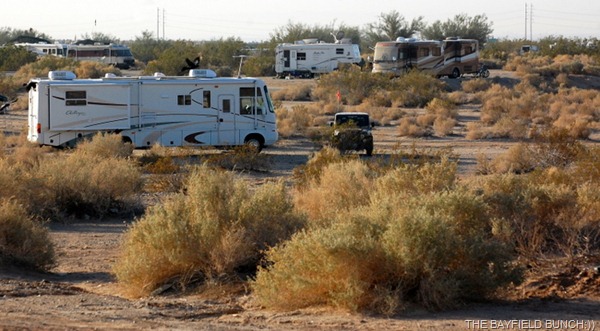 OUR RIG WITH JIM & RENE’S 5TH WHEEL IN THE BACKGROUND 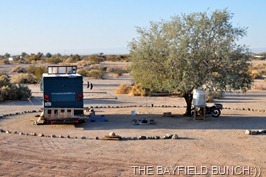 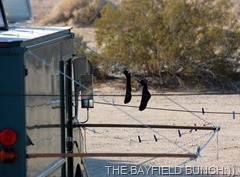 Slab City is mainly known for it’s cluttering piles of rubbish & junk, but I have to tell you, the area we are in is free of all that.   No white plastic shopping bags caught up in shrubs and trees, no rusting car parts, no tumble down shacks and best of all the ground is not littered with millions of shards of broken glass.  Wished I could say that for other great scenic boon docking spots we have frequented.  But, more about the Slabs later.  And, more in a later blog about cleaning up a campsite where one is staying!!!! 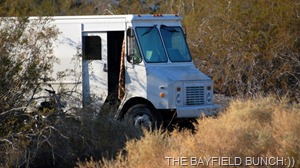 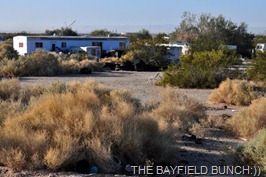 YES, THERE ARE PEOPLE LIVING IN ALL THESE PLACES

Our morning dawned clear & bright as is usually the case here in the Southwest.  Not a cloud in the sky.  Saw Rene heading out for a walk with their dog Wyatt. 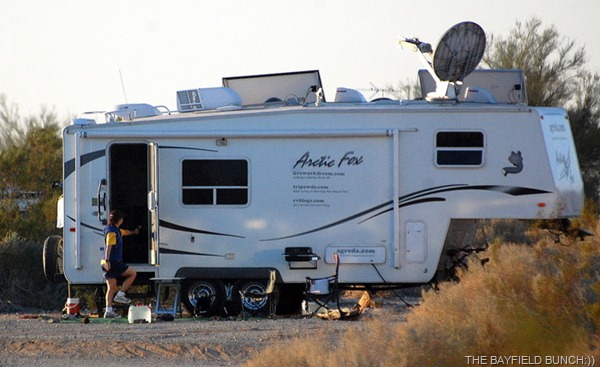 One would wonder how thousands of tiny sea shells would end up here in this very hot scrubby desert region but I suppose this was once an ocean bottom centuries ago. 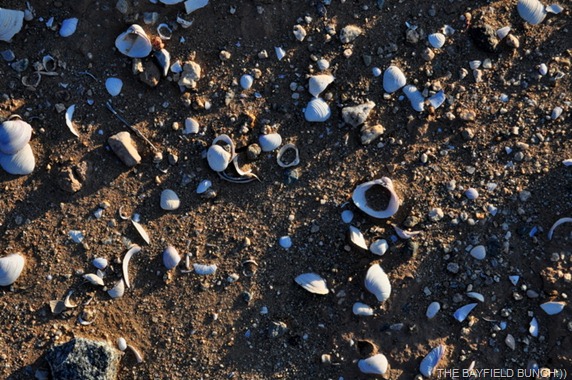 We Jeeped ourselves a short distance to Solar Mike’s Sun Works place.  Nothing had changed & things looked the same as when we rolled out of there with our new solar system just over 4 years ago.  Cordial Mike was out right away & suggested we bring the coach over & he would look at things right away.  Bonus.  And, when we got there it didn’t take him long to track down our problem. 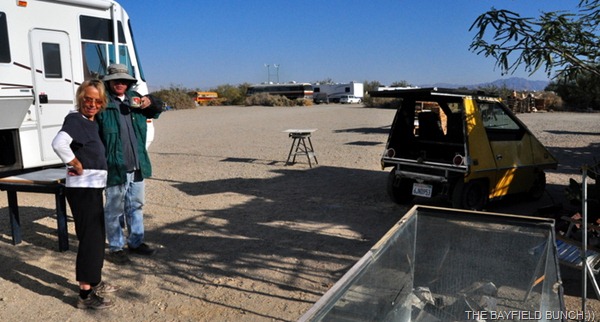 SOLAR MIKE FINISHES A MORNING COFFEE BEFORE SETTING TO WORK 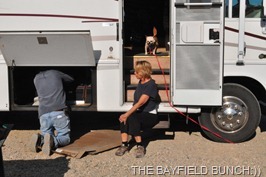 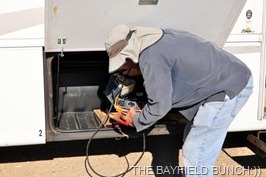 KELLY & THE MOTORMOUSE KEEP A CLOSE EYE ON THINGS

After our first few months on the road years ago we determined very quickly that RV Parks were definitely not in our future.  In order to keep ourselves out of those places we would have to go with solar power.  Kelly spent a lot of time on the Internet back then searching out information on solar installers.  She read a lot of reviews & the one place that kept rising to the top of the heap for reliable & trustworthy solar installations was a fellow in Slab City California.  We had never heard of a Slab City but this Mike guy at Solar Works had a lot of good reviews so  when we finally decided to go solar we headed for California.  We have never regretted that decision and today was a good example of why. 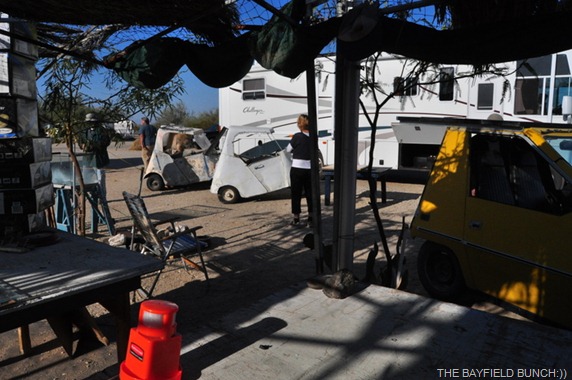 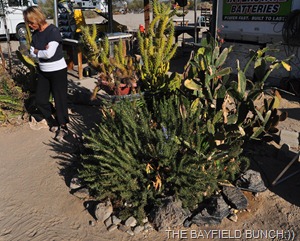 Would have been easy for some unscrupulous solar installer to pull our rig into the shop & come back half an hour later with, “yep, your batteries are shot and you need 4 new ones.”  Mike checked our batteries & said, batteries are good so that’s not your problem.  All those dollar signs I had seen floating around & about to depart into the great credit card store in the sky suddenly reversed themselves & immediately came home to roost. 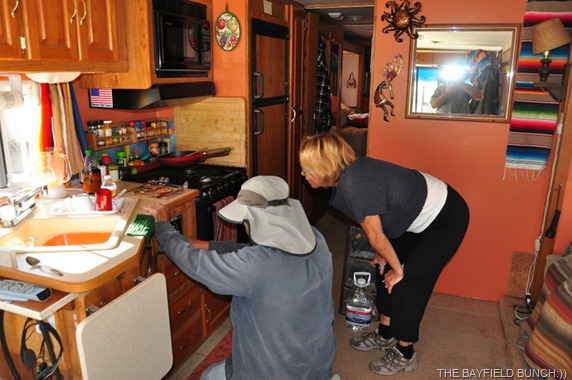 Nope, it wasn’t the batteries…..it was an inline fuse that has a direct bearing on our solar boost from our two panels on the roof.  The fuse assembly had melted itself preventing any power from our solar panels reaching our batteries.  With the installation of a new heavier duty fuse Mossmagator we were immediately up & running again in Solar Land.  Could easily have been a $700.00+ bill but thanks to Mike’s honesty we got off with a simple $35:))  Yes Toto, there are still some honest & trustworthy people left in the world.  Thanks for again treating us fairly Mike:)) 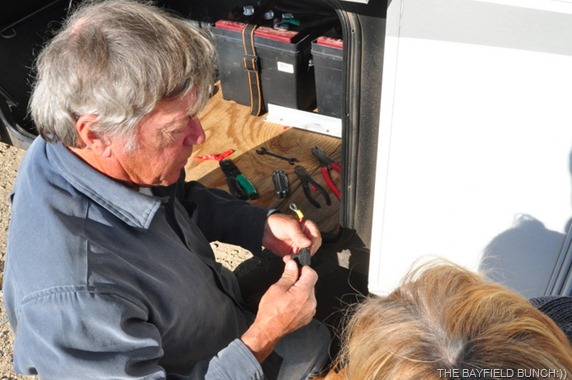 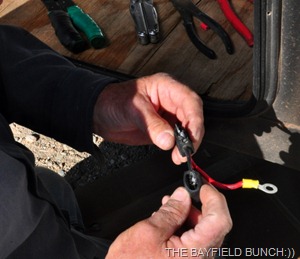 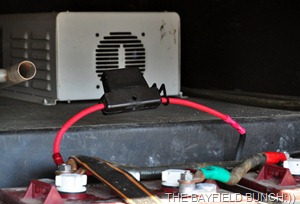 Decided we’ll hang around the Slabs for a few days & take in the amazing sights.  Well, amazing enough that tourists come here on the week-ends driving quickly through with their cameras pointed & clicking out the car windows.  If we see any going by we’ll maybe shoot em a moon or two.

Aside from a few Hello’s, maybe a couple Howdy’s & a nod of the head here & there I really haven’t spoke to anyone living at the Slabs aside from Solar Mike himself.  For a slant on the human side of Slab City I would refer you to a fellow on our sidebar.  The MOBILE KODGERS.  He has written some fine human interest stories about a few of the residents as recently as a week or two ago.  You can pick up one of his stories HERE & work your way back if interested.

I would say today is the hottest one we have experienced this winter since leaving home back in November.  What a treat it is not to have heaters on all night.  Most of our afternoon was spent in a semi relaxing Zombie like state stretched out in our anti-gravity chairs.  Groovy:)) 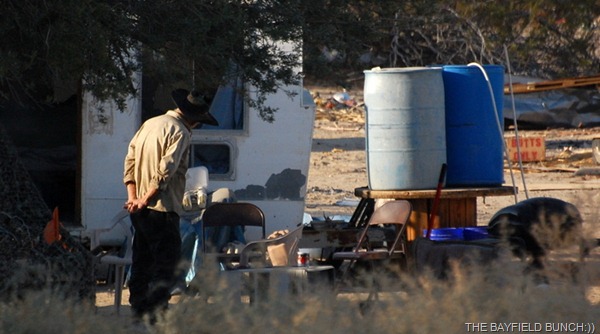 Before I forget….Leonard Knight, the creator of Salvation Mountain here at Slab City has not died.  His close friend and caregiver died recently and many confused that fellow with Leonard.  Leonard Knight, the last I heard, is in a nursing home facility.

A TELEPHOTO VIEW OF SALVATION MOUNTAIN FROM SLAB CITY

Question about how we anchor our satellite dish (when I remember to do it)  We use THE CLAW.  What I like about this device is the fact it is all metal.  No plastic parts!!  Using a simple ratchet strap the tripod can be cinched down snuggly & securely to the ground. 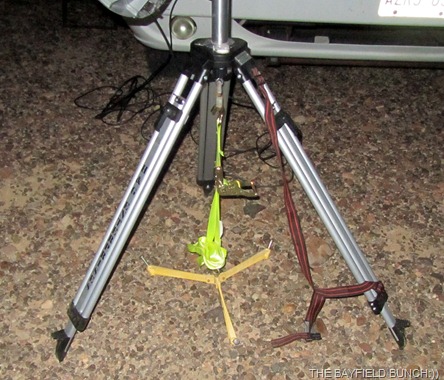 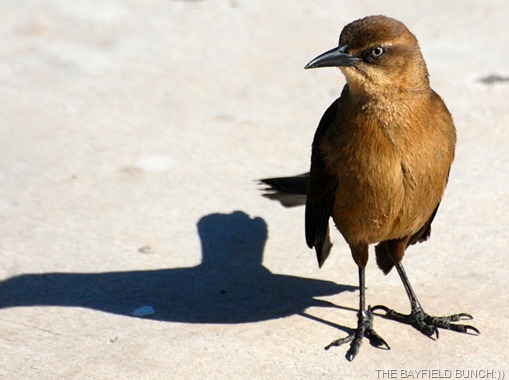 We have met some very talented Bloggers in our travels.  Some readers may remember our meeting DEBRA ARGOSY last December while at the Ranch.  Debra is on our sidebar & writes, FIND AN OUTLET.  You will find her well written posts always very thought provoking.  Debra is also a fine & talented painter.  Stop by her Gallery here at……DEBRA'S ARTWORK. 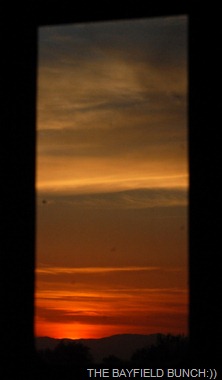 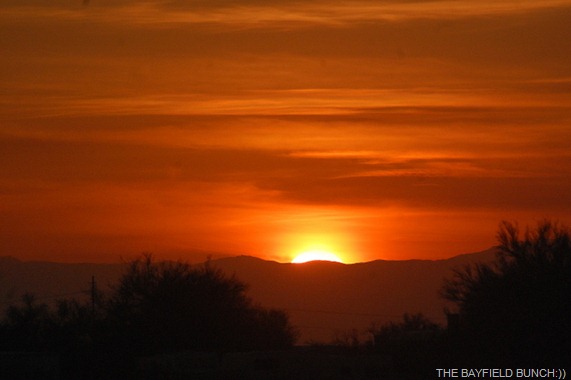