BACK TO THE LAND OF GIANT SAGUAROS:)) 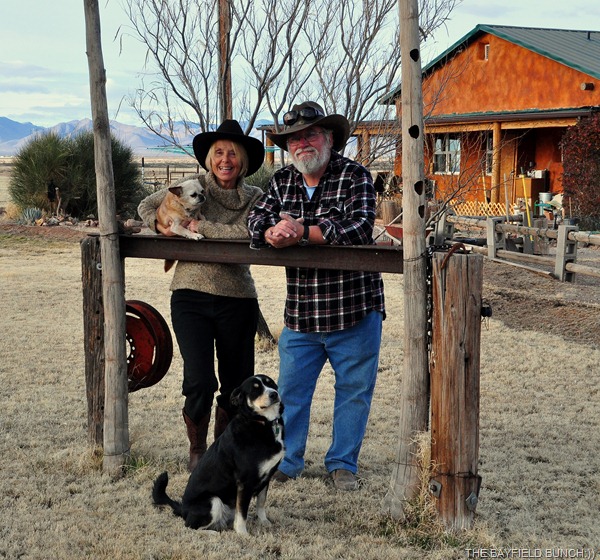 I always consider it a bonus if I am able to sleep in to 5 a.m.  Kind of sad seeing Ranch dogs Gleason & Pearce stretched out sound asleep on our living room floor this morning knowing it was the last night for now that we would have Pheebs & Motor’s best Pals in for a sleep over. 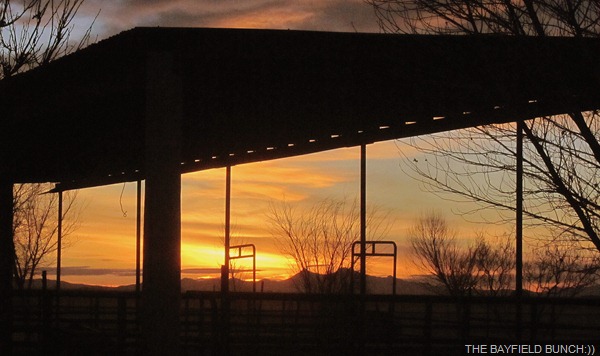 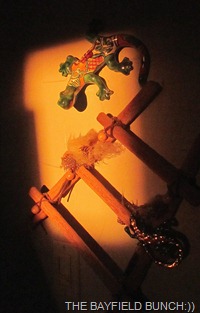 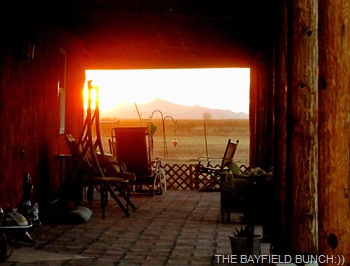 SUNRISE AT THE RANCH

Being a nostalgic kind of guy I walked around the Ranch grounds at sunrise this morning saying goodbye to the Donkeys, Charlie the Cat and the Chickens.  At this age & stage of the game and with things being the way they are these days one never knows what the future holds or if we will even be back this way again.  Plans change and temporary good-byes can be final sometimes.  On the upside….we may very well be back to the Ranch in 5 weeks:)) 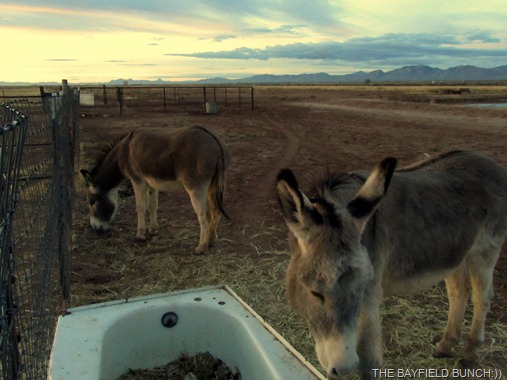 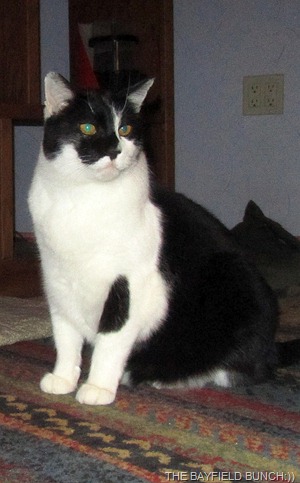 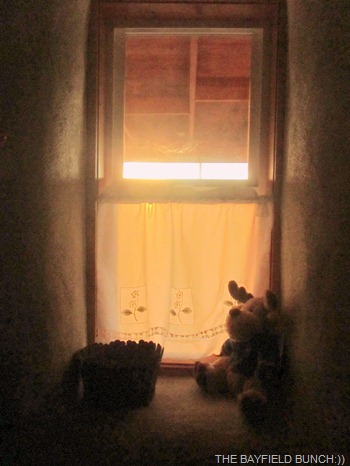 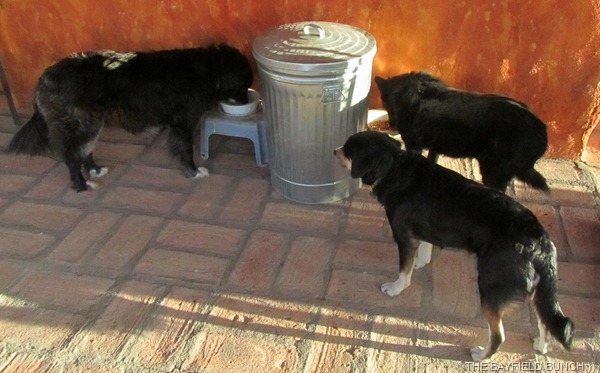 AW COME ON GUYS HOW ABOUT GIVING THE PHEEBS SOME

Had the Jeep hooked up and ready to roll by 8:35.  Terry & Martha were out with their cameras & we are grateful to them for taking a few photos of the Bayfield Bunch together as a family.  It is rare for us to be in one picture all at the same time.  We have always regretted we never did get a nice family photo of us when Max & Checkers were still alive. 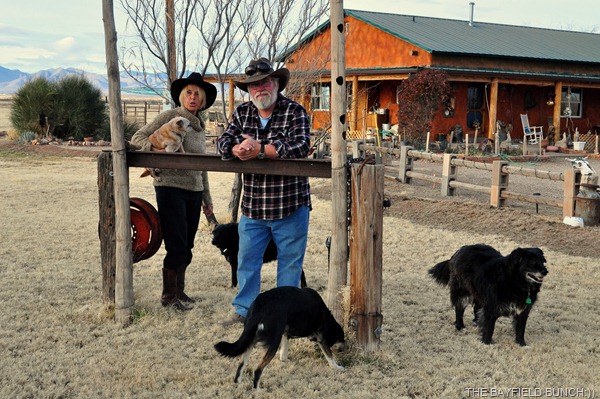 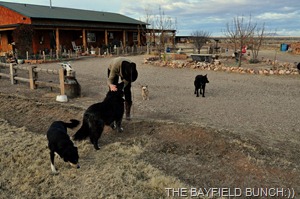 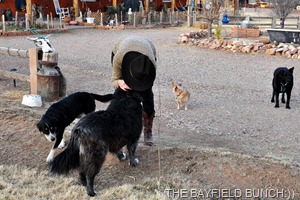 GOOD BYE SMOOCHES FOR THE POOCHES

At 8:45 it was a final round of hugs and good-byes.  Waved to Gleason & Pearce just as Martha pointed out the Donkeys were braying a loud good bye from the field.  A short minute later we were out the gate in a slow cloud of dust & headed on down the road. 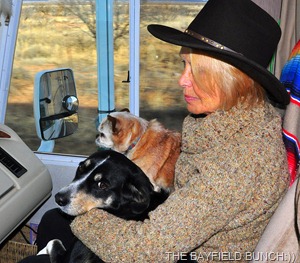 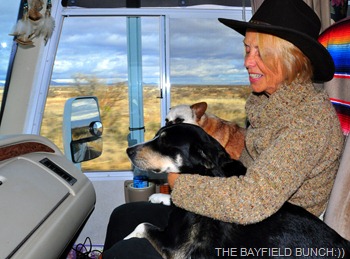 We had an interesting moody sky overhead as the rig rolled west up Davis Road.  So nice to see sun splashes playing across the Valley floor & along the surrounding mountain sides.  Slipped through Tombstone & the ghost town of Fairbank on our way to Benson & Interstate 10.  A quick stop for fuel and an Egg McMuffin at McDonalds had us on the fast track for Tucson. 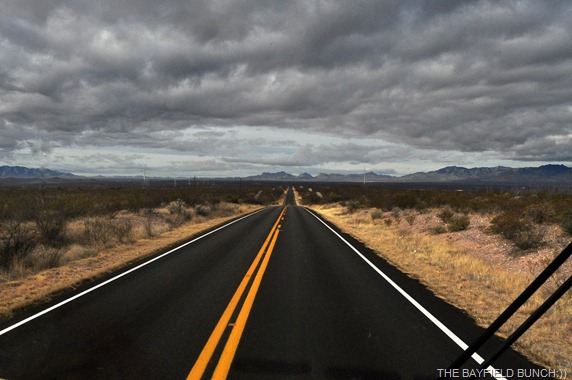 HEADING WEST TOWARDS THE GHOST TOWN OF FAIRBANK

Passed the sign for Tucson’s International Airport where we dropped Aunt Jean off a few days ago.  Passed LAZYDAYS RV where we had our new toilet installed in December and passed the nearby University of Arizona Hospital where I ended up in Emerge just over a month ago.  With two medical appointment follow-ups we got to know the neighborhood well.  In fact, our turn off today onto Ajo Way west was only a block from the Hospital.

CAUGHT A WIND MILL ON THE FLY FOR YA MIKE:))

Didn’t take us long to swing through the south end of Tucson & head ourselves back out into the desert.  Always a good feeling for me to be away from any built up city area.  We were once again on one of my favorite Arizona drives & half an hour west of Tucson we passed all the big Observatories atop KITT PEAK.  We both commented on the abundant green scenery while motoring through the Sonoran Desert with it’s countless Saguaro Cactus stands stretching over hill & dale. 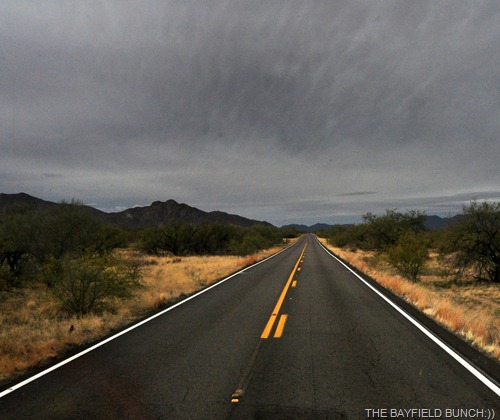 Couple of hours later we passed memorable HICKIWAN TRAILS RV PARK and rolled into Why Arizona.  This is another great memory area for the Bayfield Bunch.  A right hand turn led us up to Darby Wells road just south of Ajo and how nice to see the dust swirling up behind us again as we swung off the highway into another great scenic area full of tall green Saguaro Cactus, flower tipped Ocotillas, smooth green barked Palo Verde Trees,  prickly Teddy Bear Cholla cactus with Creosote bushes and Mesquite trees making for a welcome & refreshingly lush green landscape.  We hear the Spring flowers in this area are incredible. 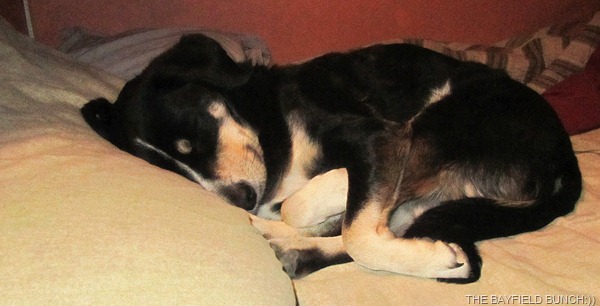 GOT US A TIRED LITTLE DOGGY TONIGHT

Was hoping our old spot from a month ago near Boondocker Rick would still be empty but I wasn’t too optimistic figuring the area would be flooded with after Christmas Snow Birds.  Coming around a bend I saw Rick’s Casita & Jeep sitting in their same spot atop a hill.  And, just south of him I could see our old spot was……empty:))  Stopped on the main dirt road & unhooked the Jeep.  Minutes later I was lumbering up a rocky loose graveled road with the Motorhome through scratchy Mesquites carefully crafting some new desert pin stripping on the sides of the rig.  I like when that happens:))  A big wave from Rick as he recognized our rig ascending the rocky road. 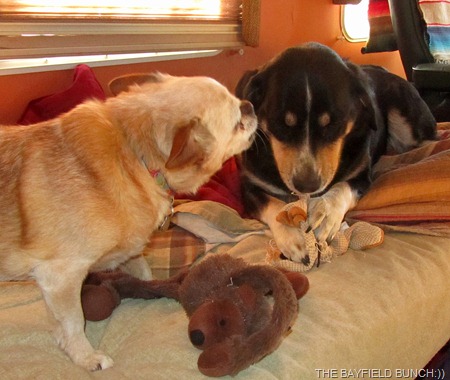 We were barely stopped in our spot when Pheebs was out the door just a running.  Coming down the hill from across the way was Ricks dog Lady and seconds later the two best Pals were jumping, jostling & jousting just like old times.  Nice to see Rick again.  Some people a feller just takes a liking to right off & Rick is one of those people I liked from the first time I met him.  He was very instrumental in helping and being a good friend to RV SUE AND HER CANINE CREW when she was here awhile back. 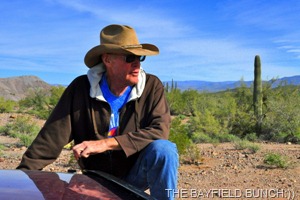 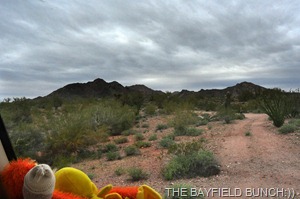 Heavy overcast & a tad cool but we are secure in the knowledge we will have warmer nights now that we have come down from the high desert where we were.  Looking forward to warmer temperatures:)) 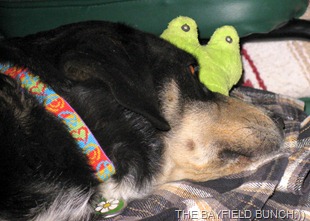 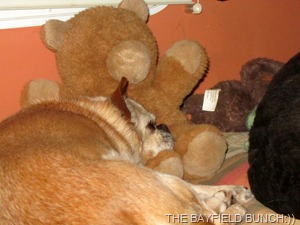 Dark now & as I look at my watch I can’t help wondering what Pearce and Gleason are doing right now………….. 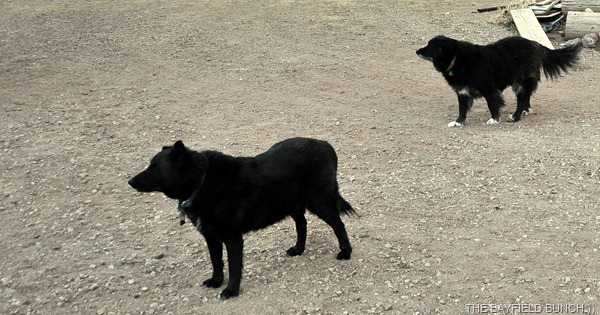 And, a special thank you to Terry & Martha from GYPSY LIFE JOURNAL for taking our pictures this morning & later including us in their Blog.  Much appreciated guys:)) 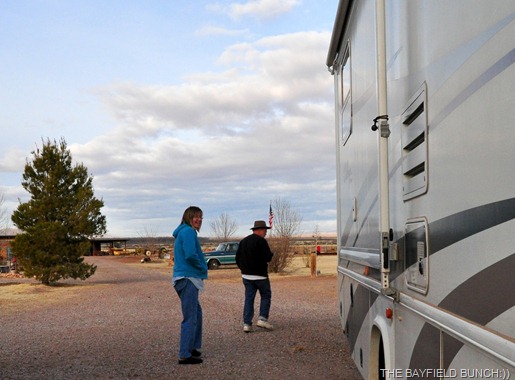 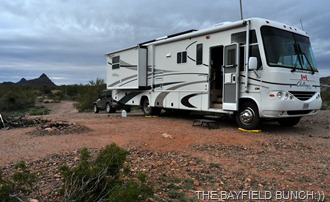 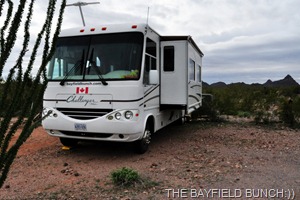 GROANER’S CORNER:((  A Ventriloquist with his dummy on a knee starts his act. One bit requires his dummy to tell Dumb-Blonde Jokes. After a few jokes, an angry blonde woman finally stands up and starts speaking her mind.
"I have had it with the stereotyping of all blondes being stupid!" the woman yells, and she continues ranting on about this.
Finally, the ventriloquist says, "Sorry ma'am ..."
The woman cuts him off by saying, "You stay out of this. I'm talkin' to the dummy."