THE LAZY W RANCH….A WALK AROUND SOME OLD MEMORIES TODAY 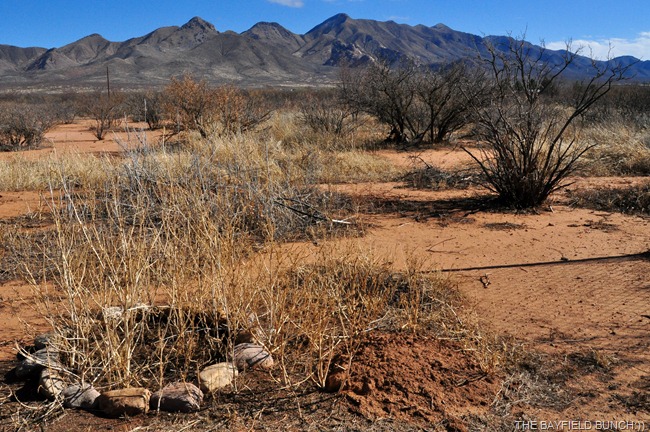 It was encouraging to see a brighter sun in our dawning sky first thing this morning and how nice it was to feel yesterday’s cold winds had subsided.  Pheebs and I did the morning chores and how good it felt to be getting some needed exercise as we checked the security fence line around the long perimeter.  I saw the corrals needed a cleaning so that will be some welcome additional exercise for me.  I don’t mind working with Donkey buns:)) 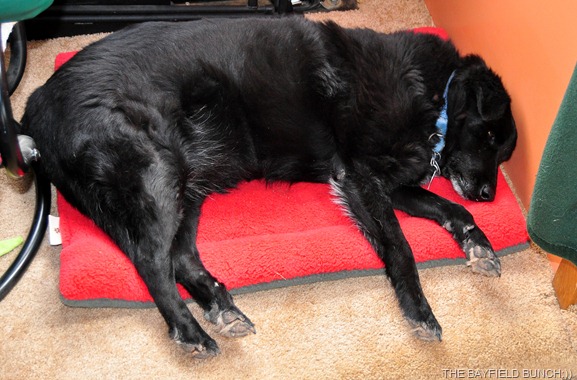 Seems I have mixed up my Bandy’s with my Banty’s.  Bandy’s might be a short term for something to put on a cut finger but Banty has something to do with attitude and swagger.  Had referred to my little ‘Attack Rooster’ in Monday’s blog as a Bandy Rooster.  Commenter Glenda questioned the spelling and of course that sent me scrambling off to Google.  Here is what I found.  ‘Banty is short for Bantam.   In addition this term is used to describe the behavior of some short men who may tend to walk with a swagger and adopt a somewhat exaggerated male posture.’  Yep, this sure sounds like my feisty little Buddy in the chicken coop alright and yep, it sure sounds like some short men I have known too. 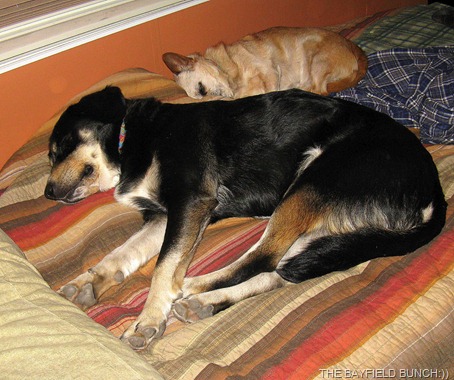 THE PALS WHO PLAY TOGETHER, SLEEP TOGETHER >>>

Jeeps gas tank was going on empty so we headed over to the little town of Elfrida late this morning.  I like the gas station there because it is a no brainer.  Just drive up, lift the nozzle and put your gas in.  Walk inside and tell the guy how much you put in and that’s it.  No annoying computers in the gas pump wanting your area code, name of your first born, how old your Sister’s younger Brother is.  Just put your gas in, pay for it and go.  Now, how easy is that.  Just like yesteryear.  But, then again Elfrida Arizona itself is just like that.  It’s a tired and dusty little town that time really hasn’t, or hopefully never will, catch up with.  It’s my kinda town…..and I like it. 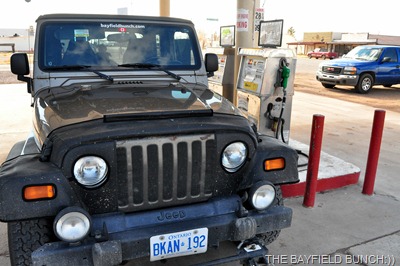 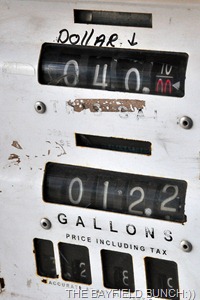 Half a dozen back streets, a gas station, post office, hardware, couple little restaurants and maybe a dozen buildings on main street with probably a third of them empty.  Sage Brush tumbles down the main street and horses might be tied up outside the High Lonesome feed store.  Nothing fancy in Elfrida.  Not enough traffic for a light.  Maybe not enough electricity for one either.  But, I do exaggerate a bit.  However,  it’s an exaggeration that fits well with the once bustling little town which once boasted a large Cotton Gin.  What’s left of the Gin is still there but the Cotton Gin folks have moved on.  Prosperity in Elfrida has moved on as well and most folks in town just kind of hang in and try to make the best of what they have.

Nice medical facility, community center and cozy library at the north end of town.  Fire station and Police Department at the south end.  A few churches and a nice school.  Even the founders of the town never left.  They are buried near the Fire Hall.  Elfrida’s not most folks cup of tea but it fits right into my little world quite well.  As I said, nothing fancy here:))

While in Elfrida we stopped at the library because Kelly has a library card here and we usually stock ourselves up some good reading material.  For me, that is local history of the surrounding areas here in the Sulphur Springs Valley.

Some blog readers may remember last winter when I fell in love with a dusty little tumble down and tumble weed Ranch property here in Cochise County.  We boon docked on the ‘For Sale’ property for about a week back in February.

I wrote about the Ranch each day we were there at the time and I also wrote about how I felt about it after returning to Ontario in the Spring.   If you go to, ARIZONA'S SULPHUR SPRINGS VALLEY KINDA GROWED ON US you can read my May post.  Just scroll down and begin reading under the Mule Mountains photo.

I felt exactly the same way today as we once again made our way east of Elfrida along the bumpity road to the Lazy W Ranch.  All the feelings came right back for me as we rolled up the dirt driveway to the empty little adobe brick house.  Nothing had changed except it just looked a little more tired and forlorn than I remembered it.  We were so glad to see that it had not been vandalized yet. 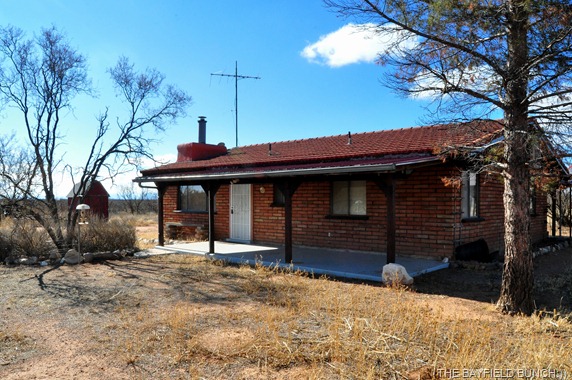 MAYBE DOESN’T LOOK LIKE MUCH TO MOST FOLKS BUT THIS HOUSE, PROPERTY, AND LOCATION SPOKE TO ME 10 MONTHS AGO, AND STILL SPEAKS TO ME TODAY…………………….

We walked around the property and my mind picked right up where it had left off last winter.  All the thoughts and plans were still there, fresh in my mind.  The perimeter fencing, new irrigation ideas, all new landscaping, an RV idea, etc. etc. etc.   But, also in my mind was the same realization we came to back in February.  The Ranch dream was just not going to happen then and it is still not going to happen now.  The $145,000 dollar price tag is even more unrealistic today than it was 10 months ago.  As real estate prices continue to fall in the economically stressed Valley the price tag on the deteriorating vacant 80 acre Ranch has not kept pace with the down turning reality of the Real Estate market. 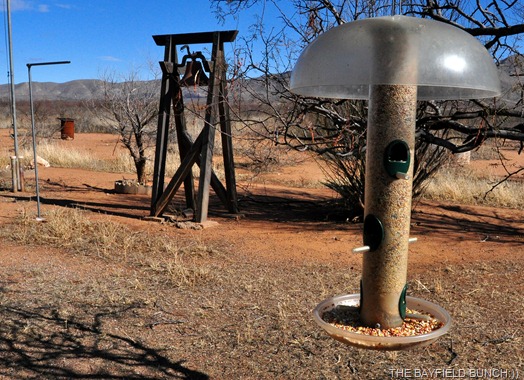 It was sad for me to once again turn my back on the little Ranch, climb in the Jeep and head back on out the driveway for probably what will be the last time.  I am such a sentimentalist.  And sometimes, I am such a Dreamer……………… 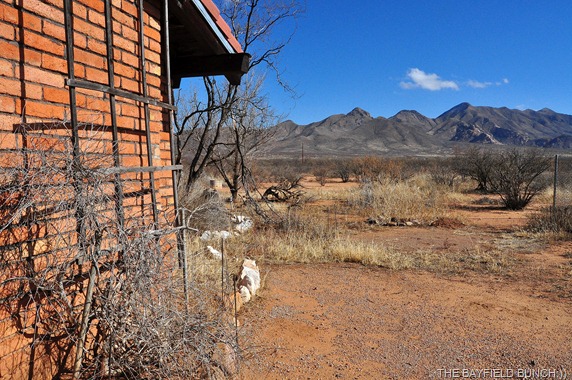 We were notified by Facebook yesterday that the second AL’s profile (the hacker) has been eliminated. If you feel you have been hacked by this SOB, notify Facebook immediately and start the process to have your hacker and his phony profile impersonating you, dealt with by Facebook.

Pheebs and I finished up the day by cleaning up some Donkey bun piles around the corral.  Lots more to pick up but we have made a start.  Bright and early in the morning we head for the University of Arizona’s Medical Center in Tucson Arizona.  I have a 10 a.m appointment with a Urologist to discuss this mysterious kidney stone of mine and what, if any action needs to be taken. 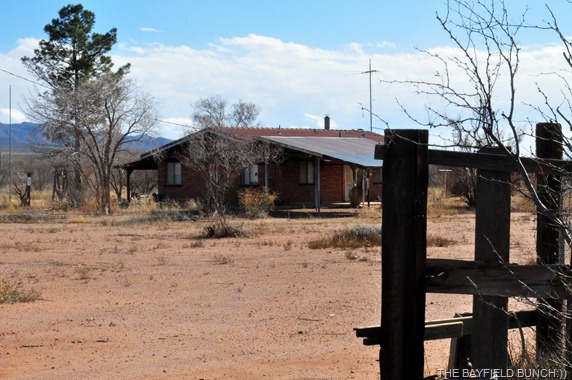 GROANER’S CORNER:((  What's the difference between outlaws and in-laws?
Outlaws are wanted.