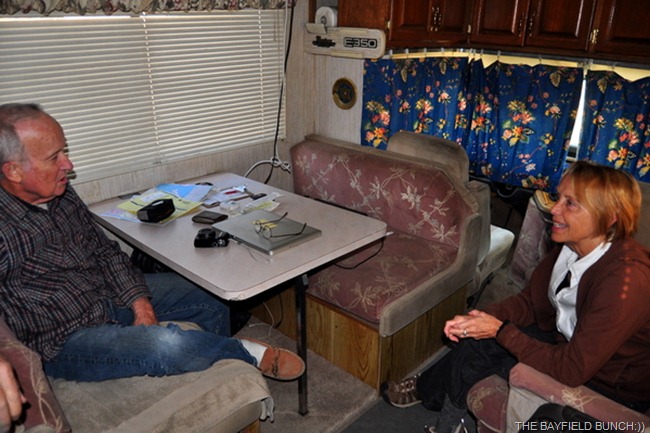 When I stepped out of the rig this morning with Pheebs and Motor I could see stars from horizon to horizon and that could only mean one thing.  Our previous day’s heavy cloud cover had dissipated.  With sunrise only an hour or so away I knew we were going to be in for a sunny start to the day.  The weather people had been calling for clouds and rain. 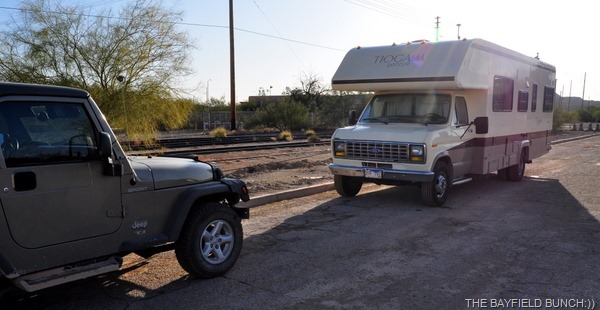 WE FIND TIOGA AND GEORGE TUCKED QUIETLY AWAY NEAR DOWNTOWN AJO
We were on a mission this morning because Kelly had noticed someone well known and well respected to the RV Blogging community had rolled quietly into Ajo the night before on his way to Mexico. 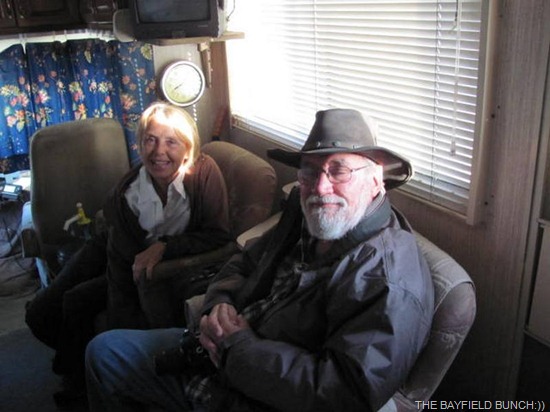 I BORROWED THIS PHOTO FROM GEORGE’S BLOG
I think Kelly’s words in Facebook today sum up our meeting with TIOGA GEORGE.  She said, “He is just what I expected. A quiet, gentle, genuine nice person.”  I couldn’t agree more with Kelly as we sat in Miss Tioga chatting with George for about half an hour this morning.  A very personable fellow indeed and if you look carefully he is one of those fellas with a quiet twinkle in his eye and a warming smile to make you feel welcome:)) 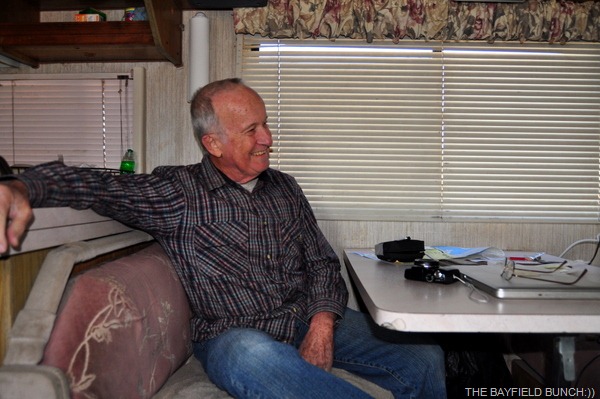 A REAL GENUINE PERSONABLE FELLOW
With over 6 million hits on his Sitemeter you can see George has been around for awhile and a very popular RV Blogger.  We probably started following his site as far back as 2005.  Tioga George is a true pioneer here in Blog Land and has been the inspiration for countless Bloggers who have followed in his footsteps.  George was blogging about his RVing adventures when many of us were still wondering what RV meant.  We considered it a true honor this morning to meet the fellow who may well be considered the Granddaddy of the RV Blog world. 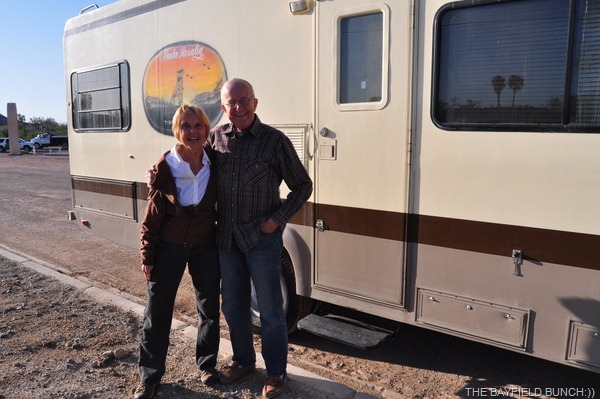 I WAS SO BUSY TAKING PICTURES I FORGOT TO HAVE MY OWN PICTURE TAKEN WITH GEORGE
Better get to my almost daily now, ‘corrections segment’.  In Thursday’s post I said the A-10 Thunderbolt (Warthogs) pilots were based out of Yuma but Emjay quickly corrected me saying no, those Warthogs are based at the Davis Monthan Air Base in Tucson.  I have been to the Museum section of that air base.  Second correction comes when I said Kelly was on Skype talking to Verizon.  Yes, it was Skype she was using but it was the TV satellite people at Shaw Direct she was talking too.  I have since corrected those two things. 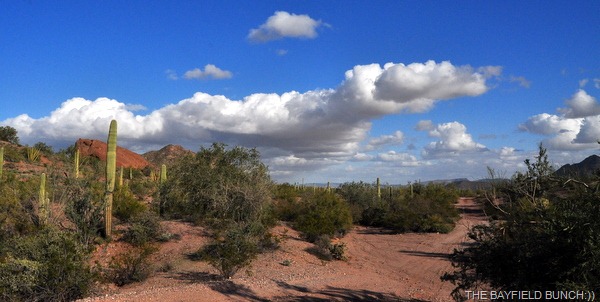 There is a bit of confusion about my posts publishing dates.  I normally publish my blogs on the day I write them but due to our weak Verizon connection my posts can sometimes take hours to publish and that puts them into the next day.  So a post I write on the 12th may take a couple hours and publish and show up as the 13th.  I do not type in the dates….they go in automatically. 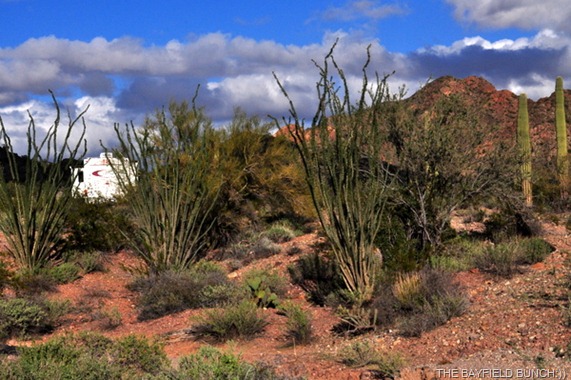 OUR RIG SITS COZILY AMONG THE TALL GREEN OCOTILLOS
Had some questions about Coyotes and Snakes while boondocking.  Coyotes are always a main concern and we are ever vigilante for them.  When choosing a boondocking spot we try to have an area of clearance and unrestrictive viewing around us so it is harder for something to sneak up close without being seen.  We never let the dogs out by themselves and if they have to go out in the night I go right out with them carrying a powerful flashlight.  While they are doing their business I am scanning the area with the light looking for any sign of two bright green eyes staring back.  We have never encountered an active snake in the 5 years here in the Southwest.  Most of them are underground in a hibernation state at this time of year but they are never far from my mind while hiking.

AFTERNOON WALK ON ONE OF THE JEEP ROADS
Wandering Willy sent us a link for a device called a Wilson Sleek.  This antennae oriented device is used for boosting a Verizon Mifi signal.  We will look into that. 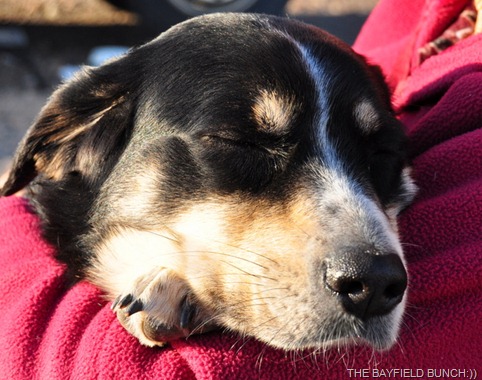 PHEEBS ASLEEP ON KELLY’S LAP BESIDE THE CAMPFIRE THIS AFTERNOON
Had a comment question last night about the Border Patrol and security in this area.  Anywhere in the Southwestern States of Texas, New Mexico, Arizona or California there are a lot of Border Patrol personnel and vehicles and seeing them is commonplace.  The Border Patrol is everywhere.  You may encounter them at checkpoints on the highway, at the local grocery store, parked along lonely stretches of desert highway, having lunch at a popular restaurant or heading out into the desert on horseback, ATV, or pickup trucks.  We have been buzzed by Border Patrol helicopters while walking out in the desert near Hickiwan Trails.  The Border Patrol is a part of the community with a job to do and in many cases an integral part of a communities economy. 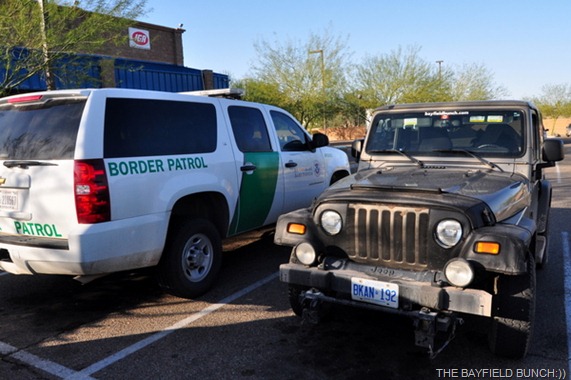 PARKING LOT OF OLSEN’S IGA IN AJO, ARIZONA
As far as safety goes we have never felt or been threatened at any time in our travels by any illegals moving through the area.  The last thing people coming up from Mexico want, is attention.  They will go out of their way to avoid you spotting them.  Likewise, the drug smugglers do not want to draw attention to themselves either.  I feel much safer out here in the seemingly middle of nowhere than I would in the downtown of any large city. 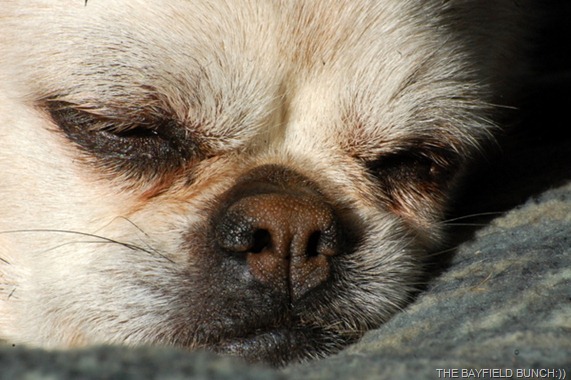 IT’S A SLEEPY CREW WE HAVE HERE SOME DAYS
The American Air Force was busy this morning and we had many unseen fighter jets in the sky high overhead all morning.  At 10:25 a.m. I was outside and Kelly was at the computer.  Suddenly, without warning 2 of the loudest simultaneous explosions occurred somewhere over our heads.  Those explosions were followed milliseconds later by the sounds of the original explosions echoing back from all directions as the sound waves rebounded back into the valley off the surrounding mountains.  I could hear the roar continue down the valley to the south. 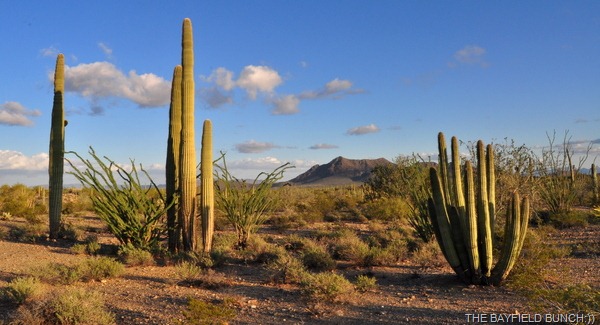 OUR SIDE YARD…JUST ONE OF THE MANY GREAT PLEASURABLE ADVANTAGES OF BOONDOCKING
I’ve heard the loud crack of exploding fireworks and this was like that but a whole lot louder.  I immediately looked to the sky expecting to see a couple puffs of smoke but there was nothing.  I then scanned all around us expecting to see some smoke or dust somewhere but nothing.  I was convinced the double bang was explosives but then it occurred to me…could one of those jets high above have broken the sound barrier and what we heard was a double sonic boom.  The sound we heard was more of a crack than a boom though. 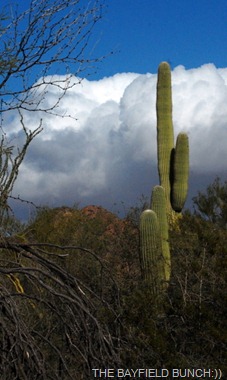 Hearing the distant ‘pa-rump’ of heavy explosives over in the Barry M. Goldwater Range about 10 or 15 north of us is commonplace here but whatever this was, occurred much, much closer than that.  Seemed to be right overhead.  Anyway, I don’t suppose we’ll ever know but 20 minutes later a second loud bang occurred somewhere in the sky nearby.  And then the planes were gone from the sky and all was quiet once again until mid afternoon when 7 A-10 Thunderbolts (Warthogs) flew overhead heading for the Goldwater range.  Oh, and then there was the low and fast flying white helicopter that flew directly over us. 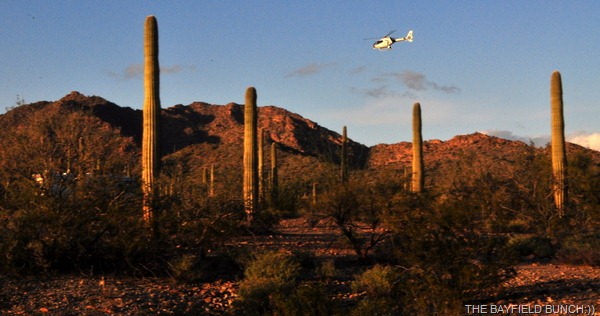 THAT’S OUR RIG HIDING OUT ON THE LEFT AS THE CHOPPER FLY’S LOW OVERHEAD
Two new Blog Followers to day.  Welcome aboard to BSG and STEVE KEITHLEY.  Thanks for stopping by folks. 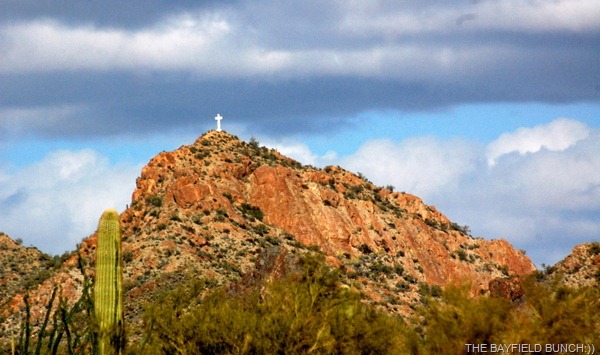 MANY SMALL WESTERN TOWNS HAVE A WHITE CROSS ON A NEARBY MOUNTAIN TOP, JUST LIKE AJO
Our black tank is ready to be dumped so we’ll be rolling out of Darby Wells in the morning.  Our intention was to head on down to the Patagonia area south of Tucson….until we checked the weather report.  That area of Tucson is known as the high desert and is over the 4000 foot elevation level.  They are getting rain and SNOW there right now so that put the ky-bosh on our plans real quick!!  We will dump our tanks at Coyote Howls in Why tomorrow & then probably slide a couple miles down the road to the 2 mile marker BLM land for a few days until the weather straightens out in Patagonia.  Well, that’s the plan for now anyway. 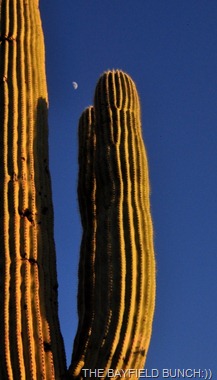 IF YOU LOOK CLOSELY YOU CAN SEE THE HALF MOON IN TODAY’S LATE AFTERNOON SKY
Our morning was spent packing up the rig, putting outside mats and tables away, etc.  Turned out to be a quiet afternoon with a couple leisurely walks in the desert.  Soaked up some warming Arizona sunshine and relaxed to the haunting guitar sounds of my favorite guitarist of all time, WILLIAM ACKERMAN. 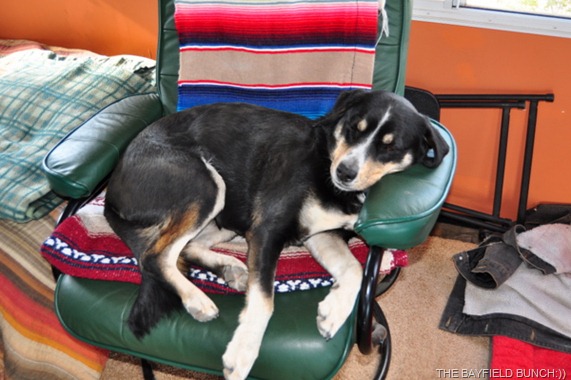 And, would you believe we had 1,124 hits on our Sitemeter today.  And why so many?  Tioga George, that’s why:))  Just goes to show what a popular and wide read fellow he is.  A good percentage of those hits on our site are a direct result of George mentioning us in his blog this morning.  Thanks for the boost George….you’re a neat-o guy:)) 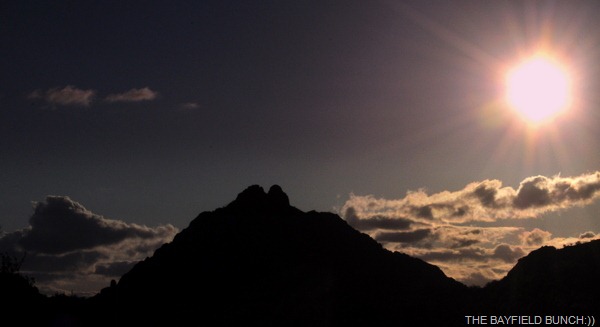