THIS BRIDGE OVER THE MISSISSIPPI RIVER MARKS THE STATE LINE BETWEEN ILLINOIS AND MISSOURI
First thing I heard upon waking this morning was rain on the rig’s roof…not good!! Second thing I heard was wind in the tree tops and that was not good either. Third thing I heard was a happy little dog waking up in the chair beside my bed. Now, that was good:)) 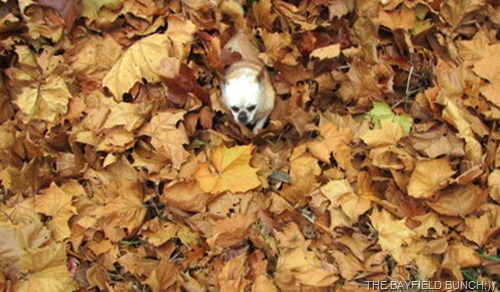 LITTLE MOTORMOUSE PLAYING IN A PILE OF LEAVES THIS MORNING AT FERNE CLYFFE
We have moved to Central Time now so instead of waking up at 4:15 I was wide awake at 3:15.  Yep, knew right then and there it was going to be another long day.  But not a long boring day like at home.  Can’t even begin to tell you how great it is to be back in my element and on the move again.  Halleluiah Brother:)) 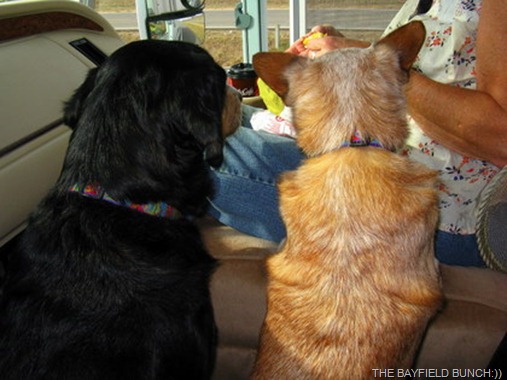 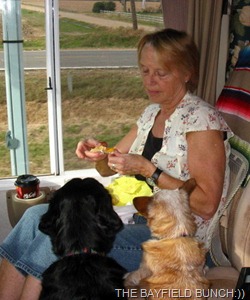 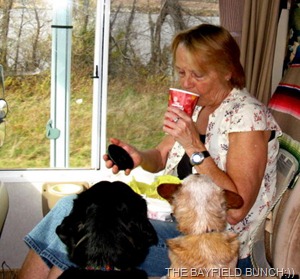 BREAKFAST AT OUR HOUSE THIS MORNING
Couldn’t believe how warm it was first thing this morning with the temps later in the day reaching 80F.  The rain ended long before we had the wheels rolling at 7:45 but the heavy cloud cover stuck around.  Still big wind gusts but knew we should be OK all the way down I-57 to the bridge over the Mississippi because of the sheltering forests.  We crossed that bridge at 8:35 into Missouri’s flat farmland heading in a westerly direction.    As expected this brought us broad side on to the southerly cross wind again which beat us up pretty good for about 30 miles before reaching I-55.  We were able to swing our nose back into the wind again heading south all the way to the west side of Memphis. 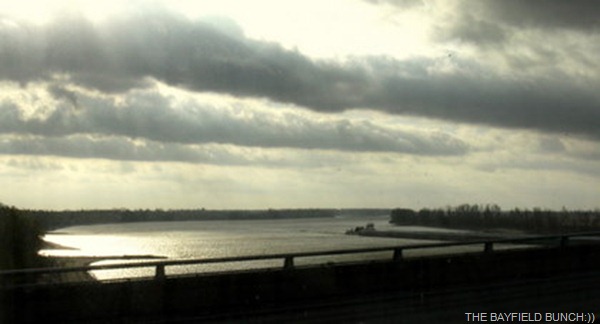 LOOKING SOUTHWARD DOWN THE MISSISSIPPI RIVER WHILE CROSSING THE BRIDGE TO MISSOURI
Upon nearing Memphis we swung off the I-55 ramp at 11:30 landing ourselves on I-40 heading west.  As mentioned before, this is always a pivotal point in our trip and switches us from our north/south part of the trip to our east/west part of the trip.  We now have the great American Southwest in our crosshairs.  Quite often in the past when I referred to the Southwest I was in the habit of mentioning only New Mexico, Arizona and California.  I should have been including the great State of Texas all along and from here on in I will do just that. 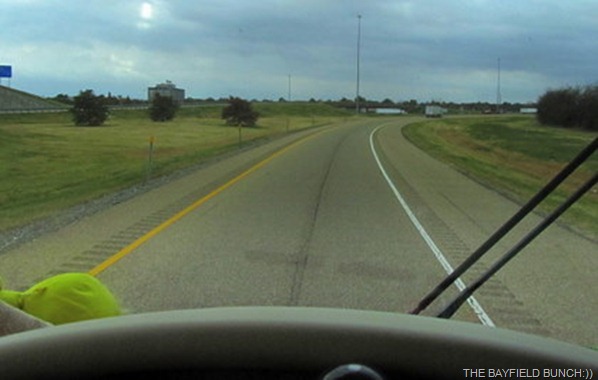 THIS IS THE RAMP FROM I-55 TO I-40 WHICH HEADS US STRAIGHT FOR THE SOUTHWEST
The winds began to back off around noon and I actually kicked on the dash Air.  We had a mixture of sun and clouds as we approached Hazen Arkansas about 40 miles east of Little Rock around 2 p.m.  There is a little RV Park called T-Ricks right off I-40 that we have used maybe half a dozen times over the years.  The Park has fallen on hard times but we like it because there are usually not too many people there.  T-Rick’s is also a CITGO fuel stop so we decided to call it a day, gas up the rig and stay for the night.  I had my first huge black tank disaster late this afternoon but I am not going to even mention that!!! 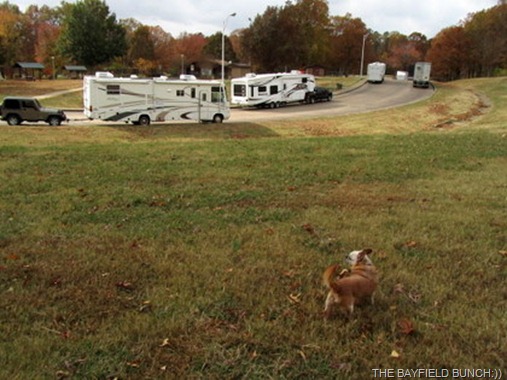 PIT STOP AT AN ARKANSAS REST AREA WEST OF MEMPHIS
New bloggers Rick and Kathy Rousseau from IT'S ABOUT TIME have just joined us on our Blog Followers list and we welcome them aboard for this years adventures in the Southwest.
And, a big shout out to fellow RV’ers back home in that there Seaforth town.  Ron and Gloria Riley will soon be on the road for Arizona’s Superstition Mountain in their 34’ Carriage Fifth Wheel.  Happy trails guys and don’t forget to drive the Apache Trail when you are there.  If you type Superstition Mountain or Apache Trail into our blog sites search bar you can see our pics and blogs from our time spent in that area.
Now, to answer the comment question regarding our route. Yes, swinging west on I-70 and heading on down through St. Louis and Oklahoma to Arizona is technically shorter, but is it. First, I have an aversion to large cities and we’ve driven through St. Louis a couple times before and that was enough of that!! No need to reach Arizona through Albuquerque NM or the traffic chaos of Phoenix either because it is southern Arizona we are now heading for. By running south on ‘big city free’ I-57 and I-55 we hook up with I-40 west of Memphis to Little Rock Arkansas and I-30 to Texarkana. By then we are already further south and in line with Southern New Mexico and Arizona. We detour north around Dallas through Gainesville Texas and pick up a quiet two lane road leading to Jacksboro where we pick up highway 380 all the way to Tularosa New Mexico. I like 380 with it’s tired little dusty western towns along the way, people free rest areas, lite traffic, a couple of free county parks and easy access over the mountains through the Apache Pass.
And, I have a correction to Saturday’s post. I mentioned it was a router we were having problems with not getting on-line but in actual fact it was our Verizon modem. Not the modems fault but ours. Having not used it since last March we forgot to charge it and then failed to remember about the ‘on/off switch. Yikes, these aging memories of ours!! All is well now and our internet access is working fine. Lots of TV channels accessible by antennae on this side of the country too.
Tuesday morning we will mix it up with the Little Rock traffic, but we generally get through there without any trouble anyway.  There is a Cracker Barrel in Texarkana we have frequented in the past so I have a feeling we just might re-frequent it again in the morning.  Texarkana sits on the State Line between Arkansas and Texas and it is here where the landscape begins changing. 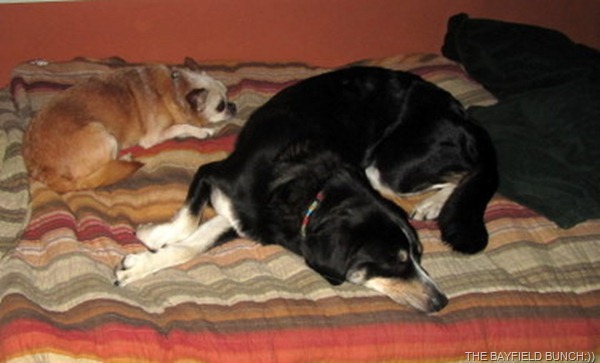