Let me first give you a few statistics of the an area we traveled and hiked in today just west of Ajo Arizona.  The CABEZA PRIETA is the 3rd largest Refuge area in the United States outside of Alaska.  It is 60 miles long by 26 miles wide and encloses 860,000 acres.  The Refuge shares a 56 mile border with Mexico.  Temperatures here can reach a hundred degrees for 90 days straight in the summer months.  Hundreds of people and countless animals perished crossing the Cabeza Prieta during the 1849 California Gold Rush. 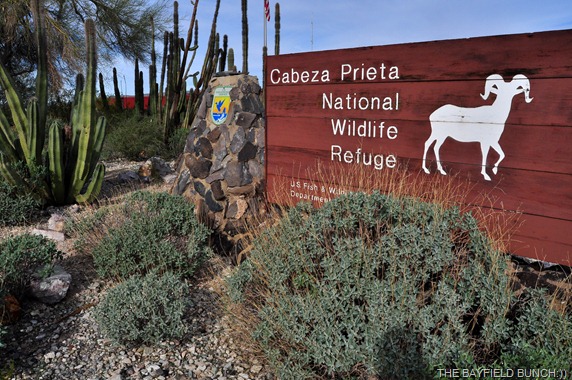 We set out on the late side this morning arriving at the Cabeza Prieta Visitor Center about 9:40.  Forms had to be filled out before we were issued our permits to travel on the Wildlife Refuge and a 20 minute video was recommended prior to heading out. 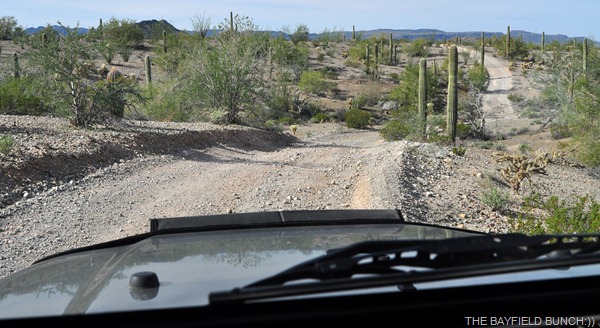 At 10:20 we left the smooth pavement of Rasmussen street in Ajo and headed out on the long dusty 17 mile gravely and rutted road to Charlie Bell’s Pass.  This road is rough with sections of washboard that will scramble your shorts.  Many dry sandy washes are crossed and a few sections of road were partially washed out but navigable.  I was glad we were driving a 4WD Jeep. 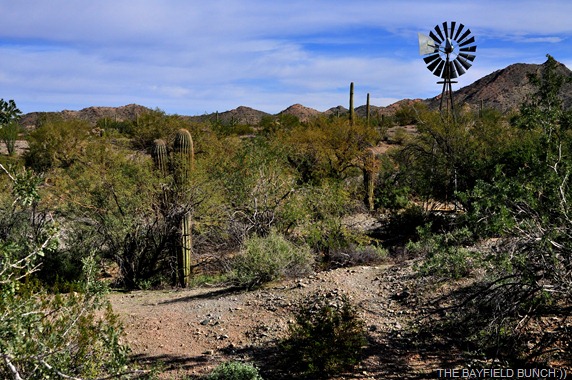 FOUND ME A WINDMILL FOR YA MIKE
I would say the first two thirds of the tire bruising road are the best with the last third being very rock infested.  This last section of road will definitely have you leaving some of your vehicles rubber behind in the Prieta. 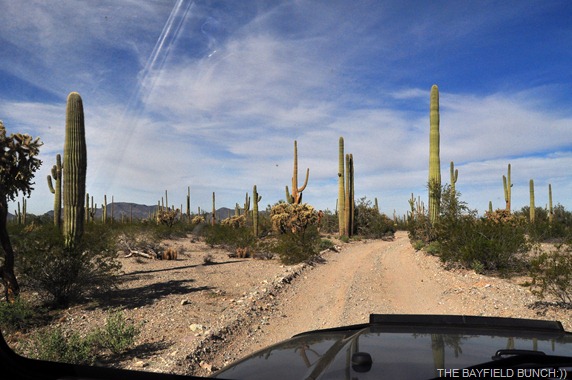 Lots of Saguaro Cactus and Cholla plants along the way and the drive is scenic but if you want more scenic, less bumpy, and a much shorter drive I would recommend you do the Darby Wells loop drive which also runs out of Ajo and is just south of the Wildlife Refuge. 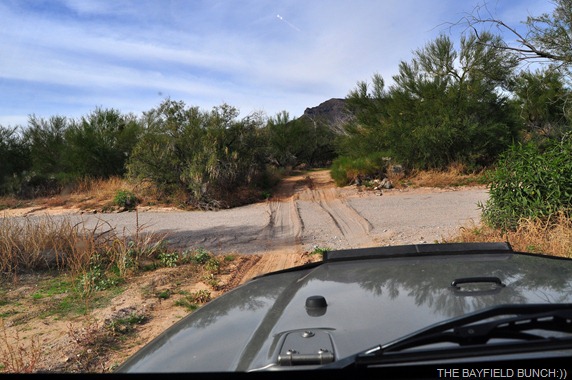 At times on this road I was in the bottom end of first gear crawling along over the rocks or easing down into or out of rutted dry washes.  It took us one hour and 40 minutes to travel 17 miles to the trailhead at Charlie Bell Pass. 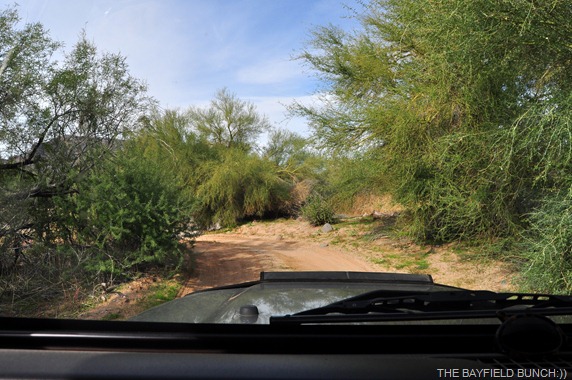 We had not thought this out very well because it was sliding into the hottest part of the day and here we were about to descend on foot down a rough and rugged trail leading a long way below to the floor of Growler Valley between a gap in the Growler Mountains.  It is reported that famed naturalist writer Edward Abbey is buried somewhere in the Growlers just to the south of where we hiked today. 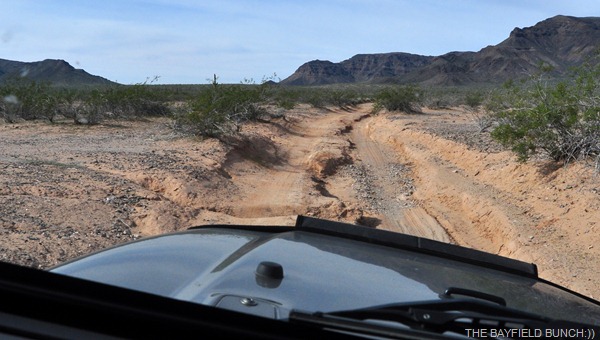 Our downward trek was a mile and a half of ankle twisting loose gravel, rocks and small boulders.  Very few flat level sections anywhere.  We reached the Valley floor and kept plodding west. We were hoping to eventually reach a windmill and a bunch of nearby Petroglyphs. 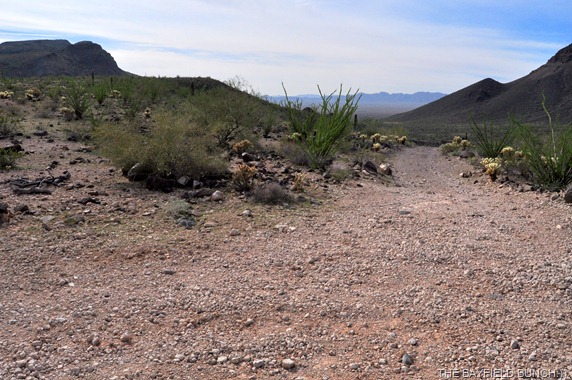 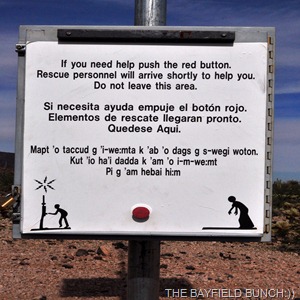 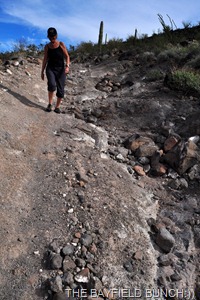 We were told by the Ranger at the Visitor’s Center this is an active area for Mexican illegals moving through the area and if we see any unusual activity around the well we were to turn around immediately and return back up and out of the Valley.  We figured we had gone about a mile and a quarter when our hike came to a halt. 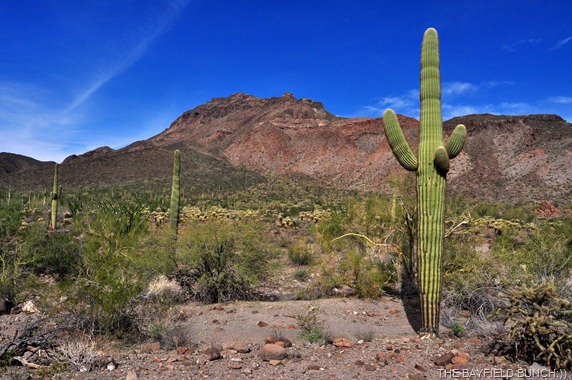 LOOKING ACROSS GROWLER VALLEY TO THE NORTH GROWLER MOUNTAIN RANGE 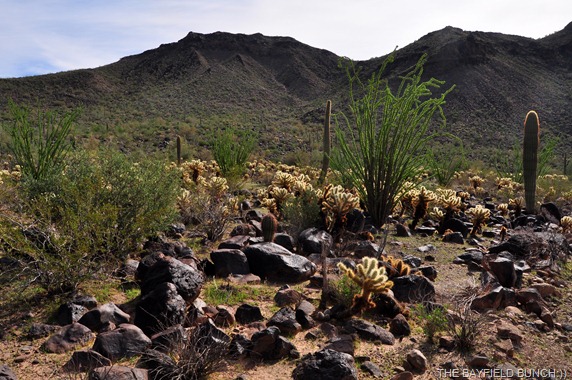 IT IS SAID THAT WRITER EDWARD ABBEY IS BURIED UP THERE SOMEWHERE IN THE SOUTH GROWLER MOUNTAIN RANGE
There was Border Patrol personnel and vehicles ahead.  Not wanting to walk into something we shouldn’t be walking into we decided to quietly turn around and return from whence we had come.  We figured Border Patrol activity way out here in the middle of nowhere constituted unusual activity. 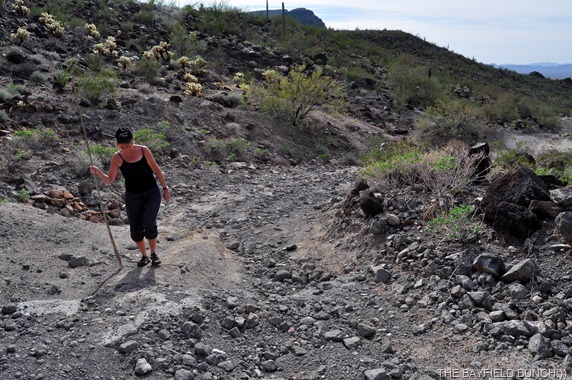 A RATHER TREACHEROUS TRAIL TO HIKE
It was a hot exhausting climb back up that rocky trail with the warm mid day sun on our backs and no cooling breezes to cool us off.  Took a short break about two thirds of the way up and then made the hard slog for the top along the steepest and ruggedest part of the trail.  Needless to say we were happy to see the Jeep hove into sight and how great it was to take off the two heavy cameras I was carrying and flop into the soft cushy Jeep seat. 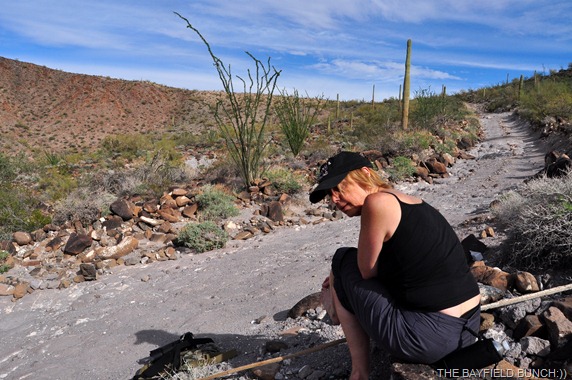 LAST REST STOP BEFORE THE FINAL AND HARDEST PART OF THE TRAIL TO THE TOP OF THE RIDGE
We didn’t waste any time sight seeing on the way back out of the Refuge and it only took us 50 minutes to reach Ajo.  We had been away from the doggy guys back at the rig longer than anticipated and we were anxious to get back.  It was the longest time we had left Pheebs so far.  We knew Motor would be fine but we were a little concerned about the Pheebs.  Let’s just say we had the desert hammer down and had a fun and super bouncy drive back through the desert to Ajo:)) 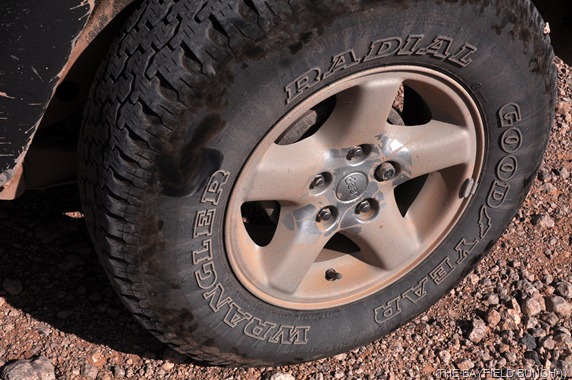 YEP, WE SCUFFED UP A FEW TIRES TODAY ALRIGHT
Glad to get back to the rig and find the gang just fine.  Pheebs had managed to pull a few potatoes out of a closet but other than that everything was honky-dorry.  It’s always a great big happy and slurpy reunion every time we come home. 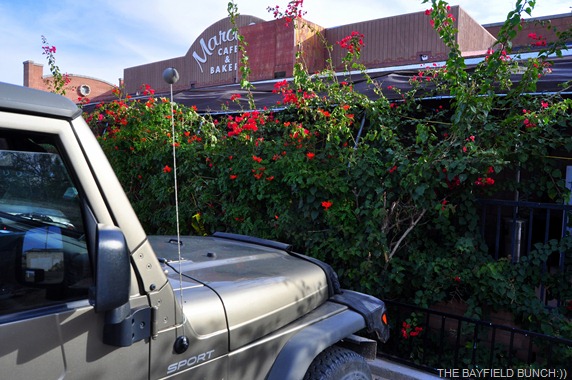 A QUICK STOP AT MARCELA’S CAFÉ FOR A QUICK BITE ON THE WAY HOME…BURRITO FOR KELLY AND A BURG FOR AL:))
And, a few words about Monday night’s blog.  It has been brought to my attention that from time to time I get myself just a little too over the top, a little too enthusiastic, and a little too excitedly opinionated about my love of the boon docking lifestyle.  It has been suggested it is a topic I talk about too much.  Reluctantly, I have to agree and it’s a topic I will try to curb my enthusiasm and opinions about in the future.  Sometimes some of us fellers have to have a few things pointed out to us now and again eh:))