A GOOD FLUSH, A GOOD BURG, LOTS OF BIRDS, AND WILL IT BE TRUTH OR WILL IT BE CONSEQUENCES:)) 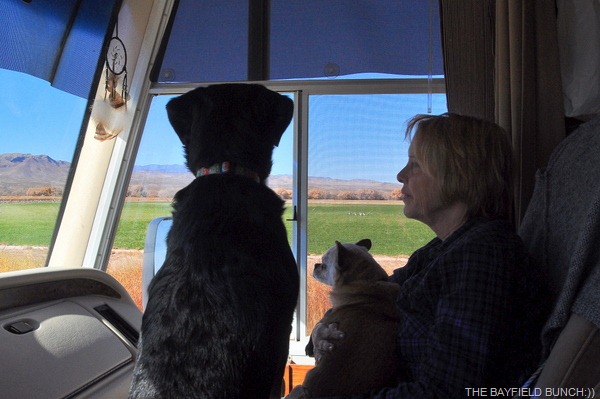 HERE’S THE GUYS CHECKING OUT ALL THE SAND HILL CRANES AT BOSQUE del APACHE NATIONAL WILDLIFE REFUGE TODAY
I don’t know how Pheebs does it but last night she somehow quietly sneaked up onto my narrow bed and without disturbing me snuggled up with her head on my pillow.  She is just the bestest dog:)) 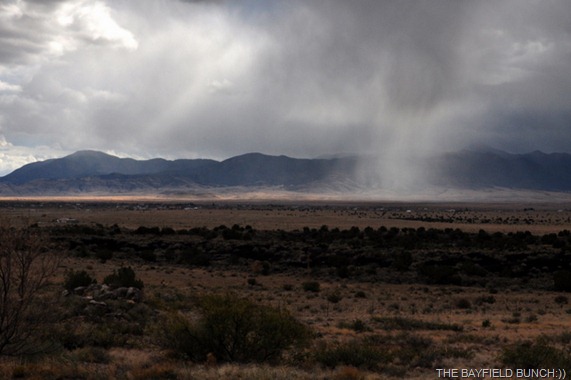 A RAIN CLOUD MOVING ACROSS THE DESERT FLOOR MONDAY
After Monday’s blustery weather it was sure nice to see the sun climb into a clear blue cloudless sky this morning.  Didn’t spend a lot of time on the Shaw Direct satellite system because I didn’t want to start the day off on the wrong foot.  We’ll try again later but we did find out last night that the cable going into one of 4 locations on the LMB was plugged into the wrong port . 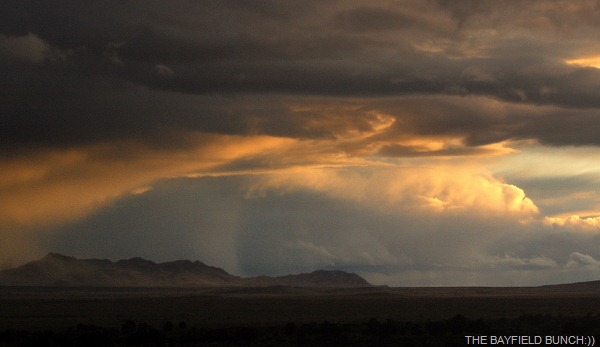 VALLEY OF FIRES RAIN STORM COMING THROUGH
It was time to dump tanks this morning before leaving Valley Of Fires and after last week’s black tank fiasco I must admit I was feeling like a very nervous skydiver sitting at the open door of a plane waiting to jump.  A skydiver might be trying to convince himself to ‘jump, jump, jump.’  I was trying to convince myself to, ‘pull the lever, pull the lever, pull the lever.’  I had checked the hose connection carefully this time, checked it twice and triple checked it about 76 dozen times.  Pulled the gray tank lever first just to get a good burst into the hose to see if it would hold.  It did.  Was wishing I was wearing a Haz-Mat (hazard materials) suit but….here goes,  ‘JUMP!!’  Ka-Whoooooosh, away went the soup into the Rhino soup tube and right on down into the big soup tank in the ground.  A successful mission.  Conclusion…My black tank crash last week resulted from pilot error and not from an equipment failure…….10-4:)) 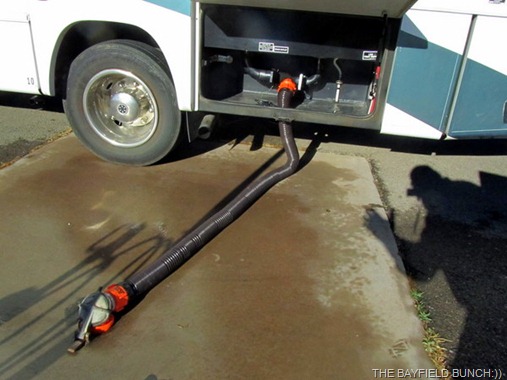 OK, HERE GOES……KA-WHOOOOOOOSH
I managed to get myself a little smarter this time by dumping the tanks before having a shower and not after:))  It was soooo great having a long hot shower in an area larger than a small clothes closet.  Enough room in the shower stall for half a dozen people but I was quite happy to be all myself.  And a nice clean and heated washroom too with enough space for a game of floor hockey…now how nice is that.

BOSQUE del APACHE NATIONAL WILDLIFE REFUGE
And, a few parting thoughts about Valley Of Fires.  Would highly recommend this place.  RV sites are scenic and spacious with water and electricity available on many sites.  Modern washrooms, dump station and a staffed Visitor’s center.  And yes there is a looping turn around road at the south end of the Park but if you have to dump tanks do it on the way in if you can and that will save you having to get your rig turned around to line up with the dump station.  The Lava Flow walk is well worth it.  Take your time, read the reader boards and don’t forget to take a brochure with you to read the numbered viewing sites.  It’s a loop walk so do it from left to right to keep your numbers in sequence.

We rolled out of Valley Of Fires and headed west on highway 380 with just a beautiful looking New Mexico morning going on.  Rolling hills spotted with Juniper trees passed by as we made our way over hill and dale heading for the little town of San Antonio.  It was a great morning as the horses in our Damon Workhorse Motor Home pulled a little extra hard getting us up and over a few grades.  At 10:20 we crossed the Rio Grand and minutes later we were seated in the Owl Bar and Café.  We had read somewhere about the hamburgers served here so we popped in and had us a couple home made burgs.  And, as advertised, they were yummy. 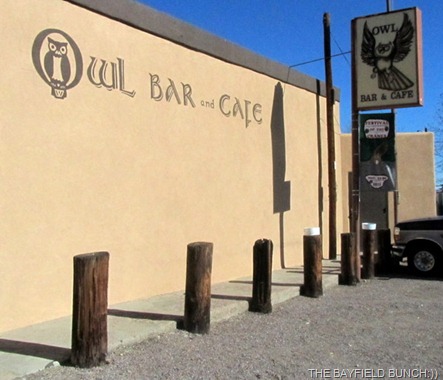 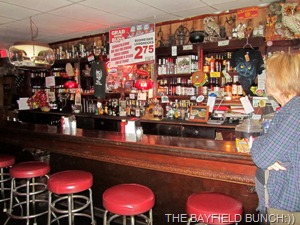 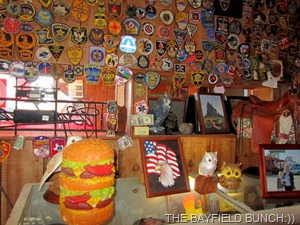 WAITING FOR OUR BURGS AND CAN YOU SPOT THE YELLOW ‘BAYFIELD BUNCH’ CARD PINNED TO THE WALL JUST ABOVE THE STARS IN THE AMERICAN FLAG
San Antonio is one of those dusty little western towns and consists of one intersection and maybe a couple dozen buildings.  We slipped south through the intersection and headed 9 miles on a narrow road to the BOSQUE del APACHE NATIONAL WILDLIFE REFUGE.  Stopped into the visitor center first to make sure a Motor Home our size would be able to do the 12 mile Refuge tour.   Yep said the guy, no problem. 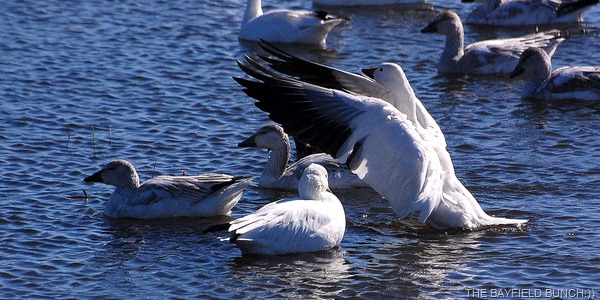 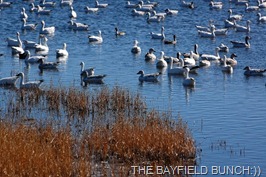 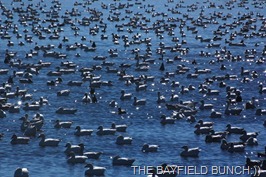 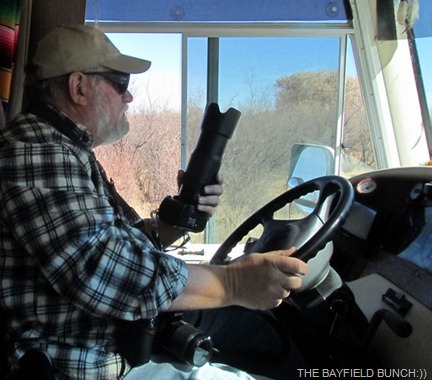 Twenty minutes later Kelly showed her ‘America The Beautiful’ card at the pay booth and saved us $5.  Spent the next hour driving slowly along the dirt roads throughout the Refuge.  There’s quite an extensive irrigation system flowering throughout the Park feeding the many ponds and small lakes.  Forests of Golden Cottonwood trees create a natural habitat for the many forms of bird life we saw.  Sand Hill Cranes were in abundance as were thousands of white Geese.  We even came across a small herd of Javelinas (wild pigs) making their way across a field through a flock of Sand Hill Cranes.  It is these Javelina’s here in the southwest that we fear the most because they can easily kill a dog.  We didn’t have to worry as much last year because Max and Checkers were too old and well beyond chasing Javelinas.  But, fireball Pheebs would be right after them.  Yes, it is a big worry for us. 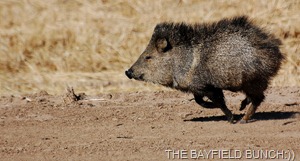 We would definitely recommend the Bosque del Apache to anyone with an interest in wildlife and birds.  This is a big Refuge and I noticed in the Visitor’s Center they had a poster up looking for help.  We noticed well over a dozen RV’s parked close together behind the Visitor’s Center and wondered if maybe they were all volunteer workers. 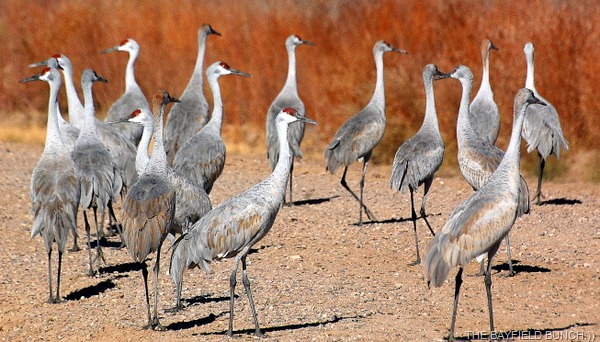 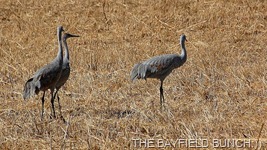 SAND HILL CRANES
From the National Wildlife Refuge we headed back through San Antonio, picked up I-25 heading south and put the hammer down for another familiar place of ours….Truth Or Consequences.

SOUTHBOUND ON I-25 FOR TRUTH OR CONSEQUENCES
We did an overnighter here last year on our way to the ranch and in March of 08 we spent nearly a week here.  First stop was Wal-Mart for groceries and then it was off to the quiet little Elephant Butt Recreation Damn Site.  This is a quiet out of the way little place right on the banks of the Rio Grande River.  Tucked away in a tiny valley below the damn it has maybe a dozen or more Casitas to park beside.  An old fish hatchery sits at the end of the road and there are many birds in the trees along the river.  Just another one of those quiet little spots the Bayfield Bunch loves so much.

We have 4 antennae TV channels and we do have a spotty Verizon connection.  This blog may publish or it may not.  Right now we are keeping a very close eye on the weather because it looks like some major rain may be headed our way over the next couple days.  We may roll right on out of here or we may hang in for a day or two. 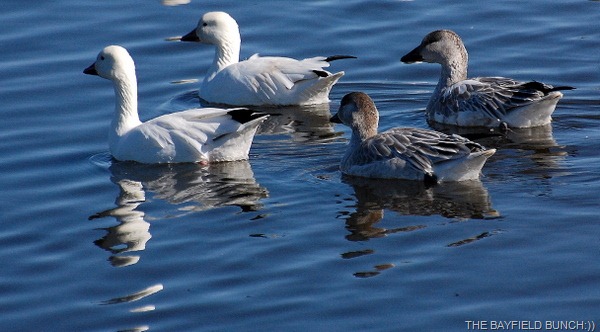 RV LIFESTYLE AS FULL TIMERS have joined the ‘Bunch’ as our latest Blog Followers. Welcome, and nice to have you along folks. 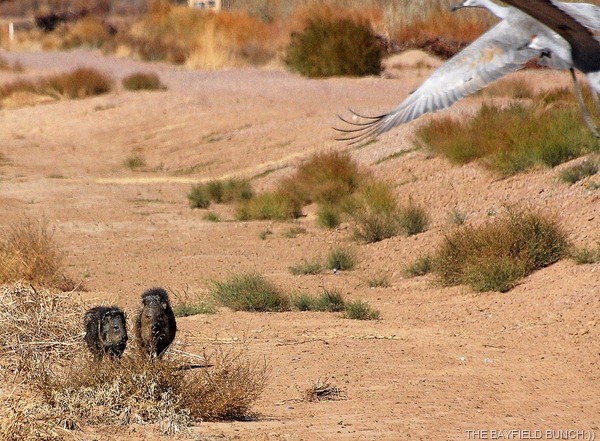