DESERT SUNRISE AND A RELAXING DAY AT HOME

Brace yourselves folks….this kind of Sonoran Desert scenery just gets me kinda photo crazy:))  How beautiful it was this morning at first light to open our side door to a world of sweeping enchantment.  The sun, just below earth’s horizon, cast an orange glow into the awakening morning sky behind a nearby silhouetted small mountain range to our southeast.  Between those mountains and where we stood were thousands of uninterrupted acres stretching wide across the Sonoran Desert.  Tall Saguaro Cacti marched silently in scattered ranks from horizon to horizon.  Only sound in the dead still air were distant Cactus Wrens waking to a new dawn.  I felt the Bayfield Bunch were truly back in their element and I was so happy just to be here and be a part of another truly beautiful desert sunrise.

We weren’t long in getting ourselves out for a walk in our new surroundings.  Despite the rocky footing little Cora did good but was much happier when we reached and followed a damp but sandy creek bed.  They call them ‘washes’ in these part and they carry small raging rivers in Monsoon season.  Just so nice to continuously see new things on our walks these mornings now. 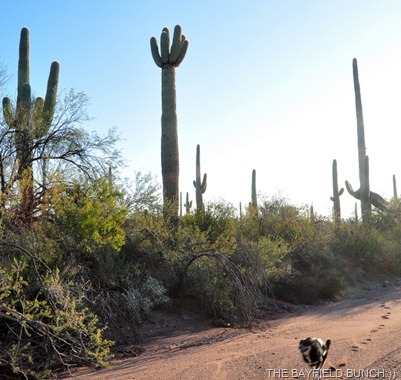 Back at the rig it turned into a pleasantly busy morning.  The fire pit needed cleaning so out came my shovel.  Tables, chairs, and BBQ out as well along with our woven ground mat.  Transmission and oil to be checked in the Motor Home and we put our awning out for the first time in nearly 2 years.  Up on the roof to get the solar panels up.  Haven’t been up since we left Borrego Springs last winter. 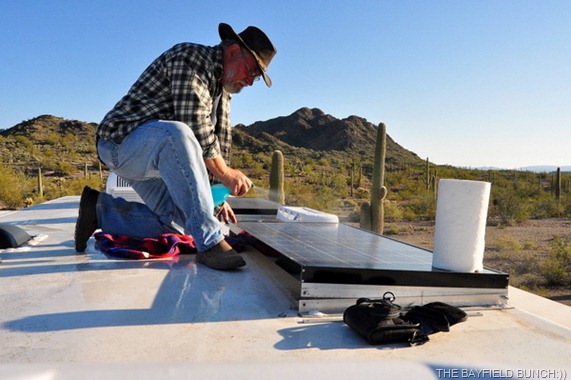 CLEANING THE SOLAR PANELS BEFORE PUTTING THEM UP

Assembled my flag pole and up it went too.  Out came the iPod and Bose.  Soon I had the harmonious and melodious sounds of some very favorite music weaving it’s way through the Ocotillo and Palo Verde trees out across the desert floor.   The ‘Sons Of The Pioneers’ had gathered around once again to remind me why it is I love the southwest so much:)) 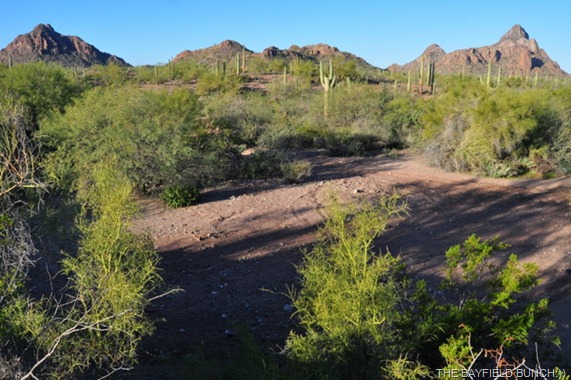 A GOOD EXAMPLE OF THE GREEN SONORAN DESERT IN OUR BACKYARD

We tried setting up our Shaw Direct satellite dish again but I’m not even going to go there!! 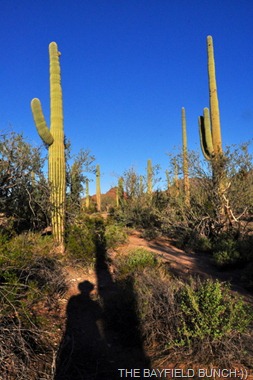 Late morning, Pheebs and I headed off to climb a tall rock formation nearby and get us a lay of the land.  We carefully picked our way around a lot of prickly Mesquite shrubs and very nasty but very beautiful Teddy Bear Cholla cactus.  Pheebs did great in keeping herself clear of that stuff.  If you ever brush up against or slightly touch one of these prickly monsters you are immediately launched into a big world of pain.  I tangled with one nearly 4 years ago here and had to work the barbs out with a pliers.  I can still visualize that painful procedure to this very day. 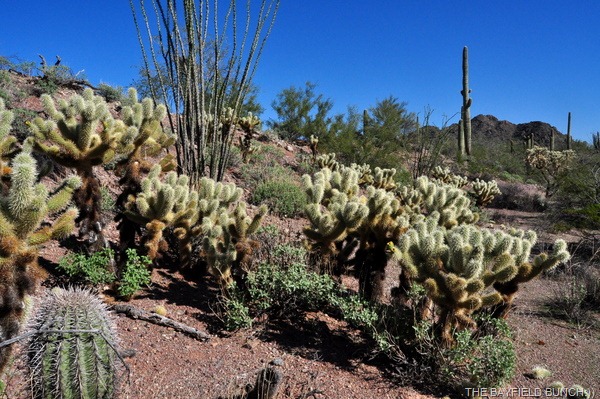 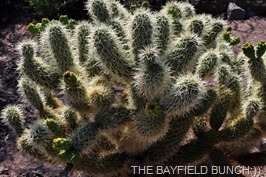 How nice to be hiking in and around giant Saguraro and Organ Pipe cactus as Pheebs the Dusty Desert Dog and I scrambled our way up the rocky terrain looking for a and easy route to the top of those high round rock croppings. Turns out there were 3 of them and we were able to get ourselves up on top of the center one which was the second highest. 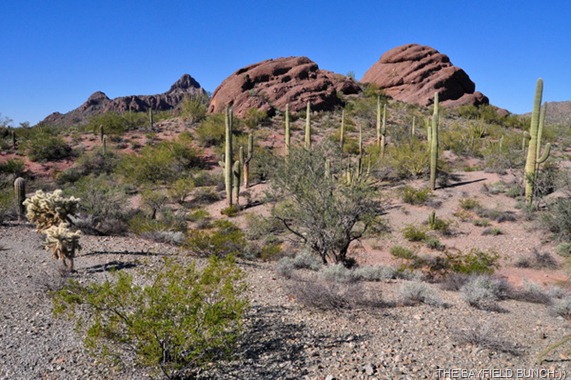 Great views for miles and miles and miles.  What a great vast land this is and how fortunate some of us are to be out here not only seeing it but partaking in it as well. 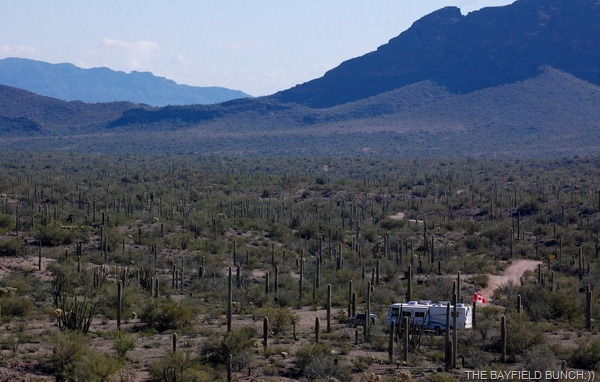 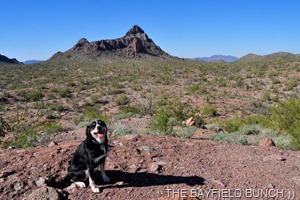 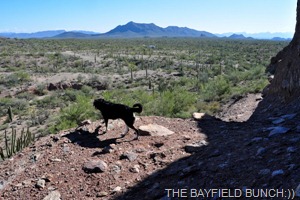 We had a relaxing afternoon stretched out in our chairs soaking up some Arizona sunshine.  Kelly caught up on some reading and I just stretched out listening to my great Cowboy music. 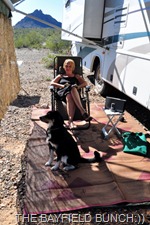 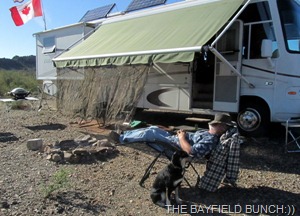 I was particularly moved by a post I read this morning that deals with dreams, the loss of a friend and living.  This single lady has a nice easy flowing and sincere writing style.  She is also an animal care giver and loves her dogs.  Meet JOOL. 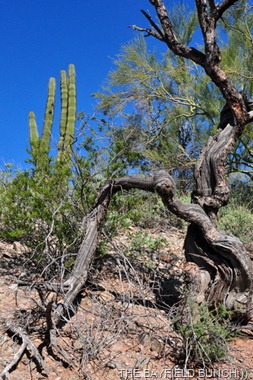 Ever get your Tuscon mixed up with your Tucson.  Happens to me occasionally and Phil from Phoenix pointed out that error this morning in one of my post’s label section a few days ago.  Thanks Phil and I will try hard not to get my Phoenix mixed up with my Fill again:)) 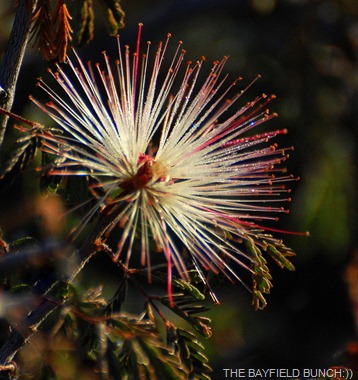 Turns out my assumption last week that commenter Butterbean was a her…..was wrong. Butterbean wrote back to say he was a him and it was him who invited us to him and her’s Texas Ranch. See, I sometimes get my hers and hymns mixed up to:((

Can’t remember the last time we ate outside but tonight was the first time since whenever last time was.  Steaks on the BBQ and a campfire. 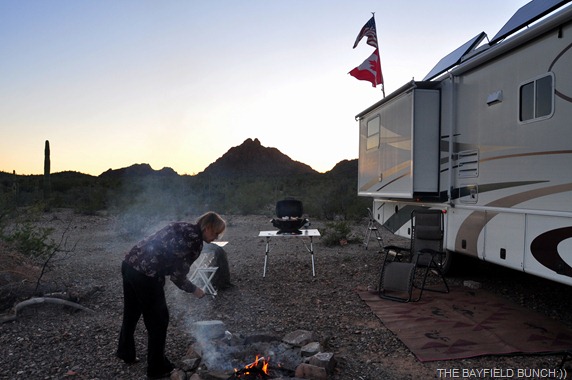 We sat around the campfire with a setting sun slipping behind the mountains to our west.  First bright objects out in the dimming night sky were the Planets Jupiter to the southeast and Venus in the west.  We sat in awe under the darkening skies as a canopy of jewel like stars emerged against the black velvety background of night.  Shimmering little points of light from horizon to horizon seemed to mirror the embers in our dying campfire.  We concluded this was our first campfire since last March in Lone Pine California and this morning’s sunrise was our first Sonoran desert sunrise in over three and a half years since last being here on Darby Wells Road way back in February of 2008. 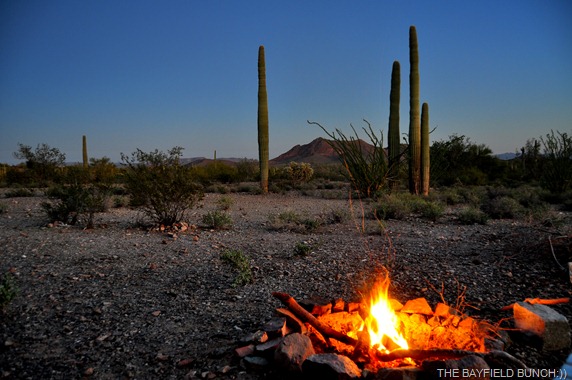 In the morning we will slip into Ajo to do laundry, wash the Jeep and hopefully find a power cord for our Cradlepoint Router which will help boost our poor, unpredictable and patchy Verizon signal.  Maybe I can even catch up on a blog or two:)) 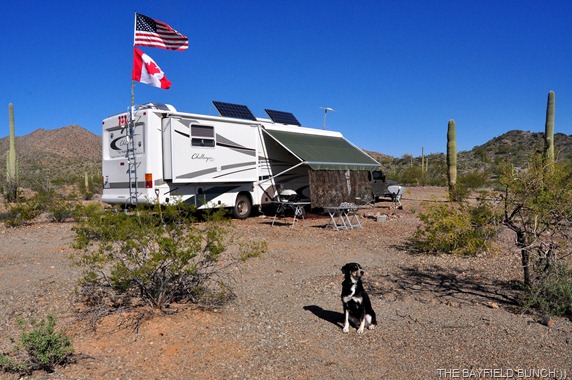 WE ARE TRULY BACK IN OUR FULL BOON DOCKING MODE AGAIN:))