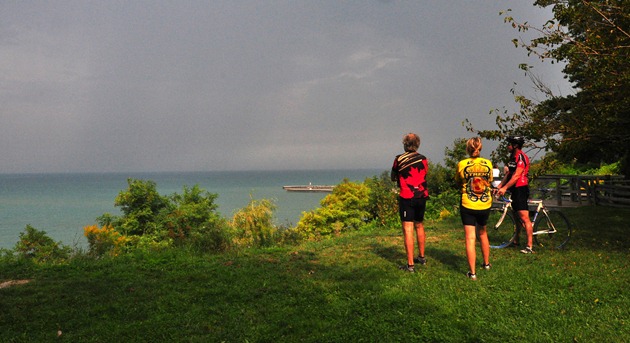 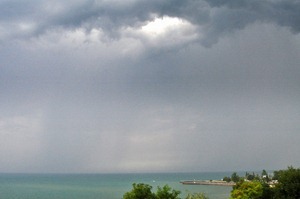 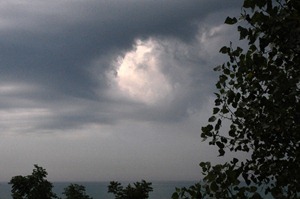 PEOPLE GATHER TO WATCH AN INCOMING STORM THIS AFTERNOON
With the sound of rumbling thunder out over the lake again I quickly checked the computer’s weather map and saw a storm cell coming in.  Camera's into the Jeep and off to the the cliffs overlooking Bayfield's Beach.  Some great lightning bolts out over the darkening waters of Lake Huron.  Saw half a dozen boats all with the high bow waves racing for the safety of Bayfield Harbour.  Didn't seem to be any wind associated with the storm though and soon the threatening dark clouds turned a pale gray it began to rain.  Cameras back into the Jeep and I headed home.  Kelly had gone to Goderich so this marked the first time Pheebe had been home alone for over half an hour.  Happy to report the house was still intact when I returned:)) 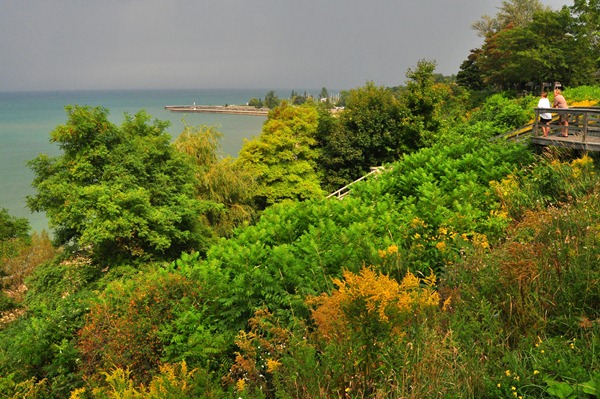 YES, THERE WAS A STRANGE YELLOW COLOUR IN THE AIR
Heard later on our 6 o’clock news that this storm which skipped over us caused a lot of damage about 60 miles inland with downed trees, ripped roofs etc.  Environment Canada will investigate once again to see if a tornado actually touched down anywhere.  We still have high humidity levels which are due to be blown out of here overnight with temps once again coming back down around the high 60’s mark.  Now, that is civilized. 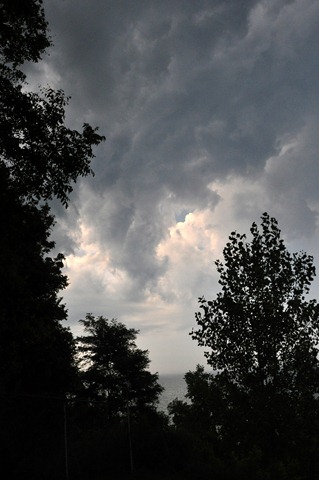 I ventured back into Blog Land for a few minutes this morning and noticed GYPSY has happily found what I think just might be the answer at last to her unsettled living arrangement.  In her own words, "Homeless no more!"   In my opinion, the fact she has found a 55+ community is going to be a huge asset for her.  Her post got me to thinking about the 55+ community we have been living in for nearly 9 years now.  Of all the Parks we looked at in our area years ago there was only one that interested us and stood head and shoulders above all the rest because of it's uniqueness, one of them being…….. an Adult Park.
Of course I am talking about the 5 Seasons Estates just a couple miles northeast of downtown Bayfield, Ontario.
Now, what I'm going to say here may ruffle the usual feathers but I'm sure the majority of folks will know exactly what I am talking about.  Probably one of the greatest things we have going for us in our Park is the fact it is 55+.  That is hugely significant because it means we do not have noisy kids running around or teenagers up and down the streets with their cars.  We have zero crime problems here and again I see that as a direct result of the Park's mature residents.  No noisy drunken parties, no neighbourhood egos, no loud music and no attitudes, (ok, maybe a few)   You could shoot a canon down any one of our quiet tree lined streets at any time of day or night and not hit anyone.  We can bicycle here without the threat of being mowed down and anyone can walk at any time of the night with absolutely no threat to their well being.  I attribute all those positive things to simply not letting younger people and families in here.  That may not sit well with some folks…………. but facts are facts!! 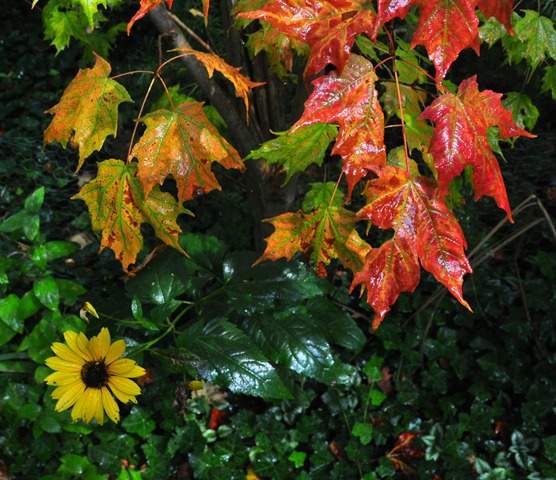 AFTER THE STORM
With all the crap and garbage going on in our society today it is like we live in a 1950's time warp in our little 60 or so unit Park.  Four of our closest neighbours are single Seniors with the other 3 being Senior couples and actually, we rarely see each other.  Our treed lots are huge compared to any other Park like this that we have ever seen.  In fact, our lot is probably bigger than most homes found in many suburbs.  And, because of the way I have planted trees and shrubs on our lot we basically cannot even see the neighbour's or their houses. 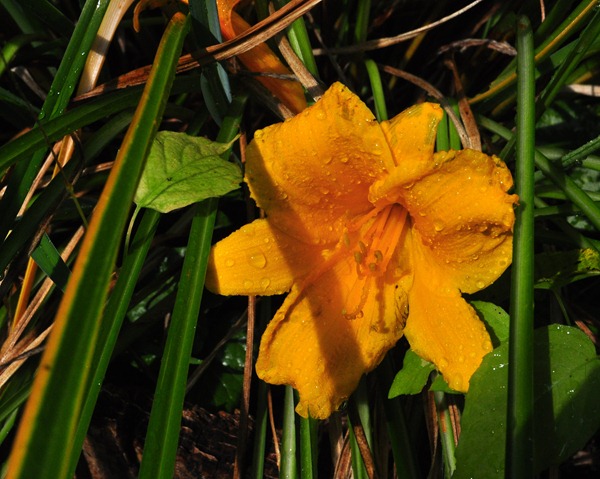 We do have a Clubhouse in our Park but it is not an active one and I see that as a good thing because it is just down the street from us and who would want all that extra noise anyway.  There is another Mobile Home Park located a few miles south of us across the Bayfield River.  Fortunately we have some heavily forested land between us because sometimes on a long weekend Saturday night if I'm out walking I can hear the faint whoopin and thumpin of their live outside band.  We are so fortunate that we do not have any of that kind of stuff going on here.
I've learned a few things over the years and one of them is this, 'if you are in the mood for party noise then go to where the party noise is and be a part of that noise all you want but when it's time to go home, I want to come home to where the quiet is.  We can do that here at the 5 Seasons.  Am I old fashioned?  Nope, if I have to be around people I much prefer to be around mature people.  I lost too many good years being around the other types of people decades ago. 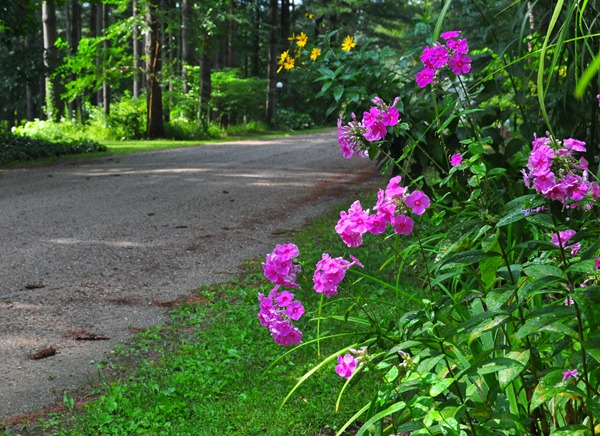 THE QUIET STREET IN FRONT OF OUR HOUSE
Our Park is located in the country and surrounded on 3 sides by forest with the 4th side being farmland.  We have miles of walking trails here where it is possible to walk quiet paths with rarely encountering another person.  Now, how nice is that:))  Our streets are all tree lined with each lot also having it's own canopy of trees.  We basically live in a Pine forest.  Mail is picked up in a mail box hut near the main entrance.  And no, we do not have one of those annoyingly silly wooden arm gates at our entrance either.   Garbage and recycling are picked up Monday mornings.  We can have campfires in the privacy of our backyard whenever we want as well.  We also have our Motor Home parked right on our lot with room to spare, and again, how nice is that. 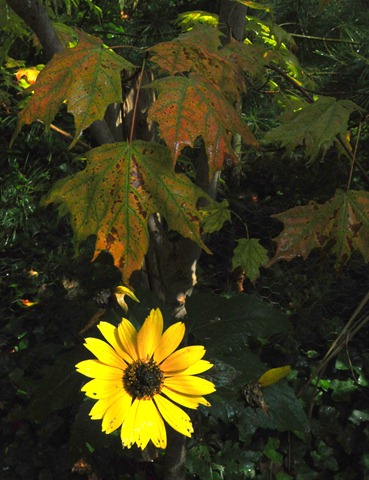 Several years ago the house across the street and down from us a tad was occupied by a single lady who's health finally forced her to sell.  A young 55+ couple from London Ontario bought it because they loved this beautiful forested Park so much.  In less than 2 years they couldn't stand it here any longer and were gone.  Tooooooo quiet!!  I think he liked it here and would have stayed but she couldn't handle being away from the shopping malls, big box stores, trendy Shoppe's and boutique craft places, fancy restaurants and all her friends.  The very things that we love so much and drew us to this Park were the very same things that finally drove that couple out of the Park.  They were accustomed to the bright lights social life and had to get back to the city. 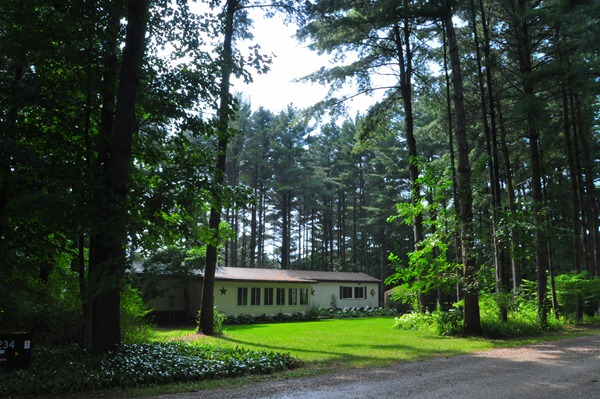 THE LONDON COUPLE COULDN’T HANDLE ALL THE PEACE AND QUIET WHEN THEY LIVED HERE IN THIS HOUSE
Now, I can see a few folks right now with a question on their minds that might go something like this....'if your Park is such a great place, why is it you talk about wanting to leave there and live in the country??  Good question by the way and I will try to keep my answer as short as I can, if that's possible.  When Kelly and I met we were both living in big cities.  She was in Cambridge and I was in Stratford.  Kelly's life as well as mine before that had been spent mainly in large towns and cities.  Always in communities and always around people.  Had Kelly and I not mutually decided we had had enough of that way of life we would never have found our way to the old abandoned farm house near Fullarton Ontario that we made liveable and stayed for 7 years.   It was that 7 years of country living that changed everything for both of us.  Not just me, but Kelly as well!!  It spoiled us both, but spoiled us in a good way.  We will probably never live in a town or city again unless we are carried there on stretchers.
Had we come right here to the 5 Seasons Estates Park without spending those years on the old farm I would probably not be as restless as I am now.  It is because we have lived in the country that we understand the difference between community living and rural living.  It is why we both would love to return to country living some day. 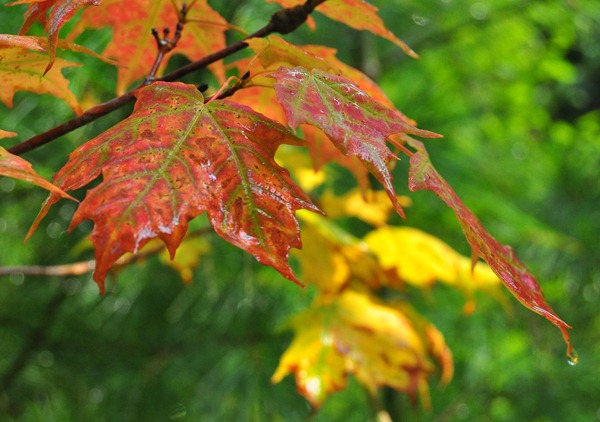 THE LAST PARAGRAPH:))  Ed left a comment on my post last night that hit the nail square on the head for me.  In part he said, " remember how much you liked the old farm property that you lived on prior to your move into Bayfield. You need a new challenge, another small piece of ground (3-4 acres) would be perfect for you to create another 'jungle' for your summers."  Ed is right and that is the bottom line for me which I have blogged about many times before.  Yes, we have a really nice place here but the challenge has gone out of it for me.  Yes, there is still maintenance and puttering and I'm sure a lot of folks would love to be doing just that but I have always needed a bigger challenge and am always at my personal best when I have my teeth into a new project.  Not puttering!!  Oh how I envy JB in Alberta and MIKE in Montana with their ways of life.
The best days I had this past winter were the days we spent at the Lazy W Ranch near Elfrida.  I was busy, I had my teeth into something and by the time we left that property, it was looking a whole lot better than when we had arrived there.  With the slight possibility that we had a chance at buying that place, my head was ablaze with ideas. Unused muscles were once again back at work as I spent hours clearing brush, etc.  I had even figured out where the new Coyote proof fencing was going to be.  Even had a spot figured out where visiting RV'ers could park their rigs.  (yes, you read that right:)) My mind and body were alive again both mentally and physically.   And, how nice is that.  What a great time I had for a short while working on another dream.  It's just the kind of guy I am.  With my original dream of full timing slipping further and further away each year and age creeping up on me, I need a new challenge, a new interest, a new project.  A new dream............. 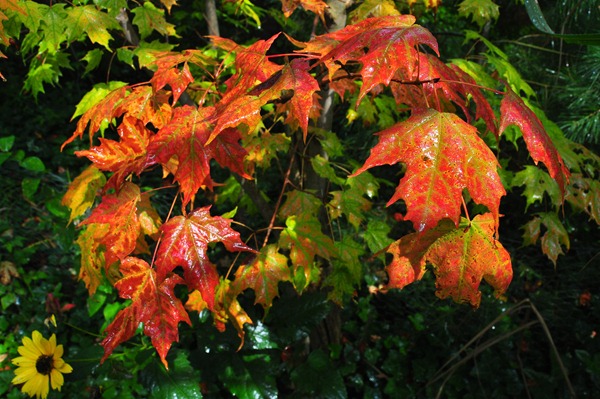 
The only thing better than right now will someday be the memories of right now...AL.
Posted by Al Bossence at 9/03/2011