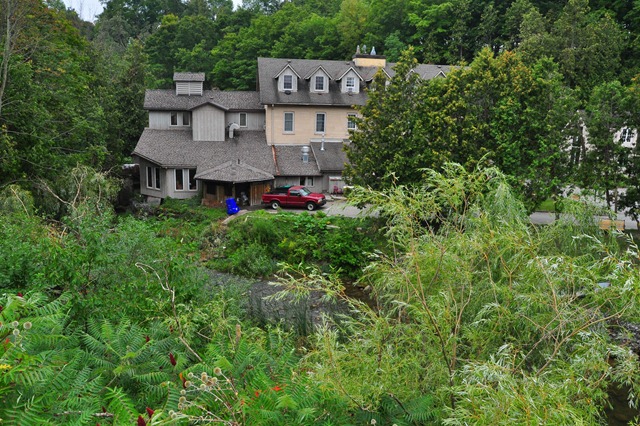 RUMOURS AFTER THE TORNADO SAID THE BEN MILLER INN HAD BEEN DESTROYED, BUT AS YOU CAN SEE….IT HAS NOT!!

One of our commenters Wednesday suggested I try Benadryl for my sleeping problem and that kind of rang a bell with me.  I had recently moved some things from our medicine cabinet in the house to the Motor Home and one of those things was a package of Benadryl.  Tried one of those last night and it worked.  Well, it worked until I was jolted out my sleep by a nasty thunder, lightning and rain storm roaring through.  Luckily the Benadryl sent me right back to Lala Land and kept me there until 6:30 this morning.   Big change in my mental & physical well being today simply by having myself a better night's sleep.  I have always tried to stay away from pills of any kind & especially sleeping type pills but maybe in the long run I am doing myself more harm than good. 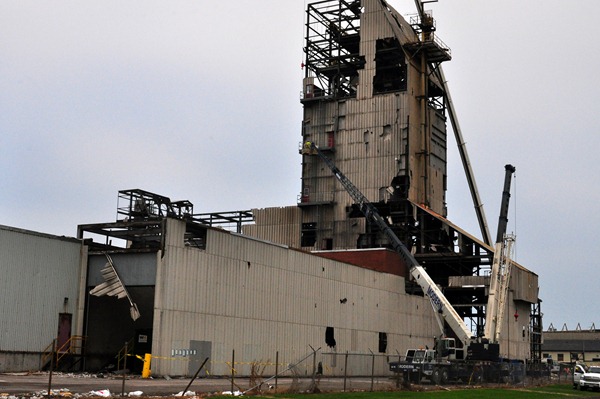 TWO OF THREE CAR WASHES IN GODERICH WERE TOTALLY DESTROYED
Kelly was home this morning so I took the opportunity to throw my cameras in the Jeep & head on up to Goderich for another look around an area of Goderich that I had missed before.  After the tornado had ravaged downtown Goderich it headed east and began tearing up houses just a few blocks away.  It is an older housing section of Goderich and it took a pretty good mauling.  There are people there who will not be going back to their homes again. 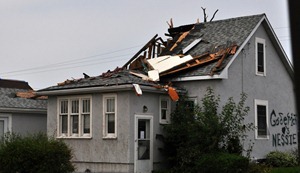 Following the Tornado there were many stories going around about places being totally destroyed but many of those stories were just that....stories.  We had heard the exclusive & ritzy BEN MILLER INN had been destroyed about 10 miles east of Goderich so I headed over that way to have a look for myself.  The Ben Miller area was hit hard with many trees down but the Ben Miller Inn itself is basically fine and open for family dining.  Some of the other buildings like cottages, guest house’s and Spa on the property have sustained damage but work crews are busy getting things cleaned up, rebuilt and restored.  From what I could see, the main damage was to the surrounding forest & landscaping around the Inn itself. 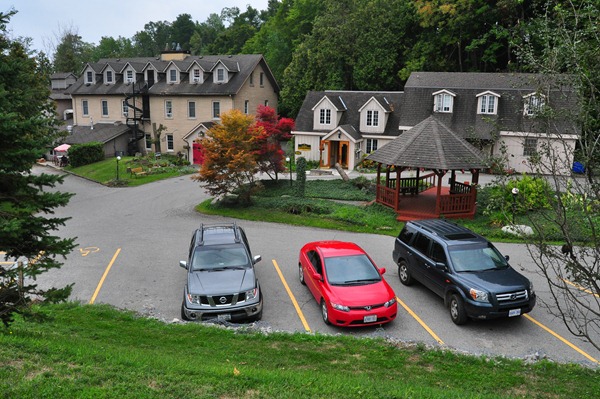 THE OLD RECLUSIVE AND HIDEAWAY BEN MILLER INN HAS SEEN MANY POLITICIANS COME AND GO AS WELL AS A FEW MOVIE STARS ALONG THE WAY
When I returned home I had enough energy left over to clean the interior of the Jeep, etc & if it hadn't been so humid I would have taken the Pheebs for a spin around the trail.  Hopefully we are on the final countdown of humid days this summer. 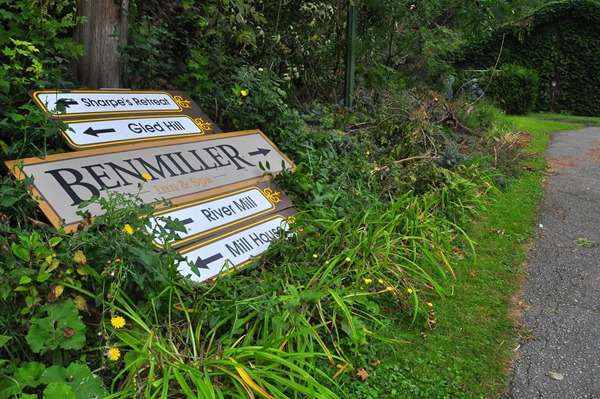 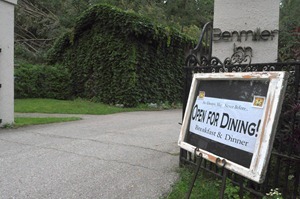 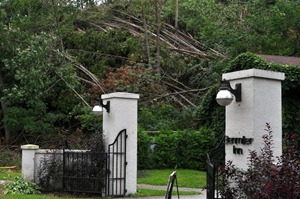 So nice to get out into the countryside again this morning.  If only we could figure out a way to stay in the countryside permanently.  There is nothing that excites or interests me more than, when on my back road photo tours, I come across a country property with a 'For Sale' on it.  Now that we have pretty much given up any idea of buying anything south of the border, moving to British Columbia or Full Timing, our interests have been re-focused on our own area again.  Came across a place about 3 weeks ago near the little town of Holmesville that set my imagination on fire.  Took some photos & brought Kelly back to see it the following day.  Unfortunately the house was too far gone to be saved and although there was no For Sale sign on the property we didn't pursue the idea any further. 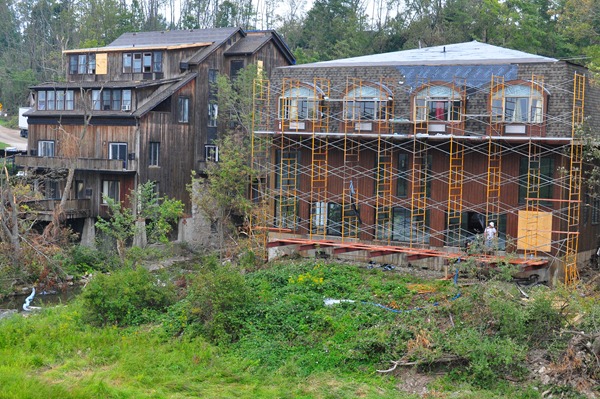 REPAIRS ARE QUICKLY BEING MADE TO SOME OF THE BUILDINGS ON THE BEN MILLER INN PROPERTY
A week ago Monday I came across another back country road house & property with a For Sale sign north of Goderich and got myself excited all over again.  Of course one phone call to the Real Estate company shot that one down too.  Maybe the housing market is down in some areas of the country but certainly not in our area.  Prices of rural properties are huge to say the least.  However, we will continue to keep our eyes open and ears to the ground for that special little 3 or 4 acre piece of quiet country living we both would so much like to find:)) 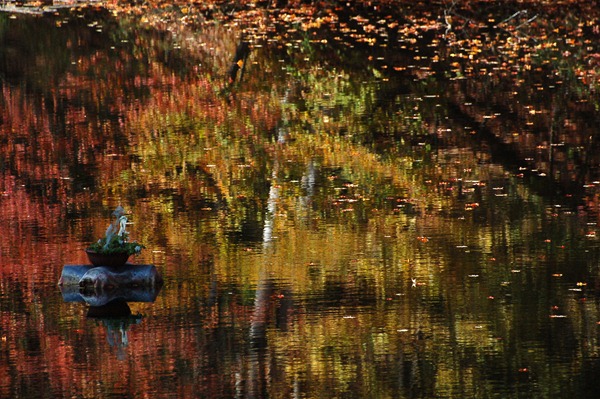 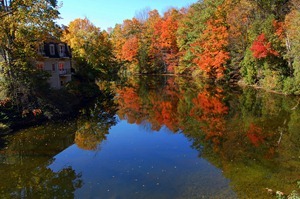 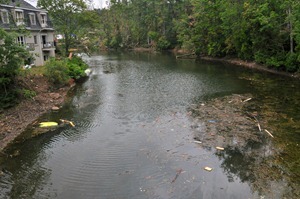 TOOK TWO OF THESE AUTUMN PHOTOS LAST OCTOBER AND THE THIRD ONE FROM THE SAME LOCATION THIS MORNING ON THE BEN MILL INN GROUNDS….I DID NOT SEE ANY SIGN OF THAT ORNAMENT IN THE WATER BUT DID SEE TWO WORKERS IN A BOAT NEAR THERE PROBING FOR SOMETHING IN THE WATER

A comment on Wednesday night's blog by reader Scott sure reminded me of myself in our early RVing, computing & blogging days years ago.  Scott, in part says, "Al, its funny how things work, your growing tired of blogging however you have inspired me to begin. I am 51 and have never had much use for computers much less reading , but once I started my thirst for more is thru the roof."  Oh how I remember those early exciting days Scott and good for you in picking up and sticking with your blogging interest.  If my posts inspired you or others then it makes it all worth while and gives me a sense of well being:))

THE TORNADO JUST MISSED THIS RAILWAY YARD WITH IT’S LOCOMOTIVES, GRAIN CARS AND OLD STATION IN THE BACKGROUND…..THE TORNADO’S PATH TORE THROUGH  ABOUT A HUNDRED YARDS TO THE LEFT OF THIS PHOTO

I hope to put another Picasa photo album together Friday with a few more pictures of what the tornado did to some of the homes. 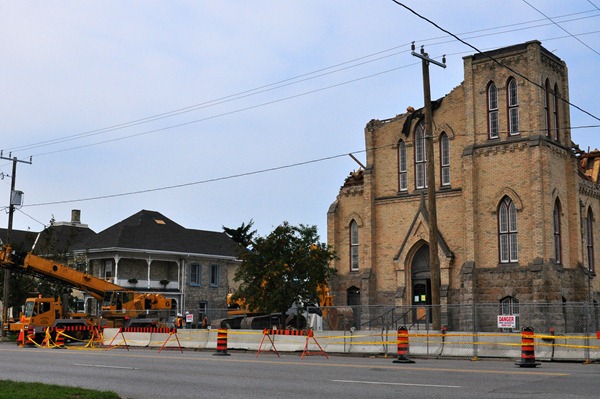 GROANER'S CORNER:))  St. Peter and Satan were having an argument one day about baseball. Satan proposed a game to be played on neutral grounds between a select team from the heavenly host and his own hand-picked fiery boys.
"Very well," said the gatekeeper of Heaven. "But I hope you realize, that we've got all the good players and the best coaches."
"I know, and that's all right," Satan answered unperturbed. "We've got all the umpires."

Tourists see the world, travelers experience it.
Until one has loved an Animal, their soul remains un-awakened.
OUR BLOGGER WEBSITE http://thebayfieldbunch.com/
OUR PICASA PHOTO ALBUMS http://picasaweb.google.com/stargeezerguy