Turned out to be another hot & humid cooker of a day.  Half an hour this morning with my grass trimmer & another half our trimming & tying up shrubs & that was it for me.  Strapped myself into my recliner, cranked up the A/C, clicked our 3 blade fan into high gear & hung on to the arms of my chair for the rest of the day.

Tonight's photos are a bit of a walk down memory lane for me.  Boot Camp 1965.  In the top photo of all the guys you can find me just left of center & down a bit & kneeling.  I put a dot on my helmet & one on the guy to my right.  His name is 'Oily' & I will tell you about him a little further on:)) 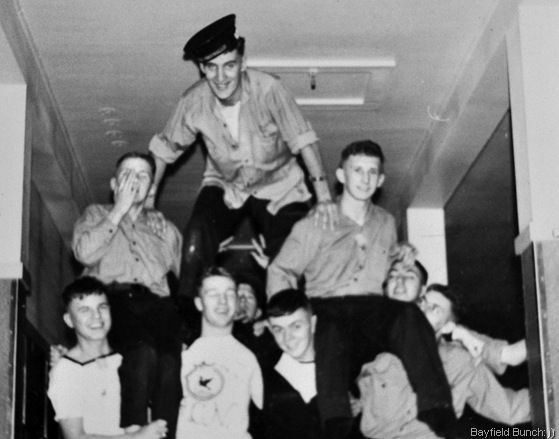 THAT'S ME ON THE TOP....OUT OF THE 8 GUYS IN THIS PIC I CAN REMEMBER 6 OF THEIR NAMES...JOHNSON, SCOTTY, McFADDEN, WONG, MIDDLETON, CURRY

Seems I sure did shorten up the summer in my post Sunday night.  Instead of typing in the 'beginning' of August I typed in the 'end' of August.  Amazing how time fly flies when your anxiously awaiting an RV departure date.  I have since corrected the typing error.  Also in yesterday's post I mentioned about reading blogs for 3 or 4 hours each day.  I should have mentioned I also spend a good chunk of that time writing my own blog going back & forth copying links, etc.

We are in an active search now for our next & newest best member of the Bayfield Bunch.  My post a few weeks ago entitled, OH HOW I MISS THE BEST PALS I HAVEN'T MET YET opened the door for us to begin talking about & then begin doing something about finding another best Pal.  That was back on July 18th & Kelly has found a number of area sites on the internet from pet rescue places to private owners. 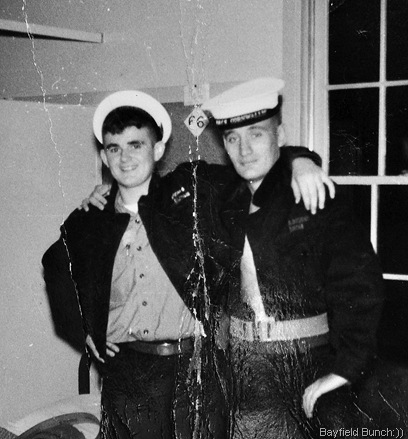 ME & MY BEST BUDDY, 'PORKY BOYLE'.... I HEARD THAT PORKY DIED IN A HOUSE FIRE UP IN ELLIOT LAKE ONTARIO MANY YEARS AGO.....

It is important  to find a dog that will be compatible with the Motormouse so that basically rules out a rambunctious young poopy puppy.  We are thinking at least 1 to 4 years old, not too big & not too small.  Preferably a rescue dog that we can make a loving home for.  A Pal in need of some TLC. 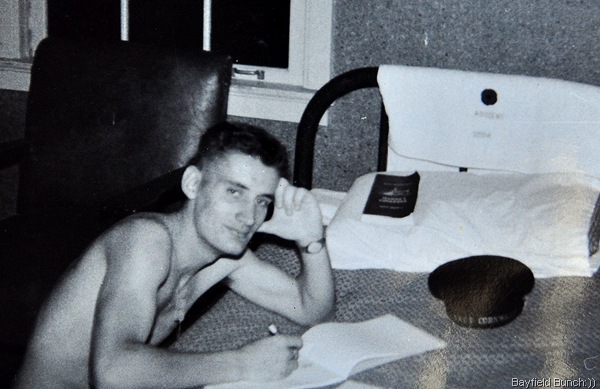 Each day Kelly checks the area sites & we look at the photos & read the dog histories.  I find it difficult looking at the dog photos because I feel so sorry for each & every one & want to bring them all home & make them feel wanted & loved.  I think there has always been something within me that connects with the feelings of all those poor homeless animals.  We saw a 4 year old black & white border collie that caught our eye last week but found out this morning through an email that a home was found for her on Sunday.  We called about a year & half old Lab but the call hasn't been returned so the Lab is probably gone.  Kelly kind of fancies an Australian Sheepdog.  I will just love whoever we find:))  Our search continues:)) 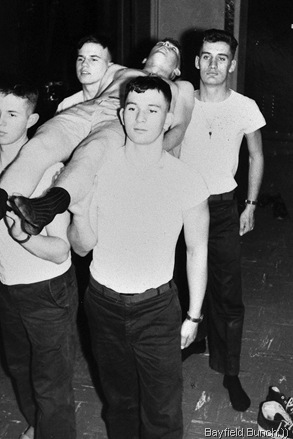 I bought my first camera nearly 46 years ago & I think it might have been a Hanimex.  I do know it was a 35mm & I know exactly where I was when I bought it.  It was the fall of 1965 & I was in Naval boot camp at H.M.C.S. Cornwallis near Digby, Nova Scotia.  I bought my camera at a commercial store on the base.  No idea what it cost but I do know the cheapest film I could buy on the base at the time was black & white.  I can't remember what possessed me to buy the camera because I don't have any recollection of a photography interest any time before that.

When I now look at my photo album from those days I see a lot of young familiar faces that once made up our Fraser 65 Division. We were 63 energetic guys with a lot of kibitzing & shenanigans up our sleeves.  I turned 21 while in Boot Camp & was the third oldest guy in the Division.  We were a lot of friends & best buddies for those 4 months we all trained hard together. 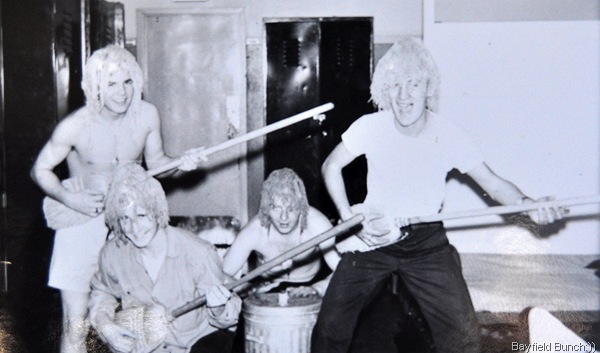 OUR TAKE ON THE 'BEATLES' WITH ME ON THE RIGHT...AND WHERE DID WE GET OUR MOP TOPS?   WELL, THEY ARE REAL MOPS PROPPED UP ON OUR HEADS FROM BEHIND

I was everywhere with that camera taking photos of all the guys & our every day barracks life.  One night about midnight I was startled awake by one of the guys telling me to grab my camera because they were 'going to get Oily!!'   Oily was the name given to one of the guys from Vancouver who would never take a shower.  Nice enough fella & all that but for some reason he wouldn't pile into the showers every morning like the rest of us.  So, one night about half a dozen guys got together, grabbed Oily out of his bed & dragged him kicking across the darkened barracks floor round the corner & into the showers.  And, that's where I came in with my camera.

Below is the one photo I took that I felt was kind of acceptable to put into the post tonight.  Yes, you will see some buns but that is about it.  You will notice the fella on the right holding a brush.  That is what we called a 'Pusser Brush' & was used for general cleaning purposes.  Three of the guys had these brushes & when they soaped up Oily those guys went to work on him with the Pusser brushes.  There was a lot of hooting, hollering & howling mixed with a bunch of commotion in the shower but the 'barracks watch guy' that night was in on it so no alarm was raised.  The outcome of 'Oily's Midnight Scrub' was that he became the first fella to hit the water every morning thereafter:))  I often wonder whatever became of old Oily.  Last I heard of him about 44 years ago he was a Stoker on one our East Coast Destroyers. 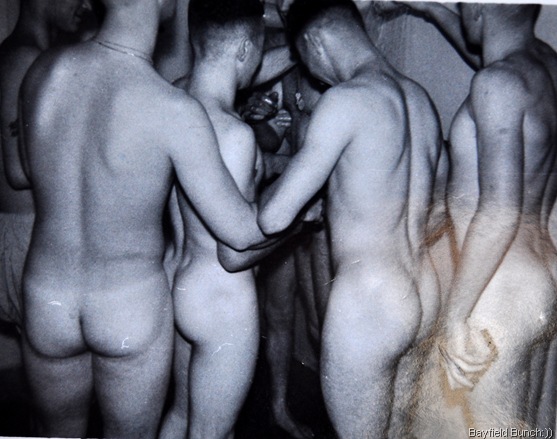 SCRUBBING UP OILY IN THE SHOWER

When we all finished basic training just before Christmas, our tight knit Fraser 65 division split up with the guys scattering all across Canada to various bases & further training courses.  We all said our good-byes on the last day in camp & the only guy I ever saw again was Porky Boyle.  Two days after leaving boot camp I was in Miami Beach on my first official leave.  But, that's another whole story:)) 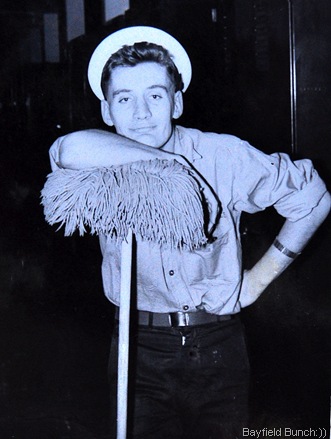 GROANER'S CORNER:((   A guy was telling about this girl Sue who disguised herself as a man and joined the Navy. "But, wait a minute," said his friend, "She'll have to dress with the boys and shower with them, too, won't she?"  "Sure," replied the guy.  "Well, won't they find out?"  The guy shrugged. "Who's gonna tell?"