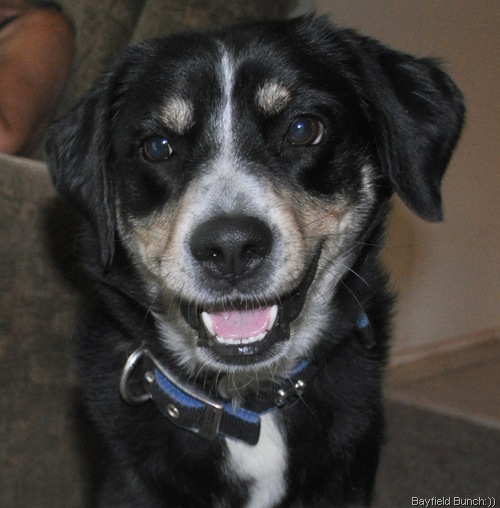 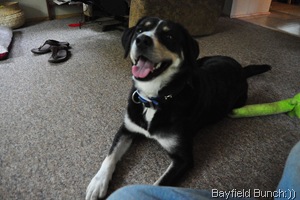 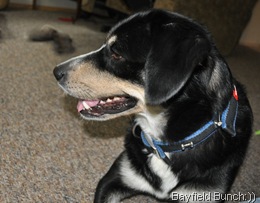 MY NAME IS EVE &amp; I AM NOW THE NEWEST MEMBER OF THE BAYFIELD BUNCH:))
Well, this has been a very busy, exciting & eventful day, but let me just back up for a minute.  After receiving the email Monday afternoon about Lexi I just didn't feel like putting together a whole blog Monday night.  It was time to just break with routine for a change & watch some mindless night time television.  But, one thing was crystal clear by the time we went to bed last night.  We both agreed that 'we will find our own dog next time!!'  And, that is just what we did today. 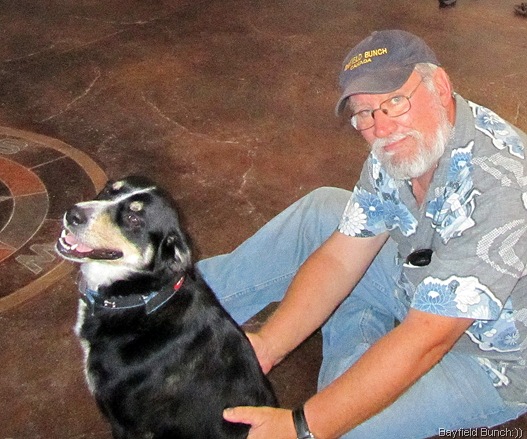 AT EVE'S HOUSE THIS AFTERNOON
For the past few weeks we had been looking on Kijiji, animal rescue, the S.P.C.A. and local dog pound sites.  Some friends emailed us who knew of some dogs but it was a phone call a few days ago that would eventually turn the tide.
Even while waiting for the decision on Lexi we had a few other irons in the fire and one of those irons was our Vet in Zurich, Ontario.  He had called us with a phone number to call regarding a dog needing a good home.  Kelly called that number first thing this morning to gather some info.  Sounded promising.  But, we also had another lead on a dog near the town of Mitchell. 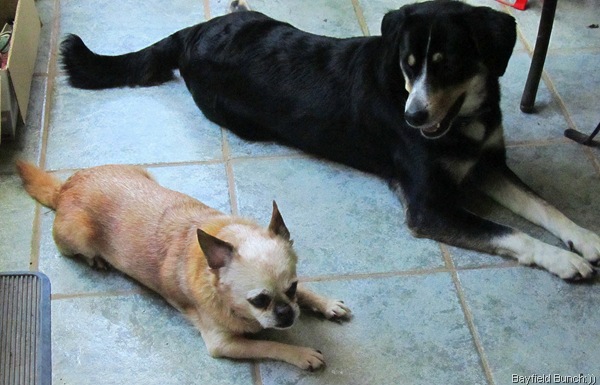 EVE CAME RIGHT OVER &amp; LAID BESIDE THE LITTLE MOTORMOUSE
Mitchell is where my Uncle Harry is so on our way to see him this morning we stopped at a farm north of Mitchell to meet Sadie, an Australian Shepherd/Rottweiler mix.  She was a year old, beautiful dog and just full of fire and energy.  Liked her a lot but she was just too much dog for us to handle and when we brought the Motorhmouse into the barn Sadie went right after her bowling her over.  It was plain to see that was not going to be a workable solution.

Leaving Sadie behind we headed into Mitchell to visit with Harry.  He is in constant pain now with his back and says the best part of his day is at night when he is sleeping.  No results back yet from his X-Rays and Cat Scan last week.  He is keeping up a brave front but spends most of his days stretched out in his recliner hardly able to move.
From Mitchell we headed straight for the little town of Zurich to meet Eve, a Burmese Mountain and Australian Shepherd Collie mix.  In other words, a Heinz 57.  It was love at first sight and an instant bond for me.  Eve was every bit as friendly and warm as Lexi had been last week and the clincher was Eve's gentle nature towards little Cora when we brought the little Beans in the house.  It was obvious right from their introduction they were compatible and would fast become great Pals.  Eve is not an aggressive dog.  At one point Motor laid down on the floor and Eve walked over and laid down beside her.  A very caring and gentle dog. 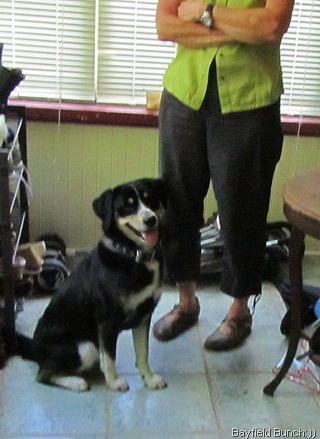 OUR FIRST MEETING WITH  EVE THIS AFTERNOON
We talked a bit with the owners and then drove down the street to the Vets with a few questions about spaying, etc.  It also gave Kelly and I a chance to see how each other felt about Eve.  The decision was unanimous, so back to Eve's house we went to talk with her owners.  Some tears were shed but they agreed to bring Eve to our house later this afternoon.  They wanted a chance to say goodbye to her.  With a younger couple's growing family, decisions about pets sometimes have to be reluctantly made.
We were home about 3 and Eve arrived about an hour later with her young family.  We all spent some time together showing the younger couple and their wee daughter around our place where Eve would be living.  Eve was flying around a hundred miles an hour and wouldn't you know it.....she landed ker-splash right in our frog pond.  No matter, she was just too excited to worry about getting wet.  And, we were just too excited to care about her getting wet anyway:)) 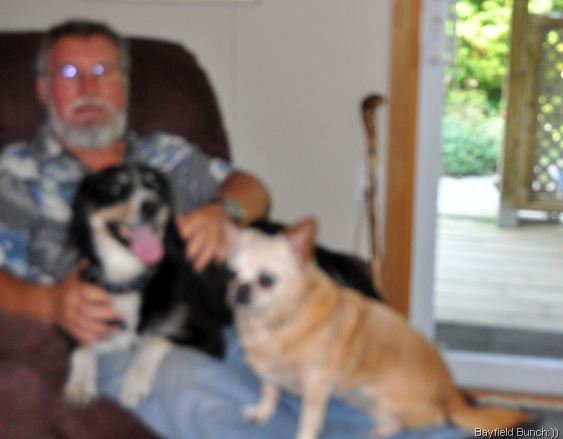 UNFORTUNATELY,  I HADN'T LEFT THE CAMERA ON AUTO FOCUS WHEN KELLY TOOK THIS PICK:((
Soon it was time for final good-byes.  A few tears, a few waves and the young folks were off.  Eve was now at home with the Bayfield Bunch:))  And, everything just seemed sooooo right.
She is just a darling and as I am typing this right now in our sun room she is sound asleep right beside me on the carpet.  She is just too pooped out from all the excitement and so are we.  From Monday's mental low we were rocketed in no short order into the highs of today.  It just all came together and we are sooooo happy to have her and we can tell she is sooooo happy to be here.  Of course I will have more to say about her tomorrow:)) 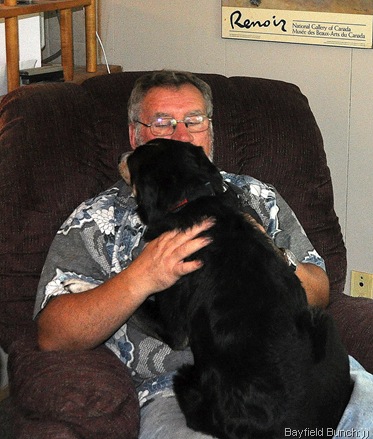 We thank everyone for all the kind comments on yesterday's post and agree that when one door closes, others are opened and today was a big door opening for us:))  Now, where was I before all this excitement started.

Took advantage of Monday's cooler morning temps to do more grass and shrub trimming.  An elderly fellow going by on his scooter stopped to say how much he enjoyed seeing our garden lights at night so that inspired me to carry through with a few more lighting ideas I had kicking around.  Tuesday morning we woke up to pouring rain.

If the heat is getting you down I suggest you cool off with some fine snowy glacier photos, cooling lakes and cascading waterfalls in the North Cascades National Park, Washington.  The  GYPSY LIFE JOURNAL folks were enjoying their beautiful cooling days while the rest of us are sweltering in the heat and humidity of a long hot summer.  Also, check out what happened when they were just pulling into a campground and a man yelled at them......."YOUR CAR IS LOOSE!!" 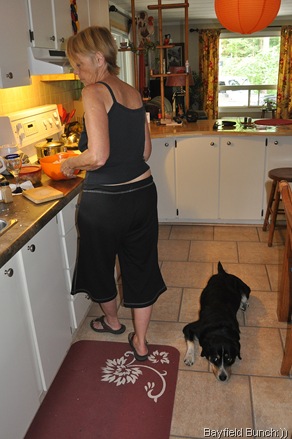 MOM'S NEW KITCHEN HELPER
Catching up on a few blogs this morning I noticed one of our fellow RV Bloggers in North Virginia is fast approaching a well deserved retirement.  His post a few days ago titled, I FEEL NAKED caught my attention.  You may find this man's career rather interesting, just as I did.  Paul and Marti Dahl from  R SANITY RV ADVENTURES are an RV couple planning to travel full time shortly in their Class A Motor Home.  Just a little matter of selling a house first.

If you happen to be traveling in Canada you might want to stay off Saskatchewan's secondary roads and IVAN will tell you why!! 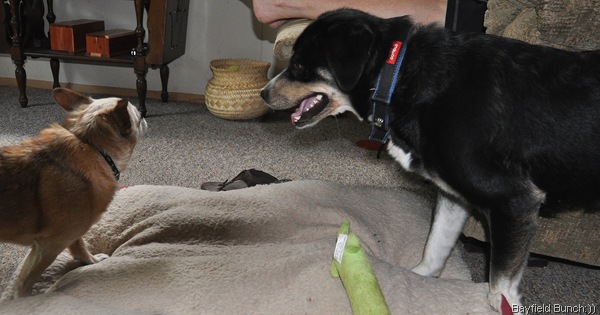 The
only thing better than right now will someday be the memories of right
now...... AL.