It was with sadness this afternoon we read about the death of fellow RV Blogger, Doug Dubrouillet.  LIVING OUR DREAM  Kelly & I first met Doug & JoAnn in December of 08 at a the  WAL-MART McDONALD'S IN YUMA ARIZONA.  They were the couple who were instrumental in Kelly & I ending up with the Ranch sitting job near McNeil Arizona the past 3 years. 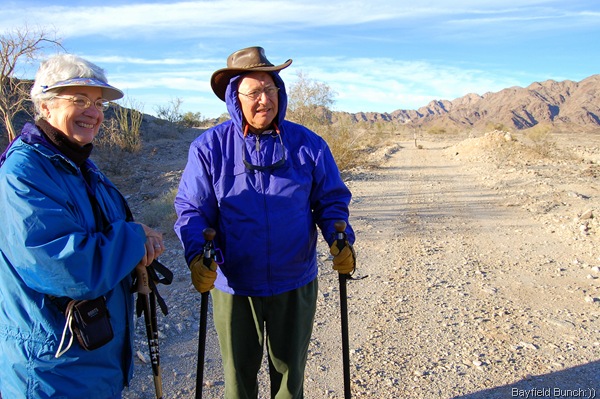 JOANN & DOUG OUT FOR A DODDER IN THE DESERT WEST OF YUMA, CALIFORNIA 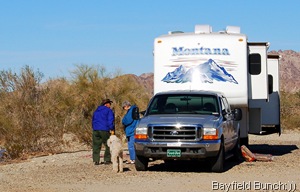 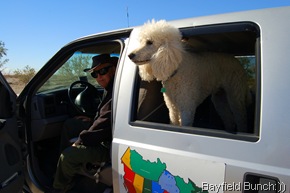 WAVING GOOD-BYE TO DOUG, JOANN & FILLMORE AS THEY HEAD BACK TO CIVILIZATION

After meeting Doug & JoAnne in Yuma they came out to do some boon docking with Kelly & I on OGILBE ROAD west of Yuma.  We saw them again about a month later in Borrego Springs California where they happily continued familiarizing themselves with the boon docking lifestyle. 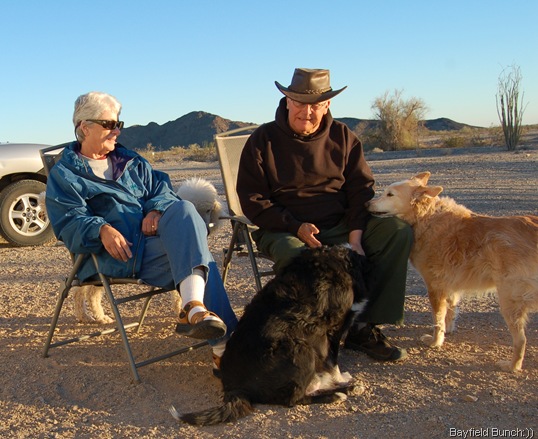 Never saw Doug & JoAnn again until  DECEMBER 12TH 2010 when we met them, along with Fred & Jo Wishnie at Margie's Corner Cafe in Sunsites, Arizona. 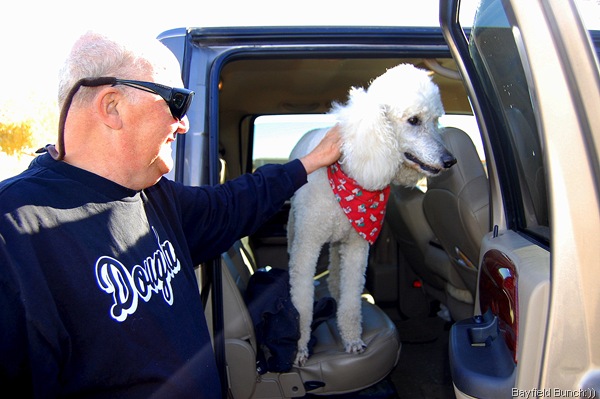 Our sympathies are extended not only to JoAnn, but Doug's family & friends as well.  ONLINE MEMORIAL SITE 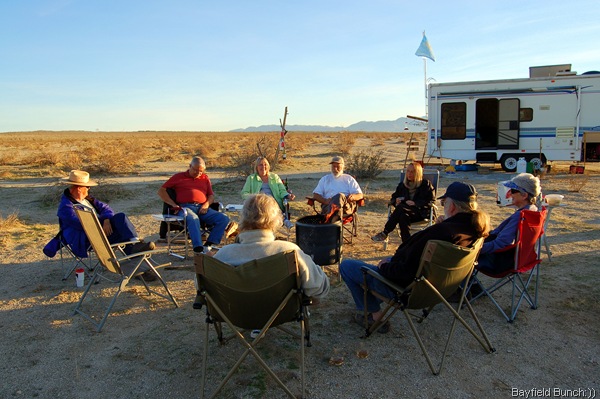 A few questions have come in about our waiting to hear about Lexi.  We are not exactly sure how a final decision is made at the Animal Love Foundation in London Ontario where Lexi is sponsored but we do think that the input from an animals Foster Home is likely an important part of the decision making.    I think that is a good thing for the Pet because it gives the Foster Folks a chance to assess if the prospective new owners will be a good match for the Pet.  The people who are coming to meet Lexi on Saturday will probably be assessed by Lexi's Foster Mom & then that assessment is forwarded to the agency.  It is Lexi's Foster Mom who after all, knows her best.  I think somebody or a board then makes the decision which home Lexi will be best suited for.  I think that is a right thing to do by putting a Pet's safety & security first.  We've got our finger's crossed that Lexi herself will put in a good word for us after meeting her this past Wednesday:))

Judy wondered in a comment on my Thursday post how long it took me to find my way back to the Jeep through the maze of Hospital twists, turns & hallways.  Fast answer to that question is about 5 minutes which included finding a Salmon sandwich & a Pecan Tart along the way:)) 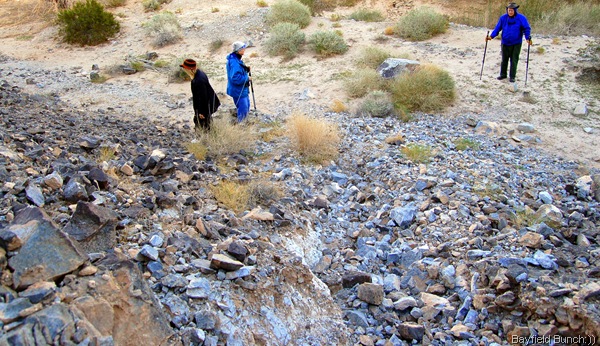 KELLY, JOANN & DOUG LOOKING FOR GOLD NEAR THE OLD TUMCO MINE SITE IN CALIFORNIA

And, it cost me $5 to get out of the Hospital parking lot.  Every time I go through those lifting arm parking meters at the Stratford Hospital I am reminded of my Mother.  She sometimes had trouble figuring out the coin meter or didn't have the right change or patience & would actually drive her car right through those wooden arms breaking them off if they didn't lift for her.  The front bumper on her small burgundy Chrysler actually had yellow paint marks on it from the arms.

Red, in California wondered why I couldn't figure out the mobility van driver's cell phone.  Simple, I am not in the habit of carrying or using cell phones.  I think cell phones are a great idea but I just have never seen a practical application for me to carry one other than for emergency use.  We do have a cell phone here but I never seem to remember to take it with me anywhere.  Our Samsung Bell phone at least has words on the buttons like, Talk, End, Back, Menu & Ok.  The driver's Nokia only had some colored buttons & no words.  Anyway, I am going to try & remember to get in the habit of carrying our cell phone more often.  Just never know when AB might have to 'phone home':)) 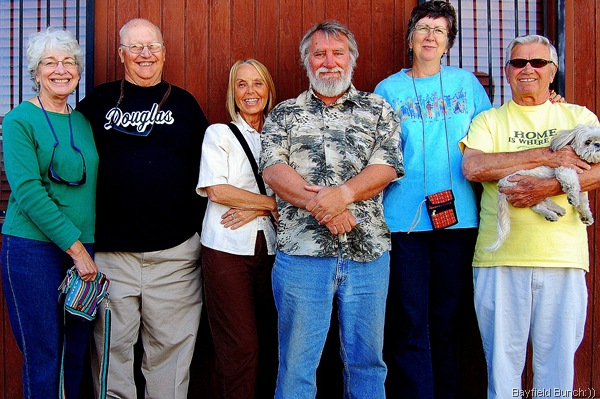 JOANN & DOUG, KELLY & AL ALONG WITH JO & FRED WISHNIE OUTSIDE OF MARGIE'S CAFE IN SUNSITES, ARIZONA...DECEMBER 12TH 2010
I sometimes forget to hit the 'Publish' button after reading a comment on my post & this morning on a routine check of my 'Overview' in Blogger Dashboard I saw 3 comments I had forgot to Publish.  I then 'Published' them right from the Dashboard.  Always a good idea to get in the habit of checking your Blogger Dashboard's 'Overview' to make sure you haven't forgot to publish a reader's comment:)) 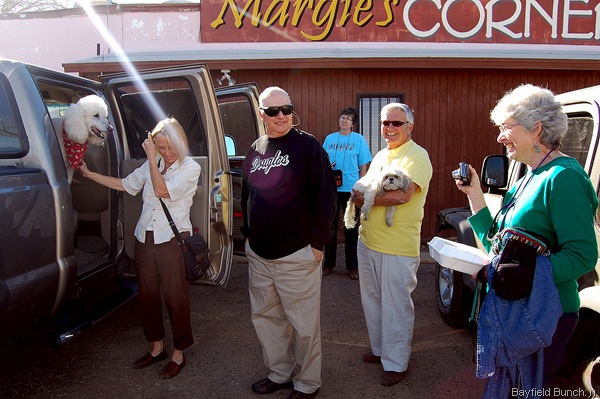 THE LAST PARAGRAPH:  I never did get to know Doug Dubrouillet well.  A bit of kibitzing in Yuma, a few words around a morning desert campfire one day & a couple emails back & forth a few years ago.  Some friendships are instant & some take awhile to develop & grow.  Doug & I just never spent enough time together getting to know & understand each other.  I wish you well my friend, wherever you are. 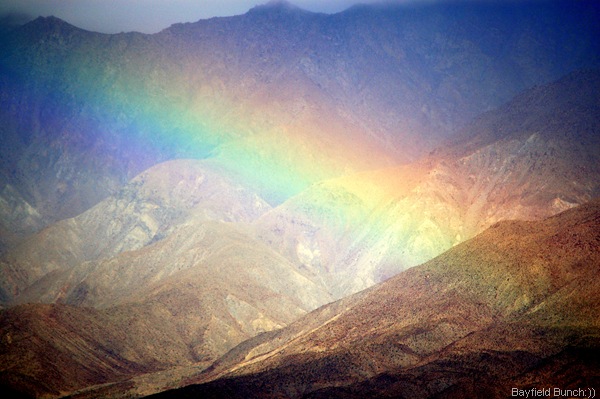 GROANER'S CORNER:((   A wife was making a breakfast of fried eggs for her husband. Suddenly, her husband burst into the kitchen. 'Careful,' he said, 'CAREFUL! Put in some more butter! Oh my gosh! You're cooking too many at once. TOO MANY! Turn them! TURN THEM NOW! We need more butter. Oh my gosh! WHERE are we going to get MORE BUTTER? They're going to STICK! Careful. CAREFUL! I said be CAREFUL! You NEVER listen to me when you're cooking! Never! Turn them! Hurry up! Are you CRAZY? Have you LOST your mind? Don't forget to salt them. You know you always forget to salt them. Use the Salt! USE THE SALT! THE SALT!' The wife stared at him. 'What in the world is wrong with you? You think I don't know how to fry a couple of eggs?' The husband calmly replied, 'I just wanted to show you what it feels like when I'm driving.'

The only thing better than right now will someday be the memories of right
now...... AL.