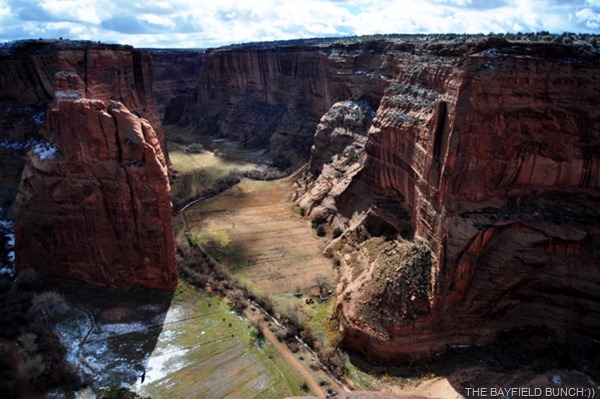 The sound of sleet has a sharper sound on the rig’s roof than rain does & it was a sleeting sound I heard off & on during the night.  At first light I could see patches of white ground outside.  We had got ourselves some snow. 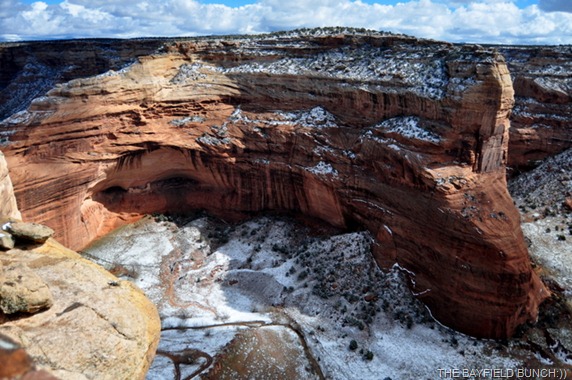 It felt sooooo good to see the sun rising through the trees of the campground.  Shafts of light beamed through our windshield lifting our spirits & immediately began a warming process in the rig.  The temps outside were totally freezing & made worse by a stiff breeze.  But, no matter, we could see sunshine & that was good enough to motivate us out the door by 9 & into the Jeep.  We headed off on the North rim drive of the CANYON DE CHELLY NATIONAL PARK.  A canyon that after being here for a few days we hadn’t even seen yet. 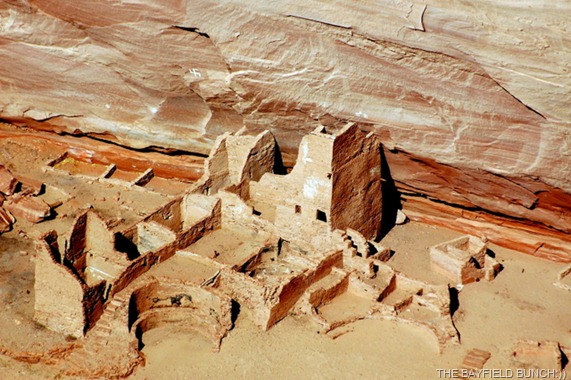 Noticed there was an increasing amount of snow on the ground as we gained altitude to our first stop, Antelope House Ruins.  I won’t give you the histories of the stops we made because all that can be found on line if anyone is interested.  What I will give you are my thoughts, feelings & some photos of the Canyon. 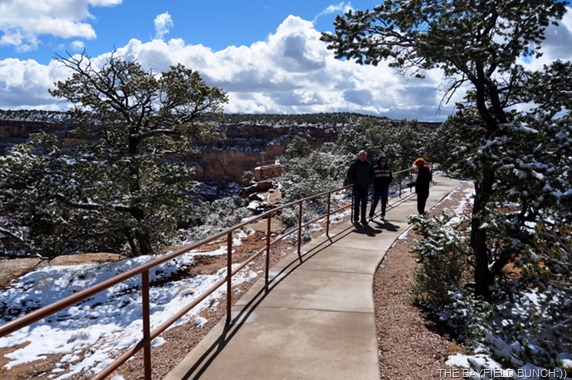 It was brutally cold & windy as we stepped out of the Jeep & headed for the Canyon rim.  Even if there wasn’t a Canyon here, the landscape was a work of art all on it’s own.  Mother Nature’s wintery hand had touched the shrubs & rocks with skiffs of snow.  A blue sky laced with white puffy clouds had turned the land into a picture post card photographer’s dream. 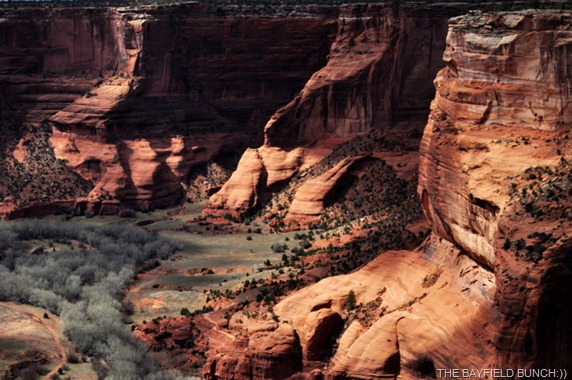 My first gaze into the Canyon was like no other because I realized right away this Canyon was like no other I had seen before.  The height from the edge of the accessible rocky ledge to the Canyon floor far below was dizzying.  Cows looked like ants.  The colors & morning hues were overwhelming as the sun cast slow moving cloud shadows across the greening valley floor.  Towering sandstone cliffs caught the sun’s rays to bathe themselves in unending colors.  Never had I seen a place like this before. 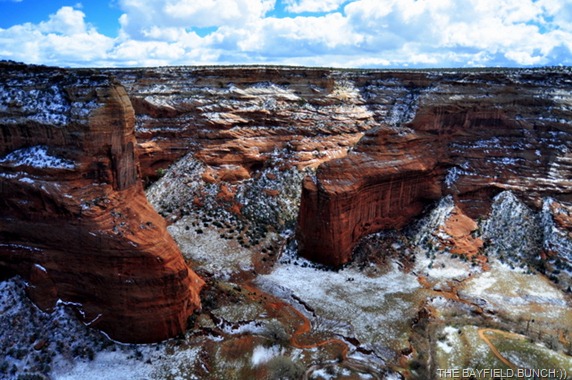 Our time at the rim was marred only by the biting cold winds which seemed to go right through us.  Had forgot my mitts, winter hat & had not thought to wear my lined winter pants.  Kelly’s nose was running & my fingers were froze with each photo I took.  Would have loved to stay there & relish in the beauty & history before us but we had no choice but to retreat to the warmth of the Jeep’s heater. 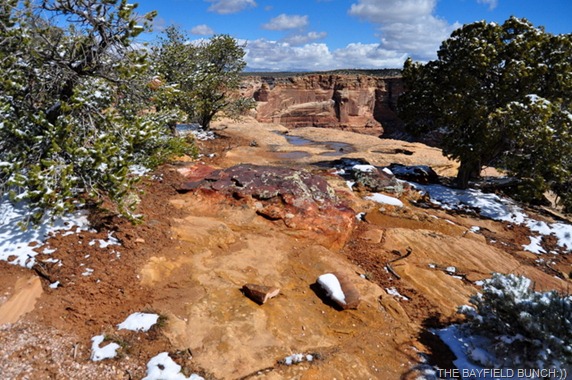 If I were to describe every stop we made along that north rim this morning & try to describe what we saw I would be sitting here at the keyboard all night.  I can tell you that we we spent a couple hours seeing everything we could before returning to the rig for a break. 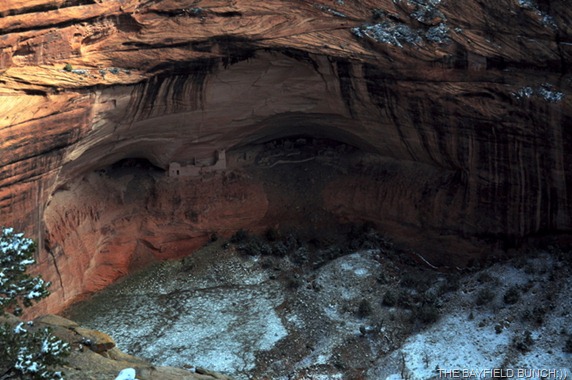 An hour later we were back into the Jeep again & off to do the South rim of Canyon De Chelly.  We made the last stop at the end of the road, our first stop.  This is where I finally got to see…..Spider Rock.  When you think of Canyon De Chelly you probably think of Spider Rock because it is the most identified & photographed feature here in the Park & with today’s lighting conditions it was looking especially beautiful. 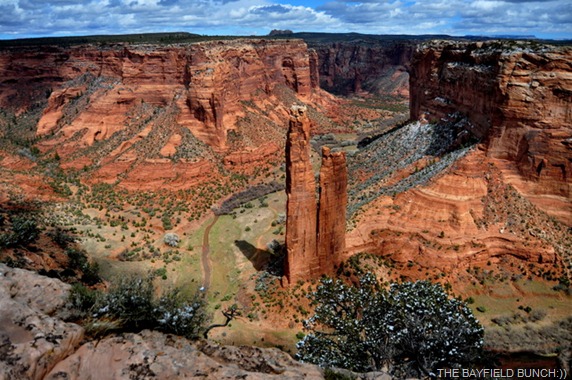 THE TALL SPIRES OF SPIDER ROCK ARE IN THE CENTER

We stopped into all the other overlooks on the way back to the rig including the White House Ruins location.  We will return there in the morning & descend a mile & a half into the Canyon itself.  It is the only place where people are allowed to hike in Canyon De Chelly. 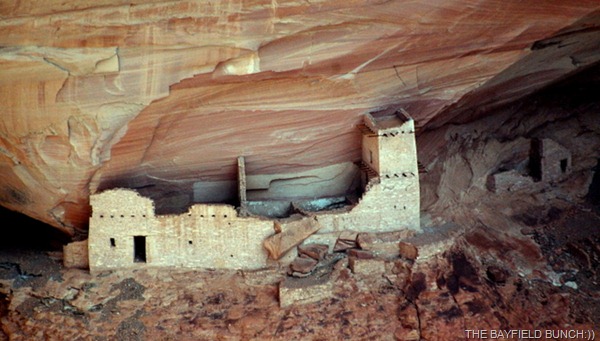 Now, I have two problems tonight.  I have completely overwhelmed myself with 264 photos today & have not yet begun to edit them.  Second, our internet connection is very poor & Monday night’s blog took 73 minutes to Publish.  If I load this post up with photos I could be here for days waiting for it to publish.  So, I will add a few pics & go with that.  Again, when we get home with a proper high speed connection I will put together a complete photo album on Canyon De Chelly.

Since going with a Verizon Air Card a couple years ago I think this is only the second time we’ve been in a dead zone for coverage. 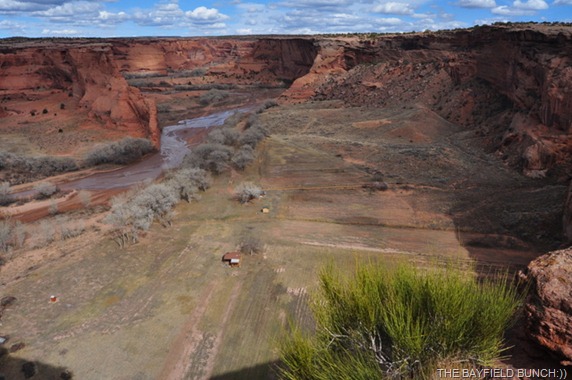 Like most other RV’ers out here I grew up in the late 40’s & early 50’s listening to radio in the days before television.  We had a big old floor model & a couple counter top ones & I have many memories of endless hours listening to those great old radio shows.   For anyone out here with an interest in those old radios, check out ERIK'S RV BLOG for a trip down Memory Lane:)) 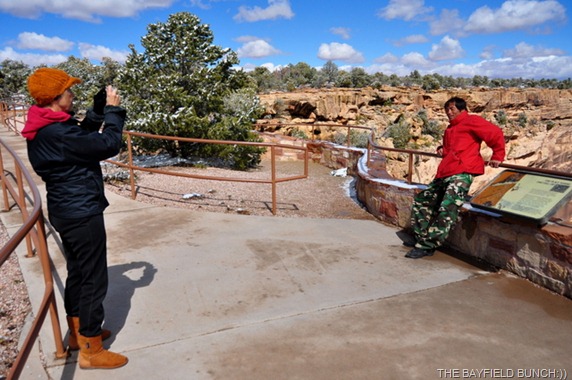 GROANER’S CORNER:((   You might be a redneck if your Jeep Pickup truck has a new sunroof because the shotgun fell off the rack when you slammed the door.