THE BAYFIELD BUNCH ROLLED OUT OF BORREGO SPRINGS THIS MORNING 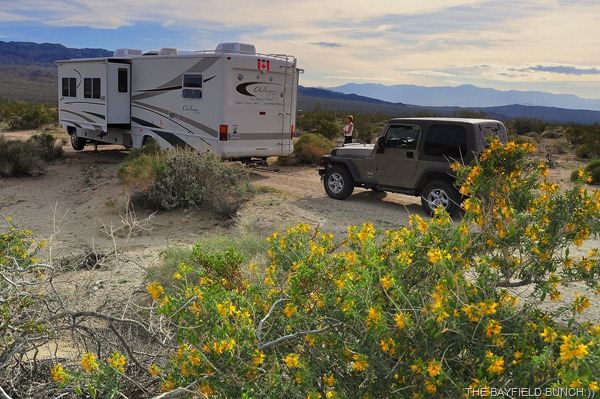 I may not like the hotter days but I sure do love the warmer nights & early mornings.  When I took Max & Checkers out this morning around 5 there was a real nice warm wind blowing the stars around.  Just gotta love that:)) 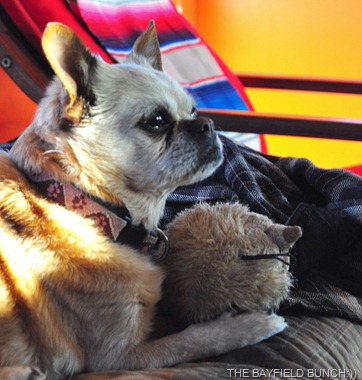 We had planned to roll out of Borrego Springs Monday morning but over coffee around 6 this morning decided to hit the road today instead.  Figured we might as well get over to the big Arco gas station west of the Salton Sea to get our tanks dumped before all the Jeep Rally folks crowd in there later so this post is coming to you from just outside Joshua Tree National Park tonight.  We have a 4 bar Verizon signal so all is well. 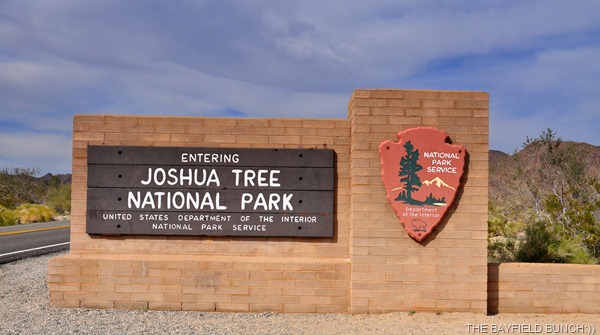 Minutes after making the decision to hit the road this morning I was up on the roof of the Motor Home securing the solar panels.  Never takes much to get me motivated when I know we’re going somewhere:))  Our big slide even came in with no problem but I did have to help the rear passenger side problematic hydraulic jack up into it’s stowed position with a scissors jack.  At 8:30 a.m. we waved a good-bye to some distant neighbors, had a last glance over at distant Borrego Springs to the southwest & swung east on S22 heading for the Arco Gas Station at the junction of #86 west of the Salton Sea.  Adieu Borrego Springs till next time:))

As we approached the eastern end of S22 we could see a sea of RV’s, Jeeps & tents scattered about on both sides of the road.  Our reason for heading out early is that I knew a lot of these people would be packing up & crowding that Arco station to dump tanks & take on fuel.  There are 5 dump stations & sure enough,  they were all busy.  Luckily we only had one guy in front of us.  This huge parking lot was like a moving game of Musical RVs.  Everybody going every which a way maneuvering for diesel, gas, dumping, water & propane.  Jeeps, jeeps absolutely everywhere.  Probably took us a good 40 minutes to get everything taken care of.  A nice fiver driver let us into the long line of rigs on the highway as we left Arco.  Traffic was backed up to the west as far as we could see with most of them being Jeeps & RV’s.

Because we have a Jeep, some may wonder why we did not go anywhere near this big week-end off-road Jeep event just a few miles from where we were Boon Docking.  As mentioned many times before, Kelly & I have a tendency to avoid being anywhere that has large groups of people & traffic gathered.  Whether it be a Jeep rally, big motorcycle event or an RV rally, it’s just not the place for us anymore.  Years ago we did a lot of that stuff….but that was years ago & our priorities have changed. 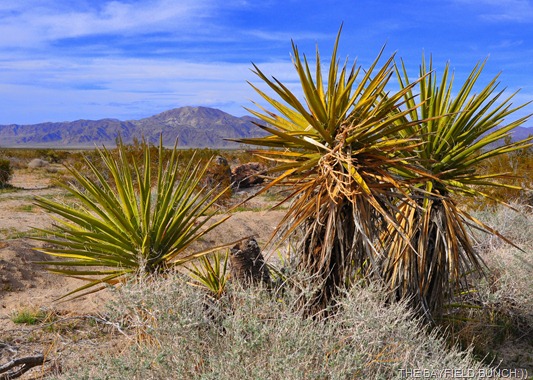 Headed north on 86 to a little place called Mecca.  A couple years ago we had come this direction on our way to Quartzsite Az so knew of a nice quiet shortcut drive from Mecca to Joshua Tree.  No problem remembering the former route & by 11 o’clock we crossed over I-10 on the road leading into the south end of Joshua Tree National Park.  Five minutes later we found a quiet spot & shut er down for the day:)) 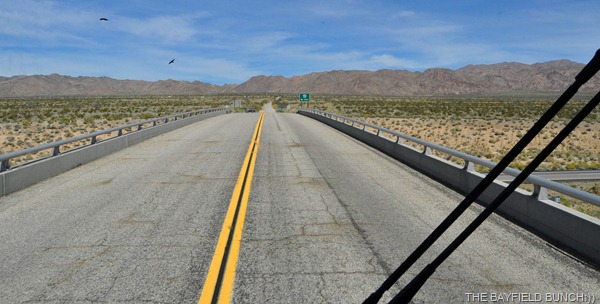 We knew of some BLM land in the area so that’s why it didn’t take us long to find ourselves a suitable spot in the desert.  Unhooked the Jeep, grabbed a bite to eat & had a quick doze while Kelly caught up on the increasingly busy side of her work back home with Deer Park Lodge.  Around 2 we headed on up the road into the park with the Jeep to see what we could see on this slightly overcast day.  Simple answer there is to say we didn’t see too much.

NO, THOSE ARE NOT JOSHUA TREES

We had left the Jeep a little low on gas so only went about 20 miles in & returned.  Not a lot to see here in the southern end of the Park but we understand the true Joshua Tree section is located in the higher north end which is the beginning of the Mojave desert.  We will probably roll the Motor Home through the Park tomorrow morning & out the north end to have us a look at another BLM (Bureau of Land Management) area we have heard about to the Northeast.  We will then Jeep back into the Park for the day & see if we can stir us up a little Mojave desert dust:)) 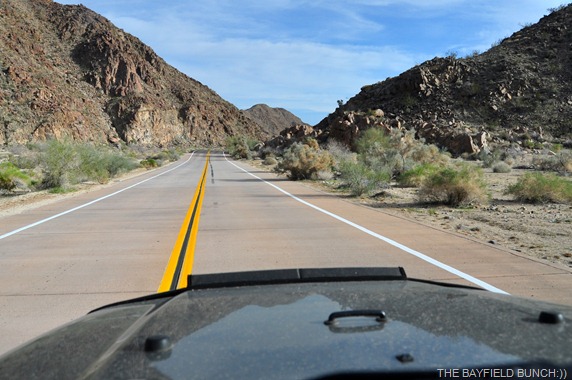 DRIVING THROUGH THE SOUTH END OF JOSHUA NATIONAL PARK

We received this latest note from Joani a couple days ago regarding Microsoft’s Streets & Trips promotion….. “ We are expecting the product in about two weeks.”  So, don’t hold your breath anyone cause it’s going to be another two & a half weeks or so before they can begin shipping out the software.  Back to bed Sam:)) 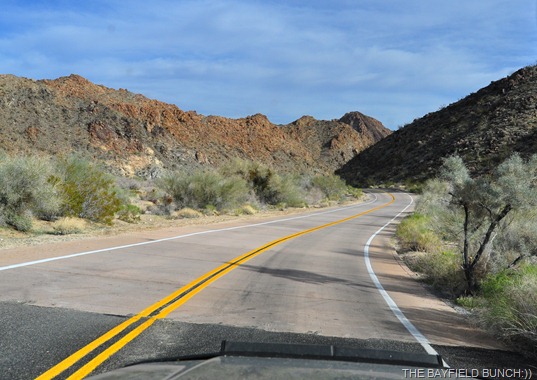 Ever wonder what an Avocet looks like?  Well, I did too until I saw one on LIFE'S LITTLE ADVENTURES.  These folks did an overnighter in their Lazy Daze at Arizona’s Whitewater Draw.  That happens to be only a mile from where the Bayfield Bunch has done a bunch of ranch sitting the past few years. 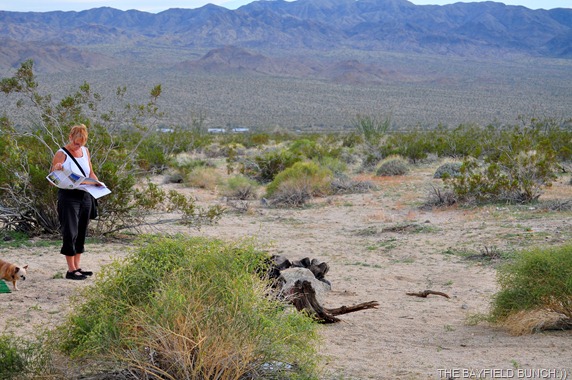 As I sit here in my chair tonight with the computer on my lap I can look out the rig’s east window & straight ahead through the windshield to see endless ribbons of lights twinkling along Interstate 10 about a mile to the South.  Where oh where are all those people going to & coming from in such a hurry!! 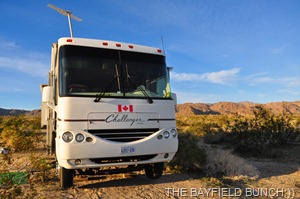 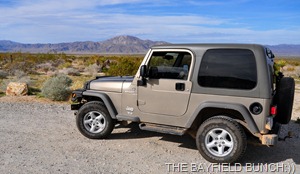 Hope to bag me my first Joshua Tree tomorrow:)) 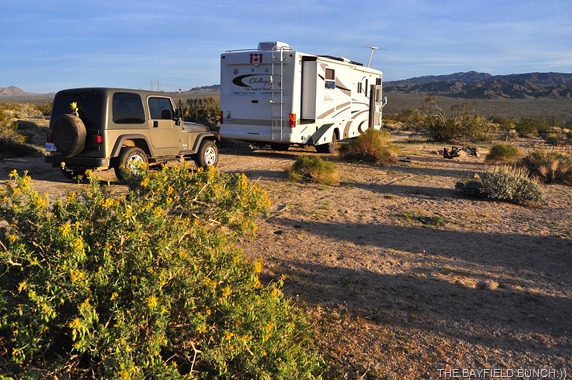 -When you finally wash the mud off, everyone thinks you bought a new Jeep

-When the best route from point A to point B is through the rock pile or over the mountain.

-People over 50 can't get in the Jeep without help.

-When you pull into the unplowed parking spots on snowy days

-You are the only one on the street who doesn't plow their driveway.

-You have a high-water mark INSIDE the Jeep