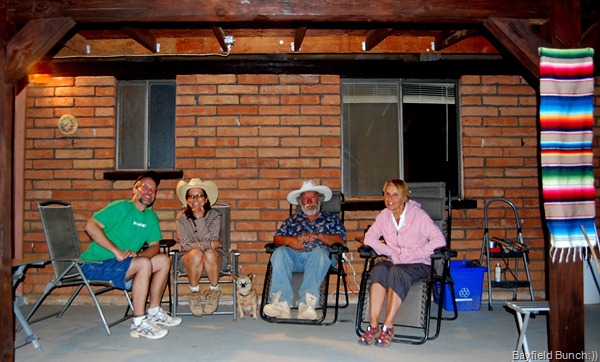 It was nearly a hundred years ago when Mexico’s Pancho Villa invaded the United States in Columbus, New Mexico.  He hasn’t been seen or heard from since but don’t tell that to Hailey from ROADTRIP 2010 because she has been up in a tree keeping a wary eye out for that wily Pancho these past few days!!

Donna & Russ are looking forward to spending some lazy days in their brand spanking new Lazy Daze in a few days.  Another sentence like that & I’ll be in a daze myself:))  Watch for their new rig coming soon at TRAVELS IN 'THERAPY'.

Noticed this morning we have a few new blog Followers on our list.  The Bayfield Bunch welcomes…..Felicia & Jeff from HIGGINS POD…..Ron & Thelma from RON & THELMA & LITTLE ELI…..David from RV EXPLORING AMERICA IN RWHLST8…..Cindy & Ken from FRERX ADVENTURES…..Aaron at DESERT ZONE…..and last but not least, RUNNINGLINER.  Thanks to all you folks for dropping by & adding yourselves to our Friends/Followers list:))

Had my fuel price wrong for California a couple days ago.  I think it was diesel fuel I was thinking about.  Paid $3.32 in Elfrida yesterday for gas & that is a 40 cent jump in about a week & a half.  Doesn’t sound like anyone is worried about the rising prices so I’m just going to go stick my head back in the sand & forget about it….until we have to fill up the Motor Home again.  What a rude awakening that will be!!

How nice to finally feel warm air earlier in the mornings now.  With the morning sun spilling over the Swisshelm Mountains onto the Valley floor this is a very special place for sure.  I enjoy filling up the bird feeders as the the feathery little fellows are literally jumping up & down on the branches near by.  As I turn my back & head for the rig I can hear the whirring of many little wings as my tiny friends all swoop into the feeders.  Somewhere in the far distance I hear a single cow & from another direction the faint barking of a dog.  The birds are happily twittering & a slight breeze rattles the lanyard on the tall flag pole.  It was just one of those special moments this morning.

Biggest part of my day was spent dragging down Sagebrush weeds with the Jeep & old tractor tires & then burning the small piles.  Someone commented how clever it was of me to come up with the tire dragging idea but alas, it was not my idea.  It’s a common thing for dealing with weeds on a ranch in these parts & it was Ray from the McNeil Ranch that had spotted those tires all bolted together & told me about it.  My main reason for dragging those weeds down had to do with a fire hazard to the house.  The Sagebrush was so thick & dry that if I fire ever started somewhere it would sweep right up to the house in no time.  Felt it was important to create a fire break but boy oh boy is it ever dusty now.  Arizona has waaaaaay more dust than it really needs & we probably have more dust in the Motor Home than Oklahoma lost in the dust bowl years.

BURNING ONE OF MANY SAGEBRUSH PILES

Jim & Rene from LIVE. WORK. DREAM. who are now on the property we just vacated last week walked over around 4 with a big pot of Chile Beans On Rice.   Kelly had made up a Tuna Casserole & after a property walk around we all sat out on the front porch chowing down on Tunabeans enjoying the beauty of the Swisshelm Mountains sweeping up from the eastern side of the valley floor.  Food & conversation was great as we watched the nearly full moon climb lazily into the twilight sky.  Desert nights always cool off quickly so as darkness settled in Rene & Jim, who were in shorts, headed back down the lane for the 4 minute walk back to their rig.  Nice way to wind down the day. 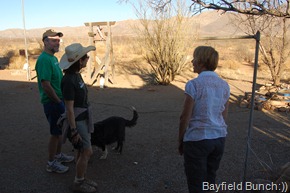 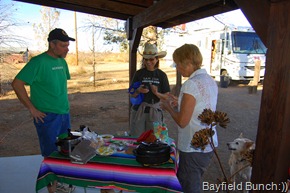 I must admit that Kelly & I are still waffling back & forth on this ranch deal.  At times we are totally convinced that this is the right decision for us.  Other times we are filled with doubt & apprehension.  It is a very big decision & not unlike the one we made a few years ago when we decided to buy an RV & hit the road as Snowbirds for 6 months of the year.   Seems to be at night when the fears set in but as soon as I step out of the rig in the morning & feel the total peace of this place envelope me I am convinced we are doing the right thing.  Sometimes during the day Kelly is up for the idea & I am down on it.  Other times it is opposite & most times we are pretty much on the same wave length.  Oh, tis quite a Roller Coaster we are on over here at the Bayfield Bunch.  I do have some other thoughts & feelings about all this which I may share with you in a future post.  Thanks again to all the folks for their ‘comments’ & ‘emails’ today.

GROANER’S CORNER:((  'O'Halloran,' asked the pharmacist, 'did that mudpack I gave you improve your wife's appearance?'  'It surely did,' replied O'Halloran, 'but it keeps fallin' off.'

The only thing better than right now will someday be the memories of right now…. AL.