JEEP RUN TO THE GATES OF MULESHOE RANCH 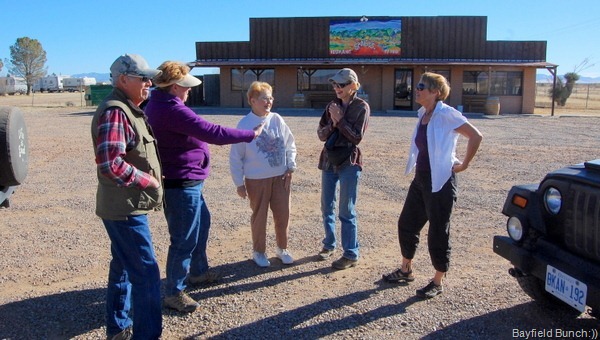 We met our 4 Jeeping Pals Jeanie & Ray & Rosanna & Carol in the parking lot of Sandy’s restaurant in sunny Sunizona this morning at 10.   Arizona highways 191 & 181 meet here & it is a good jumping off spot for Jeep trips in the area.  Sandy’s is a ‘new owner’ restaurant with a growing ‘good food’ reputation.  Sandy’s also has an RV Park attached.  Now, how convenient is that:)) 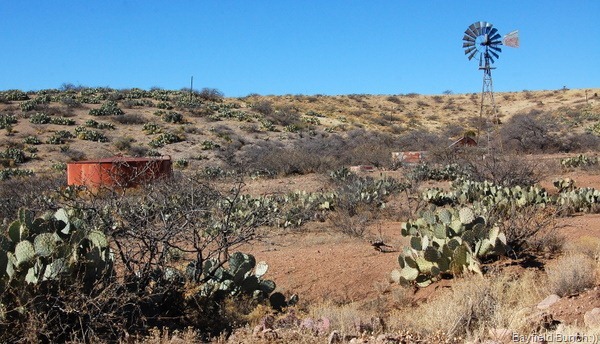 It was a beautiful morning for an outing with warm temps & a big blue Arizona sky.  We formed up our little convoy with Jeanie & Ray leading, we the Canadians in the center, with Rosanna & Carol riding shotgun in the rear.

Today’s destination was the MULESHOE RANCH CONSERVANCY AREA northwest of Willcox Arizona.  This is a 49,120 acre tract of land that just goes on forever & ever through rolling hills of yellowing grass.   Beaver Tail Cactus are in abundance everywhere.  Not a lot of trees but a generous helping of Soapstone Yuccas & Agave plants.  Beyond the rolling hills are distant mountains towering above the horizon all the way around us.  This was new territory for us so my mind was busy scrambling through it’s mapping memory banks trying to put names to the various mountain groups. 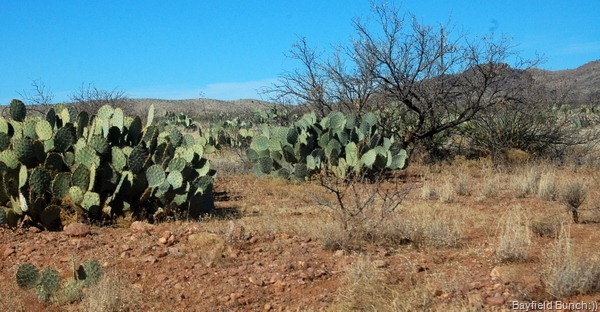 The road was dusty & a bit bump infested in spots with a few sections of nasty washboard trying it’s best to turn the Jeep sideways.  We never hit any stretches where 4 wheel drive was required & after a couple hours of scenic driving we reached the trailhead for the Muleshoe Ranch.  And, the Ranch was closed today!! 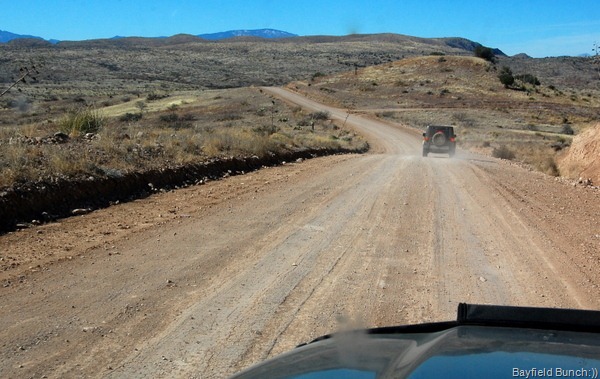 We determined from the reader boards at the trail head that from this point on the road became rugged & only 4 wheel drive vehicles were allowed.  In fact, drivers are required to sign a register stating name, type of vehicle & purpose of visit before proceeding further into the Muleshoe range. 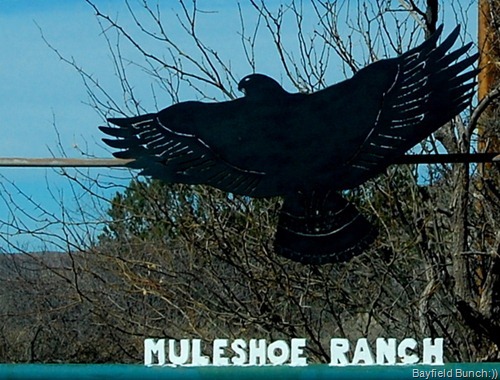 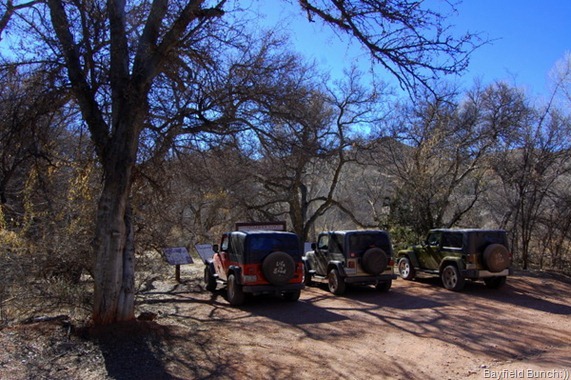 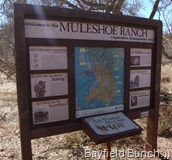 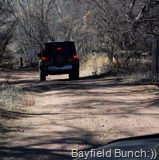 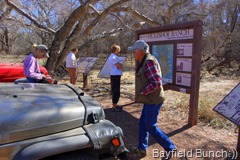 We decided, because of the time of day, we would return again in two weeks after getting a much earlier start to the day.  Apparently there is lot to see once the Muleshoe Range is entered including a movie location from the latest TOMBSTONE MOVIE starring Kurt Russell a few years back. 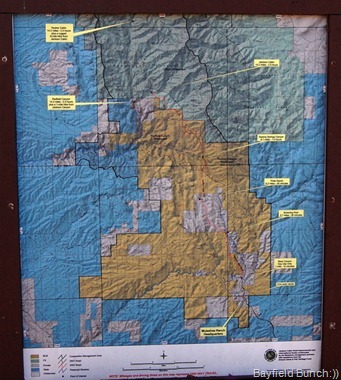 We decided this trailhead area was a good spot for lunch so without further ado out came the snacks & we all stood around by the Jeeps kibitzing & munching our oats & hay.  Then, it was back into the Jeeps & back out the long winding dusty road heading for home. 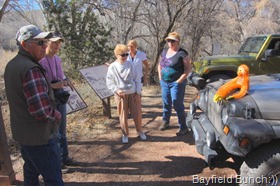 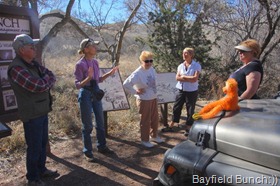 I THINK THESE TWO GOT SOMETHING GOING ON HERE:)) 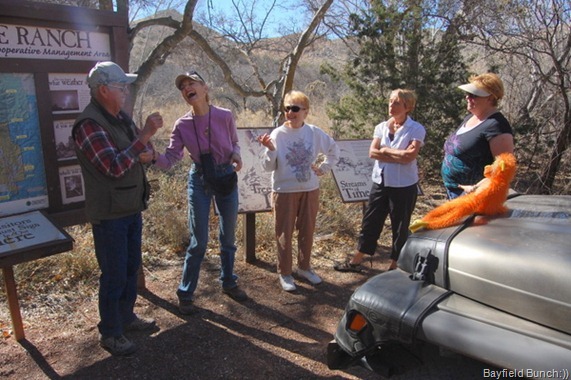 HERE’S ROSANNA BELTING OUT A FEW BARS OF ‘THE STAR SPANGLED BANNER’    :)) 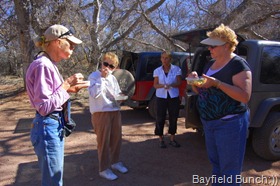 IT WAS KIND OF A STAND UP JEEP BUNCH LUNCH TODAY

At a fork in the road we parted with our Jeepster Pals as they headed for Benson & we headed back down to Willcox.  Kelly wanted to stop in at the Bonita Bean Company located south of Wilcox so that was our destination on the way home.   Grabbed a couple sacks of beans.  One is a 9 bean soup mix & the other one is Pinto beans.  Kelly is a big bean person & I am just kind of a little mashed potatoes & gravy guy:)) 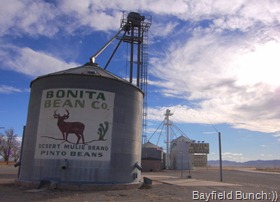 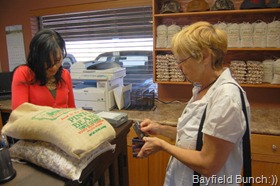 PICKING UP A FEW SACKS OF BEANS AT THE BONITA BEAN COMPANY SOUTH OF WILLCOX, ARIZONA

It was late afternoon when we arrived back at the rig & tonight I have been outside cracking off some pics of the full Moon coming over the Swiss Helm Mountains.  It’s late now so I probably won’t do all the photos tonight & will save some for Thursday night’s blog. 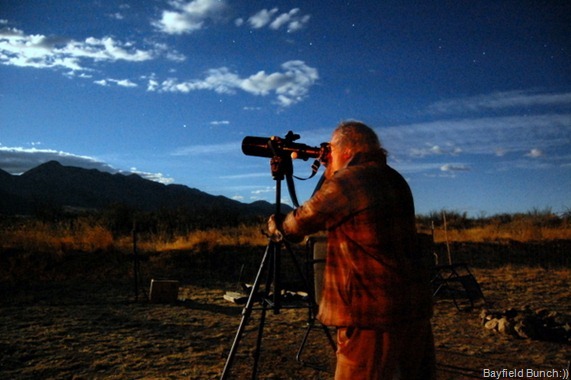 GROANER’S CORNER:((  A research group on sea mammals captured a rather odd porpoise on one of its trips. Its peculiarity was that it had feet. After they had photographed and measured the poor thing, they prepared to set it free.

"Wait a minute," said one of the researchers, "Wouldn't it be a kindness if our ship's doctor here were to amputate the feet so that it would be like other porpoises?" "Not on your life," exclaimed the doctor,

"That would be defeeting the porpoise."