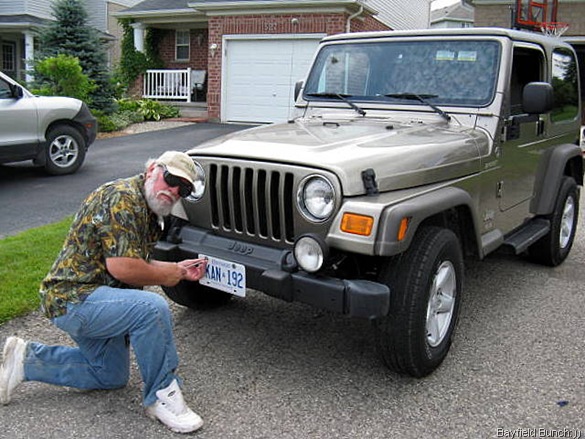 PUTTING THE LICENSE PLATES ON IN WATERLOO THIS MORNING:)))))

First things first tonight.  Thanks to everyone for sending in suggestions, probable fixes, & possible causes for my ongoing 'Error 400' blog problems.  By the time I went to bed Sunday night I was so frustrated with this whole blog publishing thing that I resigned myself to just packing it all in.  Considered doing the posts using blogger again but after using Live Writer for about a year I had no interest in going back to the old blogger ways.  Even if my Live Writer program isn't functioning correctly I still think it's the best blog platform out here for bloggers.  Ease of use & creative benefits are it's strong points.

By the time I woke up this morning around 5 the magic night time fairies had restored my head to some sort a semblance of reasonable sanity & the thought occurred to me of trying to publish the post on a different computer.   So, with that thought in mind around 6 a.m. I flopped myself into my recliner, hauled out our Win 7 Toshiba lap top, & copied & pasted the blog text into the laptop's Live Writer format. I then plucked out yesterdays photos from the desktop with a thumb drive & popped then into the Toshy laptop as well.  Inserted all the exact same pics as the night before, held my breath & hit the 'Publish' button.  Only took about 20 seconds & the post was successfully published with no dreaded Error 400 message.  That told me our desktop computer itself may be the fault.  Had forgot to put the tag lines in the bottom so no problem as I typed in some key words & re-hit the 'Publish' button, but....ERROR 400!!!!  It was OK though because the blog had already published previously, but that set to thinking maybe the problem lies with that tag line at the bottom.  Sooooo many variables.

THE JEEP IS DEFINITELY SMALLER THAN THE SANTA FE

RICK sent me over a possible fix this morning which I haven't tried yet, but I will shortly.  Other folks sent some site addys to look at & RETIRED ROD figures it's a Google problem & suggested there may be a limit on content.  I do put a lot of high resolution photos in my blog so I have always kind of suspected that might be the culprit too.  Anyway I am going to try what has been suggested & maybe do the next few posts on the laptop.  Maybe less photos too.

We were out the door headed for Waterloo Ontario by 8:15 this morning & what a beautiful morning's drive it was.  The terrain north west of Kitchener-Waterloo is Mennonite country with endless acres of rolling farmlands bordered by forests of  shaded green.  Cattle lazily grazing in fields with big white puffy clouds overhead in a deep blue sky.  Truly a peaceful & tranquil scene.  One only wonders how many short years it will be before the cities eventually creep out this way crushing & flattening everything in it's steamroller path.  All this natural beauty will one day be devoured by parking lots, big mega shopping malls, & miles upon miles of.......suburbia!!

The lady with the Jeep already had the plates off so we quickly exchanged paper work & headed for the license bureau.  I was surprised at how lite the traffic was in Waterloo.  Of course I always expect the worst of everything so when things go well, life is a bonus, & when it doesn't, I can turn to the person nearest me & smugly say, "see......told ya so!!"   Kelly busily filled out the paperwork sitting in the car while I quickly zipped into the license bureau & embedded myself in the long line-up.  I was number 23 & they were still coming in the door behind me.  Of course if I'm not number one in any kind of a line up I'm just a jumpin!!  Noticed the clerks behind the counter were very fast & efficient & about 20 minutes later Kelly & I took possession of our new Jeep license plates & of course the Government took possession of our hard earned monies in the form of taxes.

Plates in hand & paper work behind us we were buoyed by our good fortune at having everything go so smoothly this morning.  Celebrated that with a quick Tim Horton's stop & then back to the Jeep ladies place to put the new plates on.  Spilled a bit of coffee on the driver's seat so that instantly put the Bayfield Bunch stamp on the Jeep & made it all official:))  With a hand shake & a hardy 'Hi-O Silver' we were off down the street, round the corner & west bound heading for the sanctity of the serene countryside.  The serene part didn't last long for me though as I slipped my ZZ Top CD "Eliminator' into the player again, tweaked the bass/treble/balance/fade, cranked the volume & let Frank, Dusty, & Billy, chase me down the road just like the good old rock 'n' roll days.  Kelly was following me about half a mile back in the Santa Fe & had to roll her windows up.  My music listening tastes have greatly changed over the years but after all..... this was a Jeep, I was a kid today, & ZZ Top just went with the territory:)) 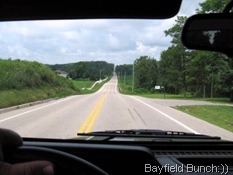 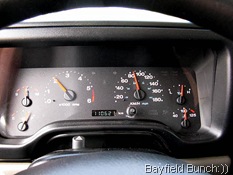 We stopped at the Ritz Villa in Mitchell on the way home & met up with my Aunt Jean from Sarasota Florida whom we hadn't seen in a couple years. Some big hugs & in we went to visit my Uncle Harry in his room.  So far, Harry continues to do well in his new surroundings.  We were finally back in Bayfield about 4. 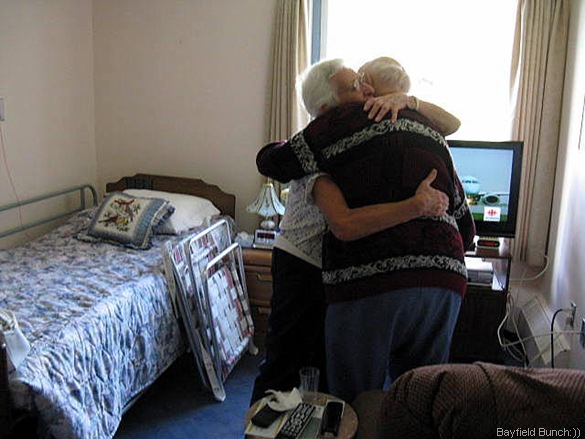 BROTHER & SISTER MEET AFTER A LONG COUPLE OF YEARS

The Jeep has 2 tops so we had the previous owners take the soft top down & put the hard top on because it was the only way to get the hard top back to Bayfield. Of course the first order of business was to take that hard top off & get the soft summer top back on.  Well, so much for that.  There is a simple wire connector plug which connects to the hard top for running the dome lights, washer, & rear wipers.  Do you think we could get this simple plug unplugged.  Not a chance!!  Not even head honcho mechanical wizard Kelly couldn't figure out how to disconnect the darn thing.  It's one of those simple mossmagators that has a knack to it.  Once you know the knack the disconnect is simple.  Because we don't know that 'knack,' the hard top could remain on the jeep for decades to come so it's off to the Bayfield Garage in the morning to be totally embarrassed by someone with 'the knack' who will undoubtedly unhook that connection in about seven tenths of a second!! 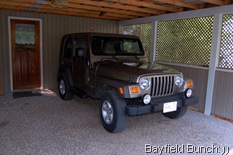 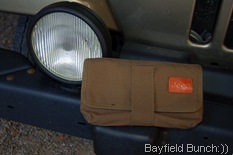 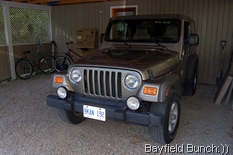 To give what's left of my blog confidence a boost I will keep the photos in tonight's post to a dull roar, keep my finger's crossed & hope the blog publishes.  Maybe I'll apply Rick's solution first.  And again, thanks to everyone for the positive comments on my ongoing blog problems.  Hope none of you get inflicted with that miserable Error 400 thingy!!  Not ever, not never!! 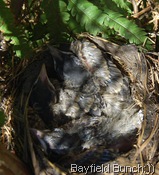 OUR 3 LITTLE ROBIN GUYS ARE GROWING

Tourists see the world, travelers experience it.
"UNTIL ONE HAS LOVED AN ANIMAL, PART OF THEIR SOUL REMAINS UNAWAKENED"
OUR BLOGGER WEBSITE http://thebayfieldbunch.com/
OUR PHOTO ALBUMS http://picasaweb.google.com/stargeezerguy/
AL'S SMUG MUG PHOTO GALLERY http://stargeezer.smugmug.com/ (a work in progress)
The only thing better than right now will someday be the memories of right now...... AL.