WE MOVED OUR HOUSE AGAIN THIS MORNING:))

THIS MORNING'S SETTING MOON OVER THE SAN YSIDRO MOUNTAINS

Made sure we were up early this morning.  Didn't want Wandering Willy squeaking out on us & we knew he would be packing up his satellite gear about 6:30.  Nice sunrise & no wind so looked like a good travel day for him & I think he was hoping to make it up the other side of Bakersfield.  I think he'll probably be back in British Columbia & home by the week-end for sure. 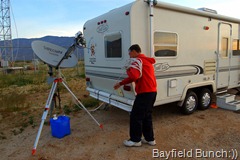 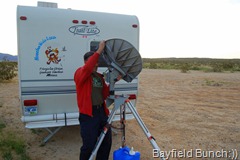 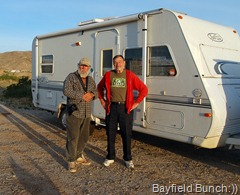 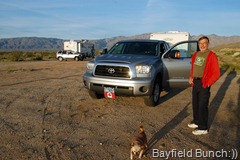 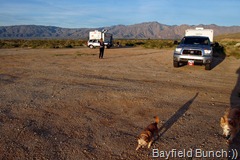 Took a few pics as WW packed up his stuff, did a lights, turn signals, & brake lights check on the trailer, said our good-byes & Wandering Willy was cheerily off into the sunrise.  And I think cheerily is a fitting description for Bill.  He just has that about him.  He also wanted me to let folks know that he would maybe try to get a blog out on the way home somewhere.   But, if we don't hear from him he is probably fine.  Like he said, his blog is for traveling & when he's home it's hard for him to think of anything to blog about.  When he pops up on our blog list I will let folks know. 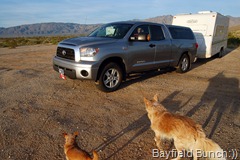 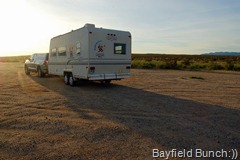 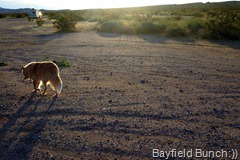 Thought we would have us a look for a better spot this morning & it wasn't long before we found one.  We came across the site where a couple of fellows had their Airstream trailers parked when we were here in January 09.  Drove the computer over to the site & was surprised we could get 3 out of 4 bars on our Verizon  internet signal.  That was the clincher so we packed up all our stuff yet again & headed the quarter mile to the new location.  It's further back from the highway & now we can see the greening Clark Dry Lake Bed all the way back up into the canyon.  Really a nice spot & thanks to the Airstream trailer guys, Michael & Paul we have a nicely laid out & stone bordered spot. 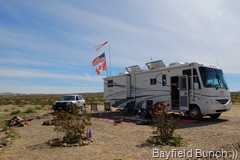 In the last couple of years here at the Clark Dry Lake Bed site we met a fellow by the name of Butch & it was he who first took us up into the Palm & Borrego Slot Canyons.  First thing we did when we pulled in a couple weeks ago was look for Butch but he was not to be found.  Hauled my binoculars out back then & scanned all the rigs in the area we knew he would be but didn't spot his rig. This morning when we found this site & recognized it as the Airstream site we emailed one of the guys who had been here just to say 'hi, we're on your old site.'  Minutes later an email came back from Paul saying they were all over in Slab City including Butch.  Said they were heading up into Joshua State Park later in the month so we may see them there.  It's a small but hugely internetted world we live in out here in the RV community. 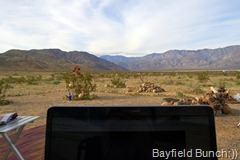 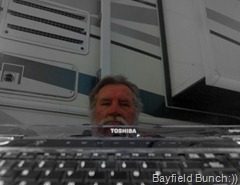 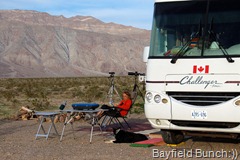 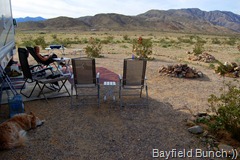 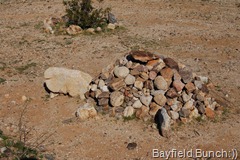 Noticed we have some new blog followers so a big welcome goes out to  Cyndi, & jld52405, plus Gail & TC's travels.

Noticed in Facebook that MOTTY had inquired if we made it all the way up to the palms in Palm Canyon here in Borrego Springs.  The answer to that is yes, & you can see the pics from the day our desert friend Butch led us up there on Dec 21/07...BORREGO SPRINGS PALM CANYON HIKE

Well, I think I will uncharacteristically keep this blog short tonight, throw in a few pics & call it a day.........

GROANER'S CORNER:((    Q: What can a husband do when his wife is going through menopause?

A: Keep busy. If he's handy with tools he can finish the basement & when he's finished he'll have a place to live!!