CANYON LAKE APPEARED OUT OF THE RUGGED DESERT & MOUNTAIN LANDSCAPE

Whewwww, it's been a very long day again.  Just finished editing & paring down 200 pictures & I'm just beginning blog number 737 now at 9 P.M.  Gonna be another late night.  Last night's blog took an hour to publish so it was the stroke of midnight when I tucked in the little Motormouse & pulled the covers over my head. 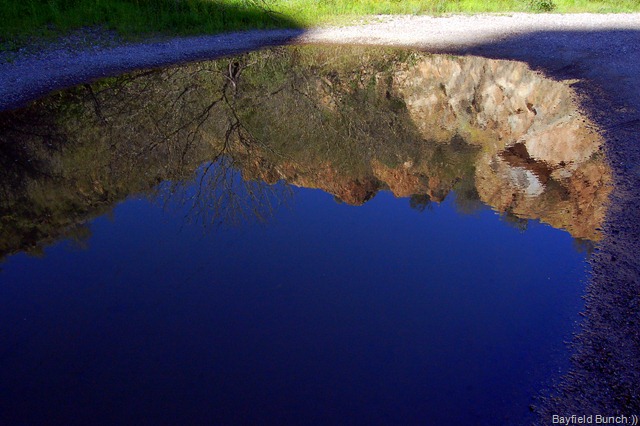 MOUNTAIN REFLECTION IN A WATER PUDDLE ALONGSIDE THE ROAD

Warm enough this morning to finally start a day with short sleeves.  Not a cloud in the sky & we were well on our way to another big & beautiful Arizona day. 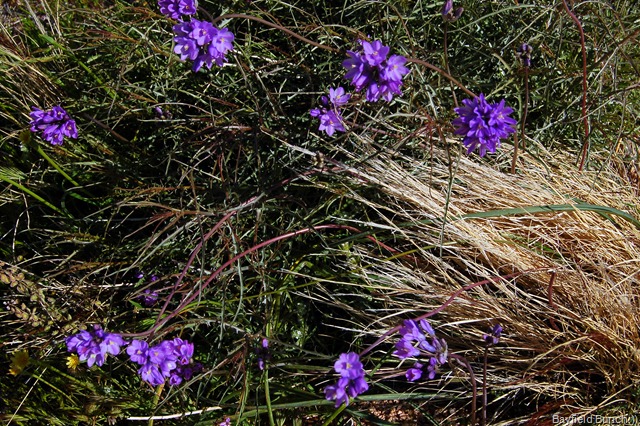 Rolled out of the Park at 8:45 A.M. & turned right onto the Apache Trail.  It has been named, 'Best Scenic Drive In Arizona.'  One of the first things I noticed right off the bat was the close proximity of many power lines along the road.  This presented a challenge for me the whole trip trying to take photos without power lines running through them.  Other than that, the scenery started out beautiful & just continued to get better. 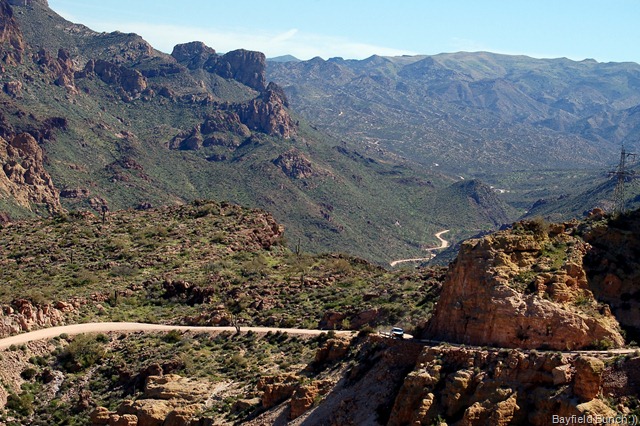 It was quite a surprise to see a large body of water suddenly appear out of the rugged mountain terrain of cactus & rocks.  CANYON LAKE was much bigger than I had figured & what a treat it was to see a large body of water again.   Canyon Lake shimmered in the morning sun with water smooth as glass.  A couple power boats skimmed over the water & as we crossed an iron bridge at the lakes south end we passed close to the lakes Marina.  Many small boats at anchor. 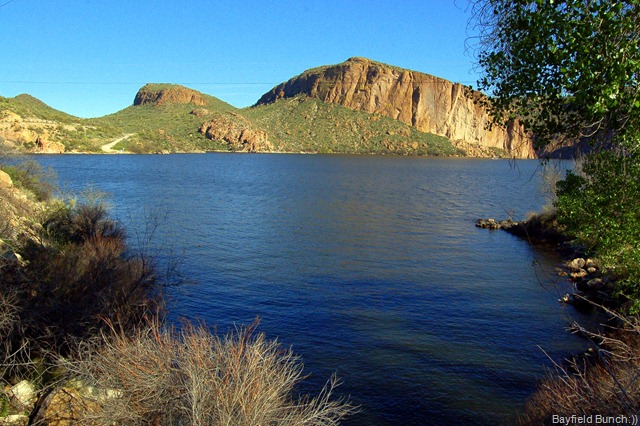 After Canyon Lake it didn't take us long to reach the historic little stop along the way called TORTILLA FLATS.  Not much of a town here but the Superstition Saloon is well known to folks far & wide.  The walls are lined with one dollar bills from thousands of people who have stopped in over the years.  The bar stools are actually horse saddles & the rustic decor enhances the cozy restaurant setting.  Kelly had a Burrito & I had a couple pancakes before departing. 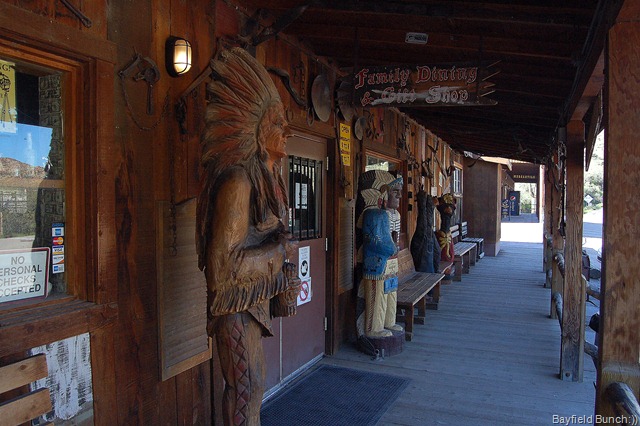 OUTSIDE THE SUPERSTITION SALOON IN TORTILLA FLATS

The Apache Trail heading east out of Tortilla Flats started off with a short & jostled water crossing before getting out of town.  A few miles later the pavement ended & it was a virtual bouncing & jarring dust storm behind us for the next 22 miles. 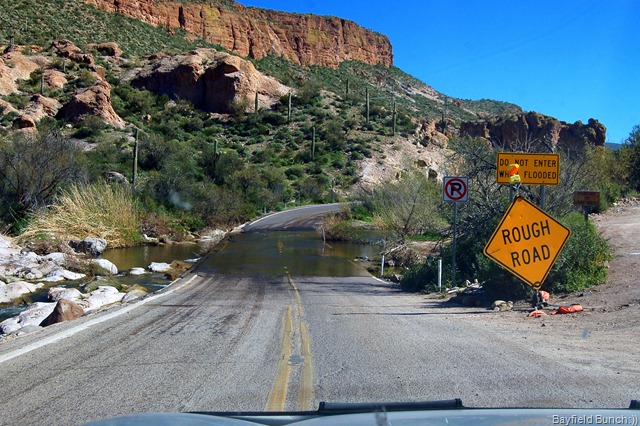 THIS SIGN SAYS IT ALL FOR THE JOURNEY AHEAD

FISH CREEK HILL is well known to traveler's for it's long steep grade descending 1500 feet in 3 miles to the distant valley floor below.  The narrow road is mainly hard packed sand with tight curves, especially at it's southern end before reaching the valley floor.  I'm sure side mirrors have been lost, paint jobs altered with varying degrees of desert pin striping.  If you don't want your vehicle to get dirty, shook up, or maybe scratched, I suggest you leave your precious little gem at home & go with somebody else who understands the ways of desert roads. 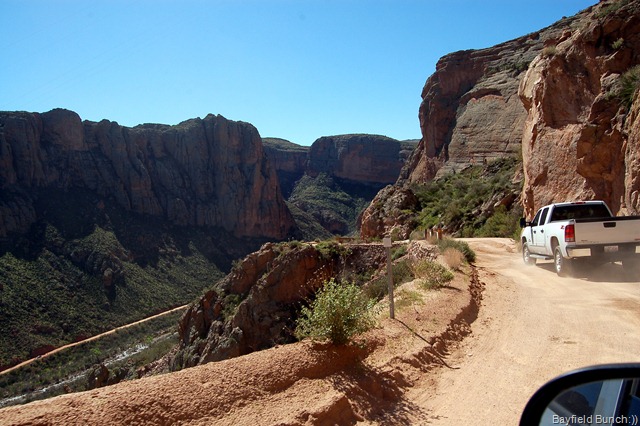 COMING DOWN THE FISH CREEK HILL....1RST GEAR PART OF THE WAY!!

The fish creek descent crosses fish creek on a tight hairpin left turn across a bridge at the beginning valley floor.  This is a good spot to stop & pry your white knuckles off the steering wheel.  You have successfully made it down the 1,500 foot descent.  Step out & take some pictures. 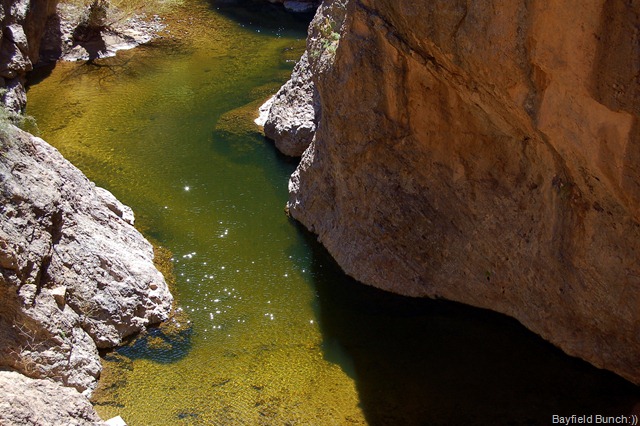 Next stop along the ever winding & ever dusty road for us were the many Saguaro Cactus along the left side of the trail sweeping for miles up to the base of the towering dome peaked mountains.  Probably the most Saguaro's we've seen in one concentration.  On the right side of the road runs the crystal clear waters of Fish Creek.  More photo opportunities but you will once again be frustrated by power lines when trying to frame the Saguaro's against the mountains.

A few miles further another large body of water appeared ahead below us off to the left between hills & mountains.  APACHE LAKE appears dark blue & is again frustrating to photograph because of telephone & power poles with their never ending miles upon miles of wires & cables. 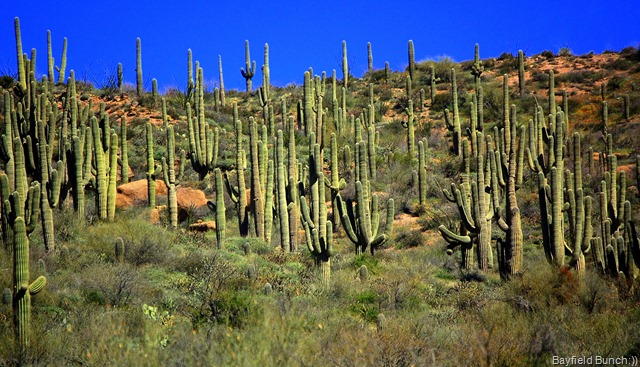 A THICK STAND OF SAGUARO CACTUS

The road is very washboardy along this stretch & the car was taking quite a pounding when we noticed an engine light appear on the dash.  There was no room to pull over & a quick check of the gauges told us there were no major problems & a quick look in the manual told us we were probably OK.  No smell of a hot engine or coolant.  We figured the jarring road had something to do with the light coming on.  We knew we were approaching the ROOSEVELT DAM area & figured we'd stop & check things over there. 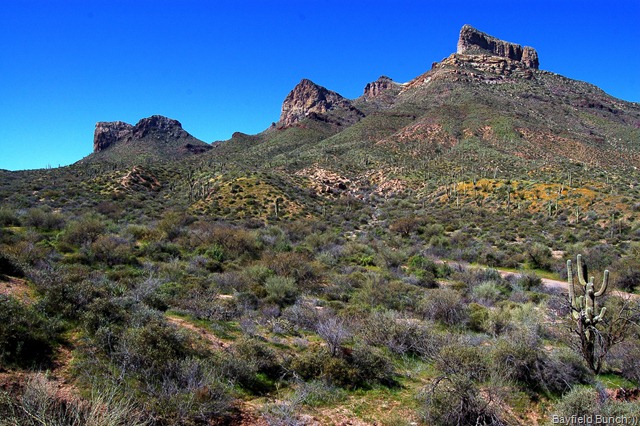 First clue to the dam coming up was the fast flowing river shadowing the road on our left side.  Saw a few boats & Marina signs & then around a corner there was the dam looming out of the rocks ahead of us.  Pulled into the parking lot & shut things down.  Walked out to a couple view points & watched the tons of water funneling out through the bottom of the dam.  Back at the car we checked all the fluids & everything appeared fine.  Continued on but a blue truck coming the other way flagged us down with the driver telling us to pull to the side of the road.  Two large trucks were coming the other way & needed all the room they could get. 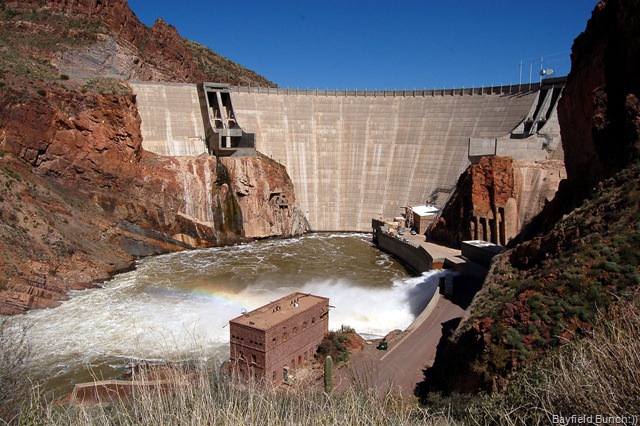 Once the trucks had passed, the road climbed up to the top of the dam & swung to the right through a large rock cut.  Laid out before us on our left was a large suspension bridge crossing Roosevelt Lake.  Another parking lot & another stop to admire the beautiful lake & it's large blue colored bridge called......... Roosevelt Bridge of course.

A quick drive across the bridge & back put us on the return route for Apache Junction.  Hung a right turn at Globe Arizona onto highway 60, drove through the scrappy little hard times town of Miami & ran right smack dab into the rear end of a long traffic jam.  Road Construction!!!!  Well, that cost us nearly an hour with the stop & go jam finally freeing itself up after a bunch of miles.  Cars were lined up behind us for as far as the eye could see.  Shook ourselves loose of the jam & had us a good run through the twisting mountain roads east of Superior Arizona.  West of Superior the highway turned into a four lane interstate type highway & we were able to put the hammer down & head into the home stretch for our Lost Dutchman Park. 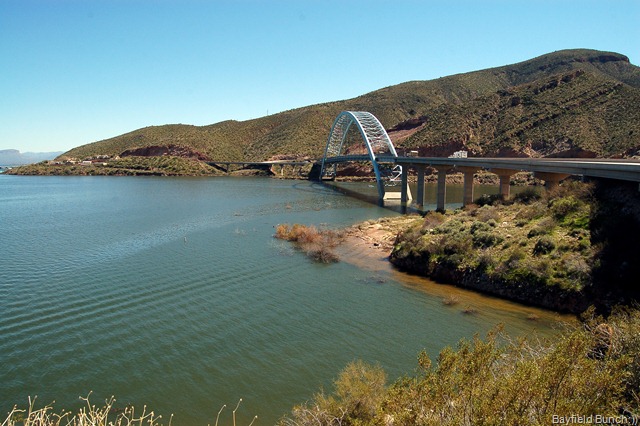 WE TOOK A SPIN OVER THE BRIDGE & BACK

From start to finish our trip on the Apache Trail had lasted exactly 7 hours.  We were soooooo glad to get home again.  I hauled myself out of the car, into the rig, & flopped my tired body into a chair.  The time was 3 P.M. & I woke up an hour & a half later feeling as if I had left a valve open somewhere & all my energy had drained out on the floor!!  But, all & all......what a great day we had & what a great drive that Apache Trail was.........10-4:))

A CLUSTER OF DESERT POPPY'S ALONG HIGHWAY 60

Now, some catch up...... Welcome to new blog followers, Susan Bidniak & JOHN A.K.A. SNAPSHOT.  Thanks for the interest in our travels folks & I hope we can keep things cooking enough to keep you interested. 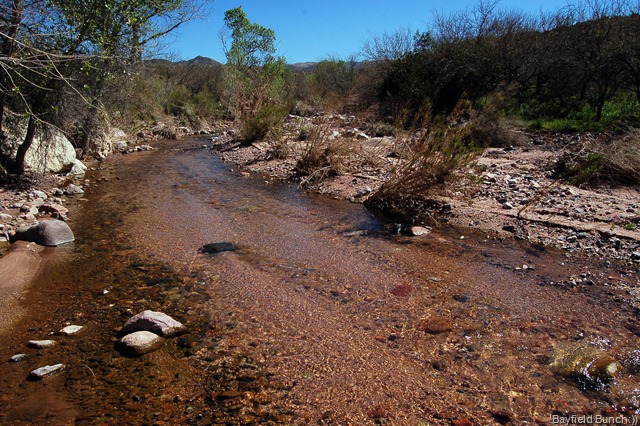 And Carol, Chris, Bob, & whole bunch of other folks.....hang in there guys I'm still trying to catch up on my email backlog.  And thanks once again to everyone for your your kind & encouraging comments.  I have them all saved:)) 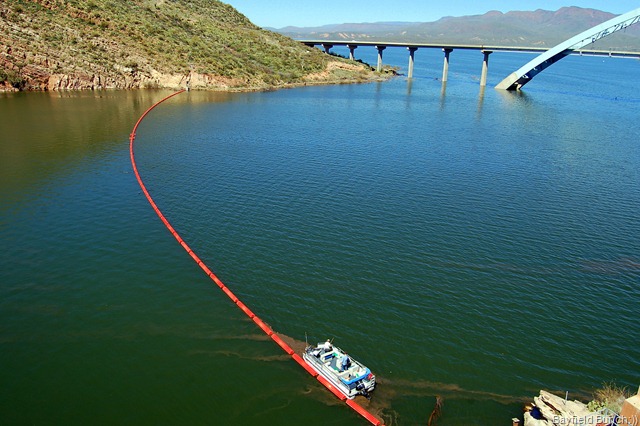 All of today's photos can be found here....APACHE TRAIL DRIVE

GROANER'S CORNER:((  A noted biologist, who had been studying little green frogs in a swamp, was stumped. The frog population, despite efforts at predator control, was declining at an alarming rate. A chemist at a nearby college came up with a solution: The frogs, due to a chemical change in the swamp water, simply couldn't stay coupled long enough to reproduce successfully. The chemist then brewed up a new adhesive to assist the frogs' togetherness, which included one part sodium. It seems the little green frogs needed some monosodium glue to mate.