WE INVITED SOME RV FRIENDS OVER TOMORROW....AND THEN WE MOVED:)) 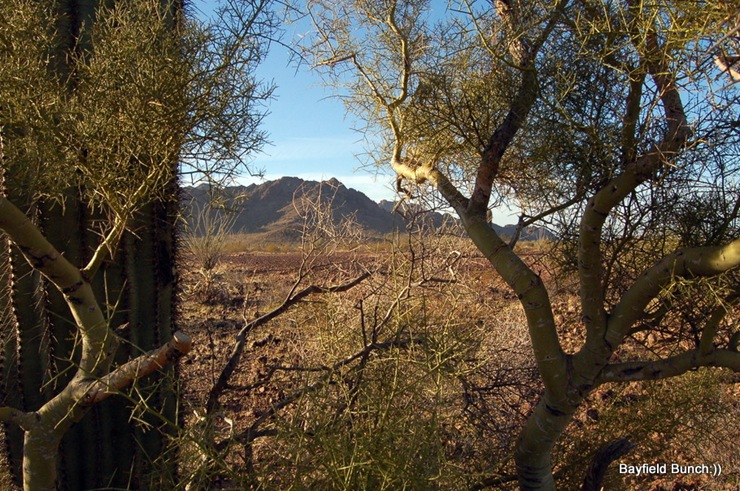 Yes, yes, after last night's fiasco with losing my post in Outlook Express I am now on Live Writer full time.....10-4:)) 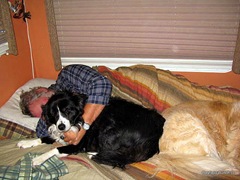 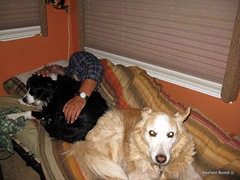 MOTORMOUSE WAS ON THE OTHER SIDE UNDER THE COVERS.    NO WONDER I DON'T SLEEP SO GOOD SOME NIGHTS.  YA JUST GOTTA LOVE YER PALS:))

Little did we know when we headed out on our walk at 8:30 this morning we would be moving the motorhome less than an hour later.  We set out walking in a southeasterly direction which took us across the site we had originally planned to camp on here.  Hmmmmmm.  Walked a little further to another site that had a better view of the Hidden Hills to our northeast.  Double hmmmmmm!!  Well, that did it & the discussions were on.  Should we stay where we were or move about 500 yards to this new site.  Back & forth, back & forth we went weighing all the pros & cons.  Took the best part of half  an hour & finally the decision was made.  Spent the rest of the morning moving:)) 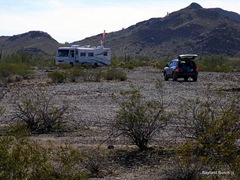 Sometimes you get a feel for a site & sometimes you don't.  One of the clues that a site is sitting well with us is if we begin setting things out like chairs, tables, mats, & especially ornaments & nick knacks.  Kelly busied herself right away hauling all that stuff out so I knew we were going to be happy with the site.  The furry guys loved it too, spending most of the morning exploring around the neighborhood. 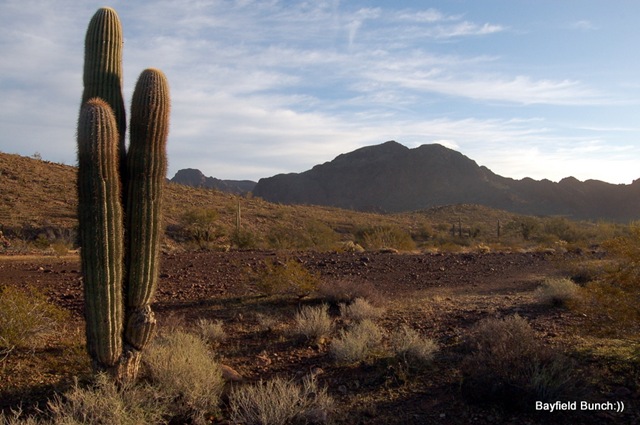 It was somewhere in the middle of the moving process when an idea peaked around the corner of a brain lobe & sent a shudder through me.  When I saw what it was I quickly ducked out of the way but it came right back & waved at me again.  Hmmmm, could this be a flash of the old AL I was seeing.  When the idea persisted I stopped, turned around, & stared the very idea square in the eye. 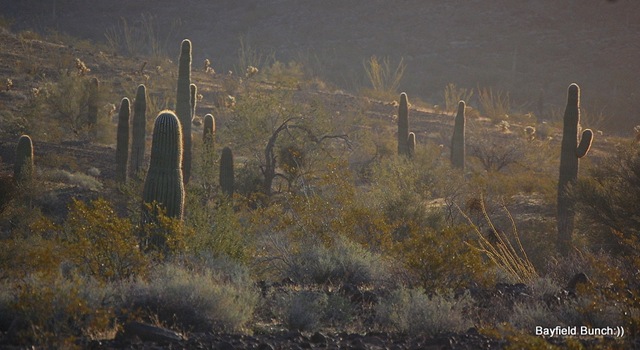 We had received 2 Facebook messages from RV friends this morning saying they were headed into the Quartzsite area today.  Both Rene & Jim from LIVE-WORK-DREAM http://www.liveworkdream.com/  & Herb & Bea another couple we first met at Hickiwan Trails 3 years were coincidentally both in Slab City.  They do not know each other.   Somehow my mind connected that with Froggi Donna & Stu from 2 TAKING A FIFTH  http://2takinga5th.blogspot.com/ staying in Yuma at the moment.  The idea picked up a bit of speed when I thought of Motty & Patty from TRAVELING LIVING JOURNEY http://travelivingjourney.blogspot.com/ in an RV Park in Blyth California just over the State line on the Colorado River.  Peter & Patty were right in Quartzsite itself with Janna & Mike from TINTEEPEE http://tinteepeelogcabin.blogspot.com/ up in Bouse.  Jim & Elli  from JUSTRAVELIN http://justravelin.blogspot.com/ were also boondocked with Janna & Mike.   My geography brain kicked in drawing me up a mind map of all their locations in relation to where we were.  'Presto' the idea caught fire & launched.  All those locations were within an hour's drive of our location in the Castle Dome Mountains.            (the links feature is not working in my Live Writer) 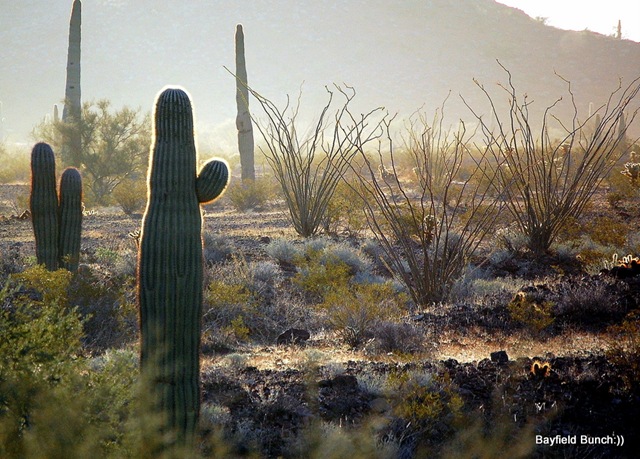 Walked over to the motorhome & flew the idea by Kelly.  Needless to say there was a bit of shock but she quickly recovered & climbed on board with the idea.  Minutes later I was seated at the computer tapping out some Facebook messages & emails.  One of the first Facebook comments I received came from Florida with Doug from LIVING OUR DREAM http://www.mytripjournal.com/ourdream saying....."Al, you are talking about socializing with People. Are you OK?"   Doug.  Well, Doug had a real darn good point there so I felt I owed him an explanation & messaged back...."Fell off a 300 foot cliff landing right on my pointy little head this morning Doug & the first thought I had when coming too was.....'Hey, let's have some people over:))"  Well, it was the most logical reason I could think of at the time!! 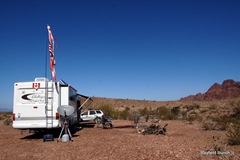 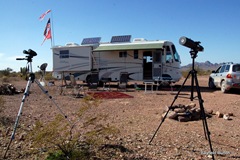 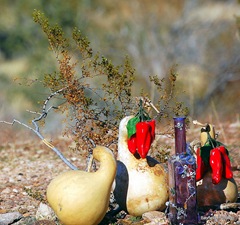 Rest of the sunny 68F day was spent setting things up, napping, checking the puter for messages , doggy snuggles, & just some good old fashioned relaxing.  At the moment Kelly is watching the Olympic opening ceremonies & I'm sneaking an occasional peak.  Well actually it has become more than a sneak peak now that all the countries have been introduced.  What a hugely fantastic job they have done with that opening show & I have not typed a thing in this blog since it started.  The special effects, set designs, electronic lighting, performers & countless behind the scenes people, are far better than the whole movie Avatar ever was!!  All the people involved in this opening show ceremony deserve their own Olympic medal for their superb efforts.   Bravo Canada on a performance exceptionally well done:))))))))))))))))) 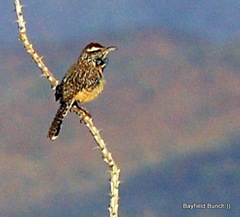 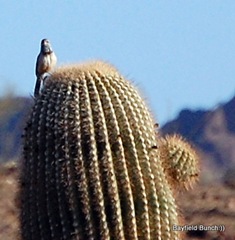 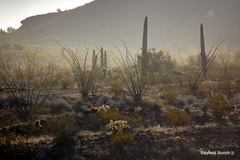 Ok, this is where it stands for tomorrow regarding the folks that are coming over.  We are about half way between Yuma & Quartzsite.  Across from a place called Stone Cabin a road runs into the desert called, King Valley Road.  We are about a mile down that road on the left.  So far there is only a fifth wheeler parked between us & the highway.  We will have our flags flying & our GPS co-ordinates are......N 33' 15.1470 by W 114'13.3088.  Elevation 1,594 feet.  Well, those are the numbers Kelly gave me anyway.  Haven't heard back from Bea & Herb but Rene & Jim are bogged down at the Slabs with solar problems.  As far as we know, the rest of the gang will be here sometime after lunch. 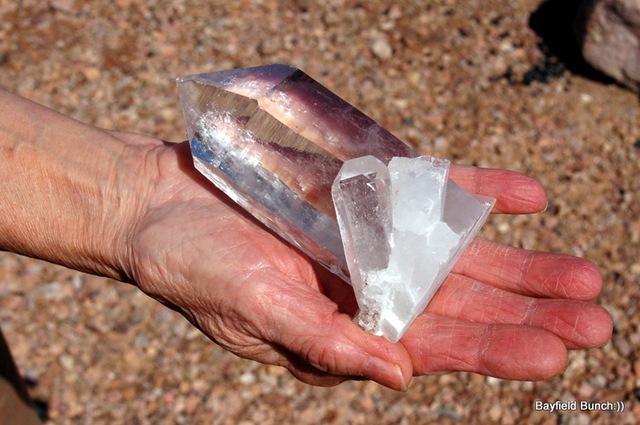 COULD THIS CRYSTAL REALLY BE FROM CRYSTAL HILL.....Hmmmm:))

And welcome to our 97th follower, Rob68.  I think he might have an interest in UFO's just as I do:))  Oh, & by the way, did I mention the all expense paid trip around the world for our soon to be 100th follower.  Ok, Ok, so it was just another crazy thought in my head after I came too following the 3000 foot cliff fall this morning, or was that a 300 foot fall, or was it not a fall at all.......just a momentary lapse of Cursmudgeonism:)) 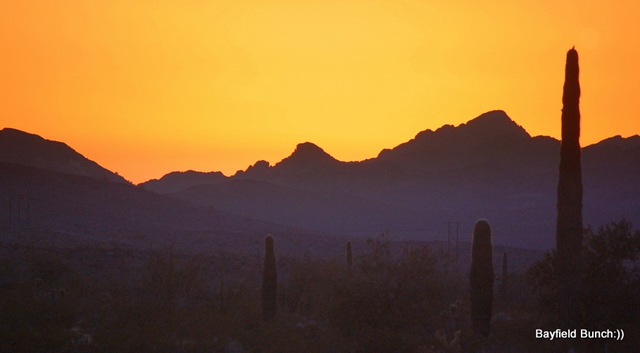 GROANER'S CORNER:((  You may be getting old if everything hurts , and what doesn't hurt, doesn't work anyway.