A LITTLE MAGIC IN THE KOFA MOUNTAINS 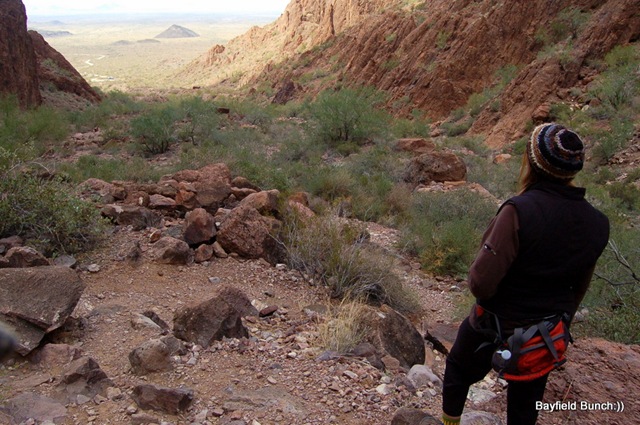 Spent the morning doing one of my absolute all time favorite things.  Walking quietly along a beautiful mountain trail.  We had heard the Palm Canyon Road south of Quartzite led into the Kofa mountains where a short uphill half mile rock scramble brought one to a narrow canyon high up on a rock faced wall.  In that barely accessible canyon were reported to be about 40 palm trees. 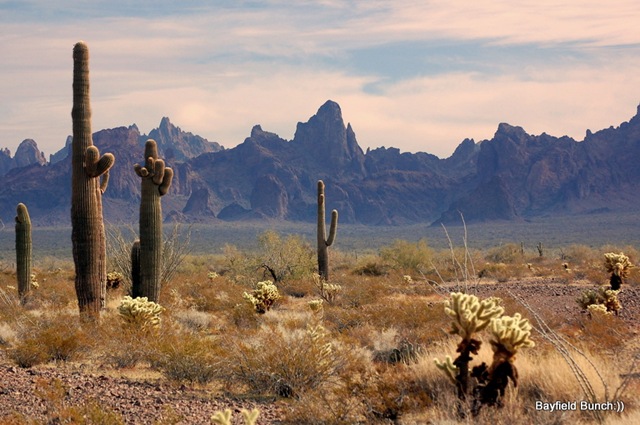 SAGUARO’S STAND IN SILENT SALUTE TO THE DISTANT KOFA MOUNTAINS

First of all though I had better get my mountains straightened out.  A few days ago I called the hauntingly beautiful jagged Kofa mountains, the Castle Domes.  That was wrong.  The Castle Dome range is further south along the highway towards Yuma.  I have taken photos of the Kofa mountains every time we have been to Quartzite but this morning was the first time we ever went to the Kofa's & actually drove right up to them, touched them, and hiked right into them.

THE DESERT FLOOR FLORA CHANGES AS WE GAIN ALTITUDE

We left our campsite around 9:30 after another nice desert walk this morning.  The turnoff for Palm Canyon road was about a 20 minute drive south of us.  Left turned off highway 95 & headed east on the gravel & slightly washboardy road.  Hazy mountains loomed closer as the Saguaro cactus became more numerous & the rocky landscape began filling with prickly cholla plants.  The rugged Kofa mountains were absolutely majestic in the morning sun as we followed a winding road right up to the face of the mountains themselves.  A parking lot marked the end of motorized traffic & from there it was boots on the ground for the climb to the palms. 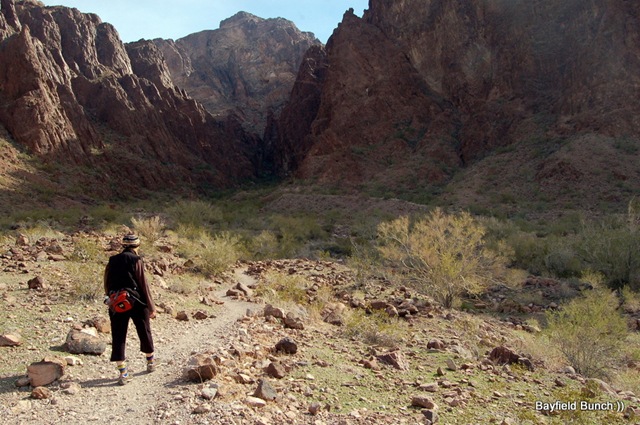 HEADING UP THE TRAIL IN SEARCH OF THE PALMS

I enjoy driving through scenic places but to actually get out & physically hike into those scenic places has got to be one of the greatest things.  I cannot put into words the feelings I have when heading up a rocky mountain trail with towering & shadowy rock formations all around.  Blue skies high above with Saguaro cactus, Palo Verde trees, & greenery along the trail.  Cactus wren calls echoing from the canyon walls with the occasional eagle overhead.  There are bighorn sheep in these mountains………& there is quiet.  Not a sound.  A whisper is almost an intrusion into these serene surroundings & it is one of the reasons we prefer not to hike with others or in a group.  It is the peacefulness of nature that we seek on these hikes.  It is the beauty I try to connect with in my camera lens.  I can't do that when surrounded by talking & distracting people. 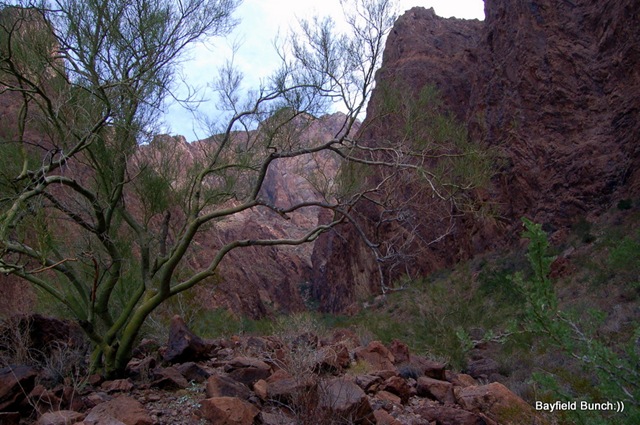 We walked & clambered our way along the narrow rock strewn pathway leading ever upwards into the narrow dark canyon stopping for photos & to marvel at the wonderment all around us.  At one point Kelly mentioned that it was like walking in a Harry Potter movie.  Any moment we expected to round a corner & there in the distance high atop a distant slightly cloud shrouded bluff....Hogwarts itself. 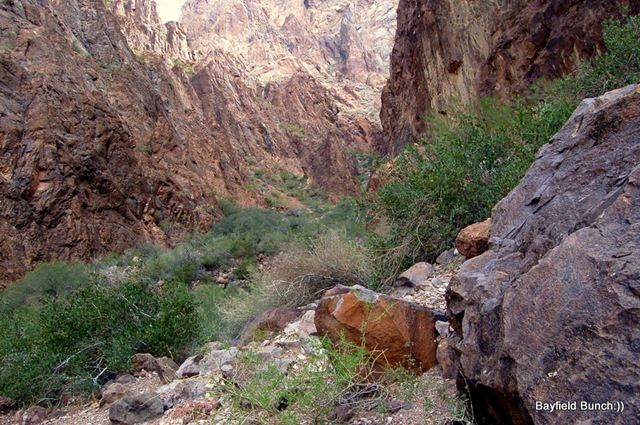 THE TRAIL ENDED JUST BEYOND THIS POINT

I saw the small wooden sign before I saw the palms.  The sign simply said 'Palms' with an arrow pointing slightly upward.  High on the other side of the close canyon wall was a long narrow vertical canyon in itself & in it were the palm trees in a long single line.  Had the sign not been there we would have walked right by without ever seeing them.  We briefly contemplated the rugged hike down, across a boulder strewn wash, & then up a steep 200 foot climb to the palms themselves but considering our limitations decided against it.  I still think I could do it ok though.  We silently sat here on the rocks for awhile, each lost in our own thoughts.  We soaked up the magnificence & tranquility of our surroundings..........and then we heard voices!! 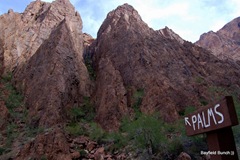 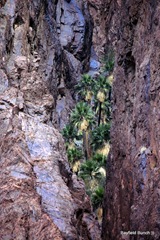 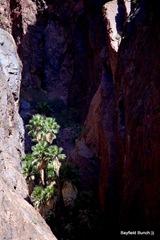 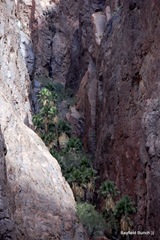 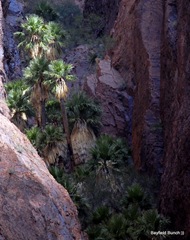 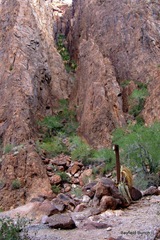 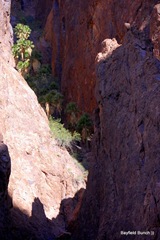 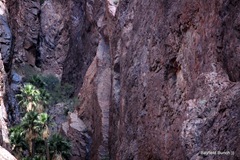 Some folks from Washington State came on up the trail from the parking lot & stopped to admire the palms.   We all had ourselves a little bit of a chin wag before Kelly & I started back down the rocky trail.  As mentioned before, descending a trail is generally always harder than going up.  Especially hard on aging knees.  We stopped a few times on the way down trying to figure out if our new Delorme GPS system actually knew where it was but we obviously have not made it to first base yet in understanding how this little techno wizard of a gizmo works. 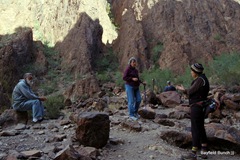 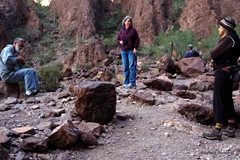 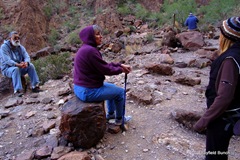 We were back to the rig around 2 & I spent a big part of what was left of the day just kind of dozing off here & there from all that great exercise this morning.  Wished we would do more of that sort of thing.  Great for not only the body but for the mind as well.  I sometimes feel we waste way to much of our southwest time doing too darn much of nothing.  Too much nothing stuff & not enough nature stuff!!  Too much time in the people world & not enough time in Mother Nature's world.  Some people are most comfortable being around other people.  I am most comfortable being where I was this morning................10-4!! 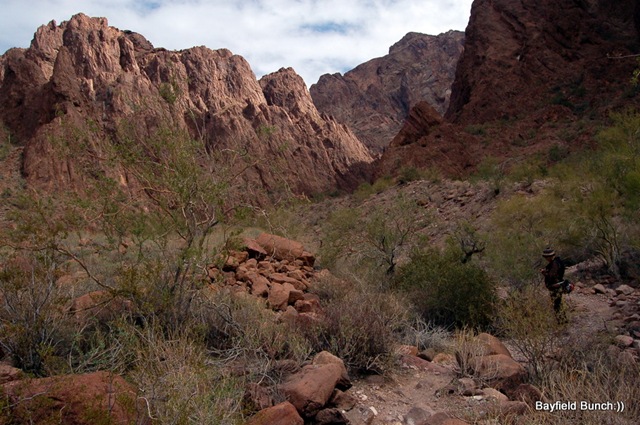 STOPPING TO CHECK THE DELORME GPS

I have too many photos to put in the blog tonight so I will have to make a special effort & put this morning's hike into a web album & I plan to have that album online by tomorrow night.  Wish me luck................ 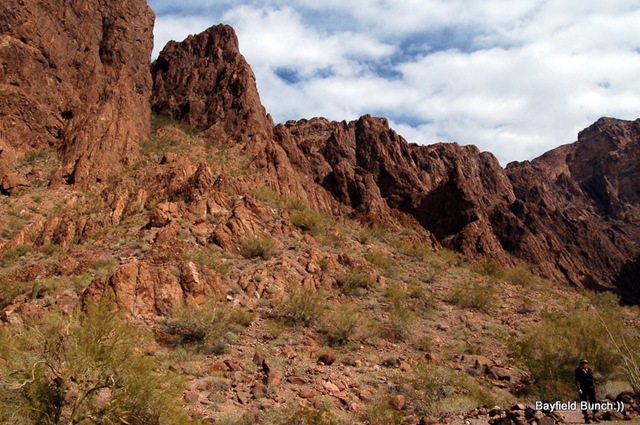 KELLY IS DWARFED BY THE MIGHTY KOFA MOUNTAINS

GROANER'S CORNER:((  The only time the world beats a path to your door is if you're in the bathroom!!