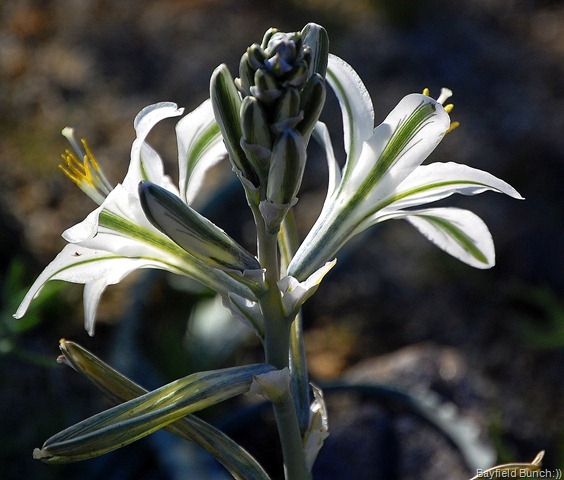 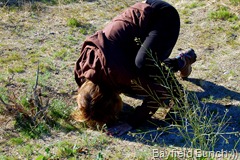 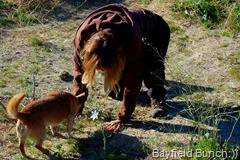 WHAT THE HECK IS KELLY DOING.......SMELLING A DESERT LILY OF COURSE

Sunny but cool this morning as we saw Wandering Willy speed by on his 40 minute morning walk.  Tried to get a picture of him but there was just a trail of desert dust as he speeded up & over Coyote Mountain to our west.  I did catch the red jacketed road runner on his way back though. 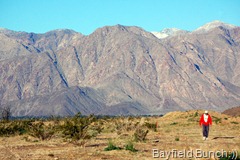 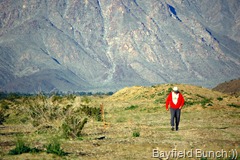 IT'S THE HAPPY WANDERER HIMSELF.....WANDERING WILLY:))

Wandering Willy (Bill) & I sat outside in lawn chairs for the whole morning discussing the price of tea in China, the economic downturn in outer Mongolia, & the flamboyant life of the South African Tse Tse fly.  Between those subjects we touched on satellite dishes, blogs, fellow bloggers, RVing in general, travel routes, & favorite places to stay.  About noon Kelly said something about a hockey game & I noticed the whole world seemed to stop.  It was like the planet's population disappeared into their television sets.  I wondered if maybe they were playing a rerun of the last hockey game I watched when Johnny Bower was in the net for the Toronto Maple Leafs & Jacques Plante was in goal for the Montreal Canadians at the other end.  Now them's was the days of good hockey!! 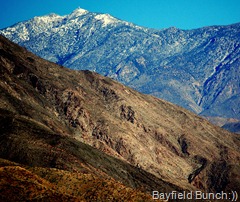 SNOW ON THE MOUNTAIN TOPS THIS MORNING

Sometimes on our hikes we get into some rock scrambly areas where footing is not the best & it's easy to take a tumble.  I have noticed some folks using walking sticks to help them along with their steady balance.  I'm usually carrying camera gear so for me a stick just gets in the way.  Kelly sometimes has some balancing problems & has been considering getting a walking stick.  I just thought a stick was just a stick until I read BARNEY'S post a few months back.  I saved it & had intended to include it in the blog but kept forgetting to put it in.  I thought of it last night & today so here it is.  An informative post about the importance of having a proper WALKING STICK. 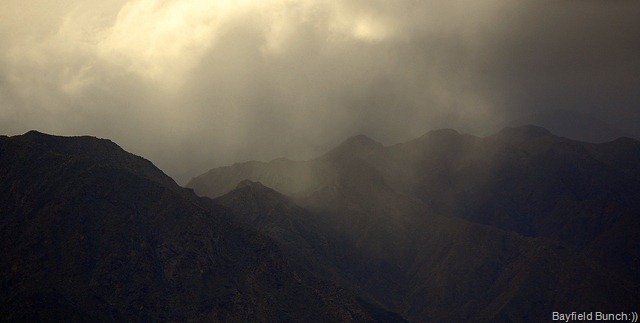 For the most part I really like our new Toshiba laptops but there are a couple things I wished they would have left alone.  Our old Toshy has an easily accessible wheel to turn for volume control.  The new one has a + & - sign to press for doing that but I prefer the wheel.  Because of the number pad on the right the keyboard is shifted to the left so I've always got my arm placement & fingers wrong.  I liked the bigger & solider start button on the old one too.  And this new Toshiba has such a smooth shiny finish that not even a fly could land on it without skidding right off the end of the runway.  It shows every fingerprint from here to Swahili land.  Says it has harman/kardon speakers but it still spells tin can sound in my books.  Other than those few little gripes, I really like it.  And besides, it wouldn't be right if I didn't have a gripe about something would it.

Kelly finally jumped through & over all the hoops & barrels re-installing Winamp.  She then successfully transferred all the music files for the second time between the two laptops so now I have all my music files again.  Transferring all our Outlook Express address's to Windows Live Mail has proved to be a separate monster all of itself!!  I had a big accomplishment day as well.  I picked up some small stones around the rig & combed my hair. 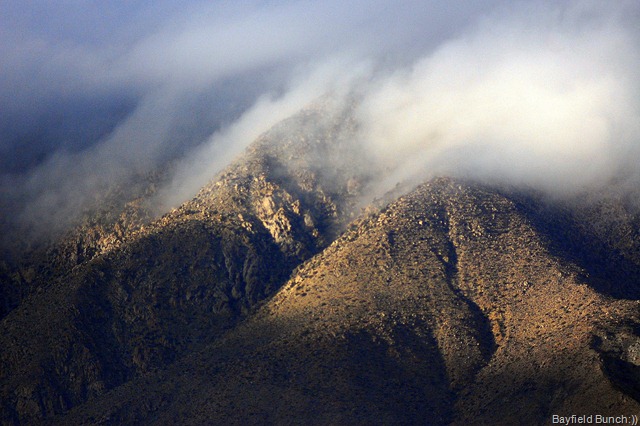 Will check tomorrow at the Anza Borrego visitor's center for their March brochure of events.  Would really like to take one of their guided tours of Ghost Mountain if they are having any more.  Really wanted to get in on some of the Astronomy night classes but I think they may be over until the fall.

INSIDE THE SAN YSIDRO MOUNTAINS (200mm)

Had my Atlas out again this afternoon trying to decide where we are going once we leave here whenever that is.  Borrego Springs will probably be our furthest point west this trip so when we leave here it will be the start of our long slow trek northeast towards home.  I imagine we will be somewhere in eastern California or northeastern Arizona next month about this time.  All depends on weather up in that neck of the woods. 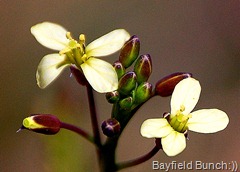 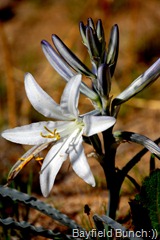 I was sitting outside in a lawn chair with the computer on my lap this afternoon when I heard the simultaneous "Yaaaaay" from both WW's rig & ours.  The hockey game was over & Canada had won:))  Bill (WW) & I sat outside chatting for the rest of the afternoon & I'm sure that is the longest I have talked to one single person in many many months.  Truly a nice fellow & we will miss him when he rolls out early in the morning.

I did upload 2 new Picasa Web Albums today with more photos from the last couple of days.

CHRISTMAS CIRCLE PLUS THE OREGON GUYS VISIT THE MOTORMOUSE 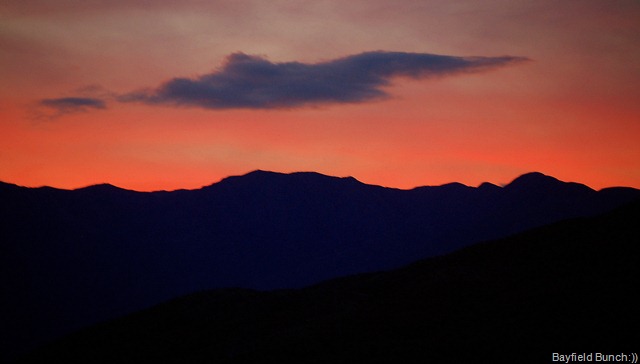 GROANER'S CORNER:((  As migration approached, two elderly vultures doubted they could make the trip south, so they decided to go by airplane.
When they checked their baggage, the attendant noticed that they were carrying two dead raccoons. "Do you wish to check the raccoons through as luggage?" she asked.
"No, thanks," replied the vultures. "They're carrion."