STICKY BUNNED AT THE BBC IN BISBEE:))

It's 3:15 a.m. Sunday morning & as usual I woke up early so figured I'd take another crack at re-writing Saturday night's blog.  When the computer seized up last night a combination of failed back-up errors on my part led to me losing the whole blog. 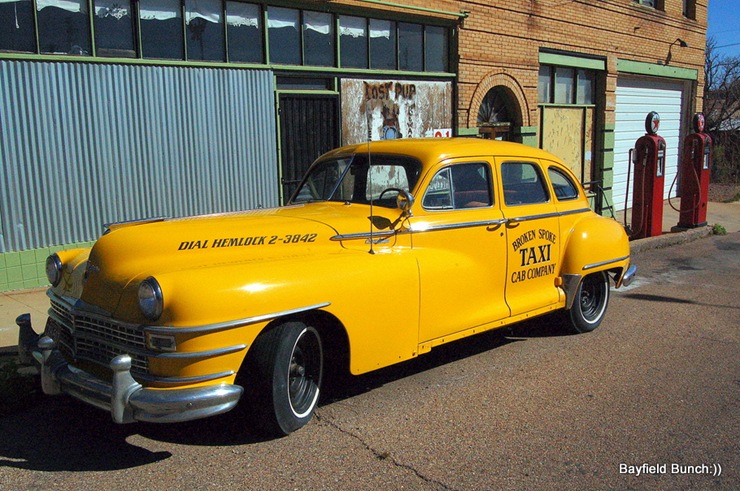 OLD ERIE STREET JUST DOWN FROM THE BBC

At this time of year the nights can be very cold here in the high desert region of southeastern Arizona.  Thermometer this morning read 27F again when we got up around 6.  By the time I'm out the door around 7 to unlock the gate, feed the chickens, one cat, & two dogs, it sure hasn't warmed up any & I'm glad to get back to the warmth of the rig.  I would say the cold night's are the biggest downfall of the southwestern high desert regions.  I think we are somewhere around the 4,000 foot elevation mark here & in the southwest temperatures are governed by elevation. 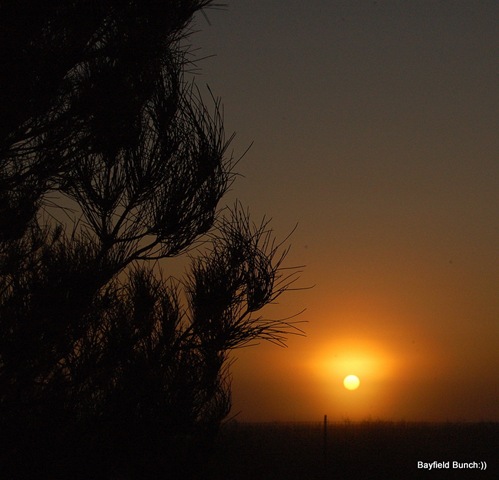 ANOTHER GORGEOUS SUNRISE AT THE RANCH

We were getting a bit low on groceries so right after our dog walk around 9 this morning we headed off for the little alpine like town of  Bisbee Arizona nestled in the Mule Mountains about 25 minutes southwest of the ranch.  First stop was the farmer's market located in Warren which is now a part of overall Bisbee.  Hadn't been to that market before so just wanted to mainly have a look at it.  Didn't buy anything but I did manage to candidly photograph some of the locals who frequent the market.  I will add those people pics to an upcoming blog shortly along with other characters I photographed in & around Bisbee itself. 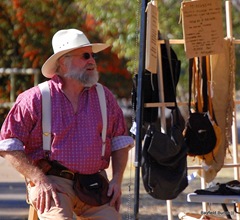 AT THE FARMER’S MARKET

It's a short drive from Warren over to the BBC (BISBEE BREAKFAST CLUB) on old Erie Street about a half mile south of historic downtown Bisbee itself.  As usual there were lots of people there & we were fortunate enough to get a table for two right by a big window at the entrance.  Kelly ordered up a big plate of something called Santa Fe Shrimp & I had my usual glass of water with a swatch of grass & a side order of parsley sprigs.....ya right!!  The BBC is well known for it's cinnamon sticky buns which it only makes & serves on the week-ends.  Kelly figured we should try one so we ordered a single sticky bun to split between us.  When that heated thing landed on our table dripping with melted butter I knew we were in big trouble.  This bun must have had a ka-zillion million calories in it because it just looked soooooooo good.  In anticipation of the yumminess we were about to consume I tried to take a picture of it but blurred the photo.  I think it was my happy tummy that made my hand shake.  No doubt this was probably the best sticky bun we've ever had & for that reason we most likely will not be having another one.  It was just too good & could become habit forming in an instant & I certainly do not need any more bad eating habits!! 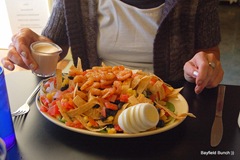 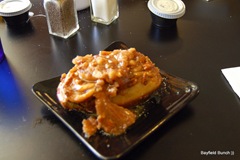 I have blogged about the BBC & the street it's located on before.  We were here a week or so ago & also frequented the area back in February & March this year.  If you type BBC or Bisbee into the search box to the right of this post you can probably find those blogs plus there are photo albums for those days as well.  This old street is very photographic so once again after we ate I headed on down the sidewalk for a few more photos of the permanent yellow Chevy taxi that sits by the curb.  Noticed they have added a couple of old gas pumps behind the car as well. 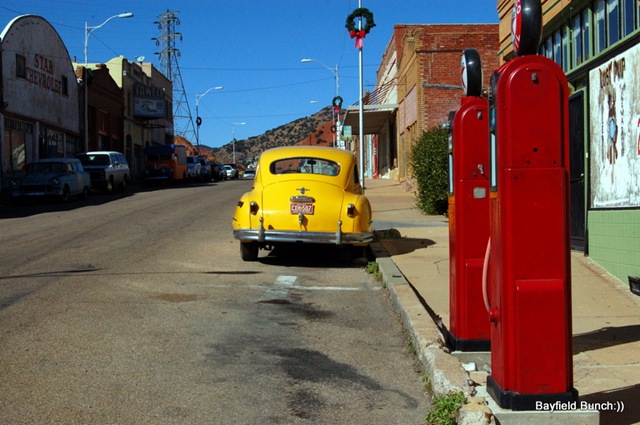 GAS PUMPS HAVE BEEN INSTALLED SINCE LAST MARCH

The heart & main downtown section of Bisbee itself is located about a half mile from the BBC on the other side of the large open Lavender pit mine on the south side of the highway.  We rolled into the historic downtown & followed the narrow turning main street toward the north end of town where we made a sharp right hand hairpin turn onto a very narrow street heading up a very steep hill.  We were familiar with this part of town having driven through it before coming the other way.  Once you get off the main street & up the hillsides into the living part of Bisbee it is hard to call them streets anymore.  More like alleyways snaking around sharp corners & steep grades.  A lot of these tiny roads dead end & you have to back up & wiggle your way around a bit to get rolling again.  It's all part of the enjoyment & experience of Bisbee:))  Many of the roads are only wide enough for one vehicle & even then you have to keep your eyes open for porch's, sides of buildings, somebody walking, kid's playing, stone walls, iron gates, & countless stone stairways.  No matter how many times we come to Bisbee it is always a new experience for us & new treasures & surprises to be found.  The colors & architecture here are amazing not to mention the art of landscape living on the sides of what seem impossible hills & grades.  Man's ingenuity years ago is apparent in the many retaining walls, tightly packed houses, & how cleverly the thousands of stone steps inter-connect the whole mountain goat like terrain.  No fat folks living here that's for sure. 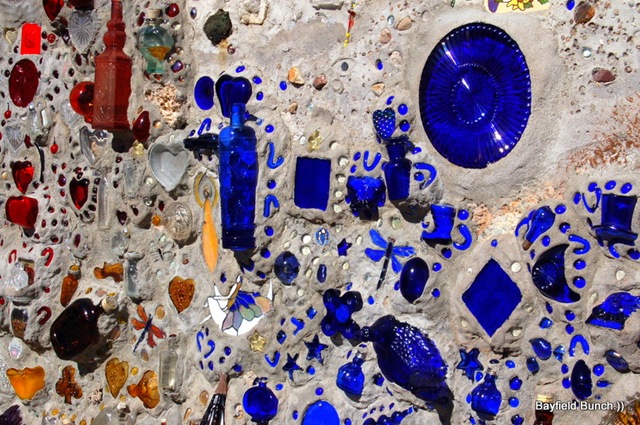 If you come to Bisbee & drive by it or through it you will not experience the true Bisbee itself.  For that you have to get out & walk, you have to climb the stairs & walk or drive the higher narrow roads.  You have to get up into the hillside above the main street below.  At times you are only a few feet from the highest sections of rooftops as you look across the town to the mountains beyond.  No, you cannot just drive into Bisbee, park your car, browse a few shops, & then leave again saying you have seen Bisbee.  You have seen nothing!!  If you come to Bisbee be prepared to spend many enjoyable hours here.  Yes, you might get a little dust on your shoes but you will see great old buildings, colorful characters, old hippies, young yuppies, cowboys, old clunker cars, BMW's, Jaguars, bikers, art galleries, painters, minstrels, sculptors, hippy vans, & maybe a few folks wearing guns.  Saw a guy with a gun & holster in the BBC last March & yes the gun was real.  Don't see that kind of thing in Canada that's for sure. 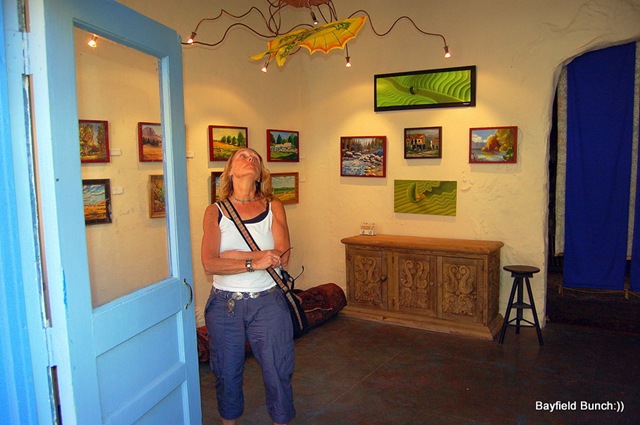 CHECKING OUT AN ARTSY STORE

Bisbee is an old mining town right out of the rootin tootin pages of the wild west.  A walk up Brewery Gulch takes you back to a time in the late 1800's when hotels, bars, saloons, & brothels lined the streets.  Not hard to imagine the late night brawls & gunfights that took place here.  The street & buildings are pretty much as they were back at the turn of the century & the town is not commercialized like some other popular western towns.  It's just kind of a folksy atmosphere with real people doing real every day things. 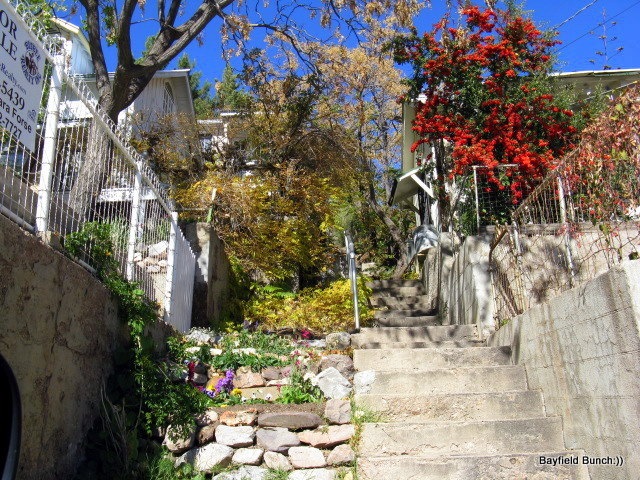 JUST A FRACTION OF THE TOWN ABOVE THE TOWN

Oh, & I should warn anyone thinking of coming to Bisbee for a visit.  There are no Wal-Marts or big box stores here, no vast parking lots leading to mindless shopping malls, no hoity toity big high end stores & no fancy schmancy over priced restaurants to feel uncomfortable in.  Like I said, it's a folksy/artsy kind of place so bring your camera, your sense of adventure, leave your attitude at home & enjoy the experience & beauty of Bisbee. 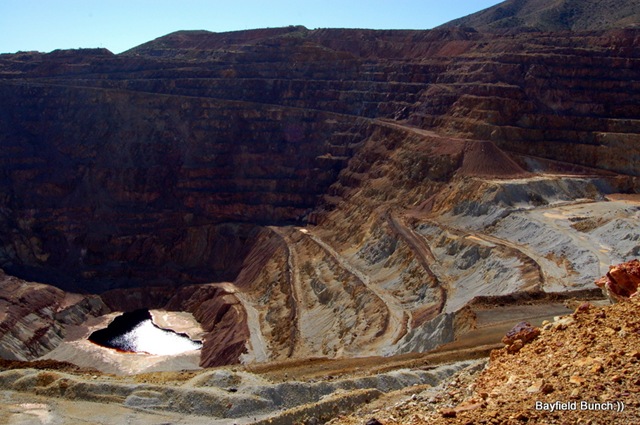 Our last stop for the day was my favorite little grocery store in Bisbee's San Jose section.  Kelly slipped into the store while I stayed in the car & rested my legs.  I did pop in for a burnt tasting Charbuck's coffee to go though.  I always think of you Doug when I'm occasionally forced to have a Charbucks because I remember you telling me how awful you thought our Canadian Tim Horton's coffee was & about the time you threw one across a parking lot.  Oh well, we are all a bunch of different characters aren't we:)) 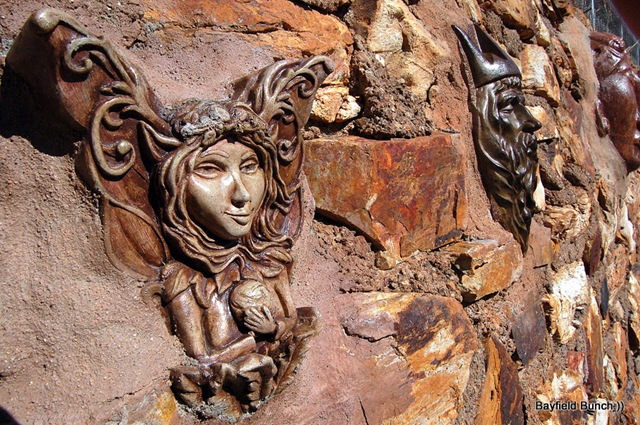 THE WALL OF MANY FACES

We were back to the ranch about 3 & I was in my chair & sound asleep by 3:01.  To-morrow we're heading out again but not sure where we are going.  Have a couple options up our sleeves but will decide in the morning. 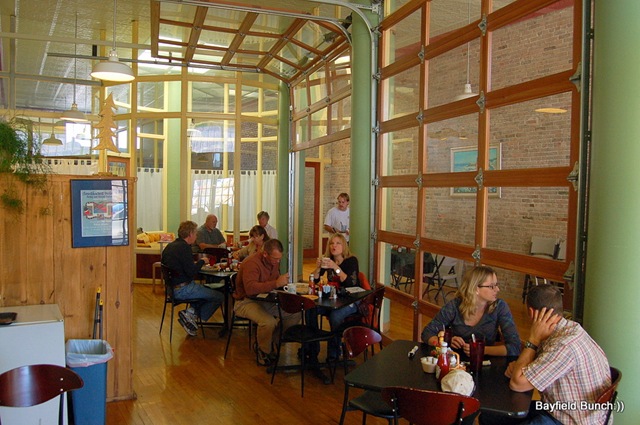 ONE OF TWO SECTIONS AT THE BISBEE BREAKFAST CLUB

I'm not going to try & cram all of to-day's photos into the blog but will theme them in over the next bunch of days or so.  Might also upload a separate Bisbee album to Picasa Web Albums as well.  Hadn't intended on taking so many pictures to-day but whenever we go to Bisbee I never come away from there with empty cameras!!  It's a good thing those old 35mm film days are long gone or I'd need a full time job just to buy film.  It's after 5 a.m. now so just about time to go back to bed & get up again.........oh dear:(( 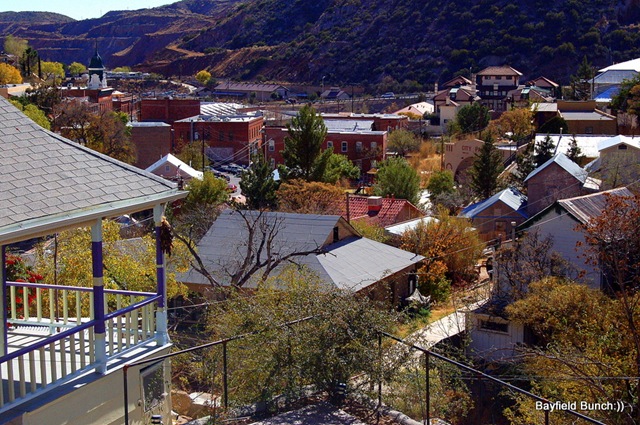 OVERLOOKING THE TOWN……JUST ONE OF MANY GREAT VIEWS

The only thing better than right now will someday be the memories of right now....AL