WE WILL SOON BE HEADING BACK TO THE ARIZONA RANCH FOR AWHILE:)) 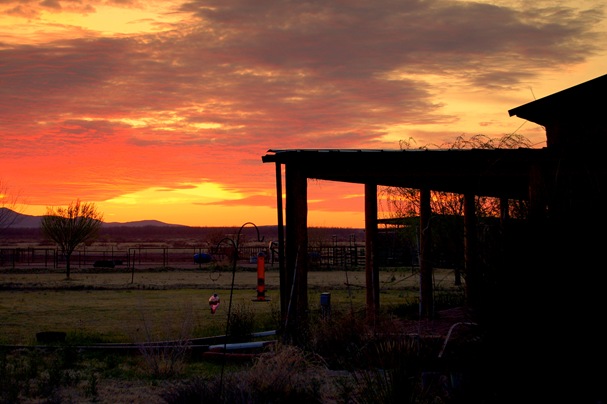 SUNSET AT THE RANCH HOUSE....March 09

(All of to-day's photos were taken last winter)

In last night's blog I paired up a wrong link with a correct photo.  I have since changed that & the correct link for our rig with the wheels in the ditch can be found HERE .  Thanks for spotting that Jerry:)) 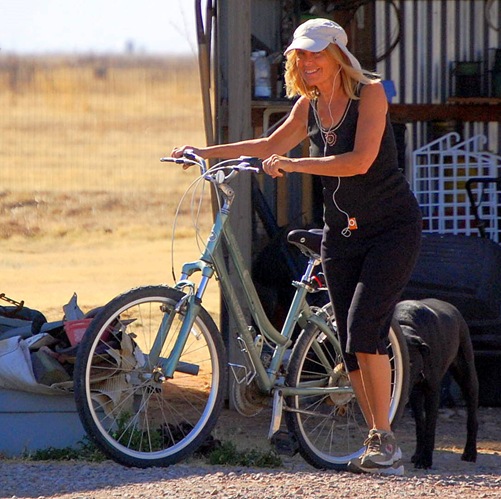 KELLY HEADS OUT FOR A BIKE RIDE AT THE RANCH

In less than a week we will heading back to the ranch in Arizona where we spent 7 weeks last winter looking after a few critters for some friends.    We had never met Jeanie & Ray, owners of the ranch until they stopped into our boondocking site near Tombstone Az one day.  But, the actually story of how that meeting came about begins a couple of months before that & is a good example of......... you never know who's reading your blog:)) 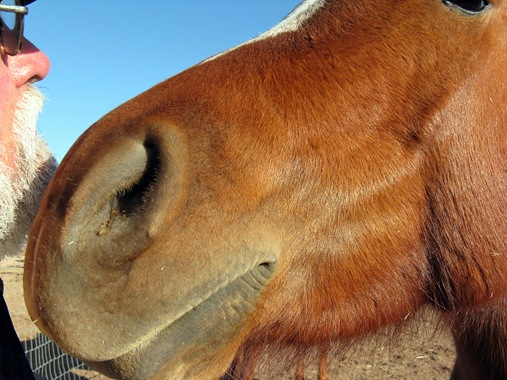 We were boondocking for awhile in the California desert on Ogilbe Road about 10 miles west of Yuma in December of 08.  One day an email came in from another RV couple who said they had been following our blog, were presently camped east of Yuma, & would we like to get to-gether for a visit.  Those people turned out to be Doug, Joanne, & their standard poodle  Fillmore from LIVING OUR DREAM.    We met on a Saturday morning at McDonald's in one of Yuma's Wal-Marts.  About half way through our conversation Joanne asked if we might be interested in a ranch sitting job for some friends of theirs.  Well, that immediately conjured up herds of charging cattle, cowboys on wild bucking broncos, buffalo from horizon to horizon, blazing saddles, city slickers, & legends of Curly's gold.  Very scary stuff to say the least so over a Big Mac & fries we said we would definitely think it over. 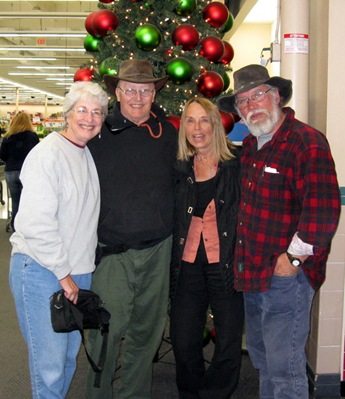 JOANNE, DOUG, KELLY, & AL , OUTSIDE McDONALDS IN THE WAL-MART STORE...YUMA 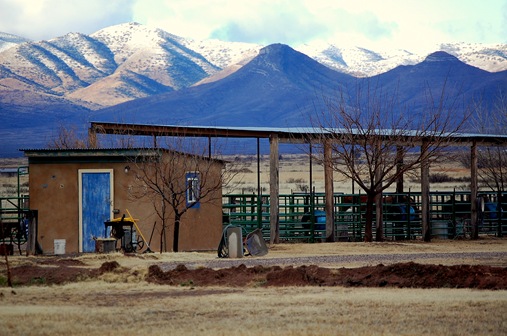 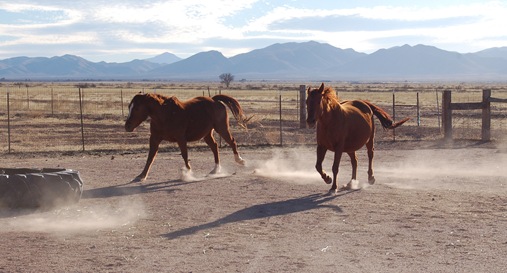 BANSHI & SPORTY GALLOPING IN FOR SUPPER 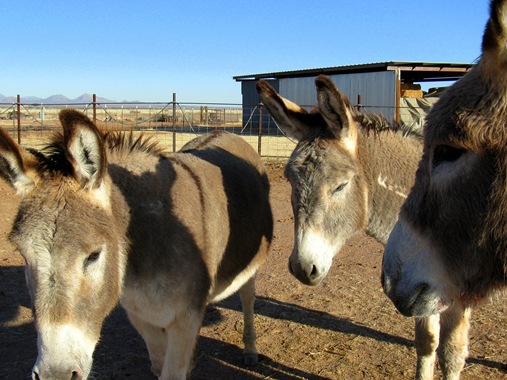 Took us a couple days to weigh the possibilities of roller skating in a buffalo herd, being attacked by roving band of wild chickens, & spending the cold desert nights out on the lone prairie under the endless stars with rattlesnakes in our sleeping bags & coyotes snapping at our heels.  Well, afterall, we were northern folk & not being from these parts we weren't sure just what to expect.  Guess we had just seen too many totally rootin tootin dust em up cowboy movies.  Luckily, common sense prevailed & quickly dispelled most of the fears.  Yes, the nights were cold with endless stars but it was hibernation time for all the snakes anyway & besides, we didn't have any sleeping bags or blazing saddles anyway.   Yep, we said........."we'll do it."

Joanne had given us Jeanie & Ray's email address so we first met Jeannie on-line.  Emails went back forth, questions were asked & answered from both sides as we all got to know each other.  We agreed on a time to head on down to the ranch in southeastern Arizona & the rest as they say is history. 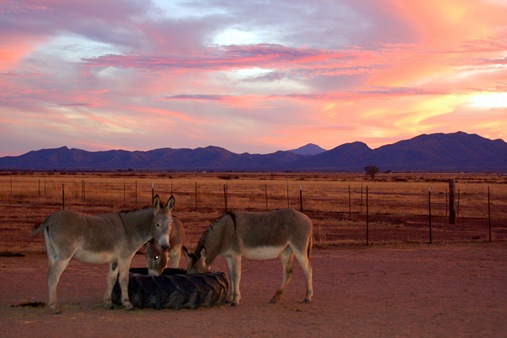 And what about those endless buffalo herds, bucking broncos, wild chicken attacks, charging cattle, & blazing saddles??  Well, we never did see a buffalo so never had a chance to strap on the roller skates .(Roger Miller song;))  The bucking broncos turned out to be a couple very friendly expectant mares named, Banshi & Sporty & the closest we got to a charging herd of cattle were 3 schmoozy burrows, Pancho, Nelly, & Sarah.  The attacking chicken gang turned out to be 9 lovely ladies residing in a coop near our motorhome complete with their very own in house rooster named Rodney.  We have since heard that Rodney & one of the ladies have moved on to poultry heaven:((  And those heel snapping coyotes turned out to be a couple of big slurpy doggy guys named, Pearce & Gleeson who quickly became our most  bestest pals.  We did feed a cat or two every night but never did really see them.   Probably those big fierce mountain lion types from the movies I'm sure.

WOKE UP TO SNOW ON THE SWISS HELM MOUNTAINS ONE MORNING 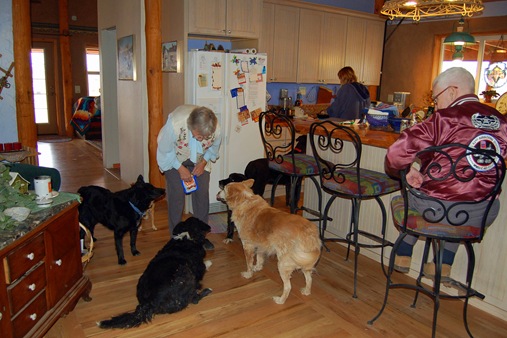 It is this same ranch we are heading back to next week while Jeanie & Ray take another long extended vacation this winter.  For many years they worked that ranch & couldn't go anywhere because of the cattle they raised & fed.  We're just happy to fill in for them again plus it gives us a nice place to stay for awhile in an area rich with old west history.  If anyone is interested they can slip over to our archives & check the dates from February 6th to March 23rd of 2009 for our antics on the ranch plus many day trips.  Same dates for our photo albums.  Lots of photos from the ranch including sunrises over the Swiss Helm mountains to the east & sunsets over the Mule Mountains to the west.  And lots of frolicking critter pics, and........snow!!

SAND HILL CRANES IN FLIGHT PAST A CRESCENT MOON

SUNSET OVER THE MULE MOUNTAINS

GROANER'S CORNER:((  Did you know a toothache is the pain that drives you to extraction!!