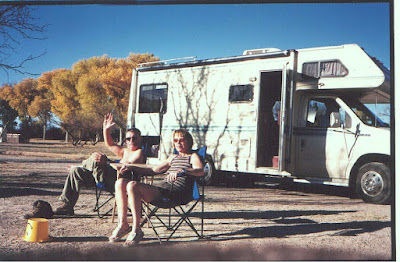 A BIG RV WAVE FROM THE COTTONWOOD CAMPGROUND IN BIG BEND NATIONAL PARK, TEXAS......and yes, those are real Cottonwood trees in the background

Our hottest day of the summer occured Sunday with the highest humidity I've felt for years. Much the same to-day but not as intense. We were finally forced to kick on the A/C yesterday. 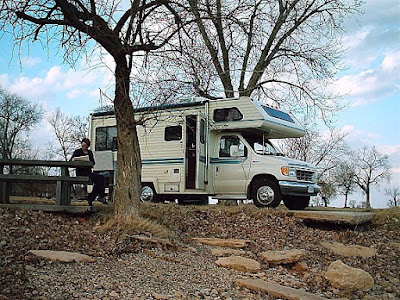 LAKE TEXOMA IN TEXAS.....ON OUR WAY TO BIG BEND....Kelly's checking the map because she probably thinks we are lost

When I first put the bird feeders up a couple weeks ago I thought my biggest problem was going to be chipmunks in the feeders but that paled compared to the problem I'm having now. Gangs of Grackles have taken over the feeding stations dumping the birdseed on the ground. They swoop in scaring the other birds & then hang on the feeders swooping the seeds off the feeders with sweeping motions of their beaks. I've had to stop filling most of the feeders because of the waste so bird city is temporarily on hold until I can figure out some kind of solution. 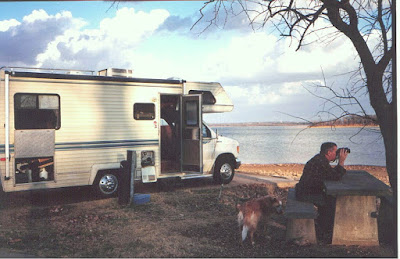 I AM WATCHING AN EAGLE FISHING OUT OVER THE LAKE

I have started an AUGUST photo album & will continue to add photos to it as the month progresses. Thanks to everyone for the nice photo comments. I'll be happy when we're back on the road again & I finally have some new scenery in front of my lens!! 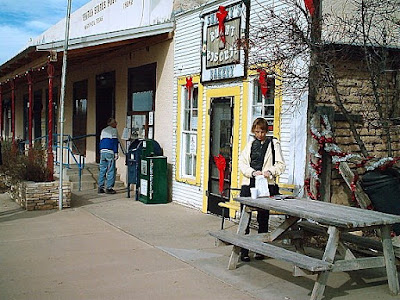 Kelly is off to Spencerport New York in the morning to spend a few days with her Mom & Dad. They are celebrating their 65th wedding anniversary this week & family members are rallying for a get to-gether. Kelly's Dad's health continues to deteriorate & this may be the last full family gathering. 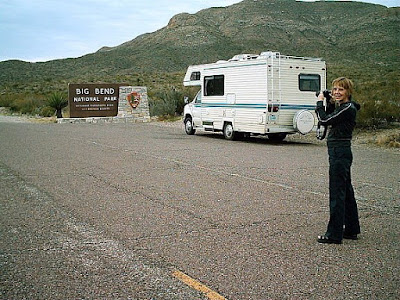 TOTALLY EXHAUSTED BUT AT LAST WE ARE OFFICIALLY HERE:))

I didn't have any photos for to-day but while looking back through our archives I came across a few pics copied from prints of our first major RV jaunt down to Big Bend National Park, Texas in December of 2004. I don't have a lot of pics from that trip because we lost a bunch in a 2007 computer crash. They weren't that great anyway because back in those days I had just started out in the digital camera age with a 1 Megapixel cheap little camera from Staples. But hey, it was the start that got me back into photography after about an 11 year photography drought. 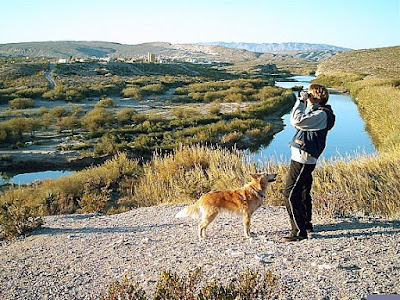 We were driving a Class C Ford Gulfstream back then & Max was our only critter. We had a short window of vacation time because we were both working & had to be back right after New Years. We went all the way down to Big Bend & back in less than two weeks. I was desperate just to see some mountains & cactus again & that was the closest spot I could find to us on a map. Heading south I remember scanning the flat horizon for mountain peaks ahead as we slipped south of Fort Stockton, Texas. And finally there they were, just disant tips at first, but with each mile the mountains just grew & grew & grew:)) I have never lived in the mountains but for some strange reason I always feel at home in them. 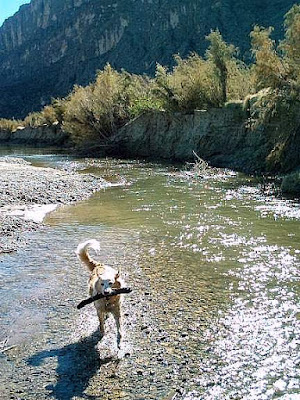 PLAYING A GAME OF STICKS WITH MAX IN THE RIO GRANDE RIVER...... THAT'S AMERICA ON THE LEFT SIDE & MEXICO ON THE RIGHT SIDE OF THE RIVER

It was a short but memorable stay in Big Bend & it solitified in both of us our desire to pursue the RV lifestyle someday. I remember Christmas Eve sitting atop a high rock cropping at the end of a long uphill path with the Rio Grande river below us & watching the beautiful sunset over the distant Chisos Mountains. Moments to remember. We stayed at the Rio Grande Village campground that night & I remember Christmas morning hiking along the banks of the Rio Grande in Boquillas Canyon & feeling so much alive. Second night was in the Cottonwood Campground after hiking the awesome Santa Elena Canyon. 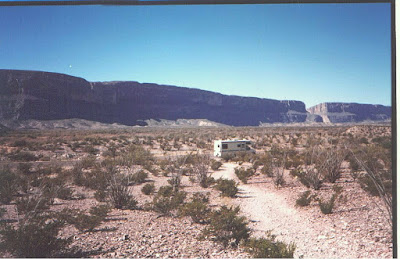 We began our return trip by heading through the dusty little Texas towns of Study Butte, Terlingua, & Lajitus, before rolling through Big Bend Ranch State Park & on to Presidio. From there it was north to Fort Davis where we just arrived in time at the McDonald Observatory high atop the Davis Mountains for a big 'out under the stars,' Starparty. That was a very cold but memorable night & I shall always remember it. 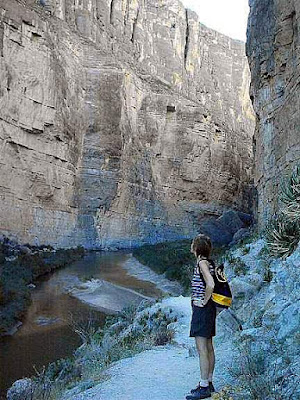 The next morning it was pedal to the metal as we raced across the States on our hurried dash for home. I will always remember the depression & discouragement I felt at having to come back to the ice & snow of our Canadian winter. POSING FOR A PICTURE IN THE CHISOS BASIN CAMPGROUND

The following winter was spent in Canada but we've been fortunate enough these past two seasons to once again make it to our beloved American southwest with each stay being longer than the one before & hopefully this year will be a full 6 months. Yaaaaaaaaaaaaaay:)) 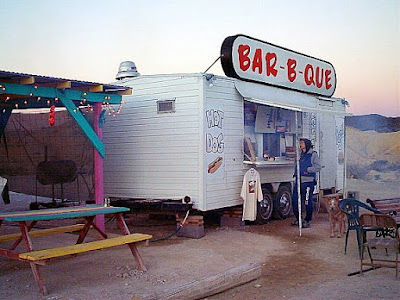 A COLD MORNING........LOADING UP ON HOT TACOS AT A ROADSIDE STAND IN TERLINGUA, TEXAS

GROANER'S CORNER: You know your getting old when everything hurts, and what doesn't hurt, doesn't work!!