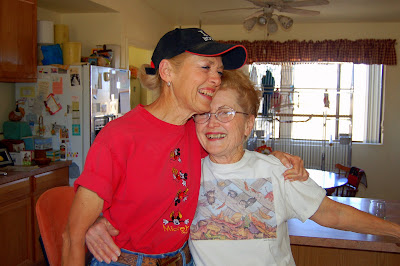 On our journey through life we occasionally meet some fascinating people along the way who turn out to be true kindred spirits. And so it was this morning as we met 2 big horses, 3 mini horses, 4 curious goats, 3 inquisitive sheep, 5 exuberant dogs, 9 passive cats, 1 large feathered & sometimes noisy blue/gold McCaw, a rather handsome & lengthy King snake, & of course 2 wonderful spring chickens named Carol & Rosanna. Actually, Carol & Rosanna are the human Mother & Daughter side of the Paws & Hooves ranch near Sunizona, Arizona. And yes, definitely spring chickens. 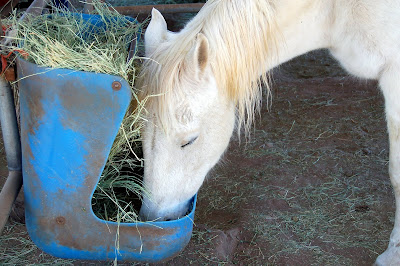 MMMMMM, I LOVE MY OATS

Can't exactly remember how we first came across the Paws & Hooves ranch but I'm thinking it was probably from an RV website or fellow bloggers about 4 months ago. A chance encounter with fellow RV'ers Doug & Joanne http://www.mytripjournal.com/ourdream in Yuma last December brought the P&H ranch to the forefront as Doug & Joanne were good friends of Carol & Rosanna. That meeting in Yuma also directly led us to our ranch sitting job here near McNeal Arizona where we met Jeannie & Ray who of course were very good friends of the P&H ranch as well. We soon began emailing back & forth with Rosanna & that eventually led to our visit to-day. And, another chance meeting on the internet with a lady in Wisconsin turned out to be Rosanna's sister, Donna. Yes, I know this is all a bit complicated & I'm not even sure if I have it all straight but I it never ceases to amaze me how a lot of scattered & random RV people are all interconnected somehow. It's a very small world out here on the road indeed. 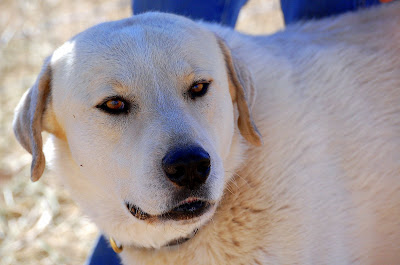 MY NAME'S PAL & I'M THE BIG NUMBER ONE YARD BOSS AROUND HERE!!


Everyone we met spoke highly of Carol & Rosanna & without exception everyone said the same thing..."you just have to meet Carol & Rosanna, they are the best people ever!!" And so this morning we took a drive up to Sunizona & the Paws & Hooves ranch to meet the ladies. Carol is Rosanne's Mother & at 85 she truly is a spring chicken. They are genuine animal lovers & all the critters on their ranch have been rescued from bad situations at one time or another. These are dedicated people & look after all the critters on a daily basis. And they care for these animals with all the love you could ever imagine. 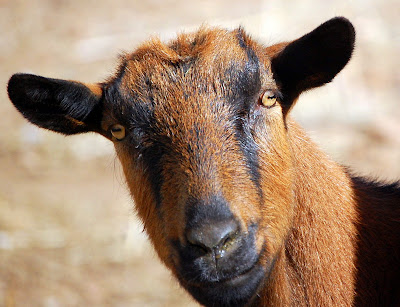 SO, YOU NEVER SEEN AN ALIEN BEFORE??

We first met Fred the King snake. A rather lengthy fellow residing in a large glass case in the living room. Fred was just in the early days of waking up from his winter's hibernation. A rather handsome fellow as he slowly moved about in his environment looking for a snack. An ear piercing screech brought our attention around to a large blue & gold McCaw sitting in a big cage near a window. His name was Chile & I think he figured we were paying too much attention to Fred. All this time little Tooti the wee dog was dancing around us nervously barking. I'm sure she considered us intruders. I can't remember all the cats names but some were sleeping & some welcomed us with open paws. Wow, this was just our kind of place. 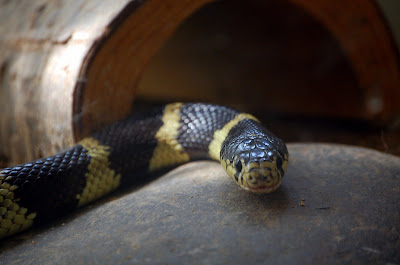 
Outside we met 3 mini horses, & what sweet little fellows they were as they nuzzled up to the fence for a pat on the nose. All the critters on the ranch have names but being on the north side of 60 now, my memory didn't retain them all. The goats & sheep kept their distance but they followed us everywhere with those slotted & mysterious alien eyes. All the while in the barnyard we were accompanied by a large friendly dog who's name was Pal. He is the official yard boss. Next was 2 large horses with one being an Appaloosa. Rosanna fed them & it was funny to see them toss the loose hay on the ground to get at the oat kernels in the bottom of the feeder. Carol was busy topping up the water tanks. 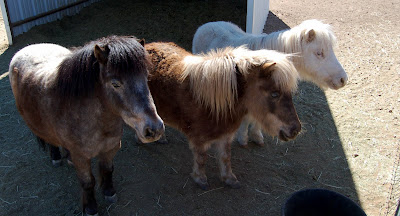 THE ANIMALS ON THE FARM COME FROM RESCUE CENTERS


In the large front yard 3 big friendly dogs just about bust the fence down trying to get our attention. These guys were really hyped for our affection so Rosanna opened the gate & turned em loose. We were nearly bowled over with frantically wagging tails, large jumping paws, & big slurpy smooches. These guys were wired & I loved it. Dogs are my all time favs. Dogs I can bond with.....we have a lot in common:)) 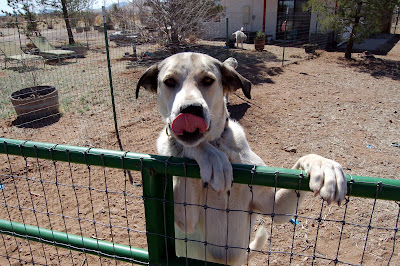 GET OVER HERE MISTER & I'LL PUT A SLURPY ON YA


And what is it that holds this magical animal farm to-gether? Well, "you just have to meet Carol & Rosanna, they are the best people ever." You have to see the love that comes from these two to-wards their animal family. They are dedicated hard workers. At one point I saw Carol carrying a long iron fence post across the yard. Did I mention Carol is 85:)) They told us about the diamond back rattlesnake they had living in their shed for awhile. They let it be & it let them be after Rosanne had a talk with it. The snake lived there until the local vet moved it for them while out at the ranch on a call. Rosanna is an avid & serious hiker having done the Grand Canyon twice, top to bottom. And rafted down the Colorado River through the canyon as well. She has hiked trails in Europe & is out once a week on long hikes in the nearby Dragoon & Chiricahua mountains. In the gloom & doom of our worldly times the personalities of these 2 ladies is like a big breath of fresh air, a warming ray of sunshine, or just a great big glass of feeling good. It was truly an honor for us to meet the whole warm hearted 110 legged Paws & Hooves crew to-day. And one with no legs.........see, I didn't forget ya Fred.........................ssssssssssssssss:))

OUR PHOTO ALBUMS http://picasaweb.google.com/stargeezerguy/
Posted by Al Bossence at 3/01/2009