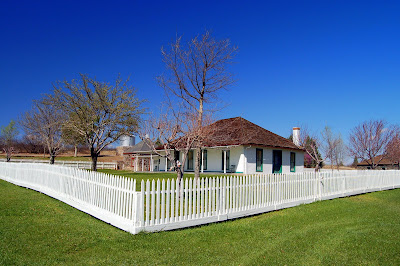 We were up in good time, organized, & had the Santa Fe wheels rolling by 9:30 for Douglas Arizona & beyond. The Texas John Slaughter Ranch is 15 miles east of Douglas right on the Mexican American border. Road is paved for a few miles but then turns into dusty gravel. John Slaughter's ranch seemed a long way & it was hard to imagine people having to travel by horse & cart through the rough & tumble desert all the way to Bisbee for supplies. They sure were enduring people back in those days. 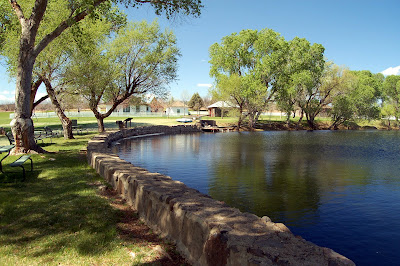 THE ARTESIAN SPRING WAS DAMED TO MAKE THIS POND

The very first thing that impressed me as we approached the ranch was the greenery. The cottonwoods were fully dressed in their shimmering green spring leaves & I couldn't get over the acres of lush green grass. This was a true emerald green oasis in the harsh dry & sometimes bleak looking desert. John Slaughter had chosen this site to build the ranch because of the artesian wells here. He dammed up the springs & made a large pond which is now the water source for all the grass & trees. It has been so long since we have walked on green grass under big green trees & it was that which impressed me more than anything else to-day except for the farm fresh smell coming from the barn. Took me right back to my childhood with memories of barns & cattle. 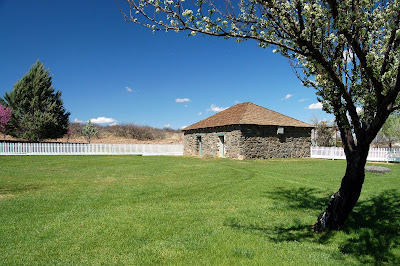 BUILDING WAS ORIGINALLY THE GRAINERY BUT IS NOW A MUSEUM

We were very fortunate to be the only ones there for awhile & it made touring the quiet old ranch house a nicer experience. There are many photographs on all the walls from the life & times of the folks who lived there. The buildings & grounds have been completely & lovingly restored. 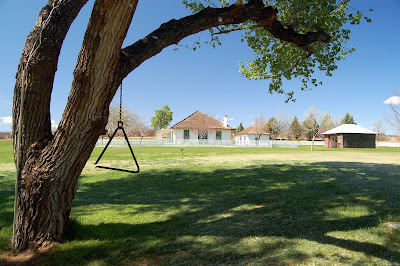 From the house we walked out around the big pond, under the large cottonwoods to a series of steps leading up to Mesa de la Avanzada. This was the site of the old cavalry encampment just east of the ranch where soldiers watched as Pancho Villa's army made camp before turning to attack Agua Prieta south of Douglas Arizona. This army camp was strategically positioned on this mesa with a clear view to the south for many miles into Mexico. Not much left of the fort anymore except piles of old stone walls. Geronimo, years earlier had used this same valley to travel from the Sierra Madre mountains up into the United States on his raiding parties. 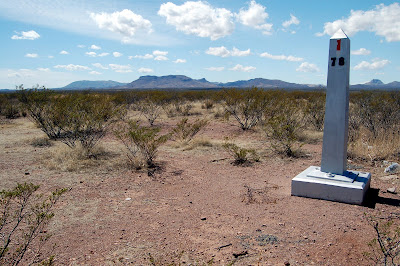 Back in December a rare Blue Mockingbird was sighted at the Slaughter ranch & since then thousands of birdwatchers have been pouring into area for a glimpse of the bird. I think we were the only people on the property to-day who were not bird watchers. I saw some pretty fancy cameras & long powerful lenses as people ambled around the grounds searching for the Mockingbird. And then we heard shouts of, "there it is, there it is!!" Walked over to a group of people with binoculars & cameras snapping away at a grove of bare trees & had us a look. Could hardly see the dark colored bird in the branches of the dark colored tree but I finally saw some movement & started firing away with my little 200mm lens. It wasn't until I got home & severally cropped the pictures that I was actually able to pull something resembling a bird out of the photo. You can see my poor results in to-day's web album. http://picasaweb.google.com/stargeezerguy/ The bird people were sure excited though. From there we strolled around the grounds & I stopped to have a nice little chat with some horses. They sure were friendly. In the meantime Kelly got a ride in the staff golf cart to where our car was parked up the hill from the ranch because by this time my hip & right leg were so painful I couldn't make it any further. She brought the car down & picked me up. 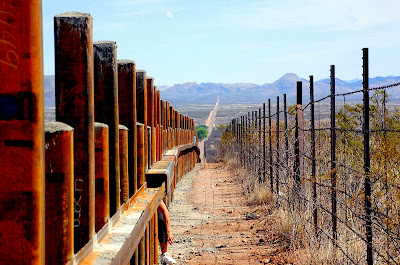 LOOKING EAST ALONG THE THE BORDER BARRIER

From the ranch we traveled a short distance to a spot one of the staff had told us about where the last old original border marker between the countries of Mexico & the United States was located. Those markers used to be placed a mile apart. A sign said to keep out of the area but Kelly made me drive down the road to the border wall anyway. Those photos are also in the web album. It is mind boggling to think how these Mexican people come through these fences & over these walls & then have hundreds of treacherous & unknown miles & dangers ahead of them. And all they have are what they can carry on their backs. We recently found two backpacks alongside the road near McNeal fully loaded with food & I could hardly lift the one pack because it was so heavy. Can't imagine carrying that on your back in the dead of night through endless miles of unknown desert. The determination of these people is nothing short of totally incredible. 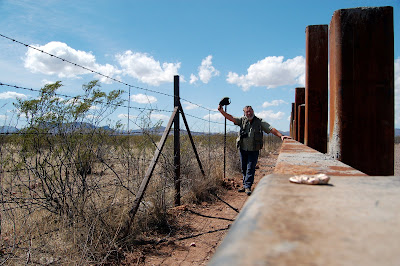 We were back in Douglas by 2 & Kelly picked up a few groceries at Wally-World. The pain in my lower back, hip & leg was too much & I didn't get too far in the store. Made it back to the ranch OK so guess I'll have to just back off the hiking & traveling for a few days until this problem corrects itself. Feels like it's probably a pinched nerve because I can feel numbness down my thigh to my knee sometimes. Guess it's just the price you pay for pushing the aging body a little too hard sometimes. But hey, that's what life is all about & I wouldn't want it any other way.............................:)) 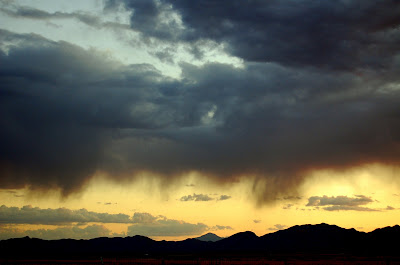