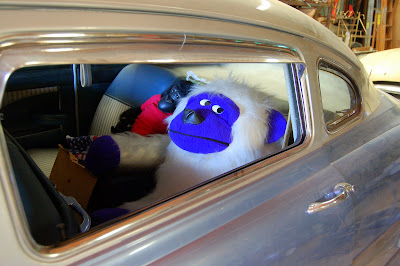 REMEMBER THEM BIG BACK SEATS YEARS AGO:))


We first met Sergeant John back in December last year when Kelly posted a question on the RV Net Forum http://www.rv.net/forum/ about boondocking spots around Sierra Vista Arizona. John responded on the forum saying he lived in the area & worked at nearby Fort Huachuca so new the area well & daily traveled the very road we were presently boondocking near. We corresponded with him back & forth for a bit & John dropped in to see us one Friday afternoon on his way home to Elfrida from Sierra Vista. He extended an invitation for Kelly & I to drop in & see him & his wife after we got settled in our McNeal ranch sitting job. To-day we dropped in & met John again, his lovely wife Jackie, & their cute little dog, Mattie. She's a little peach. 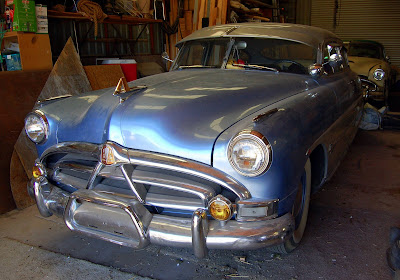 
John is a car buff & his two vintage Hudson Hornets have been a big part of his life for quite a few years. Lovingly cared for they have won many awards & been to countless car shows across the country. John once had the largest Hudson website on the internet.......until AOL pulled the rug out from under many subscribers a few years back & he lost the whole site. Much of it was backed up but John just hasn't got around to setting it all up again.

WHEN CARS WERE CARS


The cars had been under winter wraps in John's large garage until to-day. The dusty covers came off & the Hudson's came out. A gun metal blue & gray 1951 Hudson Hornet & a pale yellow & green 53 Hornet. The 53 actually came from Saskatchewan Canada & John drove up their to trailer it back. The farmer he bought it from actually sent him the front license plate a couple of months later. You can see it in to-day's photo album. 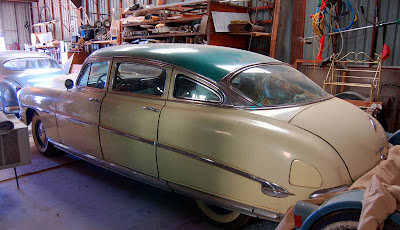 
It's been awhile since I was around older cars & despite being about 8 years old when these cars were popular they did bring back memories for me. The overall rounded design of the car reminded me of the Chevs, Fords, & Dodges of that era as well. The big chrome grills, large whitewall tires, wrap around sun visor, & the big hood ornament. They all had hood ornaments back in those days as well as big chrome bumpers. The cloth designed & soft cushy seats, big round chrome centered steering wheel, the large round speedometers, & the big thumping bass sound of the single speaker in the middle of the dash. These were the days when cars were cars & quality meant what it said. No shortcuts, no plastic pieces, no back room politics about giving the consumer minimum amount of product for maximum amount of money. Those were the days when you trusted the cars your neighbor built. Those were the waning days of the last great decade of trust. Those Hudson Hornets came from the 1950's. And those Hudson Hornets in John's garage to-day were just about as new as the day they were made. And that was nearly 60 years ago & that says something about quality!! 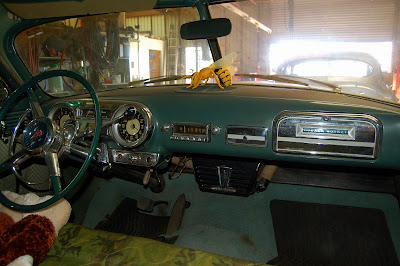 A VIEW FROM THE BACK SEAT OF THE 53


Jackie & John live in the little burg of Elfrida north of Douglas, Arizona. They have a class A motorhome & generally travel in the summer months. They have covered all of the lower 48 States. John says the Army had occasionally sent him on training classes around the country & when that happened they took their RV with them. Great way to travel & see the country. This summer they heading over to California. 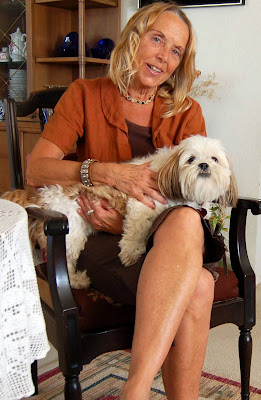 We don't often socialize a whole lot but I must admit it was nice to actually be sitting in a real stick house again to-day talking to some interesting people. Second day in a row for us & we're beginning to feel like social butterflies. When your living in an 8 x 33 box day after day it kind of blows you away when you step into someone's real house. Their kitchen is huge and they even have a real full size rec room basement under their house. I can't even remember the last time I was in a rec room basement. I had one in a new house a long time ago when I lived in Stratford, Ontario & it was my favorite place to hang out. Cool in the summer & warm in the winter. No outside noise & what a great place to run & hide when your wife had things for you to do. 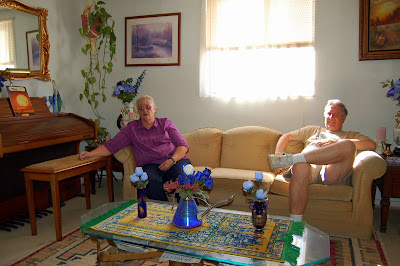 JACKIE & JOHN AT HOME IN THEIR COMFY LIVINGROOM


OUR PHOTO ALBUMS http://picasaweb.google.com/stargeezerguy/
Posted by Al Bossence at 3/01/2009