IN SEARCH OF OLD FORT RUCKER 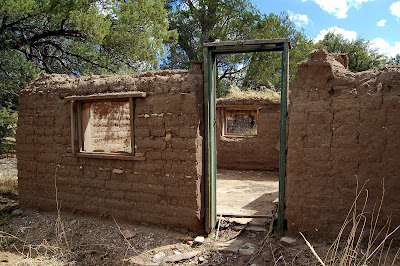 
No improvement in the back & leg this morning but it was a nice day & I didn't want to sit around again. Kelly picked up a cane at the Thrift Store awhile back so I threw that in the car & we headed off for Rucker Canyon in search of old Fort Rucker. 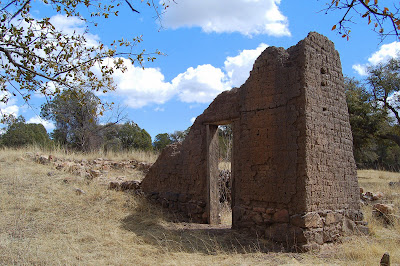 THIS WAS THE COMMISSARY


While at the Coronado National Park a few days I got to talking with a ranger who told me where the ruins of old Fort Rucker (formally Camp Supply) were in the Rucker Canyon. We had been through that area a week ago but didn't know about the Fort then. From the ranch we headed east about 9:30 through McNeal to Leslie Canyon. Skirted around the south end of the Swisshelm mountains into the sweeping picturesque hills of Leslie Canyon. The flat dirt road led us north until we intersected with Rucker Canyon road. We swung northeast into the Chiricahua mountains & drove until we reached the junction with Tex Canyon road. This is where we began our search. Parked the car beside a rock & boulder strewn creek bed & headed up the creek for a hundred yards or so then headed left through an area of trees & shrubs. I was glad I had the cane with me. Continued through the brush until we came to a road but still no sign of the fort. Kelly walked back to the car & brought it around to the road. We drove up a rocky narrow path into a grassy tree lined area but still no Fort. Drove back down to theTex Canyon road junction & headed south for a bit when I spotted what looked like an old adobe wall through a bunch of trees on the east side of a dry creek bed. Saw a clearing ahead & pulled over. There on a barbed wire fence hung a small faded sign that said, Camp Rucker U.S. Army 1872-1880. We had found the Fort!! 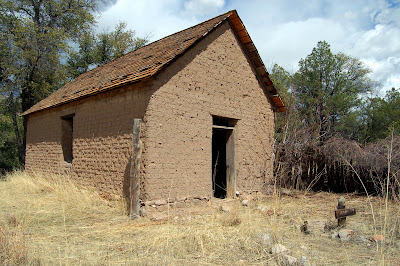 It was about a quarter mile walk from the road to the first building. An old log pole barn....with a new roof. There were cattle here as well. We could see some old adobe ruins farther on so we headed in that direction. I was surprised when we came across our first reader board. It was obvious no one had been here for a long time but I remembered the Ranger telling me there are plans afoot to restore this old Fort so I am assuming the reader boards are maybe the first step. Noticed later that a couple old buildings had new roofs on them to protect against further weather deterioration. Fort Rucker is actually in better shape than Fort Bowie because it has some buildings with actual walls still standing. One building like the officer's quarters still has glass in the windows & wooden doors . When Fort Bowie was decommissioned people came in & basically ripped the Fort to pieces for it's lumber, etc. That didn't happen here at Fort Rucker but Fort Rucker is only about a quarter the size of Fort Bowie. A much smaller outpost. 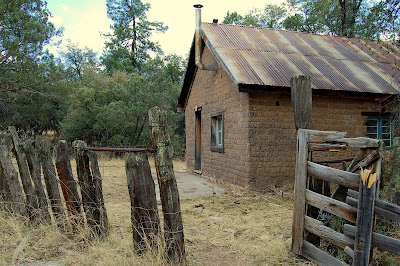 REAR ENTRANCE OF THE OFFICER'S QUARTERS

We spent the best part of a couple hours wandering around the grounds looking at the ruins. Once again, with the help of the reader boards I was able to take a lot of photos & you can follow the story of Fort Rucker through the story boards & my pictures in the web album. http://picasaweb.google.com/stargeezerguy/ Standing there on the grounds it's hard to imagine what the day in a life of a trooper was like 135 years ago. There is an old water tank still standing, a bake shop, & officer's quarters still intact. Looking at the open door of the bakeshop I tried to imagine the soldiers coming & going through there. The smell of fresh bread baking in what's left of the large oven at one end of the old adobe building. Ruins of the original commissary are there & another adobe building with two rooms but no roof. No idea what that building was. The officer's quarters building is still in remarkably good shape & a person could move right in there. The tin roof has saved it from decay & the floor felt solid. A couple closet doors hung open where officer's uniforms once hung. A raised platform for the wood stove looked like it was waiting for another stove to be placed on it. It was as if the officer's had just stepped out for a moment. 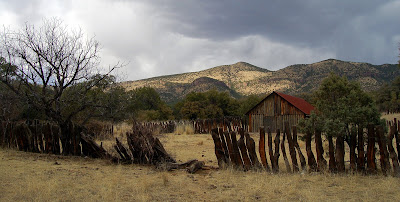 But, the strangest building of all was the house. You will have to go to the web album & see the pictures because it's a bit hard to describe. It's an old adobe house but the interior looks like it's from about the 1930's or earlier. No reader board anywhere to tell anything about it. Might have been part of Fort Rucker & then renovated in the early 1900's or something. After the Fort was decommissioned the land was used for ranching so maybe it was built as a ranch house. Many small rooms inside & on different levels. Best have a look at the pictures. 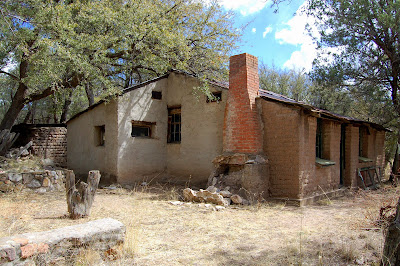 The temperature had dropped while we were there & a cloud cover moved in as we departed old Fort Rucker & headed back down the long dusty road through Rucker Canyon to civilization. I took a few pictures from the car window as the dark clouds moved in & before long it was raining. It was good to get back to the rig, crack on some heat, & grab ourselves a bite to eat. It had been another good day....sort of.
My leg had given me a lot of trouble for about the first 40 minutes of our hike but then the pain went away while we were walking around the old Fort's grounds. Felt so good I was bouncing around like a ping pong ball but by the time we got home & I tried to get out of the car, the pain was back full force on the outside thigh of my right leg. Seems that sitting bothers it the most. Oh well, not much I can do about it until that nerve decides to unpinch itself I guess. Maybe to-morrow I'll take Roger Miller's advice & try rollerskating in a Buffalo herd................................ 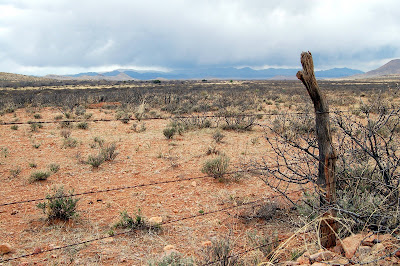