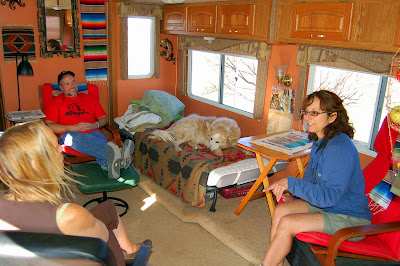 VISITING WITH JIM & RENE
Heavy frost on the car this morning as we started our first full day by ourselves on the ranch. Morning chores went off without a hitch & it was nice to see all 5 dogs running around playing. Even Gleason the shy one was bouncing around me like a little puppy dog. It always gives me a warm feeling to be accepted........especially by animals:))

Worked away on a little garden project before lunch over at the house & it felt good to be on the end of my old shovel & rake again. I have always found gardening very relaxing & a great way to get some good old exercise & dirt under the fingernails. While I was working away I became aware of cars going by slowly out on the road. At one point 5 vehicles were stopped out in front of the driveway. Wasn't sure what they were looking at but Jeanie had said sometimes people stop to look at the donkeys.....but the donkeys were out of sight back behind the hay barn. I still don't know what they were all looking at but I did walk over to the rig & trade my baseball hat for my cowboy hat. Figured maybe they were all from back east somewhere & wanted to see a western ranch & if that was the case, they would get a bigger bang for their buck if they could see a real live person with a cowboy hat on. Well, that's how I figured it anyway. 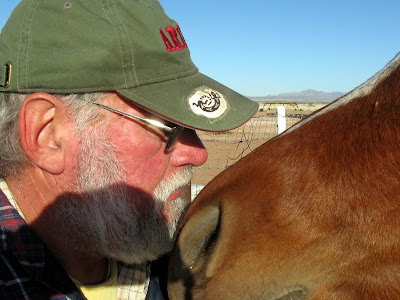 ME & BANSHI ARE BIG PALS NOW 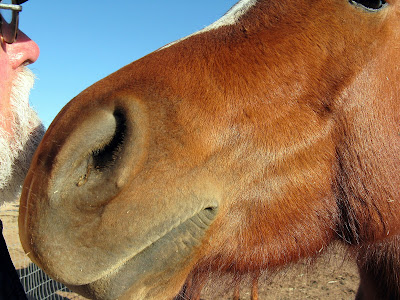 SHE LIKES WHEN I TICKLE HER NOSE WITH MY BEARD
Yesterday we received an email from fellow RV blog travelers Rene & Jim. http://www.liveworkdream.com/. We had corresponded with Rene & Jim over the past year ever since they had met Kelly's sister & husband, Becky & Norm, over in Truth or Consequences New Mexico at the Riverbend Hot Springs Spa. Rene & Jim are on their way from California over to Rodeo New Mexico & Terilingua Texas to have a look at some property. Because we have 3 dogs & are animal lovers, we were first attracted to Rene & Jim's site because of their 3 legged dog Jerry. Jerry had lost his leg to cancer & unfortunately he later lost his life to the same disease last year. This coming Sunday night Feb 15th, Rene, Jim, & Jerry are going to be on the PBS channel in a show entitled, Why We Love Our Cats & Dogs. The show will be on at different times across the country so check your local listings for the correct time. 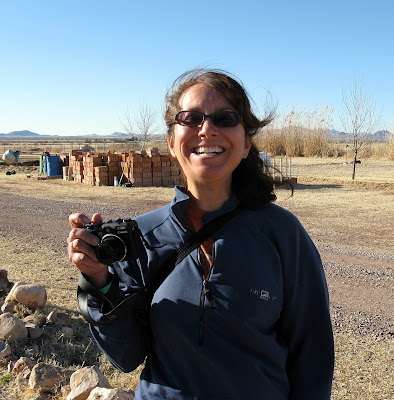 RENE & I HAD A SHOOT OUT WITH OUR DUELING CANONS
Rene & Jim are here at the ranch to-night. They had spent last night in a noisy parking lot area in Benson so we suggested they slip down to the ranch for the night. Ray had put in two extra RV sites here so there were extra RV hook-ups. Kelly phoned Jeanie this morning to OK the deal & Jeanie being a true animal lover herself said yes, by all means, have them come & stay. So, this afternoon we met Rene & Jim. It's not often in this lifestyle that we meet people younger than ourselves but Rene & Jim are two vibrant younger people full of life with a zest & zeal for adventure. They are fulltimers & have been on the road for about a year & a half working here & there & enjoying life. Check out their website. http://www.liveworkdream.com/. These are two very genuinely nice people with many interests. They came with us on our chores this afternoon & we all later got to-gether for supper in our rig. Chatted away until well after sundown. We have met so many really nice people in our travels & we're happy to say that to-day we have just met two more................................. 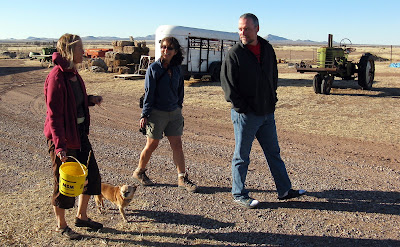 OUR PHOTO ALBUMS http://picasaweb.google.com/stargeezerguy/
Posted by Al Bossence at 2/13/2009

Email ThisBlogThis!Share to TwitterShare to FacebookShare to Pinterest
Labels: Liveworkdream