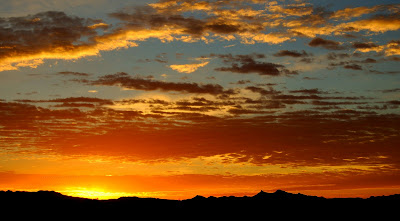 SUNRISE OVER THE SWISSHELM MOUNTAINS


It was a cloudy & quiet Sunday on the ranch to-day. One of those rare days when it was necessary to kind of just sit & do nothing. Time to heal some minor sprains, strains, & tired old brains. It was a good day for reflection too. And it was a good day for music & old memories.

I have a habit of leaving the same station on the satellite radio all the time & earlier this morning while puttering around outside, Kelly decided to switch channels & put on some good old 60's music. It's been awhile since I've taken the time to listen to an age of music that was so influential to so many people. I am a person who loves music & has grown up surrounded by it for most of my life. I was born in 1944 right into the big band era. What a great beginning it was & what a great age for music. The 40's gave way to the be-boppin 50's & the great music machine just kept right on a rockin & rollin right through to the late 80's & early 90's. It was an era of music like no other, & we are not likely to ever see that wide range of superb talent, creativity, & simply feeling good music ever happen again.......ever!! The great music has truly died.

To-day as I put my head back & relaxed in my chair I let the 60's music take me back to a decade of tumultuous changes, a time of good & a time of bad. A time of happy & a time of sad. The 60's meant The Beatles , The Stones, The Beach Boys. Memories of friends who are gone now. Special friends, best friends, girlfriends. With each song on the radio to-day came faint whispers out of the mists so long ago. Buddy Holly, Elvis Presley, Duane Eddy. The many cars, the many jobs, & the many moves. The relationships & break-ups. It was a decade of excitement, & unlike to-day, the music was the driving force for a generation of us trying to catch onto the coat tails of something moving so fast, none of us understood which way it was moving in the first place. Marty Robbins, Johnny Cash, Jim Reeves. It was a time of growing up, making mistakes, & occasionally getting something right. The music was happier, people were kinder, cars went slower.

AND ANOTHER DAY BEGINS IN THE MULE MOUNTAINS

Songs on the radio to-day like Homeward Bound by Simon & Garfunkel & Spooky by the Classics 4 take me back to a time I lived in Toronto for a short time. Johnny Rivers, The Everly Brothers, Roy Orbison. Jimi Hendrix, The Moody Blues, & Santana take me to a another place & another time, & another relationship. "What A Day for a Daydream" by the Lovin Spoonful take me back to my Navy days & "The Mountains High" by Dick & Deedee take me even further back to my high school days. And so it goes as the tunes pour out of the radio. Another car, another job, another town, another era. Another set of memories to file away in the recesses of the mind.

SUNRISE ON THE RANCH
Best friends have come & gone. The Bob Dylans are gone. Best high school buddies have long been lost over the years and in the RV world, new friends become memories before you even get to know their last names. Sing to me, Stevie Wonder, Dianna Ross, & Ray Charles. Memories flood in & fill me with many regrets, a few chuckles, some embarrassment, & an overall sadness. There is no turning the clock back at this stage. To late to make the apologies, to soon to make the promises, & just to crazy to say the hell with it all & let the Troggs sing "Wild Thing" one more time . And the songs keep coming. Crystal Blue Persuasion, Wolverton Mountain, Sea of Heartbreak, All Along the Watchtower, Dock of the Bay, A Whiter Shade of Pale, House of the Rising Sun, The Sounds of Silence, Honky Tonk Man, California Dreamin, Bridge Over Troubled Water, Yesterday, El Paso, & Skeeter Davis singing, The End of the World.

And the end of the world it is for the decade of wondrous music, imagination & timeless energy. The days of feeling alive & being inspired by the music are gone & there is no new music out there good enough or great enough to take it's place. But, all is not lost. We have our memories. Sing "Crazy" to me Patsy Cline, play "Black Magic Woman" for me Santana, & "Light My Fire" Jim Morrison...........................

No photos for the web album to-day.

OUR PHOTO ALBUMS http://picasaweb.google.com/stargeezerguy/
Posted by Al Bossence at 2/15/2009