Jeanie & Ray's ranch sits right next door to a recreation area called the Whitewater Draw Wildlife Area here in southeastern Arizona.
http://www.wildlifeviewingareas.com/wv-app/ParkDetail.aspx?ParkID=162
http://www.azgfd.gov/outdoor_recreation/wildlife_area_whitewater.shtml
Thousands upon thousands of sand hill cranes & snow geese fly right over their ranch every day. The birds spend the night south of the ranch & lift off in the early morning flying north to feed in fields about 50 miles away. About mid day they begin returning to their water habitat in large groups & we can hear their calls high overhead practically all day long. Huge formations, one right after the other winging their way across the skies. 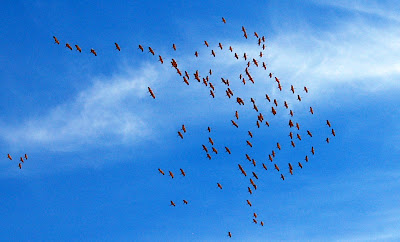 Our morning chores are shorter than the afternoon ones. First thing is to feed the 9 chickens & one noisy rooster. That rooster starts crowing about 4 in the morning & just keeps going, & going, & going. I call him the Energizer Rooster!! The two outside cats & 2 dogs are fed next & that's about it for the morning's chores. Pretty easy so far huh. Oh by the way, the two horses names are Banshi & Sporty & they are owned by a lady living in Tombstone. Both mares are expecting foles in March so the owner will be picking them up before that occurs. (I hope) 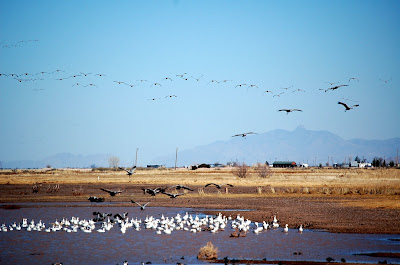 SNOW GEESE ON THE WATER

We saw the huge flocks of Sand Hill cranes going over heading north this morning so later on we took a drive down the road to the shallow lake where they would be returning to later. Bird watching people were already there with spotting scopes & cameras waiting for the massive flocks. We walked around on top of the berms & saw a lot of various ducks & small birds. My small telephoto lens only goes up to 200mm so I'm limited as to what I can photograph well. Birds are small objects & unless they are sitting at a birdfeeder in your backyard it's pretty hard to get close enough to them to take any kind of quality shots. However, I did manage to shoot well over 150 photos of which only a small amount will make it to the photo album. http://picasaweb.google.com/stargeezerguy/
We did get a tip about a Great Horned Owl in one of the Wildlife's buildings so I did manage a picture of that fellow as well. 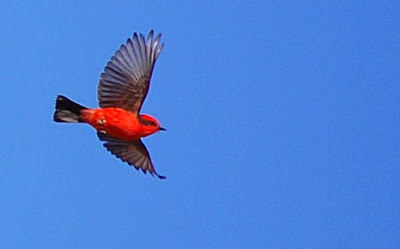 VERMILLION FLYCATCHER ON THE WING

We were back to the ranch around noon & spent the early part of the afternoon relaxing. Ray had earlier roto-tilled up some ground close to the porch & I had raked it so this afternoon Ray helped Kelly plant some onions, radish, & spinach. I then helped Ray cut down some large reed grass to use the stems for making poles in another fencing project around a second border vegetable garden. By then it was nearly 4:30 & time for the afternoon chores which were the same as this morning but with the added duties of feeding the donkeys & horses. It's a good thing Jeanie printed out all the instructions or we would be feeding the hay to the dogs, the chicken scratch to the cats, & the dog food to the turkeys. Turkeys??? 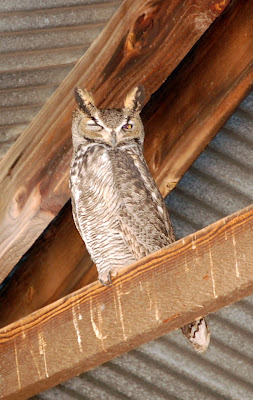 A GREAT HORNED OWL KEEPS A WARY EYE ON ME

Sat on the wrap around house porch before supper talking with Jeanie & Ray. Truly nice people. They almost have their 5th wheel ready to head out for some holidays soon. Well, as soon as they can teach us two knuckleheads how to give the right food to the right animals that is. And no, Toto, horses do not have feathers.................................... 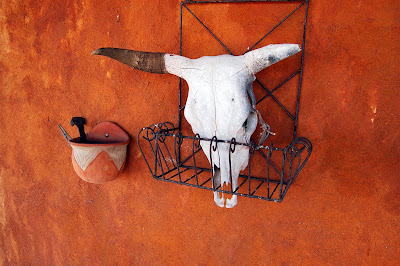