THIS MORNING I SMOOCHED A HORSE.....AND THEN WE WENT TO BISBEE 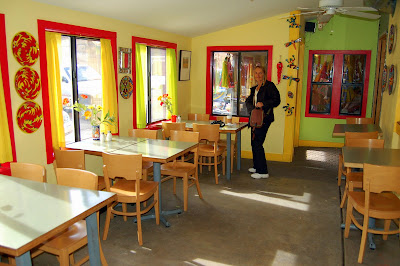 COFFEE & PIZZA AT THE HIGH DESERT CAFE IN BISBEE


Frost covered everything this morning but it was better than the day before when we woke up to the ground all covered with snow. Had forgot to un-hook the water hose so it was froze up real darn good but we had lots of onboard water in our freshwater tank so no problem.

We generally head out to do the chores shortly after 8 in the morning & by that time the sun is over the mountains & the warming process has begun. The chickens were happy to see us as were Gleeson & Pearce, the two rootin tootin ranch dogs. Weatherman said we were in for some good weather over the next bunch of days so decided to open the corral gate & let the horses & donkeys out to pasture. As I walked across the corral, the two horses, Sporty & Banshi closed right up behind me, one on either side. They were pretty happy because they knew they are heading out to the fields. As I reached down to undo the chain at the gate, Banshi put her dead down right over my shoulder beside my face. I turned my head & put a little smooch on her nose. First time I ever smooched a horse. Swung the gate open & away went the donkeys & horses went kicking up their heels in jubilation to be out of the corral at last. 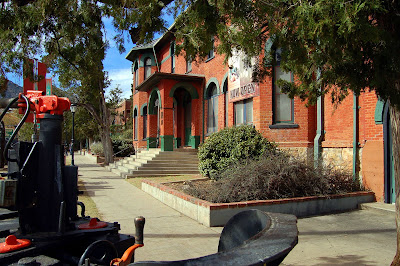 Jeanie had recommended a really great hot dog place in the San Jose area of Bisbee so this morning we figured we'd head on over there & check it out. Nice drive on Frontier & Double Adobe roads to catch highway 80 into Bisbee. We found Jimmy's Hot Dog Company without any problem. Pretty hard to miss because it's painted bright yellow & trimmed in red. This is a really nice clean little diner done up in the old Chicago style diners of yesteryear. Friendly staff with great hot dogs & home cut fries. Loved the music they were playing on a quality sound system. You don't often find that in eating places. Jimmy himself came over to talk to us. Nice fellow. We'll definitely be back there sometime in the next few weeks. From Jimmy's we slipped across the street to a Safeway grocery store for a few groceries. This was probably the nicest grocery store I've been in simply because of the way they have used creative lighting to highlight their products. Makes for a nice homey feeling. Not just that usual bland fluorescent lighting glare from above like in other stores. From there we headed over to the main part of Bisbee. We had been there once before but it was a brief encounter. We passed through this area 2 years ago with our truck & fifth wheel one day. Bisbee is a mile high in the mountains & by the time we got there it was snowing. We got lost in the town somehow & without ever even stopping we somehow got spit back up onto the highway heading west. We were tired & confused so just kept on going but I do remember thinking at the time, this looks like a really neat place, hope we can come back here some day. Well, to-day was that day. 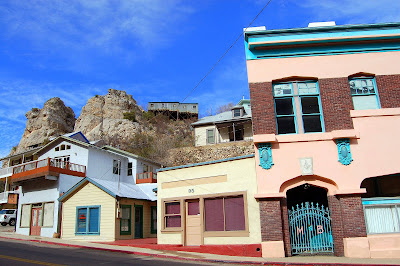 A TOWN BUILT ON MANY HILLS

Bisbee is a town like no other. http://www.discoverbisbee.com/ It is in an alpine like setting high up in the Mule mountain range of southeastern Arizona. It's multi-colored buildings, fascinating old west architecture, narrow streets, & collection of artsy type shops & characters make it a totally unique experience. We spent a couple of hours walking the town & taking photos. Bisbee is a real mosh of narrow streets, alleys, & hidden stairways. We only saw part of it so will be returning there again sometime over the next few weeks for sure. From the ranch to Bisbee is only about a 25 minute drive. Lots of local characters in Bisbee & it's plain to see where all the aging hippies vanished to years ago. They are all in Bisbee with their folk art, music, trendy little shoppes, cafe's & eateries. Bisbee is much like another little Arizona town we came across last year....Jerome, over on Mingus mountain near Cottonwood, but I think Bisbee is even trendier than Jerome. This is a place you have to see for yourself. My photos just don't do it justice I'm afraid. 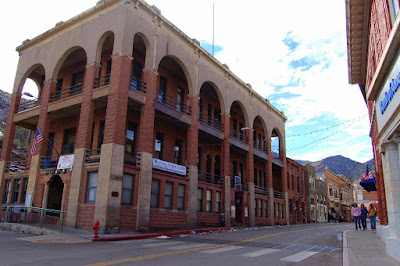 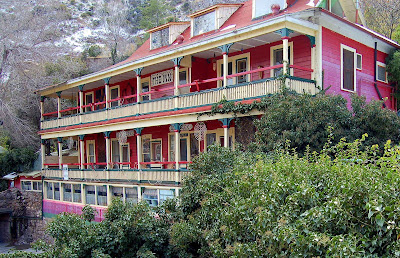 THE OLD ARCHITECTURE IN BISBEE IS TOTALLY AWESOME

Just one of the fascinating places we came across to-day was, The Shady Dell. Jeanie had said not to miss this.
Nine lovely fully restored vintage aluminum travel trailers are here in a cozy park like setting & are available for overnight or weekly rental. Their brochure says, "For once, experience the 1950's in full Technicolor. Met a friendly lady there who showed us inside one of the trailers. The old television was black & white & the 50's radio plays only that genre of music. It is truly like stepping back in time to the 1950's. There is even an old wooden yacht that can be rented for a stay. This is really a neat-0 place & I did take a bunch of photos here. http://www.theshadydell.com/ Also on the property is Dot's Diner. This little diner originally sat on the corners of Ventura & Topanga Canyon Boulevard in Los Angeles, California. It was closed to-day but we are definitely going to go back for some eats at Dots. http://offbeateats.blogspot.com/2008/01/dot-diner-bisbee-arizona.html 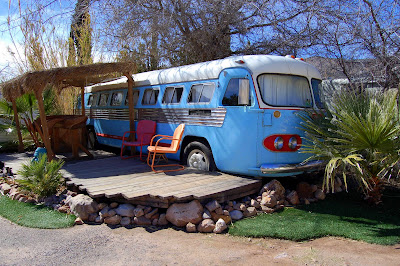 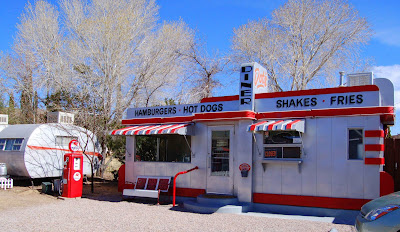 We were back to the ranch by 3:45. Jeanie & Ray were just putting the final touches on their upcoming travel plans. Their fifth wheel is all loaded up & they're just about ready to hit the road for a long overdo little holiday somewhere. While we were standing outside talking, Ray spotted an illegal alien walking across one of the fields about a half a mile away. He said that's not unusual in this area. 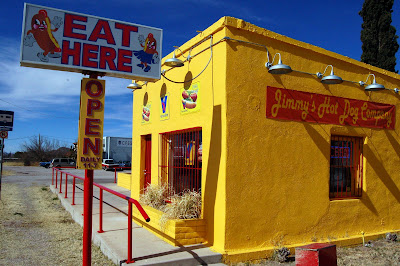 OUR PHOTO ALBUMS http://picasaweb.google.com/stargeezerguy/
Posted by Al Bossence at 2/12/2009