THE DONKEYS BEAT THE HORSES TO THE HAY IN THE TIRE

It was apparent right from the get go this morning that we had a big weather front coming in. The winds started early & continued to really build through the morning.

Kelly & I were out the door at 8 with our chores list in hand & got the chickens & dogs fed. Remembered to turn the farmyard water on as well. Jeanie & Ray came out later to confirm that we had done things right & no chickens lives were lost. 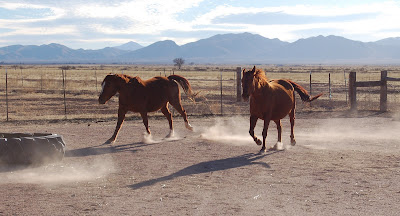 We were low on milk so figured we'd drive over to Elfrida about 7 miles away & have ourselves a look around for a grocery store. Passed through McNeal on the way but not too much there. Heard about a good bake shop in Elfrida so that was our first stop. Big sign said "Breakfast" so that was good enough for me. Hadn't had myself a big old mess of bacon & eggs for a very long time so this morning was the morning. Next was the Library (went right by your house Sarge but looked like you had company:)) where Kelly got a library card so we could pick up some DVD movies. Stopped at the High Lonesome Trading Company for a browse.

By the time we got back to the rig the winds were so bad we just got ourselves inside & closed the door tight. Couldn't let the doggy guys out for fear of them getting their fur blowed right off. The dust blowing across the roads & fields made me think of those blowing & drifting snow storms in Canada.

AL PREVIOUSLY PUTTING HAY IN ONE OF TWO TIRES

Kelly had picked up 5 DVD's at the Elfrida library so figured we might as well have us a Saturday afternoon matinee. Because we are in the Tombstone area we decided to watch the movie "Tombstone" with Kurt Russell & Val Kilmer. This is a very, very, bad movie. It would be on my top 10 list of the worst movies that I've ever seen. It's waaaaay over the top, poor acting, & not factual. In other words, a typical Hollywood shoot-em-up western movie. I think the movie actually did a dis-service to the town of Tombstone. It's so bad I don't think it should have ever been released. Just my opinion!! 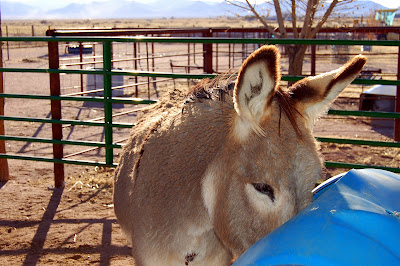 HEY, HOW'S ABOUT SOME HAY IN THIS BLUE BIN FOR ME!!

Jeanie & Ray had to leave for a Birthday party up in Sunizona so we were totally on our own for the afternoon chores which included feeding the horses & donkeys. We got off to a good start when Kelly lost her glasses which she later found in the chicken pen under a pile of chicken dust. Gleeson & Pearce, the 2 dogs were totally confused about these two aliens putting food in their dish & I think the two yard cats left town. We did gather 3 eggs though & not one single chicken was harmed in the writing of this blog.

Next, it was time to feed the donkeys & horses. Kelly whooped up a predetermined formula of mash & away we went. She headed over to the horses feeding station & I went & loaded up some hay in a small cart. Headed for the corral & made sure Kelly locked the gate behind me as I divided the hay between two large tractor tires in the corral then walked (pictures in album) over to open a second gate to let in the 3 donkeys & 2 horses. Donkeys weren't sure about the look of me so hung back a bit until I moved away from the gate. Figured they'd just as soon give me a slap upside the head going by anyway. As soon as I was far enough away the stampede was on as the donkeys & horses came roaring round the corner & through the gate about 300 miles an hour. Donkeys got to the tire first & managed to wolf down some hay before the horses roared in & turfed them out. Donkeys went to the second big hay laden tire & wolfed down a few more mouthfuls of hay once again before one of the horses took over that feeding station as well. Oh no, now what to do. The donkeys were standing there looking at us with long, sad, & hungry faces. I went back & got a big forkful of hay & headed back for the corral. Carrying all that hay on a big hay fork in a big wind acted like a sail & I nearly ended up on the other side of the property. The wind had taken half the hay by the time I got back to the corral but we did manage to get some into a blue plastic bin for them. They did get some but I think the guys are gonna go to bed to-night with a little less in their tummies than they did last night.

AL EARLIER OPENS THE GATE FOR THE DONKEYS & HORSES

We fought our way into the wind & headed back to the rig. Remembered to turn off the barnyard water too. I really felt sorry for the Sand Hill Cranes & Snowgeese as the large flocks fought their way directly into the big headwinds overhead on their way back from their feeding grounds. I stood & watched as large flocks were at times motionless in the air from the big wind gusts. They struggled as best they could, keeping lower to the ground than usual. We thought of maybe hooking up one of Ray's trailers & driving up to the feeding grounds to see how many cranes & geese we could get on the trailer & fit into the car to drive them back to their roosting area.....poor guys. 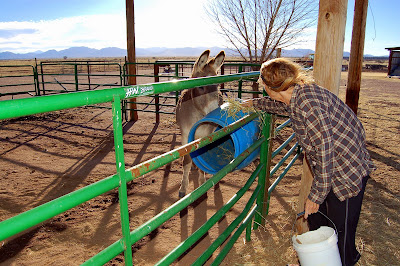 WELL, I KNOW IT ISN'T MUCH....BUT HERE'S SOME MORE ANYWAY

P.S. All the great photos at the corral to-day were taken by Kelly:))