THE BAYFIELD BUNCH ARRIVES AT THE ARIZONA RANCH 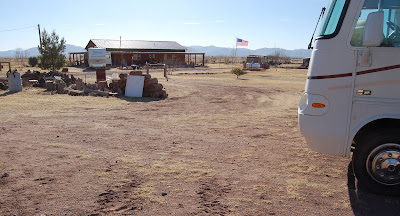 I generally like to get things squared away the afternoon before the next mornings departure. Sometimes in the mornings the roof of the RV is very wet from the night's dew so unless I want to end up with wet pants, I'd better get those panels down before nightfall. Also, some mornings can be windy or cold so I'd rather secure the panels on a previous sunny warm afternoon. In my impatient world it just wards off getting myself into a big snit first thing in the morning & wrecking up the day for myself. The more I'm able to do the day before, the less I have to do in the morning because......once I'm ready to go.......I'M READY TO GO!!

As usual, I was sad about leaving a memorable spot but excited by the unknown adventures ahead. Did a final walk-around of the rig, said good-bye to our site in the Tombstone Hills, climbed into the rig & headed out. It wasn't far to the ranch so we didn't hitch up the car. Kelly & the Motormouse drove up to the gate by the road & opened it. Max, Checkers, & I rolled through the gate & headed northeast for Tombstone with Kelly & the mouse bringing up the rear. The car was needing some gas so after a quick stop for fuel we were southbound out of Tombstone on our way to the Ranch. We knew we were plenty early so we took our time heading southeast on Davis road & just enjoyed the beautiful scenery along the way. Large prairie like grasslands surrounded by distant mountains on all sides. Another big Arizona morning.

We rolled into Jeanie & Ray's ranch around 10:30 which was about half an hour ahead of schedule. I'm one of those guys who always gets to where he's going to.....early!! I am almost paranoid if I'm ever late for anything. Years ago, my best friend Jim & I used to meet at a local coffee shop back in Stratford Ontario a couple times a week. We did this for about 5 years. Our meeting time was always the same...7 p.m. My arrival time was always the same as well...6:55 p.m. Jim's arrival time never changed either & he always showed up at precisely 7:05. Nothing was ever said in all those years about being early or late. We used to talk about every imaginable thing under the sun except, why was I always early & why was he always late. Sometimes, there are just some things grown men don't talk about!!

Jeanie & Ray really have a nice ranch here & they pretty well have built it from scratch all by themselves over the years. Ray helped guide the rig as I backed it into a pre-determined spot. For the first time in over 50 days we are actually going to have electricity, a water hook-up, & asewer connection. Gonna take us awhile to get used to all that 10-4. I had to even think for a minute which bin door to open for the electrical cord. It's amazing how these aging brains forget things if it's not repetitive. 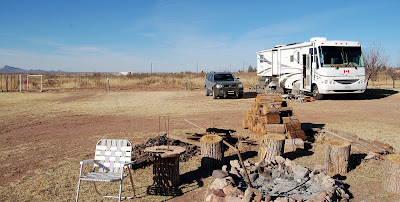 OUR NEW DIGS AT THE RANCH

There are 3 donkeys, 2 horses, about a dozen chickens complete with a rooster, 2 outside cats, 1 inside cat, 2 resident dogs, & one part time dog. With our 3 dogs we knew it could be quite a circus once we got here but Jeanie said not to worry about it. Jeanie is a dog whisperer & knew how to introduce all the critters to each other. Everything went off without a hitch except when little Cora thought she could just waltz right into the donkey corral & straighten those guys right out. Well, it was a close call for the little Motormouse when the donkey's turned the tables on her & chased her around the pen. Jeanie had to swiftly intervene & quell the troubled waters by quickly hoisting the shaking little motordog over the fence to me. We won't have to worry about her bothering the donkeys again!!

I'm not very good at remembering names but here goes....The donkeys are Poncho, Sarah, & Nellie. The 2 resident dogs are Gleeson & Pearce. Indoor cat is Mattie while the 2 outdoor cats are Charlie & Bob. Corky is a neighbor's dog that comes for the day a couple times a week. I have forgotten the 2 horses names & don't even ask me about the chickens names. Cluck, Cackle, & Peck, comes to mind for 3 of them though. I'll ask the 2 horses to write their names down for me to-morrow. Can probably do that after we get the chickens milked & the donkey eggs picked up.

Once Jeanie & Ray leave for some well deserved holidays in their RV next week it will be our job to feed all the critters every day & attend to some watering issues. Because of the cold temps at night here the outside irrigation & barn water has to be turned off at night & back on in the morning so we will be responsible for doing that as well. Our presence here will also be security. The entire property is fenced in with a locked gate at night. The Mexican border is 20 miles to the south.

I didn't take many pictures to-day because our time was spent with Jeanie & Ray learning the ranch chores but as we go along in the next little while I'm sure I'll get some nice portraits of Cluck, Cackle, & Peck. Also looking forward to the thousands of sand hill cranes who make this area their winter home. Lots of wintering birds on the property too. It's a beautiful part of the country down here in southeastern Arizona so we're looking forward to getting out & seeing as much of it as we can over the next number of weeks or so. I'm sure the camera's will be working overtime again so stay tuned as The Bayfield Bunch turns another page in their endless book of everyday adventures..............................

OUR FIRST LOOK AT SOME SAND HILL CRANES

No photos for the web album to-day.