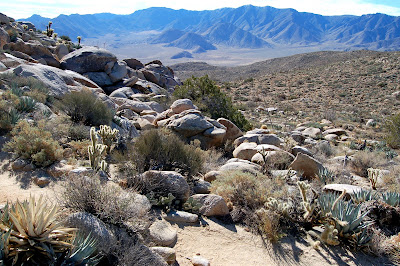 A VIEW FROM GHOST MOUNTAIN

Kelly's ankle is slowly on the mend (we hope) but she still has to use a borrowed cane from JoAnn to get around. She is able to hobble on the front end of her foot but the heel & ankle are still pretty sore. Had wrapped it last night for support so she has decided to leave the wrap on for a few days. We still have no idea what happened.

I remembered to put a photo in last night's blog of an egg pocket but forgot to put in a description. Kelly says it's puff pastry that is filled with a sliced ham, cheese, & egg combination. The corners of the pastry are then drawn up somehow & fastened into a pouch.....or pocket. I guess it is then baked or something. Anyway, sure tastes good:))

Another sunny start to the morning as we scurried around (well, I scurried & Kelly hobbled) getting things ready for our trip over to the Blair Valley & Ghost Mountain. We had seen a short 15 minute movie while here last year about the Marshal South family living atop Ghost Mountain back in the 40's. We knew that a full length 76 minute documentary called, The Ghost Mountain Experiment had also been completed but hadn't seen it. By co-incidence, the producer of that documentary movie, John McDonald had come across our website awhile back & noticed my interest in the Marshal South story. He noted that in my blog a few days ago I mentioned about coming out to Ghost Mountain one day this week. We received an email from John saying he was going to be in the area to-day (Thursday) & would we like to meet him out at Ghost Mountain. You betcha!!

It's about a 40 minute drive from Borrego Springs, through the Yaqui Pass & across the Blair Valley to the foot of Ghost Mountain. Ghost Mountain isn't really what you think of as a big mountain with a peak on it. The South family referred to it as the hill & the Indian legends referred to it as a mountain. Regardless, it's a mile from the parking lot to the ruins & a lot of that is going up on a very steep angle. Certainly a good rock scramble. 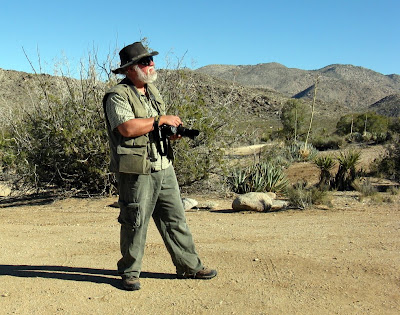 LOOKING AT THE LONG RUGGED PATH AHEAD

It was an absolutely beautiful morning as we turned off the highway into the desert & bumped along the long & winding dusty road leading to the foot of the mountain. To my relief, nobody was there. Just us, the birds, the desert, & the mountain. Kelly brought a comfy lounge chair along as well as her book because there was no way she could hike on her sore ankle. There was enough shade there from some shrubbery to put the chair under. I slipped on my photo vest, hung the cameras & binoculars on myself & started up the rugged trail for my second visit to Ghost Mountain & the ruins of Yaquitepec, the Marshal South home. Doesn't take long for the hill to get you puffing as you scramble upwards along the narrow rock strewn path. I was so happy to be once again returning to a place that I had found very special just over a year ago. With each step the view out over the Blair Valley just gets better & better. The trail has many switchbacks before reaching a level plateau. From this plateau you can see for miles to the southeast towards the Butterfield Ranch & Vallecito Stage Station & countless miles beyond that to another distant mountain range probably a hundred miles or more away. It was down this valley that the old Butterfield Stage used to run. The walk across the plateau brings you to what looks like an impossible steep boulder climb to another high ridge but the path weaves it's way though the rocks gently taking you ever higher. Some of the rocks look like large stepping stones as you scramble over the them, but the footing is solid & you just keep going. The scenery all around you is too beautiful to even think about not going any further. it's a rare beauty & one that you most often won't see anywhere else. Large smooth boulders, green Agaves, cactus, a fine sandy path, & huge blue mountains on the horizons. And soon........you are at the top, & the ruins of Yaquitepec slowly come into view. 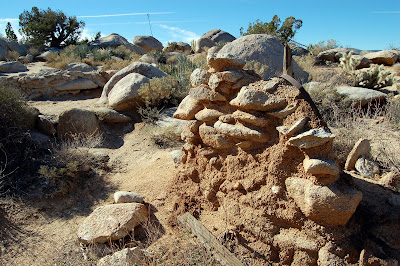 PART OF THE KITCHEN WALL

It's the old wooden framework that I saw first as I once again approached the home of the Marshal South family. The silence was broken only by the occasional bird as I stood there in the kitchen area of a story that has touched my heart ever since I first went there. Put my cameras down & just slowly let all the memories come into my mind from the book I was reading exactly one year ago at this time. I think it was the way Marshal South described the Christmas's they had on the mountain that touched me the most. He wrote in such a way as to paint pictures in one's mind & it was those pictures I was seeing as I stood there amidst the ruins to-day. 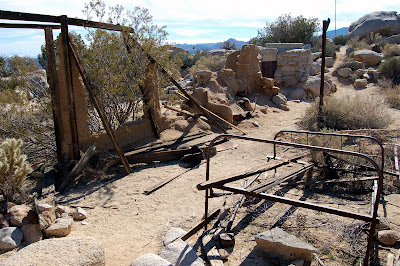 SOMEDAY THE ONLY THING LEFT HERE WILL BE THE MEMORIES

I heard some voices after awhile & noticed an elderly couple making their way up the path so I knew it was time for me to go. It was time for someone else to feel the happiness & the loneliness of Yaquitepec & I didn't want to spoil their special time. Glanced at my watch & realized I had been there with my memories for over an hour. Before starting down I walked over to the edge & noticed far below in the parking lot that John McDonald & his wife Lydia had arrived so I had to crack on some speed. Twenty minutes later I was shaking hands with the man who produced the documentary & the lady who wrote it. What a privilege that was for me. Another RV couple was there as well & we all had ourselves a good chin wag about the whole Ghost Mountain Experiment. Kelly was busy snapping pictures, sore ankle & all. John autographed a copy of the DVD for us & then we all took a tour of his Teardrop Camping Trailer. Check the photo album:)) Some more stories, some more questions, some more laughs, then it was time to go. It was a nice way to end the day for us & we met some charming people along the way. We all said our good-byes as John & Lydia headed off in their Honda Pilot with the Teardrop camping trailer in tow. The other couple headed for their RV in preparation for climbing Ghost Mountain.....and Kelly & I wended our way back through the Blair Valley, over the twisting Yaqui Pass, & through Borrego Springs to our temporary little home in the desert. 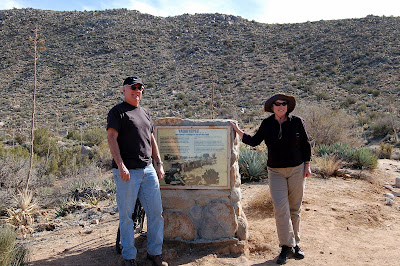 As soon as we finished supper we sat down & watched John McDonald's production of, The Ghost Mountain Experiment. Having just walked through the ruins of Yaquitepec only hours before, the documentary came alive for me in a very special way. There on the screen was old movie footage of the Marshal South family as they were, over 60 years ago. And there was Rider South, now an older man, walking through the ruins of Yaquitepec for one last time. John interviewed Rider several times at his home in Silver City NM a few years ago & the documentary has Rider talking of his memories of those days growing up so long ago atop Ghost Mountain. This is a very well done documentary & both Kelly & I really enjoyed the whole movie. It will be the first DVD I play on our 42" screen when we get back to Canada too. 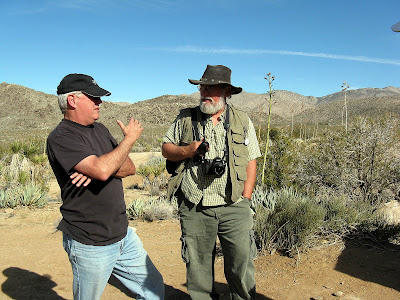 TALKING ABOUT, THE GHOST MOUNTAIN EXPERIMENT

And late this afternoon I had my first encounter with a large Tarantula spider!! 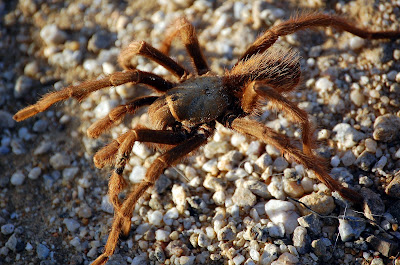