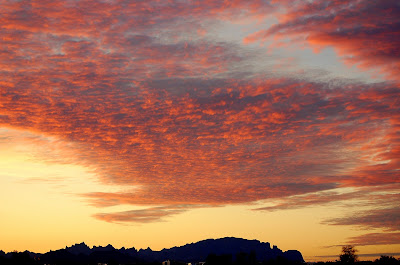 MONDAY MORNING SUNRISE
Last year we had a lot of big winds blowing through here in the night disrupting our sleep but this year the old north wind is behaving itself, but the coyotes aren't. As soon as darkness descends, the yipping & howling begins. Most of the RV's here are east of us with a few to the south & some to the north. West of us is wide open desert for miles, and that's where the coyotes are.....lots of them. Within about half an hour of sundown we could hear them very close behind our unit last night again. Maybe 50 yards of so. Maybe less. Shone the flashlight into the blackness hoping to see some shining eyes but they were too clever for that. We always hear them but we never see them. They hang around all night sometimes really yipping up a storm, & that sets Checkers off which in turns wakes me up. Max & the Motormouse aren't bothered by the Coyote sounds but Checkers does a lot of growling & barking. So, the last couple of nights have not been good for sleeping.

I had myself psyched up for the trip into Quartzite this morning. I wasn't going to let thousands of people, hundreds & hundreds of vendors, traffic jams, or jostling line-ups bother me. No sireeeee, I was up for the challenge.....but then we got there!! We were at Tyson Wells before the vendors were open but still had trouble finding a parking place. The vendors opening time was 9 p.m. but only about a third of them were sleepily getting up to speed so we just kind of slowly ambled around. I'm not good at slow ambling!! By 9:30 things were gearing up & people were rolling in. We found what we were looking for at the flag pole place but then began the long slow ordeal of browsing. I'm not good at browsing!! I can get out on a rough hiking trail & go for a long ways for hours without tiring or so much as stopping for a drink of water, but shift me into browse/shopping mode & I'm toast within half an hour. I have a theory as to why that happens. Walking slow for hours with numerous stops to look at stuff & long periods of standing in one place waiting for a spouse is hard on the legs. Weight & pressure is held longer on each leg joint causing early stress to all areas of the limbs & therefore, the mind. It seems to be a common affliction that affects only males who are in the company of a woman at the time. There has been no recorded history of a woman ever having this problem either by herself or in company of others. And strangely enough, men on their own looking for an item or out to buy something rarely suffer from this either. They know what they want, they know where to get it, & they know enough to clear the area as soon as they have what they came for. Believe me, I know of these things!! And that's my theory & I'm sticking to it!! 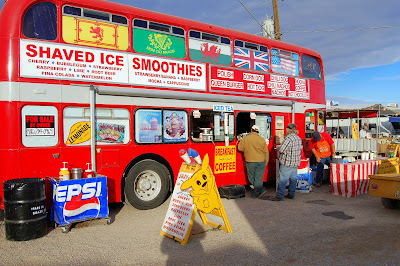 THIS WAS MY BREAKFAST STOP

After trudging along up & down aisles & aisles of vendors for what seemed like hours we finally made our way over towards the Big Top area. I was in there on opening day last year so knew enough to stay well clear of the place. If you have a strong need to be trampled, the Big Top is for you!! Had a look at some RV's & as much as we prefer motorhomes, the 5th wheels do have the nicest floor plans. We had a fifth wheel 2 years ago but find the motorhome much more convenient. Made our way around the outside of the Big Top to the vendor Kelly got the windshield sunscreens at yesterday. They also had pre-made sun visor material for motorhomes as well so we picked up two. Kelly couldn't remember where the sun screen vendor was at first so that cost Al's legs some more of that stress stuff. You remember the theory, right!!

Grabbed a quick bite & even managed to find a table & chair to sit down & eat it at. But only briefly. Chairs were at a premium & Seniors waiting for them were beginning to look downright dangerous. We had just passed a booth where they were handing out gun licenses for concealed weapons & by the looks on some of those older folks faces I'm sure they were concealing more than guns!! 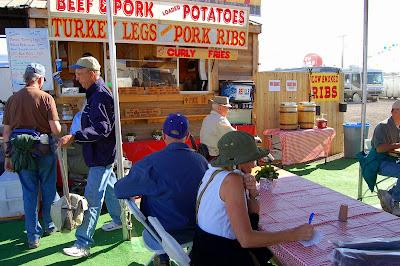 KELLY'S ON THE CELL PHONE TAKING A RESERVATION FOR DEERPARK LODGE

Made our way back to the parking lot........& then came the traffic jam. We were bumper to bumper & it took us about 20 minutes to go a block & a half. Was glad to reach the highway & make the right hand turn out of town. Traffic was fine going south for us but traffic heading northbound into Q was bumper to bumper for about 2 miles out of town. Oh well, better them than me.

Soooooooo glad to be out of the Quartzite crush & back out to the desert & our rig. Time elapsed....3 whole hours. Spent the rest of the afternoon resting my legs, snoozing, reading & trying to restore my mind back to something resembling normal. A 20 Borax mule team couldn't drag me back into Quartzite again, but of course, Kelly, being a woman, is heading right back in there again in the morning. What was the name of that book a few years ago, Men are from Mars & Women are from......WHERE!!!! 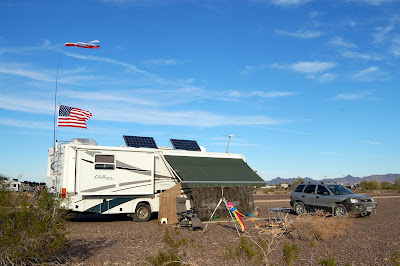 FLAG POLE IS UP